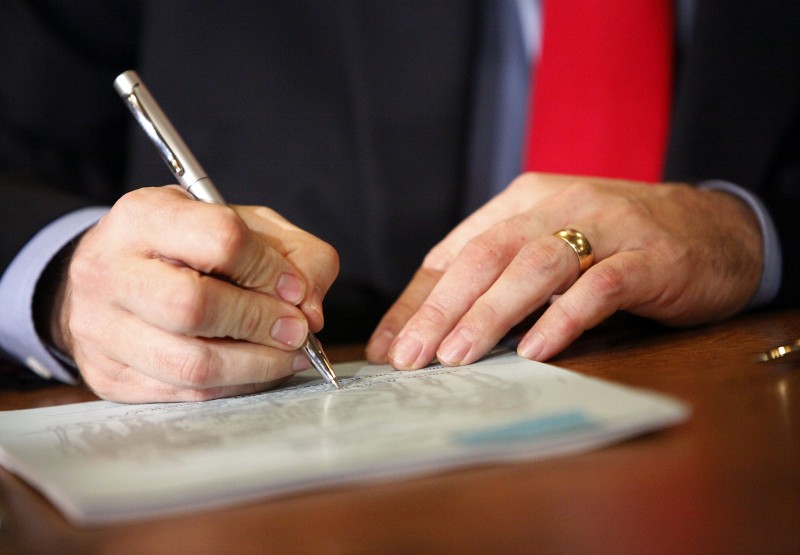 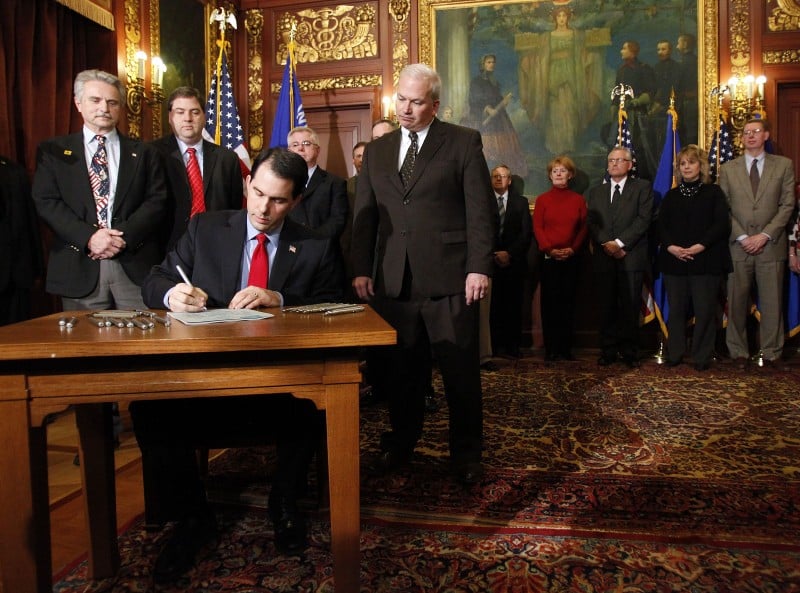 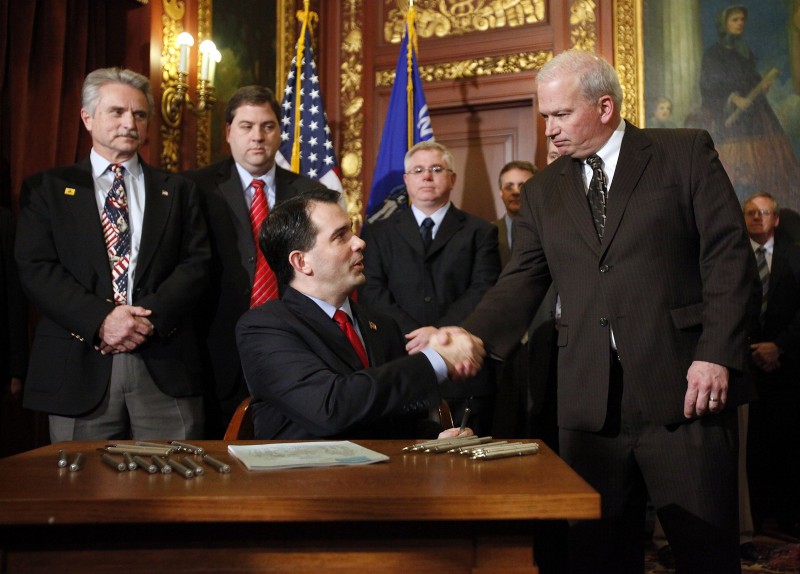 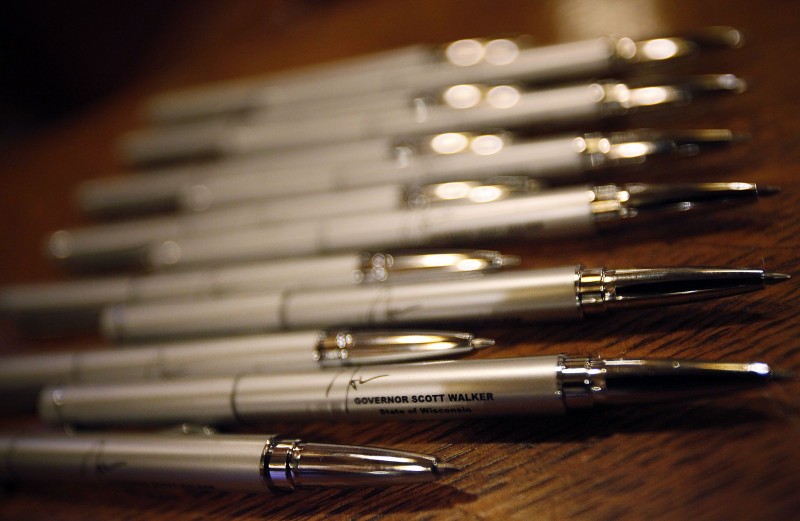 Pens sit ready to be used by Wisconsin Gov. Scott Walker to sign a copy of the budget repair bill during a ceremonial bill signing at the state Capitol on March 11, 2011.

Walker signed the bill early Friday, but laws don't take effect until one day after the secretary of state publishes it with the Legislative Reference Bureau. La Follette said he would not publish the law until March 25 to allow time for legal challenges to move through the courts.

Dane County Executive Kathleen Falk and County Board Chairman Scott McDonell sued Friday to prevent La Follette from publishing the measure, saying the votes leading to the law's passage were illegal and the bill is unconstitutional.

Dane County Circuit Judge Amy Smith declined to issue a temporary order preventing La Follette from publishing the law. But she scheduled a hearing on the matter for Wednesday.

La Follette, a Democrat, said in an interview it is normal procedure to publish laws 10 business days after the governor signs them — the requirement under state law — although he said it is sometimes necessary to speed up the process.

"The governor wants to publish this on Monday, but that seems a mad rush to conclusion when there are so many questions," La Follette said. "This is one of the biggest changes in Wisconsin I can remember, and I've been around for 30 years."

Also Friday, the governor rescinded his order to issue layoff notices, which threatened the jobs of about 1,500 state workers. He repeatedly said if his bill did not pass, he would be forced to lay off workers to make up the money.

Legal questions aside, Friday's bill signing ended a month-long stalemate over collective bargaining that captured the nation's attention and brought state government to a halt.

For a month, protesters — many days numbering in the tens of thousands — marched on the Capitol in opposition to Walker's historic attempt to essentially end collective bargaining for most public employees.

Three weeks ago, all 14 Democratic senators fled the state in an effort to stall a vote on the bill. Sen. Fred Risser, D-Madison, said Friday his colleagues may have lost the legislative battle, but the war is still ongoing on the "legal front and electoral front."

This morning, the "Wisconsin 14" plan their first joint appearance in Wisconsin since they left the state, with a news conference at Monona Terrace at noon. The group then plans to join protesters at the Capitol for an afternoon rally.

Sen. Chris Larson, D-Milwaukee, said he was deflating his air mattress Friday and getting ready to head home. He called the bill signing a "tragedy."

On Friday, Walker said he was not worried about the legal challenges to the bill.

He said its passage shows Wisconsin has the courage to make tough choices. Before the vote, Walker said he met with lawmakers to deliver a pep talk.

"Your best days will be every day after this bill passes," Walker said he told them.

Juneau, said the new law will help working families in the state.

"There are still real people suffering in this economy, even though the labor unions ' bullhorn has drowned them out in the past few weeks," Fitzgerald said.

"But behind the chants and the chaos, there are still hundreds of thousands of Wisconsinites who are out of work, struggling to make ends meet, and anxious about next week and next month."

Demonstrators — 85,000 to 100,000 strong — turned out in force again Saturday for what Madison police say was the largest crowd in three weeks of protests against Gov. Scott Walker's budget repair bill.

Pens sit ready to be used by Wisconsin Gov. Scott Walker to sign a copy of the budget repair bill during a ceremonial bill signing at the state Capitol on March 11, 2011.