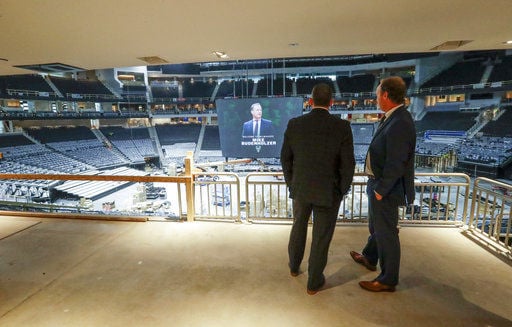 In this May 21, 2018, file photo, Milwaukee Bucks new head coach Mike Budenholzer talks to general manager Jon Horst after a news conference in the team's new arena in Milwaukee, the Fiserv Forum. 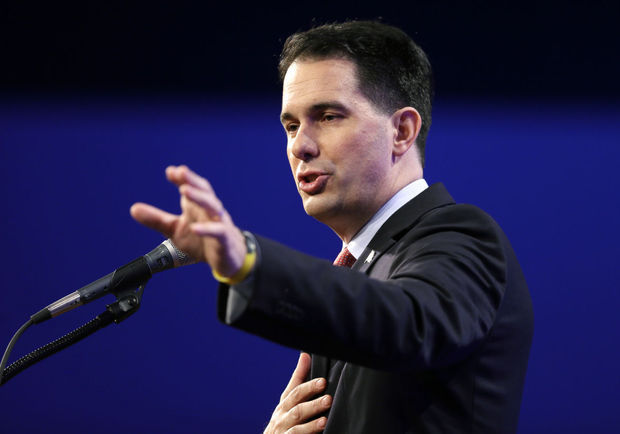 When Milwaukee's newest sports arena opened last month, Wisconsin Gov. Scott Walker promised that state taxpayers would earn a rich return on their investment in the $524 million Fiserv Forum, where NBA games will be played.

Walker championed the deal to help the Milwaukee Bucks owners build a new arena in 2015, when some criticized him for committing $203 million for the arena while trimming other parts of the state budget. The rest of the sports complex was paid for with private funds.

In a statement issued the day of Fiserv Forum's grand opening, Walker said the state will earn a nearly 3-to-1 return on the money spent for the arena.

A look at his claim:

WALKER: "The state is estimated to receive $2.99 for each dollar invested into building the new arena."

THE FACTS: In making his estimate, Walker omits some of the state money spent on the 20-year arena deal and relies on income tax estimates that experts call unreliable.

For Wisconsin taxpayers to get $2.99 for every dollar spent on the arena — nearly triple the state's investment — the Bucks arena would need to generate $460 million in state tax revenues over the next two decades.

But the governor sets the bar lower in his calculation. He only counts half of the state's investment — $80 million of it — and predicts the state will get $299 million in income taxes thanks to the arena. His math predicts taxpayers would actually get as much as $3.70 for every dollar spent. But Walker's office says the governor is using a more conservative estimate of a 3-to-1 return.

What Walker leaves out is a second $80 million state contribution. His office says he did that because that money comes from a fund that distributes cash annually to Wisconsin counties. The state will deduct $4 million every year from its regular payment to Milwaukee County and dedicate that money to the arena instead. That adds up to $80 million over 20 years.

That part should be considered in Walker's calculation, said Allen Sanderson, a sports economist at the University of Chicago.

"The money is money; it doesn't matter how you carve it out," Sanderson said.

Economists also took issue with the tax revenue estimates Walker says the state will earn from the arena.

Walker bases his claim on 2015 tax collection projections from the Wisconsin Department of Revenue Secretary Richard Chandler, his office said.

Chandler estimated the state would collect $299 million in income taxes over 20 years because of the arena.

Using estimates from previous years, Chandler predicted that if the Bucks stayed in Milwaukee for the next two decades, the state would collect at least $130 million in income taxes from the Bucks and other NBA teams. (Athletes must pay income tax in any state where they play that collects such taxes.) He also predicted that NBA salaries would grow significantly over the next 20 years and the state would get an additional $169 million in NBA income tax collections during that same time. That adds up to $299 million.

So far, Chandler's estimates are on track. But multiple economists and sports salary experts who reviewed those estimates for The Associated Press warned that it's risky to predict salaries 20 years into the future.

The league's salary cap may stay stagnant or increase for a variety of reasons from year to year, said NBA salary cap expert Larry Coon. For example, an NBA lockout in 2011 shortened the season and kept the salary cap flat the following year. But in 2016, the cap increased significantly thanks to the league's new TV deal.

The NBA itself, Coon pointed out, provides salary cap projections only for a few years in advance.

"There's enough variance over time that you can't project what will happen from one year to the next — there are too many confounding factors," Coon wrote in an email.

The Milwaukee Bucks will play the inaugural game at Fiserv Forum on Oct. 3 when they open the preseason against the Chicago Bulls.

The arena will be named Fiserv Forum.

Photos: Get an inside look at the Milwaukee Bucks' new arena as it nears completion

The Milwaukee Bucks introduced the franchise's 16th head coach, Mike Budenholzer, on Monday at the nearly-completed Milwaukee Entertainment an…

In this May 21, 2018, file photo, Milwaukee Bucks new head coach Mike Budenholzer talks to general manager Jon Horst after a news conference in the team's new arena in Milwaukee, the Fiserv Forum.