From nails, shards of glass and bone, a picture of the past emerges in Portage
0 Comments
Share this
1 of 2 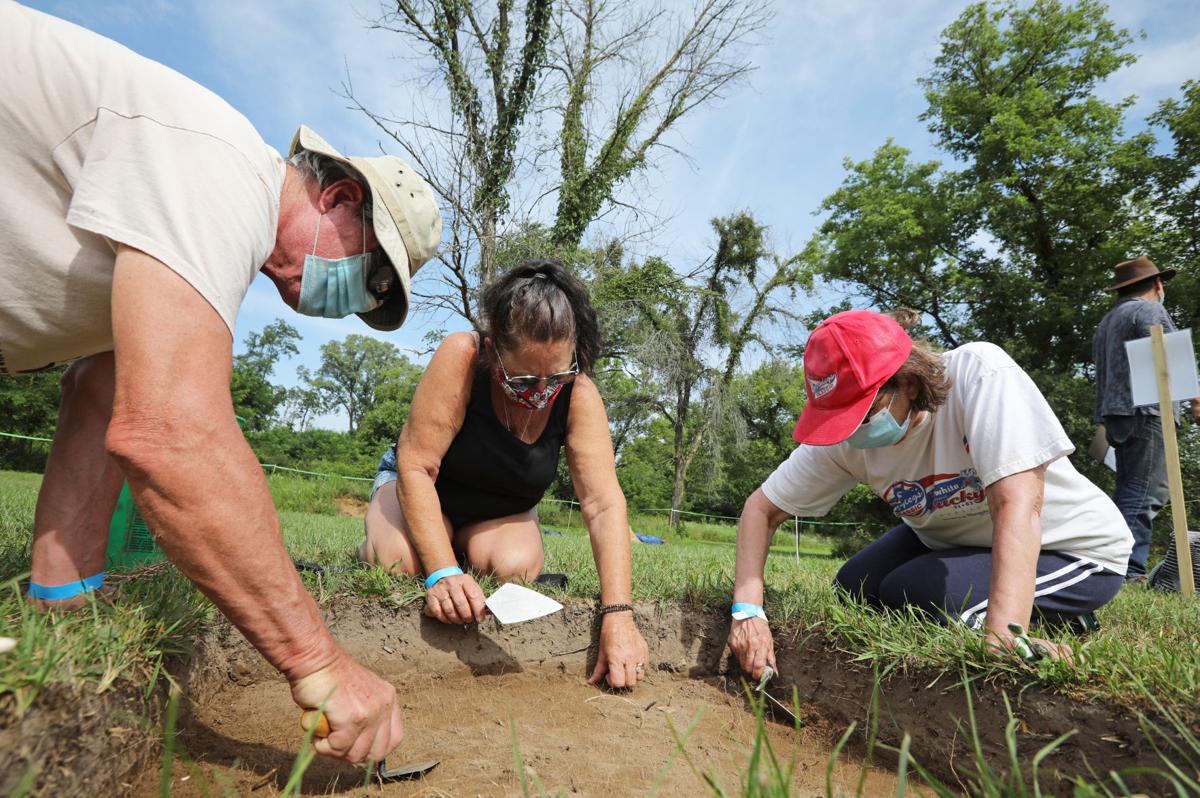 Carl Bujanowski, left, of Poynette, with his wife, Jill, right, join Gwen Heath, of Packwaukee, to search for artifacts Saturday on the grounds of the Historic Indian Agency House in Portage. The effort is an attempt to locate a blacksmith shop established in the 1830s. 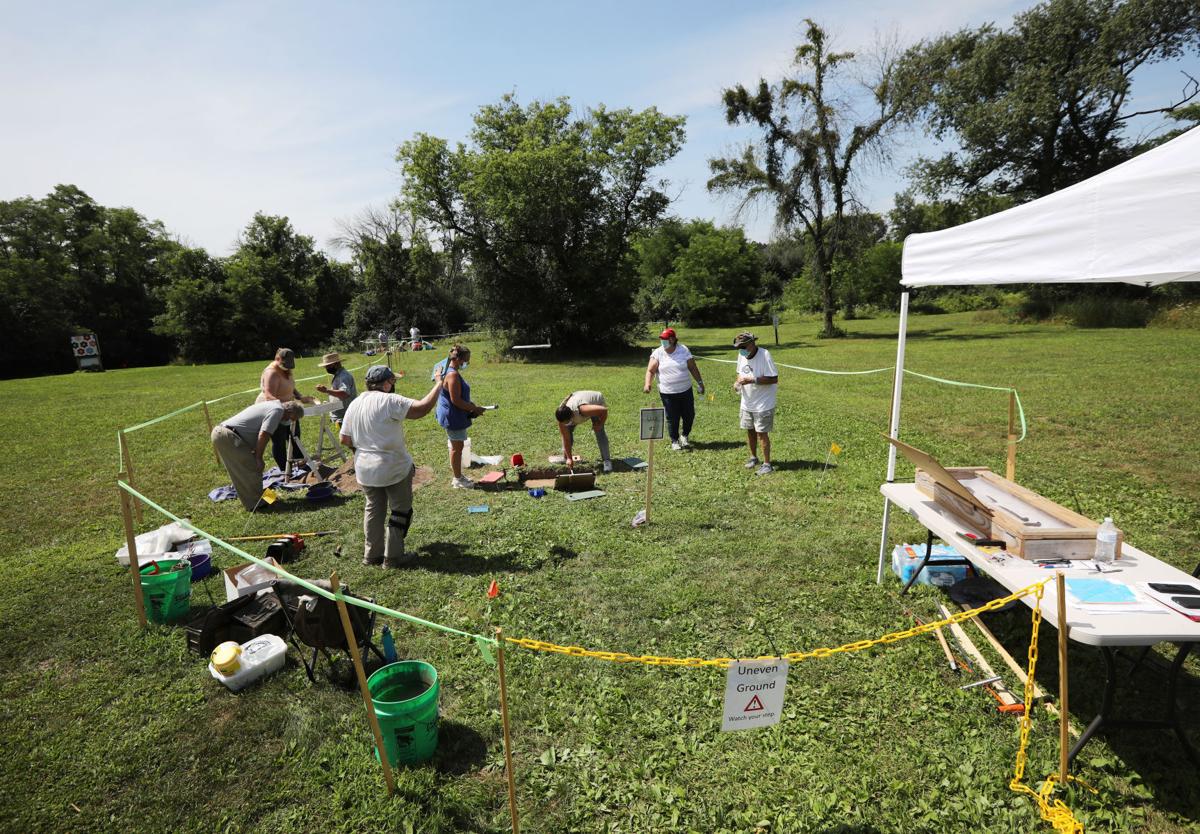 Archaeologists and volunteers have been working the last two weekends to discover artifacts near the Historic Indian Agency House in Portage. The heat and humidity added to the challenge as volunteers were required to wear masks due to COVID-19.

PORTAGE — Grace Emily Schara came from Seymour to work on a Girl Scouts badge, while Jon Van Beckum made the drive from Milwaukee in an effort to further enrich the high school history classes he teaches.

For Gwen Heath, she came to this historic spit of land after her husband, Gary, unearthed earlier this month a Native American hammer stone in the front yard of their Packwaukee home near Buffalo Lake. She was hoping a morning of digging, scraping and brushing under the watchful eyes of trained archaeologists would shed light on more potential finds at her Marquette County home.

“That’s why I’m here,” Heath said, as she showed off the ancient gray, stone tool. “One of the questions I’m here for is how deep are these artifacts.”

Turns out, not very.

A public archaeological dig Saturday at the Historic Indian Agency House revealed old nails, shards of pottery and bone, pieces of glass and chert, and a sedimentary rock used by ancient peoples to make tools and weapons. And it was all less than 10 inches into the earth.

Working in groups and in shifts in two 3-foot-square holes called units, the goal Saturday — besides staying hydrated in the oppressive heat — was to help officials here identify the location and remnants of a blacksmith shop constructed near the Agency House in the 1830s. A ground-penetrating radar survey was conducted last year by Dan Joyce, director of the Kenosha Public Museum, to identify a general area, but it was up to Connie Arzigian, a research archaeologist with the Mississippi Valley Archaeology Center at UW-La Crosse, and John Wackman, a longtime archaeologist who dug here in the 1980s, to lead the volunteer crews.

“Everything is sort of mixed together,” Wackman said of the historical record in the dirt. “You don’t have a lot of separation. It’s pretty crunched together. Most of the stuff we find is domestic material.”

In the case of the blacksmith shop, Arzigian, who is also a senior lecturer in archaeology and anthropology, said it’s unlikely there was a foundation, but perhaps there could be stone supports at each corner of the long-lost building.

“This is important because the minutia of everyday life is often left out of historical records,” Arzigian said. “This helps us better understand what was happening during this period.”

The Indian Agency House was built along the portage route between the Fox and Wisconsin rivers in 1832 to house agent John H. Kinzie and his wife, Juliette. The agency was established to fulfill an 1829 treaty between the U.S. government and the indigenous Ho-Chunk, known then as the Winnebago. The push came from the lead mining boom that caused an influx of settlers on Ho-Chunk lands, so the government chose to purchase the area from the tribe in an effort to avoid conflict. Instead of building the house at nearby Fort Winnebago, it was constructed away from the fort as a way to provide a more neutral site during negotiations.

The treaty promised the tribe a yearly annuity in silver along with blacksmith services and other goods in return for their land east and south of the Wisconsin River. All that remains of the fort, constructed in 1828, is the surgeon’s quarters, which was originally the home of Francois LeRoi and built between 1816 and 1819. LeRoi’s home was ideally situated between Green Bay and Prairie du Chien and purchased by the Army in 1828. The building is one of the oldest in the state.

The Agency House is also among the oldest in Wisconsin, joining others like the Tank Cottage, constructed in 1776 in Green Bay; the Strange Powers House (anywhere from 1805 to 1818) and the Francois Vertefeuille House (sometime between 1810 and 1820), both in Prairie du Chien; and Henry Dodge’s mining camp cabin (1827) in Dodgeville.

The blacksmith shop at the Agency House was established in 1830 on land that for thousands of years was traversed by Native Americans and, in 1673, by Father Jacques Marquette and fur trader Louis Joliet. Scores of other notables followed as they made their way from the Great Lakes to the Gulf of Mexico via the Fox, Wisconsin and Mississippi rivers.

“Anybody who was anybody in Wisconsin’s history came through this property,” said Adam Novey, the Agency House’s curator and executive director. “Written records alone can’t answer some important questions about how John Kinzie’s Indian sub-agency worked. Our main inquiry this season is how the blacksmith functioned.”

The 233-acre Agency House property is a bit off the beaten path and away from the city’s downtown but surrounded by a 161-acre easement established in 2014 by the Groundswell Conservatory. The easement is part of a larger effort that also includes the Ice Age Trail Alliance, which has 46 acres on the south side of the canal opposite the Agency House.

A massive oak tree that was likely a sapling when the Agency House was constructed provided plenty of shade over the house, but not for the volunteer archaeologists who worked out in the open sun and each paid $15 to take part. They were given a quick set of instructions before getting their hands dirty but, because of COVID-19, were required to wear masks. They knelt on pads and hunched over their work, using trowels to gradually scrape away layers of dirt to reveal pieces from the past.

“All of these things look like little rocks. Do I leave them there? I don’t know,” asked Cynthia Powers, a Girl Scout troop leader from Appleton.

Dirt and small artifacts were placed in plastic buckets and then sifted through a nearby screen. Anything of note was stored and labeled in plastic baggies as a permanent record from the site.

Powers was with Grace Emily Schara, 17, and Grace’s mother, Cindy. One of the reasons they chose the project was that Juliette Kinzie’s granddaughter, Juliette Lowe, founded the Girl Scouts.

“That’s why we came. (Grace) is doing her archaeology badge and Juliette Lowe probably got her adventurous spirit from her grandmother,” Powers said. “It’s adventurous to come out here. We’re moving dirt.”

Eric Kramer, 47, took part in the dig last weekend and returned on Saturday for more discoveries. For the past 16 years he has worked at the Milwaukee Public Museum as one of its lead visitor assistants.

“This is really unique,” Kramer said, as he looked at a square-headed nail that had just been found. “Think about the last person to touch that. Amazing.”

Pandemic pause: A quiet summer not the norm for amusement ride operators

With scores of canceled festivals and fairs around the state due to the COVID-19 pandemic, there is little work for those who operate traveling midways.

Carl Bujanowski, left, of Poynette, with his wife, Jill, right, join Gwen Heath, of Packwaukee, to search for artifacts Saturday on the grounds of the Historic Indian Agency House in Portage. The effort is an attempt to locate a blacksmith shop established in the 1830s. 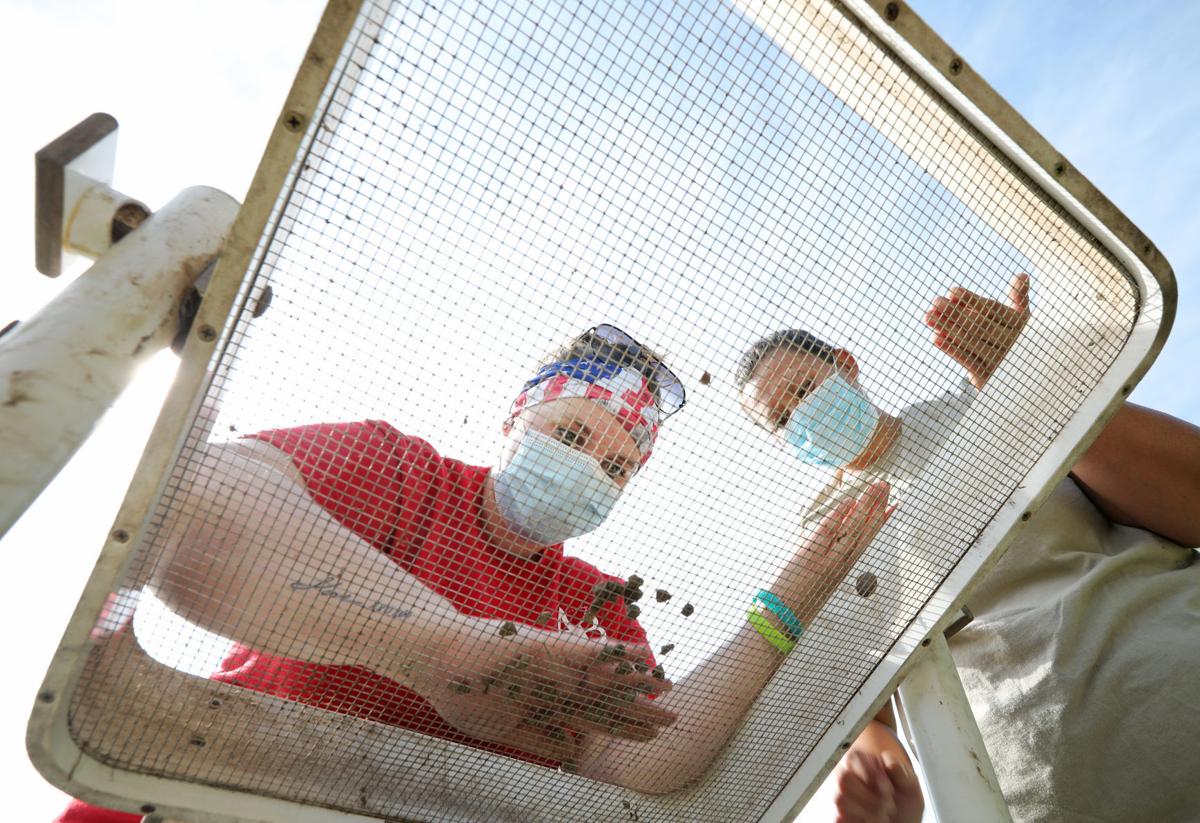 Helena Biehn, left, and Jasa Miller, both from Kenosha, use a screen to separate artifacts from the surrounding soil. The dig revealed shards of glass, bone, pottery and nails.

Archaeologists and volunteers have been working the last two weekends to discover artifacts near the Historic Indian Agency House in Portage. The heat and humidity added to the challenge as volunteers were required to wear masks due to COVID-19. 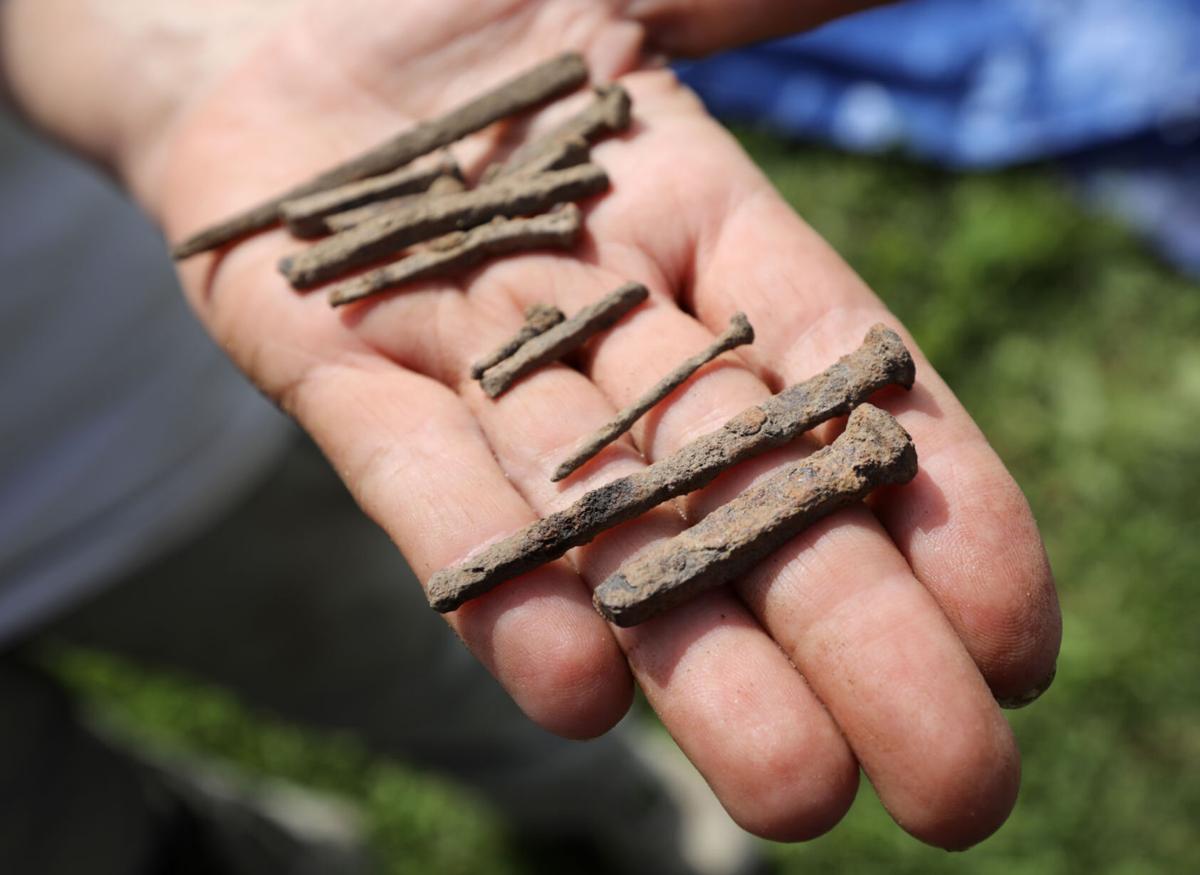 Archeologist Connie Arzigian, of UW-La Crosse, shows off some of the nails uncovered less than 10 inches below the surface. 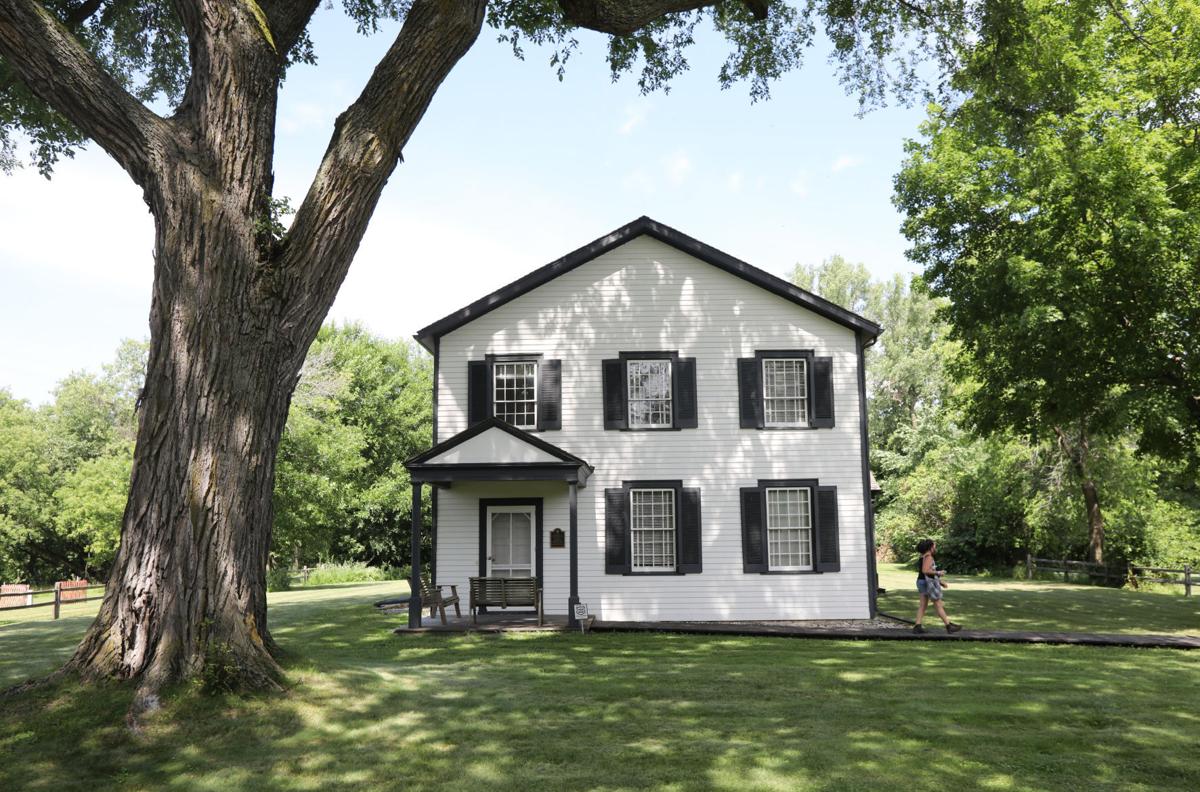 The Historic Indian Agency House was built in 1832 along the portage route between the Fox and Wisconsin rivers to fulfill an 1829 treaty with the indigenous Ho-Chunk. The house is one of the oldest buildings in Wisconsin. 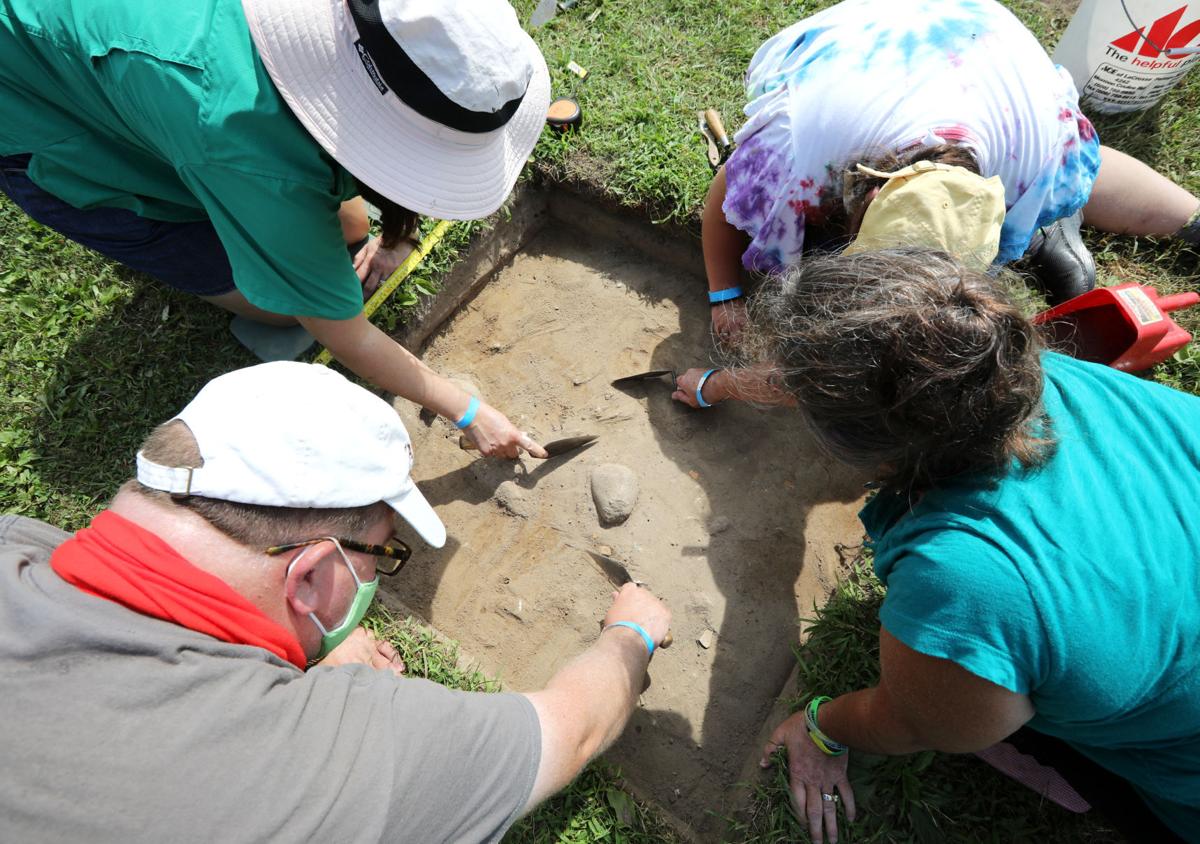 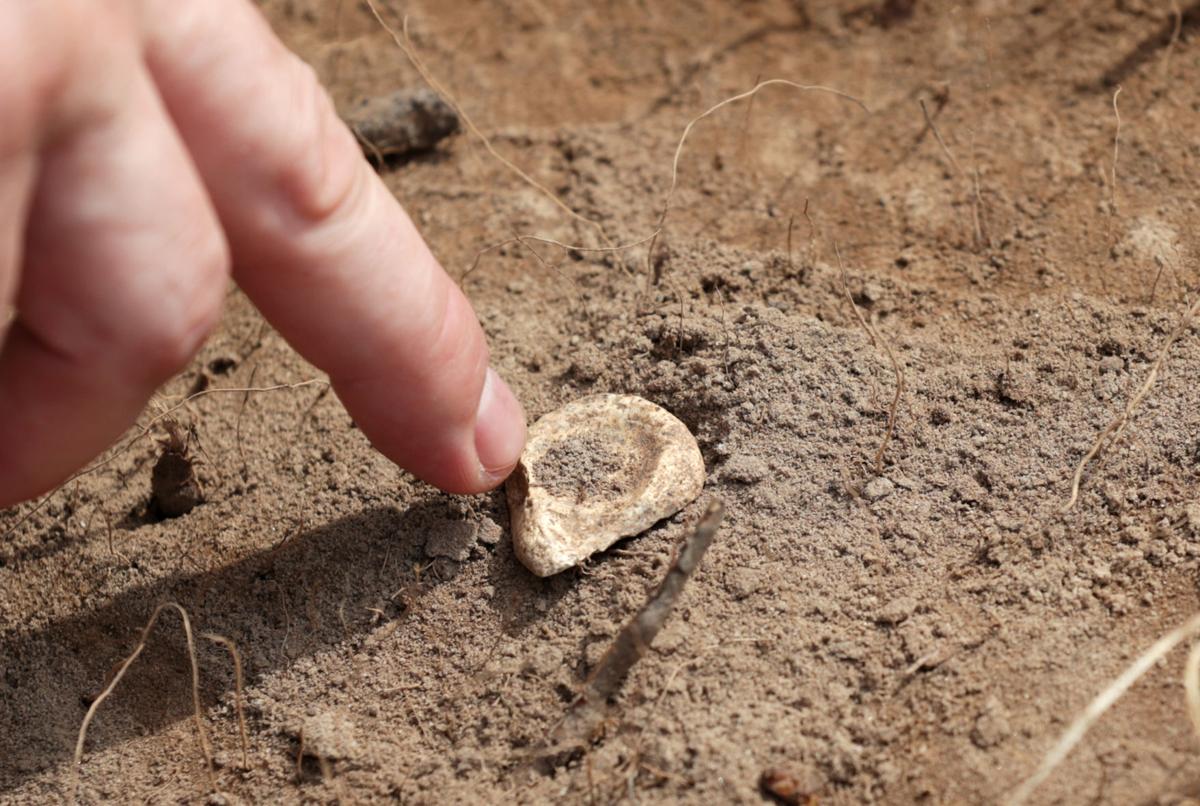 Chert, a kind of stone Native Americans used for tools and weapons, was among the items uncovered. 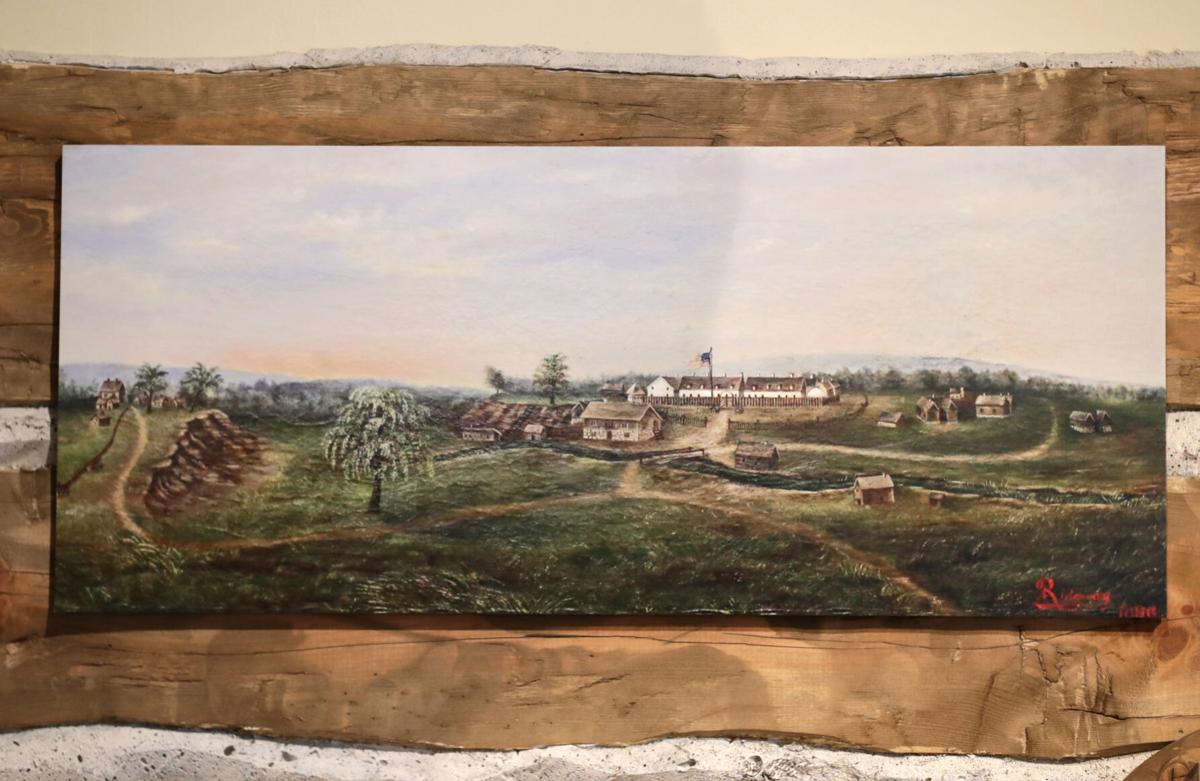