His deployment took him from port in Jacksonville, Florida, to the Mediterranean Sea near Syria and back. The military generally does not pay service members’ fare to fly home from base or port, and the purchase of a plane ticket can be daunting for someone just beginning to establish a career.

“People who don’t have a military kid don’t understand that they have to pay out of pocket for those trips,” said Eisch’s mother, Deana Dopp. “They often don’t have the money or financial status built up yet, so either the parents are paying for it or they aren’t able to come home.”

Eisch, 20, made it home because of one of his high school classmates.

Because of his high school best friend, in fact.

Ben Jackson — the middle child in a family of five, the fourth generation of his family to enlist in the military, the one who built model airplanes as a boy — died April 13, 2018, in a motorcycle crash on Misawa Air Base, about 450 miles north of Tokyo. He was 20.

The Jackson family didn’t want flowers at the funeral.

Instead, they encouraged guests to donate to the Ben Jackson Foundation, a nonprofit that has raised thousands of dollars in the past year for other young military men and women from south-central Wisconsin communities to fly home and see their families.

The New Glarus family turned their grief into a gift — one that they hope to expand.

“Our crazy goal 10 or 20 years from now is that we’d like to be able to do this for any kid in Wisconsin,” said Larry Jackson, Ben’s father.

“We’ve heard from several people that are senior enlisted leadership in the military on how stressful it can be for these young kids to be in a whole new environment without the support structure they’ve had their whole life.”

That’s what it was like for Ben when he arrived at Misawa Air Base in February 2017, his father said.

Ben hadn’t spent more than a week away from his family before enlisting. After basic training in Texas, he flew to Japan, where culture shock hit hard. The 14-hour time difference proved difficult for him to find a good time to talk with his family back home.

At the base, Ben was in the 35th Maintenance Squadron, a part of the 35th Fighter Wing, where he fixed jet engines on F-16 aircraft, Larry Jackson said.

It took several months, but Ben eventually began to feel at ease. What helped was one of his hobbies: snowboarding. He grew up boarding on Tyrol Basin, but Misawa offered him much better terrain. There, on the Hakkōda Mountains, Ben taught his Air Force friends how to snowboard.

In January 2018, about a year since Ben had seen his family, he told his dad he wanted to come home for a surprise visit.

“Say I were to come home in February for a surprise visit for about a week (shhhh),” he wrote in a Facebook message. “Would you be open to helping with the ticket?”

Larry, a project manager for Epic, accumulated many airline miles through work, so he was able to buy his son a plane ticket home.

The week home was filled with surprise after surprise. Ben arrived late one night, and after driving him home Larry woke up Ben’s younger brother, Matthew, and told him to go see who was downstairs. Then he woke up his wife and recorded her reaction on a cellphone. Sister, Emma, came back from college a day or two later.

And then, because the family kept Ben’s visit off of social media, friends and community members went through the same experience when they saw Ben around town. He even sneaked into the classroom of his favorite high school teacher and sat among the students to surprise him.

Ben’s mother, Jennifer, dropped him off at the Dane County Regional Airport to catch his 6 a.m. return flight to Japan. He expected to see his family and grandmother again in a few months for a vacation around the British Isles in June 2018. The family would end up going without him.

“I remember a lot of time we ended up sitting at a table for six and there was always one empty spot,” Larry said.

Gone in an instant

Ben messaged his dad in mid-April asking for some help on his income tax filing.

Larry messaged back that he was in New York for some meetings. What’s your schedule later today, he asked Ben.

He never heard back from his son.

Learning to ride a motorcycle had been a long-term interest of Ben’s, according to Larry. Misawa Air Base had set up a “dual-purpose” area for service members to practice riding motorcycles and for the U.S. Air Force to store heavy equipment.

The next day, seven weeks shy of his 21st birthday, Ben was practicing to earn his motorcycle permit. As he veered around a curve wearing his helmet, gloves and safety gear, Ben lost control of the bike, struck a parked forklift and was killed instantly, Larry said.

“We felt that him being able to make that first trip home was so incredible for all of us,” Larry said. “We felt fortunate that we were in a position to help him do that and we want to make sure other young military people can get home and aren’t constricted by money.”

The Ben Jackson Foundation secured $4,500 from the New Glarus High School’s Family, Career and Community Leaders of America. It has also received donations from New Glarus’ Culver’s, a Knights of Columbus council, New Glarus Brewing Co. and others.

Donations to the Ben Jackson Foundation may be made online at benjacksonfoundation.org.

To apply for a travel award, visit benjacksonfoundation.org/apply.

It has sent two New Glarus High School graduates home so far and will buy plane tickets for at least five more this year — one from Oregon High School, two from Pecatonica High School, one from Belleville High School and one from Monticello High School. The organization would also support students from four other area high schools — Albany, Brodhead, Juda and Monroe — if it receives applications from students graduating from those schools.

“It is truly astonishing to see something so positive come from something so tragic,” Chief Master Sgt. Wenesday Traylor, who is stationed at the same Japanese base where Ben lived and worked, wrote in an email. “It is uplifting and speaks volumes to Ben and his family’s character and resilience.”

Larry remembers the time around Ben’s graduation in 2016. There was the high school senior awards night, a celebratory event when scholarships are announced for students heading to college in the fall.

With no college scholarships to receive, Ben and his family skipped it.

“We think it’s important for people who sacrifice their lives to receive that sort of recognition,” Larry said.

Attendees sang of peace to honor fallen soldiers during a peace rally hosted by Veterans for Peace as an alternative way to celebrate Memorial Day. 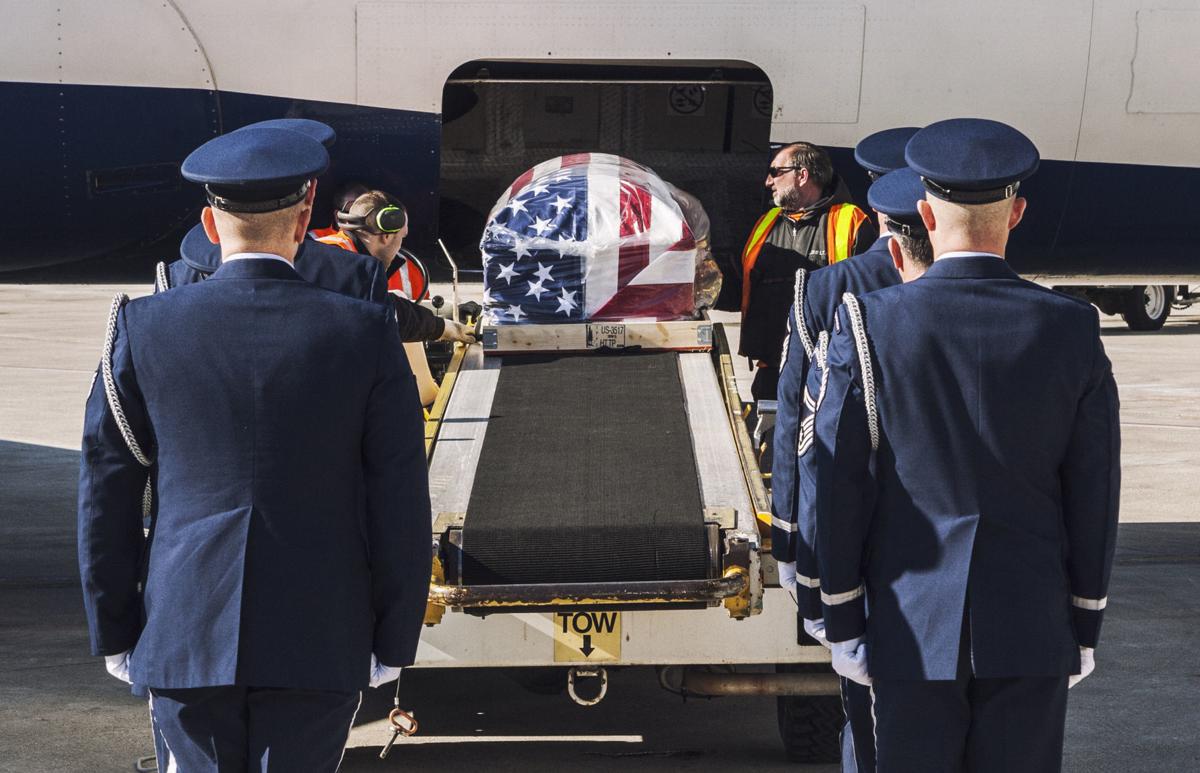 Ben Jackson's casket arrives in Milwaukee from Tokyo on April 25, 2018. In the wake of his death at age 20 in an accident on an airbase in Japan, Jackson's family has created a foundation to provide travel awards for young service members to fly home to Wisconsin. 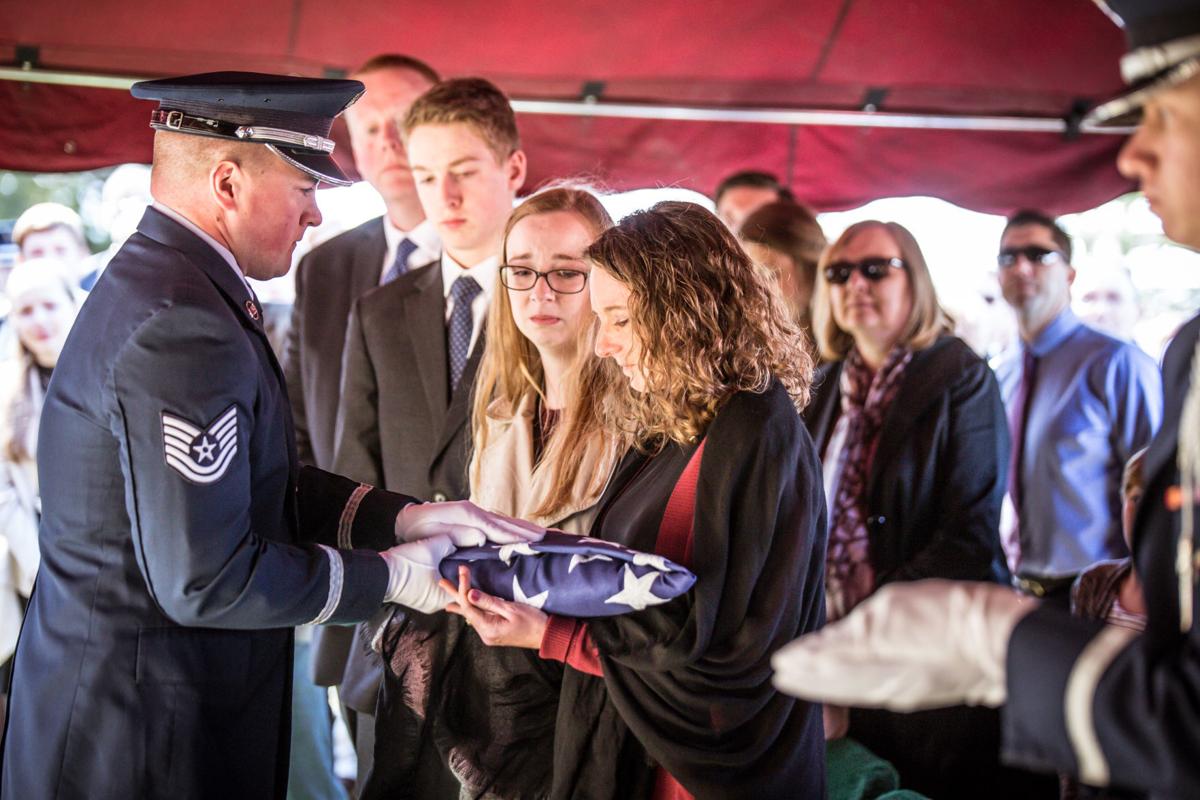 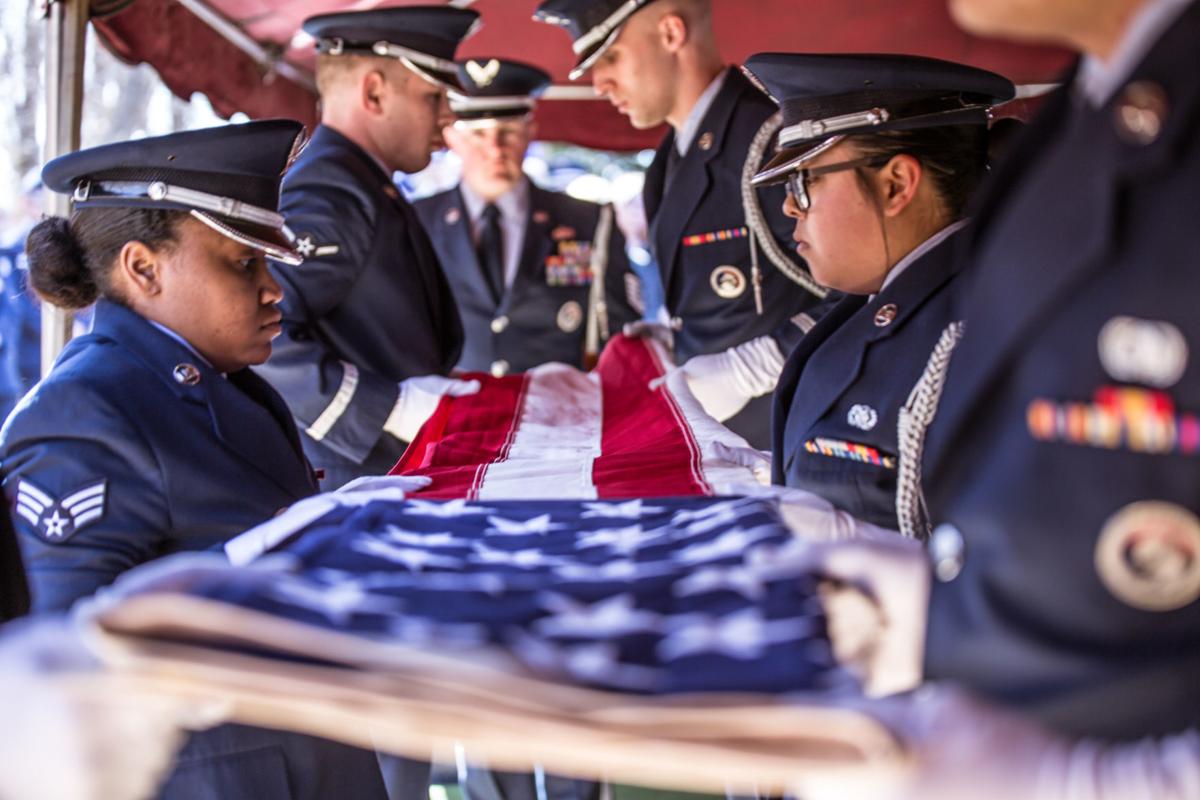 A U.S. flag is folded for Ben Jackson. The flag was presented to his mom, Jennifer, at the burial after Ben's funeral last year. 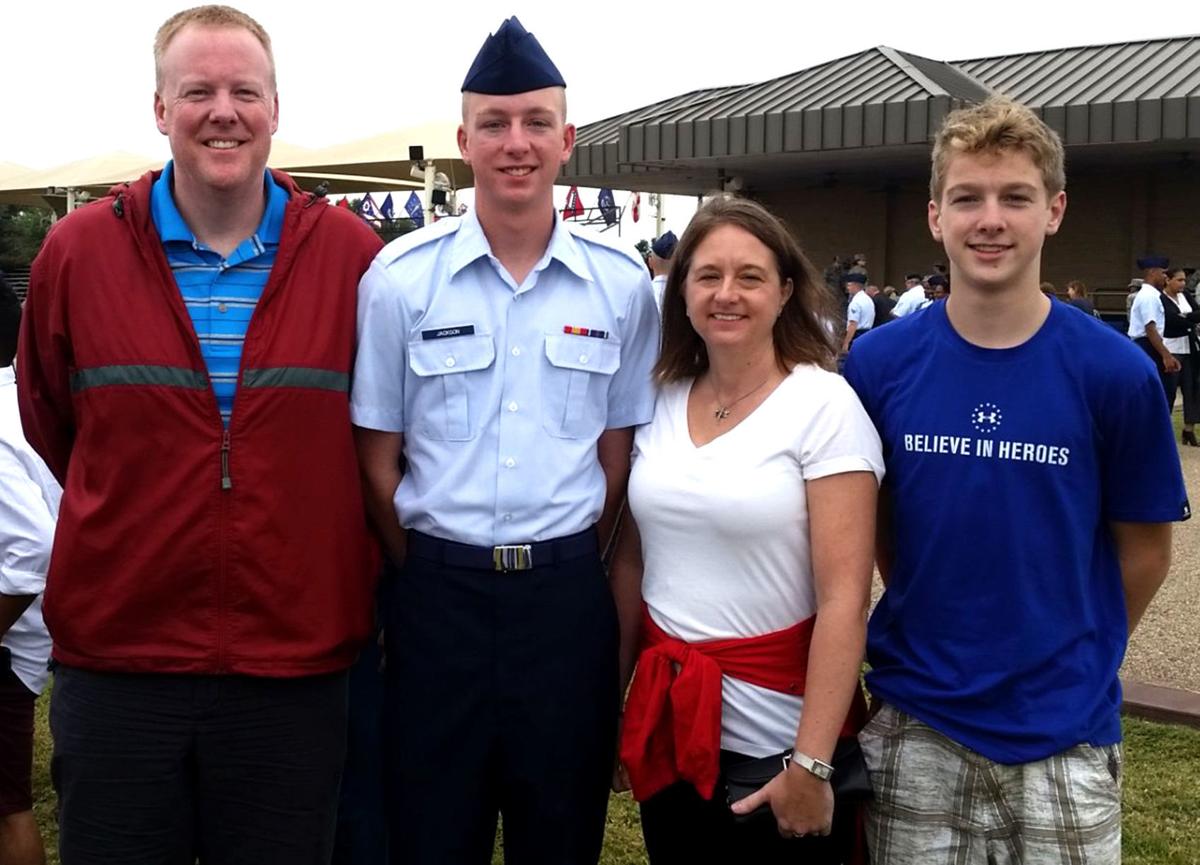 Members of the Jackson family post for a picture at Ben's graduation from basic training in 2016. From left: Larry, Ben, Jennifer and Matthew. 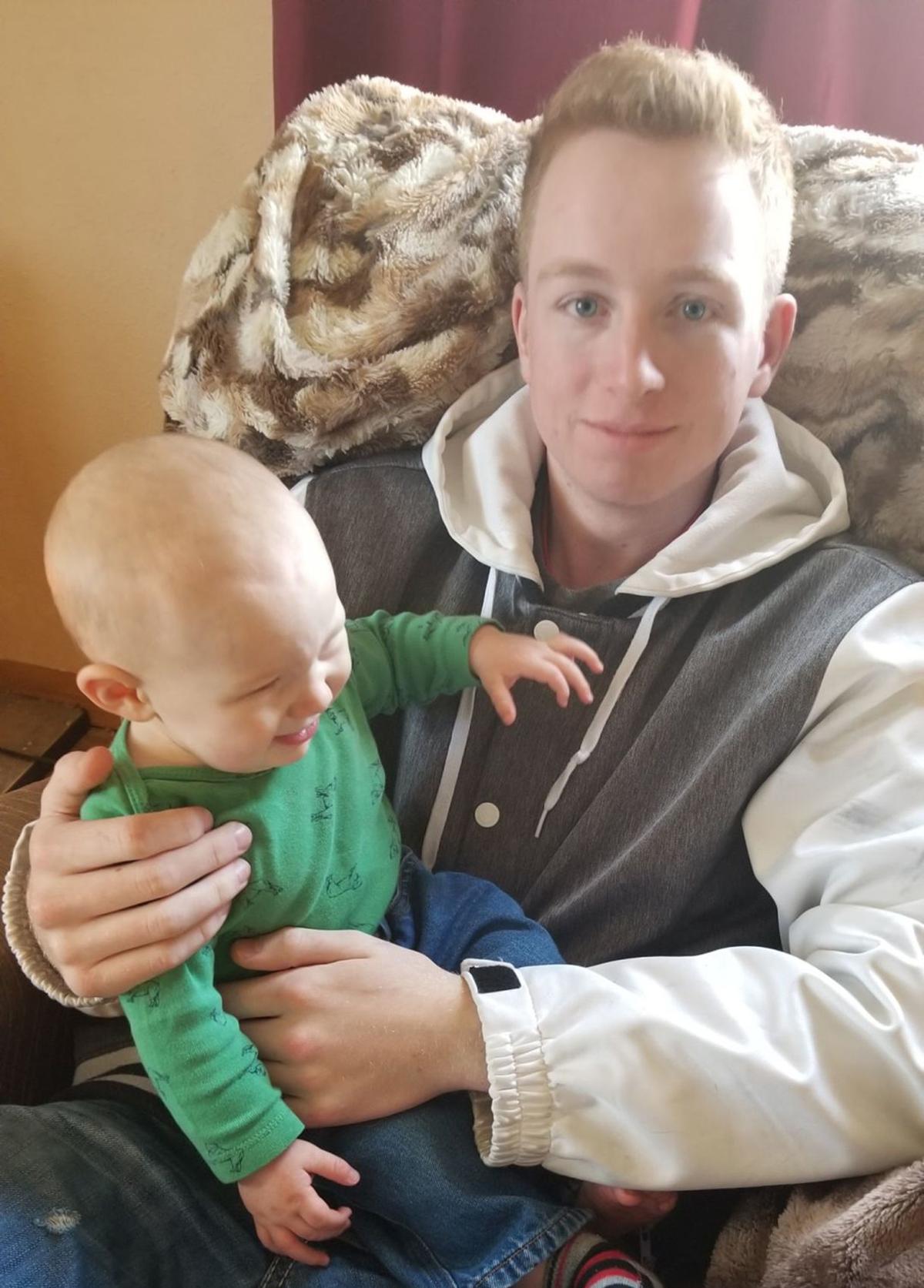 Ben holds his cousin Billy in February 2018 on what would be Ben's last trip home. 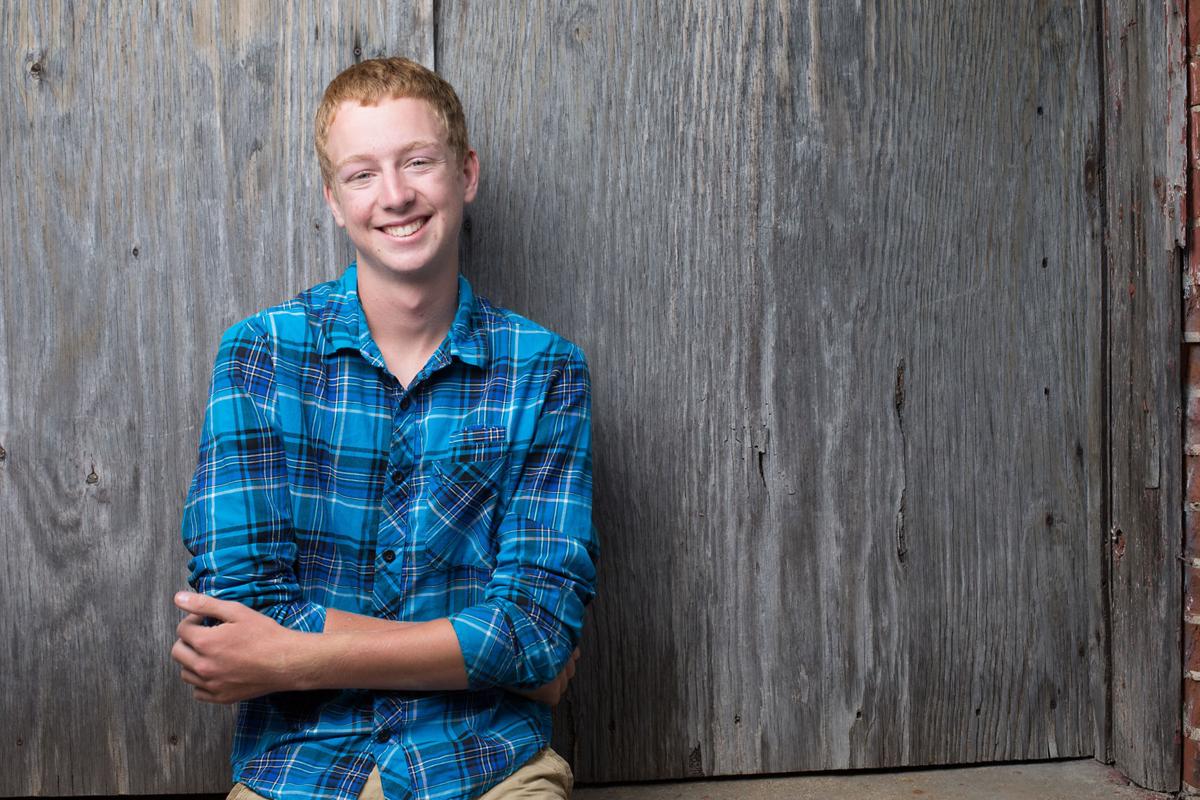 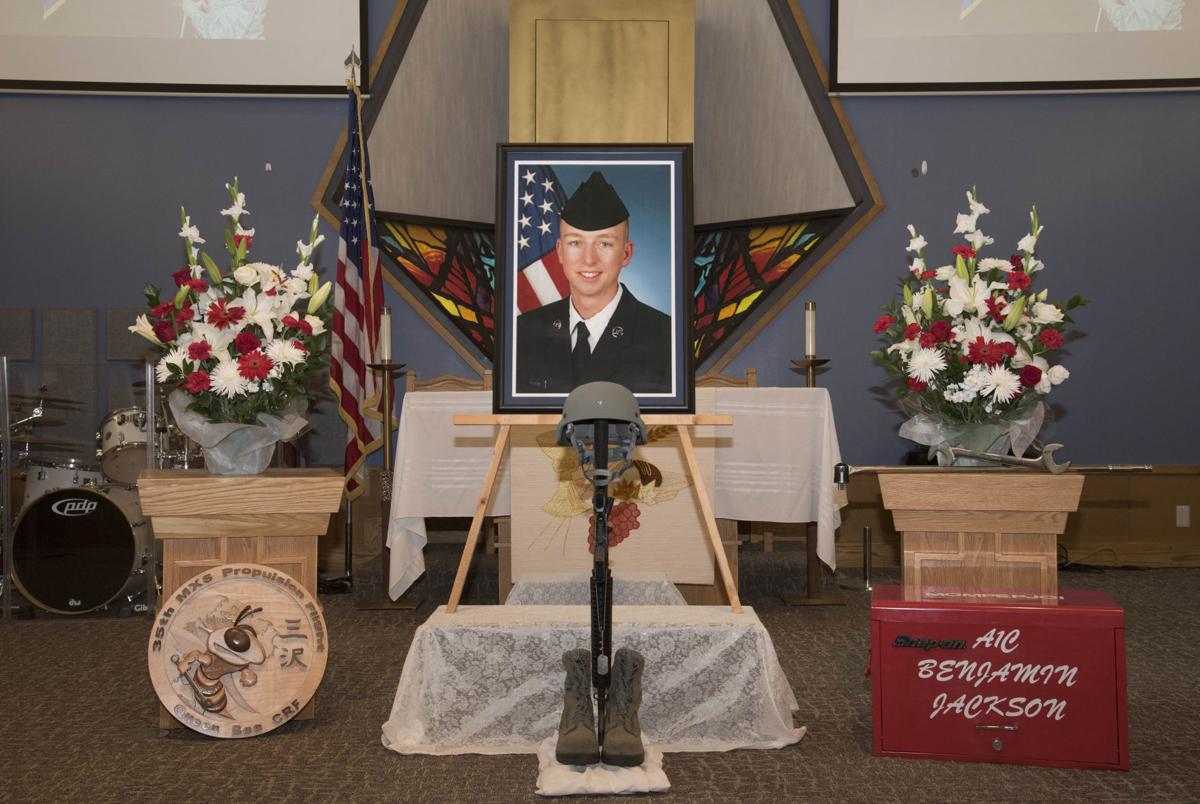 Ben Jackson's photo is displayed at his memorial service at Misawa Air Base in Japan last year. 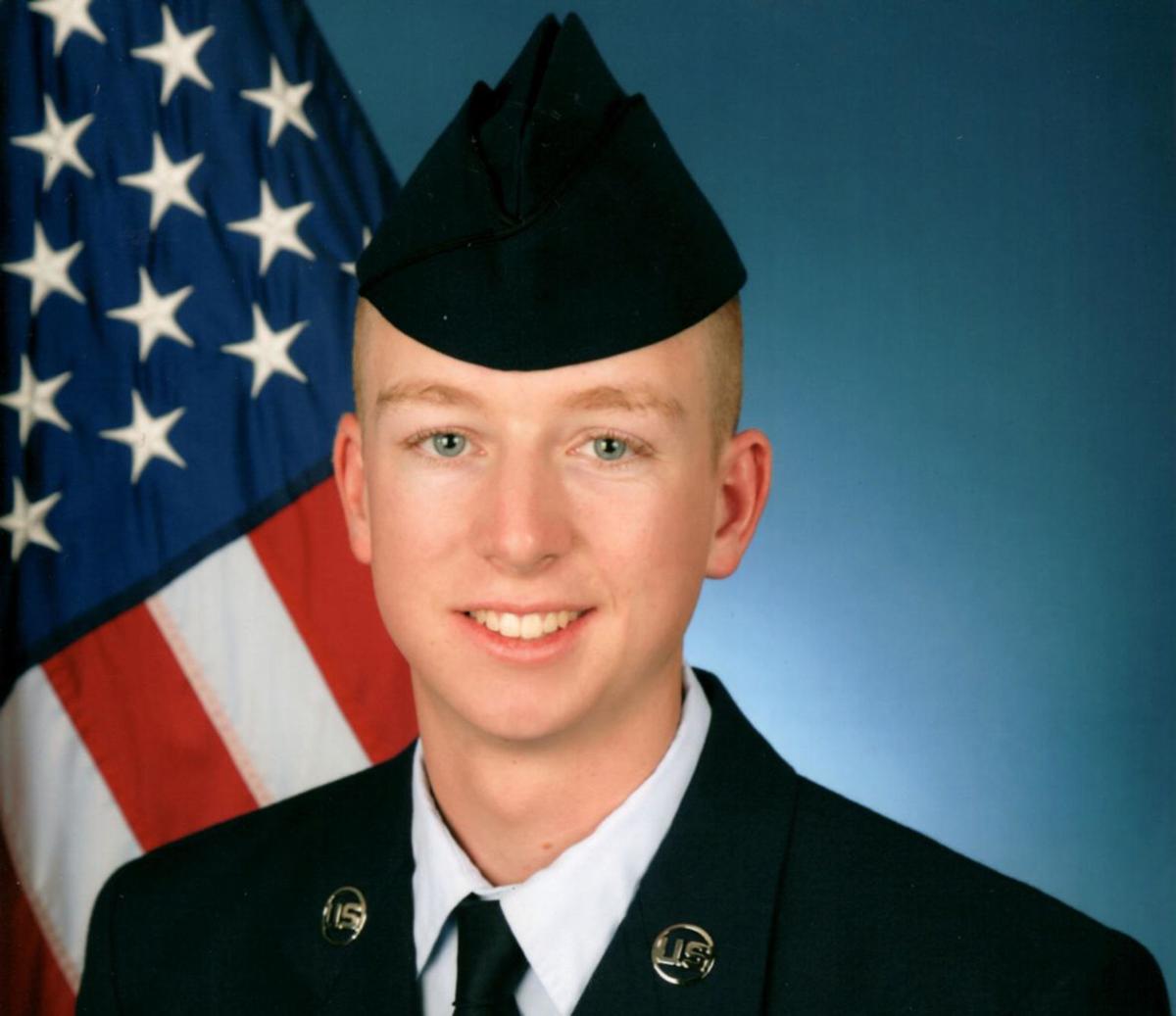