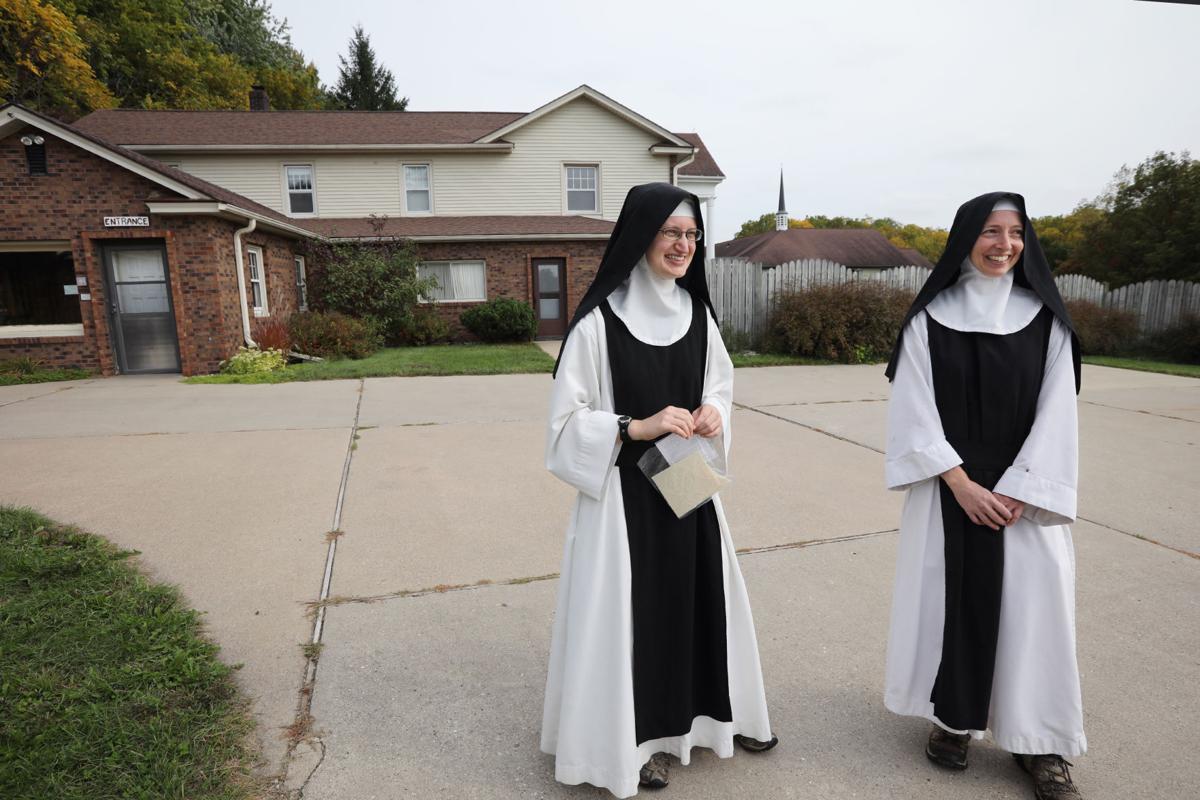 Sister Bede Berg, left, and Sister Christina Marie Murphy head back to the Valley of Our Lady Monastery complex as visitors show up on the grounds as part of the 11th annual Fermentation Fest in rural Sauk County. The monastery, home to 23 cloistered nuns, has been part of the landscape between Prairie du Sac and Baraboo since 1957. 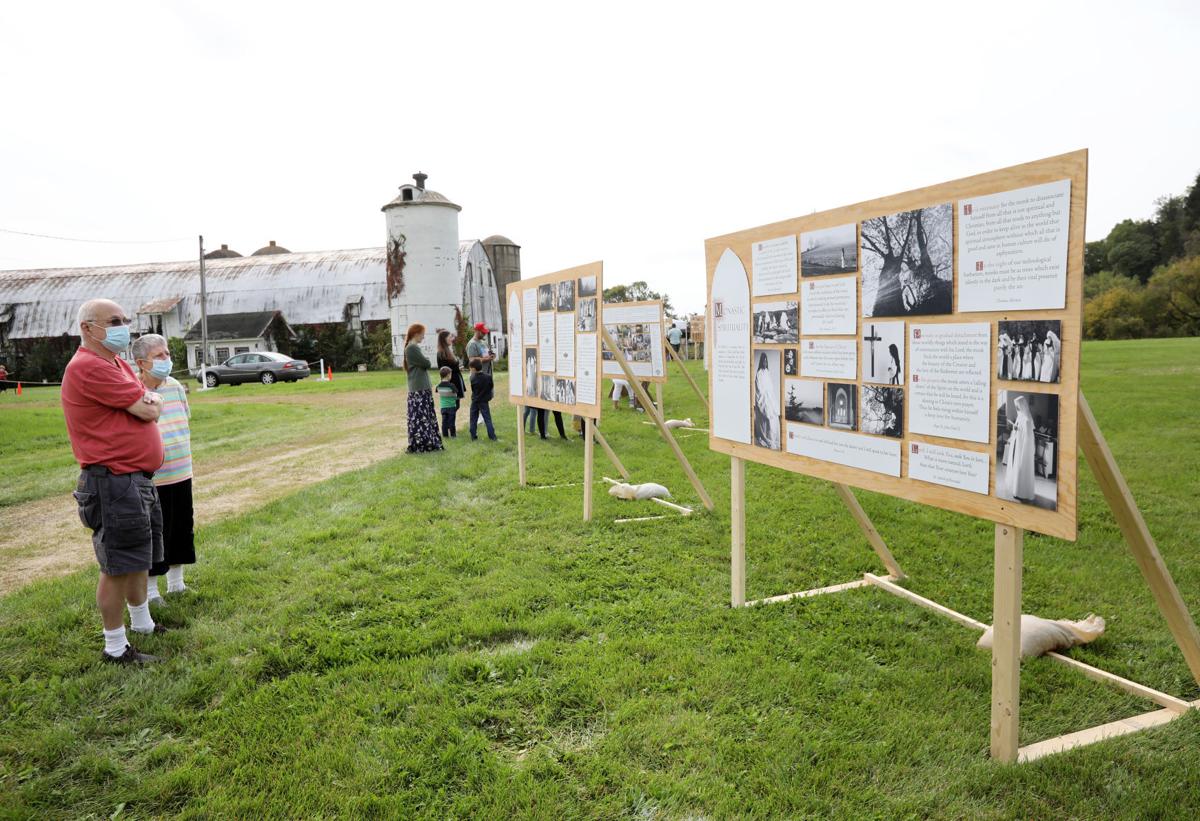 Visitors look at information on display on the grounds of Valley of Our Lady Monastery, located on 110 acres near Prairie du Sac. The nuns are amid an $18 million fundraising campaign to build a new monastery on 229 acres near Barneveld.

PRAIRIE DU SAC — Routine is built into the cloistered life of the 23 Cistercian nuns who live below a bluff at the base of the Baraboo Hills.

The Valley of Our Lady Monastery, along Otter Creek and west of Highway 12 opposite the former Badger Army Ammunition Plant, is where they rise daily at 3:30 a.m. for a schedule most cannot fathom.

Talking is limited. The nuns rarely venture out, and there is no endless scrolling of Twitter, commenting on Facebook, watching hours of cable news or reading the newspaper.

Instead, they learn of world events and chaos through prayer requests and work as bakers making Communion wafers for hundreds of Catholic parishes around the country. They remain consistent with their regimented time that includes prayers multiple times a day, vigils of the Psalms in Latin, Gregorian chants and a morning Mass performed by one of 20 rotating priests. Saturdays are reserved for cleaning the historic buildings nestled into a former farmstead established in the 1840s.

So it was a bit out of character on Saturday for some of the nuns to be outside readying an outdoor exhibit that will run through Oct. 4 as part of Fermentation Fest’s Farm/Art DTour, a free, self-guided, more-than-50-mile excursion through southern Sauk County. Now in its eighth year, the tour includes large-scale artworks, performances, local food stands, roadside poetry and educational signs that help tell the story of the land and its people.

“We seem to be the wild card on the DTour, for sure,” said Sister Christina Marie Murphy. “I think it’s a unique stop.”

This is the first time the nuns have taken part in the festival, organized by the Wormfarm Institute, a Reedsburg organization that since 2000 has been working to build a sustainable future for agriculture and the arts.

The monastery has had just two open houses since its inception in 1957, although all are welcome at daily Mass in its small chapel. The nuns agreed to take part in the Farm/Art DTour in an effort to sell some of their artwork and handmade rosaries, hand out samples of their unconsecrated bread and promote their $18 million fundraising campaign for a new facility they plan to build in the next few years in rural Iowa County.

“The whole fundraising campaign is pushing me. We’re dedicated to a quiet life of silent prayer so anything like this is just outside of what we normally do,” said Sister Bede Berg, 34, who is named after a saint from the seventh century and came to the valley in 2007. “The cloistered life is very cloistered and we want to keep it that way.”

On that point, when the exhibit opened to the public at 11 a.m. Saturday, Sister Bede and her other sisters who were helping to set up the displays next to an old dairy barn retreated to the monastery and let volunteers and friends of the monastery speak with visitors and encourage children to ring the bell in the temporary chapel set up for the exhibit located across from the monastery.

“They’re very focused. They know exactly what they want to do and they do it very, very well,” said Paul Merline, a member of St. Norbert Catholic Parish in nearby Roxbury and a volunteer at Saturday’s exhibit. “They don’t just pray for themselves. They pray for the world by the grace of God.”

The Cistercian Order was established in 1125 for pious women who wanted to imitate the austere life of the monks and was brought to the U.S. in 1957. That’s when nuns from the Swiss Abbey of Frauenthal founded what is now Valley of Our Lady Monastery on a farmstead that at one time was owned by former Wisconsin Gov. Emanuel Philipp, who was born in Sauk County, worked for a time as a railroad telegraph operator in Baraboo and served as governor from 1915 to 1921.

At one time the dairy barn was considered the largest in Sauk County. A former carriage house on the property is used by visiting priests, and the historic 1851 home of early settler Uncle Billy Johnson is also used by guests. The 110-acre property includes the former governor’s residence where the nuns live, a pump house and a chapel, in which the nuns, who range in age from 24 to 90, sit in the balcony during mass, separated from the guests below.

The nuns remain the only community of nuns of the ancient Cistercian Order in North America.

“No mere exhibit can explain away the mystery surrounding the call to contemplative prayer and its place in the world, however,” Sister Bede said. “Even more important than an introduction to our vocation and community, therefore, is our hope that those who visit us on the DTour will recognize that our monastery and vocation point to God’s continuing presence and action in the world. In times like these, when uncertainty and darkness seem to be prevalent, everyone is seeking encouragement and a sign of hope.”

But the monastery’s buildings are crumbling, development is encroaching, and the sounds from Highway 12, which is undergoing a major expansion, are increasing. The nuns had launched a $7 million project about 20 years ago but the effort, which had targeted property in Highland, gained little traction. The new campaign, started in 2017, has raised $9 million for the $12 million first phase, with another $6 million needed for a second phase. The plan is to build a new facility on 229 acres off Highway K near Barneveld. Construction could start in 2023, with the nuns taking occupancy in 2024.

“As the years have passed, the size of the project has grown, due to our increasing numbers as well as to inflation and other factors,” Sister Bede said.

The nuns, however, have not been immune from the realities of COVID-19.

One of their main jobs is baking altar bread twice a week for hundreds of parishes in 27 states. But with the pandemic limiting Masses, the demand for their round, thin wafers baked in sheets has dropped precipitously. For the past several months, the baking schedule has been reduced to just twice a month.

“It’s impacting us,” Sister Bede said. “The orders are not increasing, but we hope that changes.”

Graciousness, attention to detail a way of life for Bill Mattison

The Madison man, who was part of winning the 1992 America's Cup, built iceboats and sailboats and has a passion for the circus, has been inducted into the National Sailing Hall of Fame.

Tensions in Kenosha are high, but this diverse community of about 100,000 has been through tough times before and despite the problems, hope is pervasive.

Taking the census in remote areas means knocking on the doors of vacation homes and trying to find cell phone service.

Sister Bede Berg, left, and Sister Christina Marie Murphy head back to the Valley of Our Lady Monastery complex as visitors show up on the grounds as part of the 11th annual Fermentation Fest in rural Sauk County. The monastery, home to 23 cloistered nuns, has been part of the landscape between Prairie du Sac and Baraboo since 1957.

Visitors look at information on display on the grounds of Valley of Our Lady Monastery, located on 110 acres near Prairie du Sac. The nuns are amid an $18 million fundraising campaign to build a new monastery on 229 acres near Barneveld. 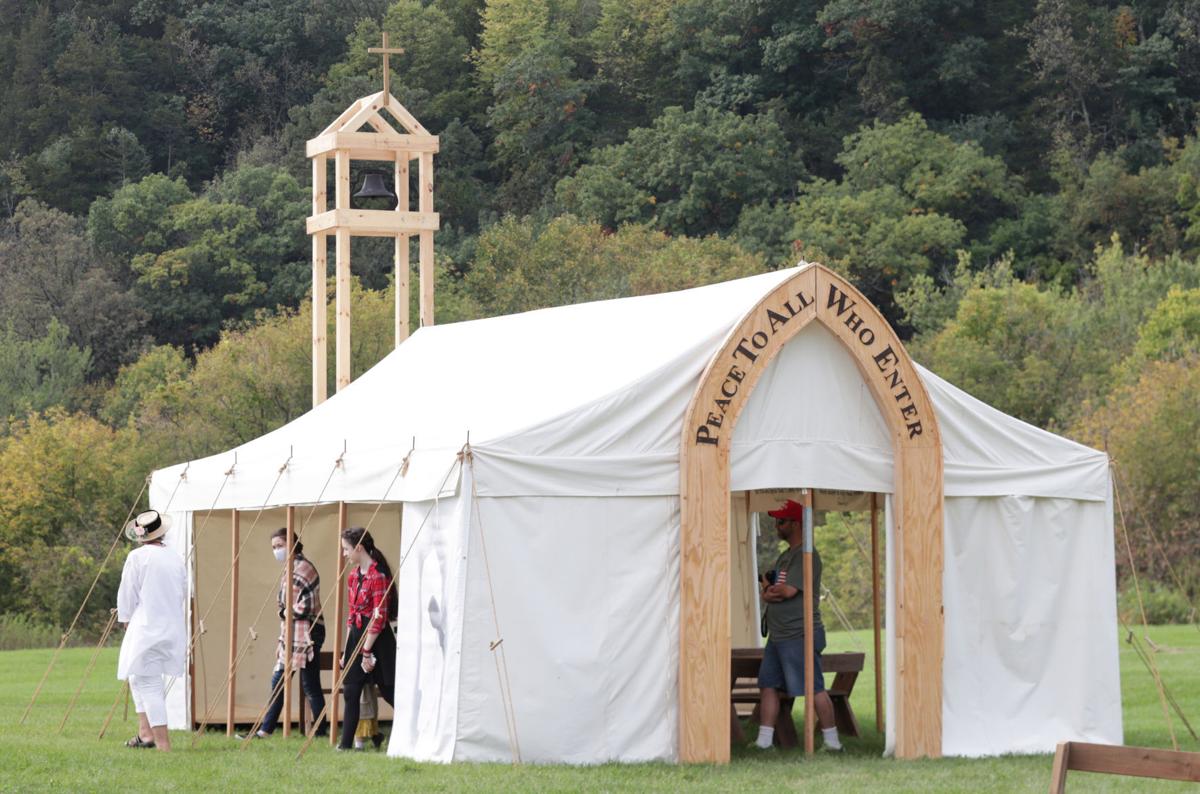 A temporary canvas chapel is set up for visitors on the grounds of Valley of Our Lady Monastery as part of the 11th annual Fermentation Fest in rural Sauk County. The chapel is open through Oct. 4 for prayer and contemplation, and includes a kiosk for prayer requests, which will be given to the 23 nuns in the monastery. 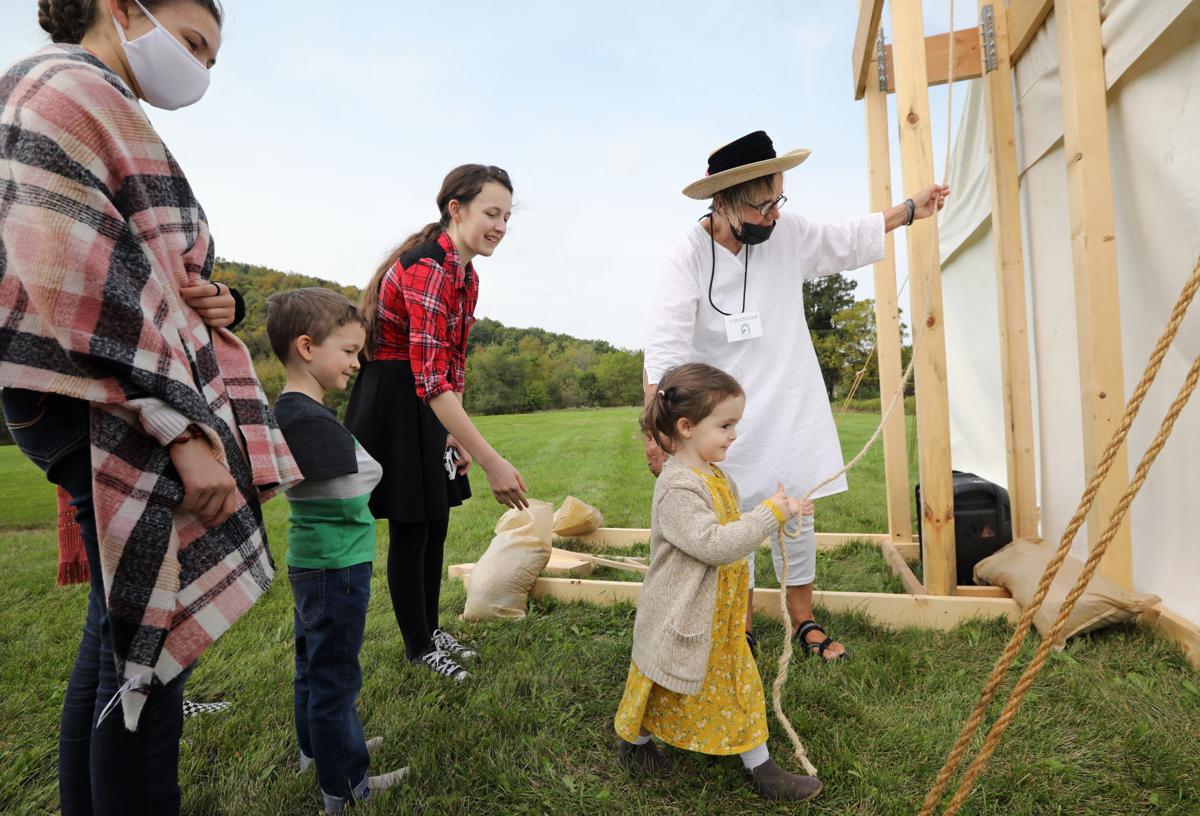 Volunteer Gail Lamberty, top right, a longtime friend of the nuns at Valley of Our Lady Monastery, helps Sophia Gootee, 3, of Reedsburg, ring the bell on a canvas chapel. Gootee's siblings are, from left, Victoria, 17, Alex, 6, and Julia, 14. 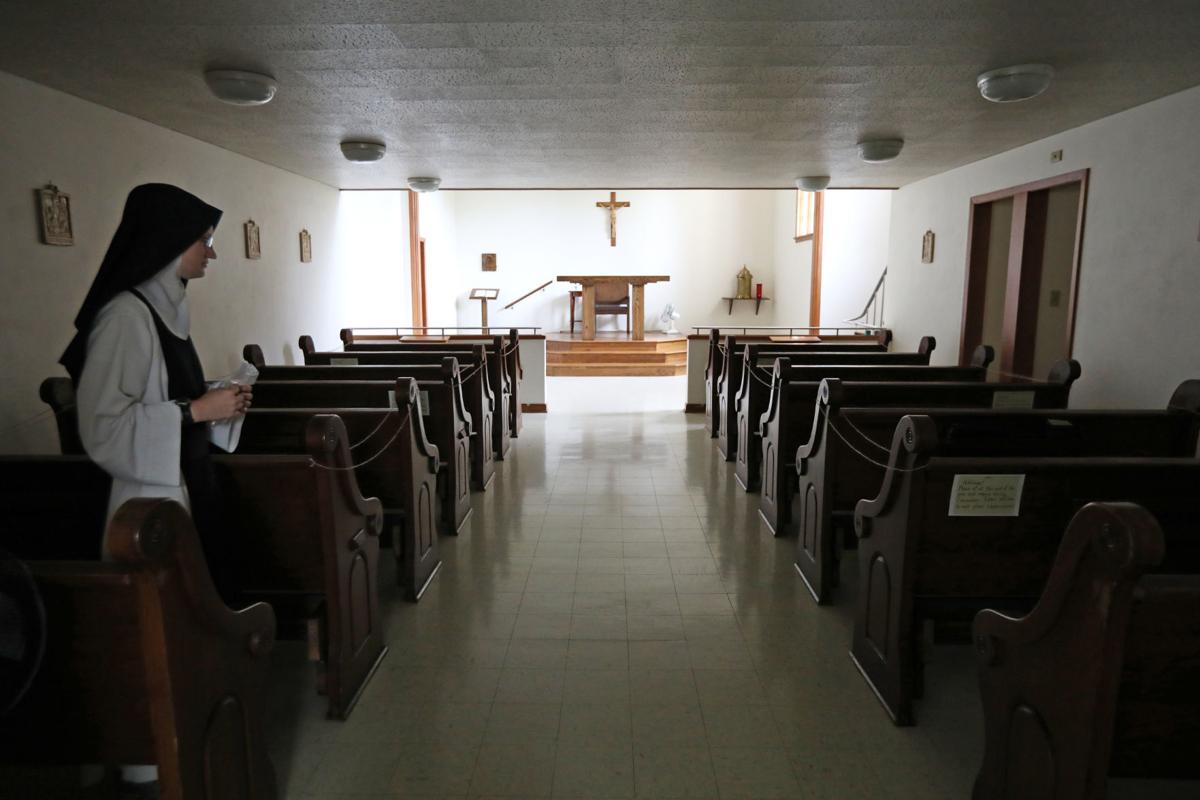 Sister Bede Berg gives a tour of the chapel at Valley of Our Lady Monastery. A morning Mass is celebrated daily and is open to the public. 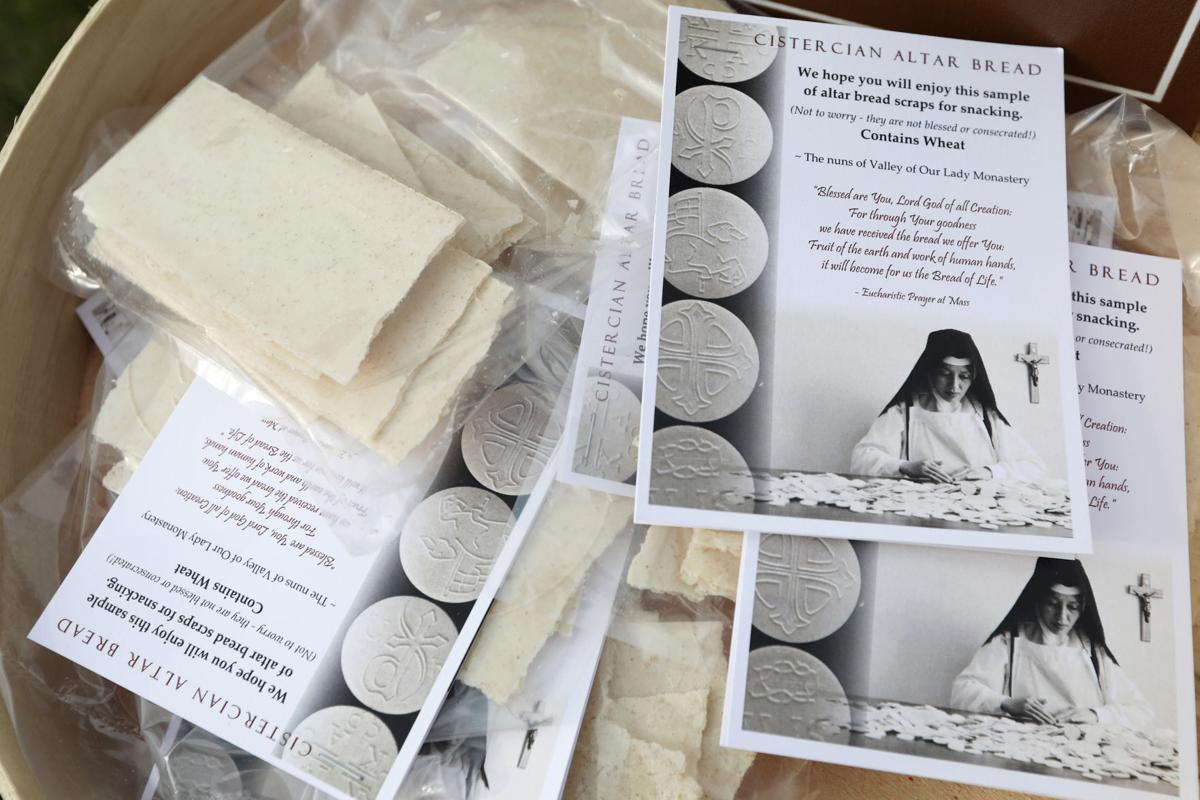 Altar bread made by Cistercian nuns from Valley of Our Lady Monastery is available for visitors to sample during the 11th annual Fermentation Fest's Farm/Art DTour. 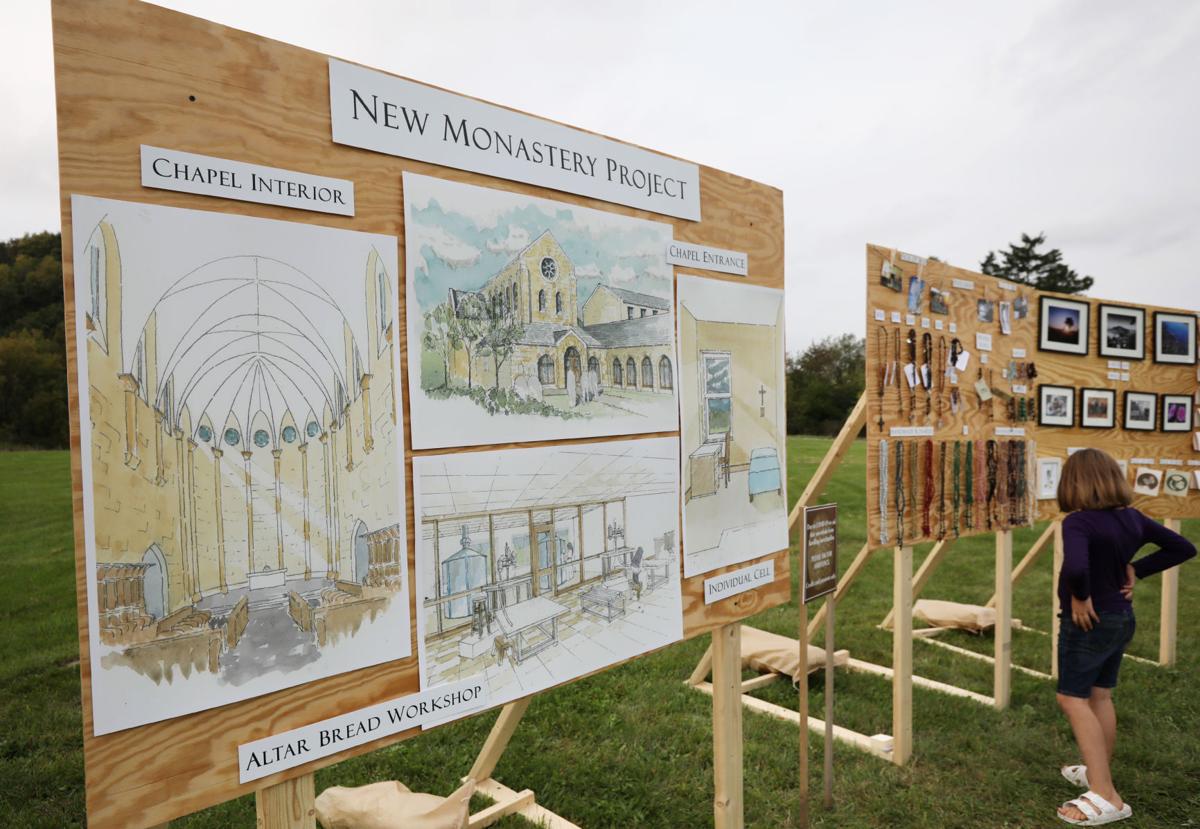 Renderings for a new monastery near Barneveld are part of the displays at an exhibit on the grounds of Valley of Our Lady Monastery during the Farm/Art DTour. 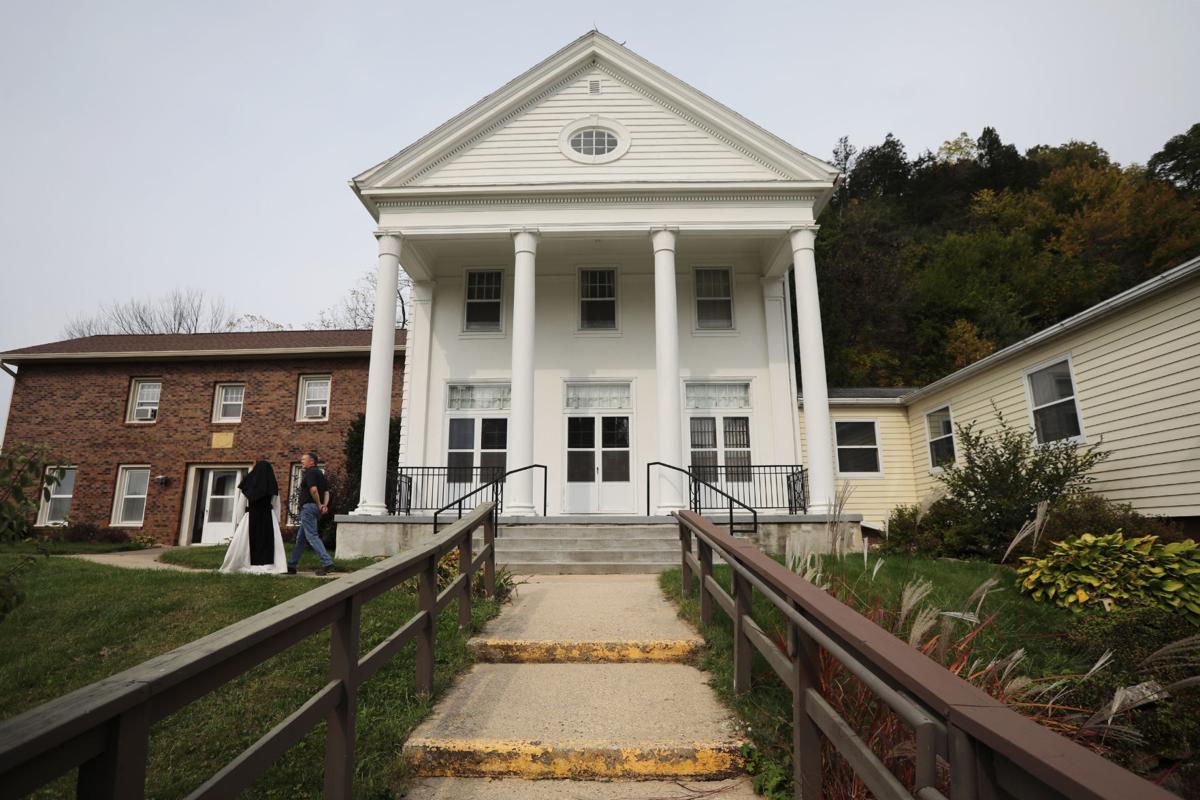 Part of the Valley of Our Lady Monastery is housed in the former residence of former Wisconsin Gov. Emanuel Philipp. The monastery has been on the property since 1957. 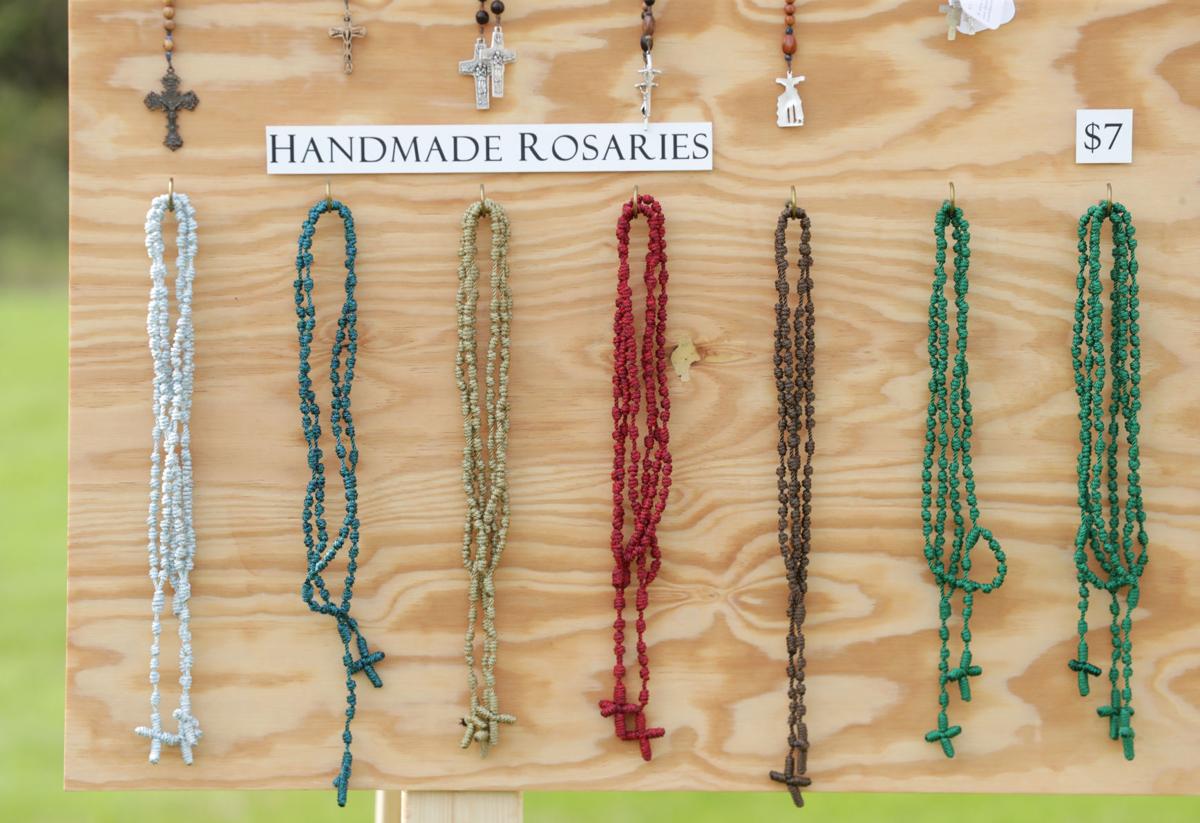 Rosaries are among the items made by nuns and for sale at an exhibit on the grounds of Valley of Our Lady Monastery. The nuns also do photography, pressed flowers and create cards.