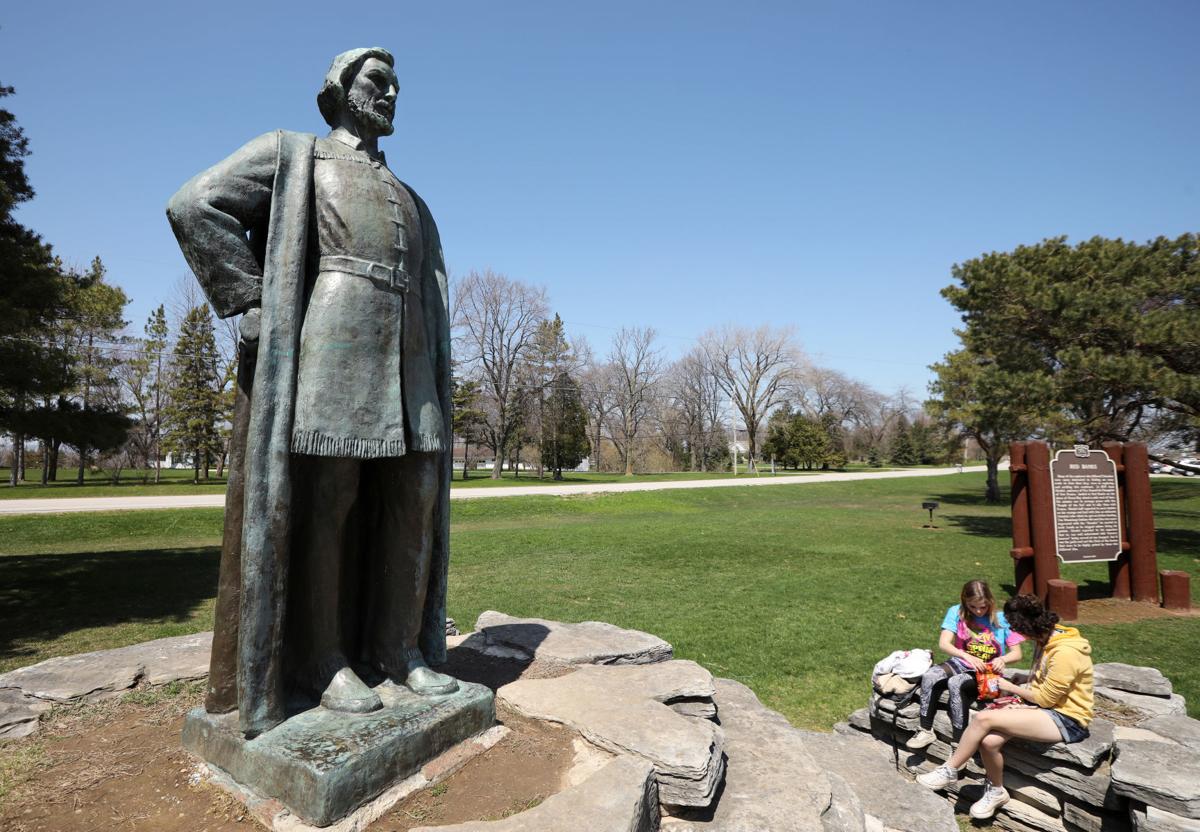 A statue of Jean Nicolet is one of the centerpieces at Wequiock Falls County Park in Green Bay. The statue was originally placed in 1951 a mile to the west at Red Banks, where it was long believed that Nicolet first stepped foot in what is now Wisconsin in 1634. The statue was moved to Wequiock Falls County Park in 2009, but a new book by a Milwaukee historian claims Nicolet likely first set foot in Wisconsin at present-day Marinette. 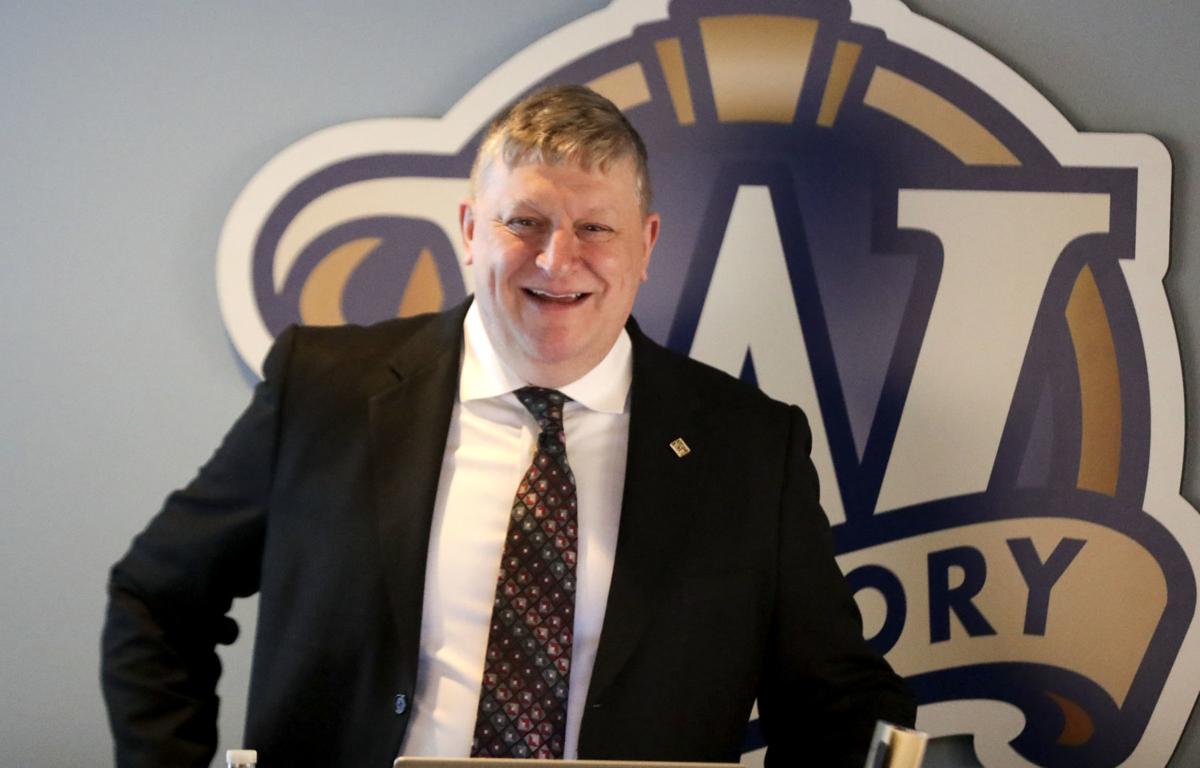 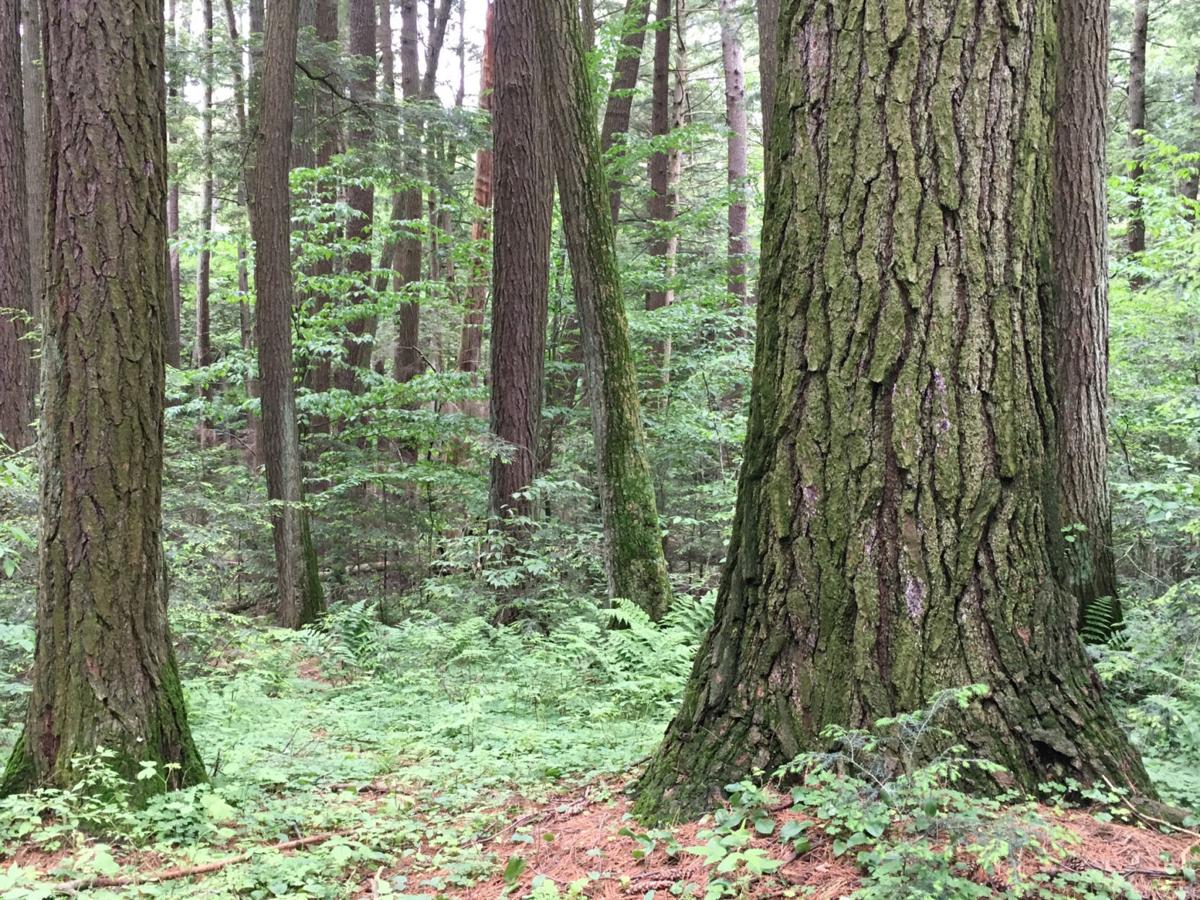 Old growth in the Cathedral Pines State Natural Area is located in the more than 1.5 million-acre Chequamegon-Nicolet National Forest in northern Wisconsin.

Patrick Jung was in fourth grade at 81st Street School in Milwaukee when he learned of the travels of Jean Nicolet, the famed French explorer.

According to Jung’s social studies book, Nicolet traversed the Great Lakes in 1634 seeking a passage to China but ended up just northeast of what is now the city of Green Bay. That is where Nicolet, dressed in a colorful Chinese robe, came ashore and met members of a local Native American tribe and fired his two pistols into the air to celebrate his arrival.

Only now, more than 45 years after his grade school history lessons, Jung has a very different take on Nicolet’s journey. And it’s one that is likely to bring change to textbooks, roadside markers, plaques beneath bronze statues and websites.

Jung, a historian and researcher at Milwaukee School of Engineering, has spent years studying Nicolet and believes Nicolet wore a cape, not a Chinese robe. Had Nicolet pointed his pistols into the air, gun powder would have fallen from the trays and the guns would not have fired. Jung says with a “good degree of probability” that Nicolet landed in a large Native American village in what is now Marinette, not at Red Banks on the bay of Green Bay’s southeastern shore.

And that trip to find a passage to China is also incorrect, Jung writes in his new book, “The Misunderstood Mission of Jean Nicolet,” published by Wisconsin Historical Society Press.

Jung contends Nicolet wasn’t an explorer but a diplomat sent by Samuel de Champlain to negotiate peace with the Puan Indian Tribe, ancestors of the Winnebago who are now known in Wisconsin as the Ho-Chunk. Jung’s book builds upon the research of the late scholar Nancy Oestrich Lurie, a longtime anthropologist at the Milwaukee Public Museum who specialized in the study of North American Indian history and culture. She also recruited Jung to help her write part of a 2009 book on Nicolet.

“She was right about a lot of things, but if she were alive today, I think she would agree with me,” Jung told a gathering last month at the Wisconsin Historical Society Museum. “The human past often gives up its secrets very grudgingly. There’s a lot of things that we know very, very well and there are some things we don’t know very well. Part of the problem is how well something is documented. In the case of Nicolet, there’s a total of four printed pages that describe his mission into Wisconsin.”

And it’s those four pages that through the years have led to assumptions, speculation and the continuation of historical errors.

Nicolet’s name is all over Wisconsin. It has been used to name paper mills, banks, a northern Wisconsin forest, roads, schools and even bottled water.

Jung, who in 2007 published a book on the Black Hawk War of 1832, is not debating the importance of Nicolet in Wisconsin’s history. He’s just trying to ensure that an accurate story is told after more than a century of images that are inaccurate.

Paintings of Nicolet’s historic moment were based on the research of historians between the 1850s and 1880s. Those works of art include Hugo Ballin’s 1912 painting that hangs in the Governor’s Conference Room in the state Capitol. A mural painted by Franz Rohrback was installed in 1910 in the rotunda of the Brown County Courthouse in Green Bay.

But the most recognized image is from Edwin Willard Deming, who spent a lifetime using a brush to document Native American history around the country. In 1907, Deming painted his own colorful version of Nicolet’s historic moment that appeared in Jung’s grade school textbook and in textbooks read by perhaps millions of other students through the years. In 1935, the U.S. Post Office issued a 3-cent stamp that included Deming’s painting.

“Part of the problem is the indelible images that have been burned into our minds since we were children,” Jung said. “I’ve seen this as a kid and Nancy (Lurie) has seen this as a kid. Historical errors often have a way of perpetuating themselves.”

It was Lurie, who died in 2017, who uncovered one of the inaccuracies in the Nicolet story. The early writings of Nicolet’s trip by Jesuit missionaries were brief and lacked detail, which allowed, through the years, scholars to insert “any number of factual conclusions, poorly supported conclusions and even outright fabrications into their analysis,” Jung wrote in his book’s introduction.

A perfect example involves Nicolet’s clothing when he arrived in Wisconsin. Lurie said Nicolet was actually wearing a cape of China de masque, a silk popular and prevalent at the time. It had nothing to do with China but was mentioned in the four pages written by the Jesuits and was misinterpreted by early scholars.

Jung supports his theory on Nicolet’s landing spot in Marinette because of the large Menominee village that was there and evidence that shows Nicolet had met with the Menominee, while the Puan, a tribe of an estimated 20,000 people, lived further to the south and west. Jung said the claim that Nicolet was an explorer also doesn’t match what was happening politically in the region, as de Champlain would have been more worried about security than finding a route to China, something he himself had tried to find years earlier without success.

But while changing textbooks, murals and other historical interpretations are difficult, and in many cases unlikely, the Wisconsin Historical Society is in the process of reviewing historical signage for all of its markers throughout the state. The brown, wooden sign about Nicolet along Highway 57 at Wequiock Falls County Park would be prime contender for a major edit.

A bronze statue of Nicolet, paid for by contributions from school children, was erected in 1951 along with a wooden marker at Red Banks overlooking the bay of Green Bay. The wooden marker was replaced with an aluminum sign in 1957, but both the sign and the statue of Nicolet were moved in 2009 to Wequiock Falls, a mile to the east, after the reconstruction of Highway 57. That’s when the brown wooden historical marker was added.

“It is possible to replace the existing marker with a new version that reflects current knowledge of Nicolet,” said Kristin Gilpatrick, sales and marketing manager for the Wisconsin Historical Society Press. “The Patrick Jung book documents a great deal of outdated information about Jean Nicolet.”

But Brown County isn’t the only community that claims to be the home of Nicolet’s landing. Another historical marker is located in the city of Neenah where some believe Nicolet first came ashore on Doty Island after paddling up the north-flowing Fox River from Green Bay. Jung, however, would like to see more research and recognition of the tribes that were already living in the region when Nicolet arrived.

“The fact that we have two historical markers that say exactly the same thing, separated by a span of about 50 miles – that’s a problem,” Jung said. “We worry too much about historical markers and bronze statues. We have to go for the deeper, deeper questions. Who was already there? That’s a much more important question.”

The company was founded in 1938 in Milwaukee but the new Madison location is designed to capture the vast amount of foot traffic in the 100 block of State Street.

The Adams County resort now has one of the largest collections of grass tennis courts in the country.

A statue of Jean Nicolet is one of the centerpieces at Wequiock Falls County Park in Green Bay. The statue was originally placed in 1951 a mile to the west at Red Banks, where it was long believed that Nicolet first stepped foot in what is now Wisconsin in 1634. The statue was moved to Wequiock Falls County Park in 2009, but a new book by a Milwaukee historian claims Nicolet likely first set foot in Wisconsin at present-day Marinette. 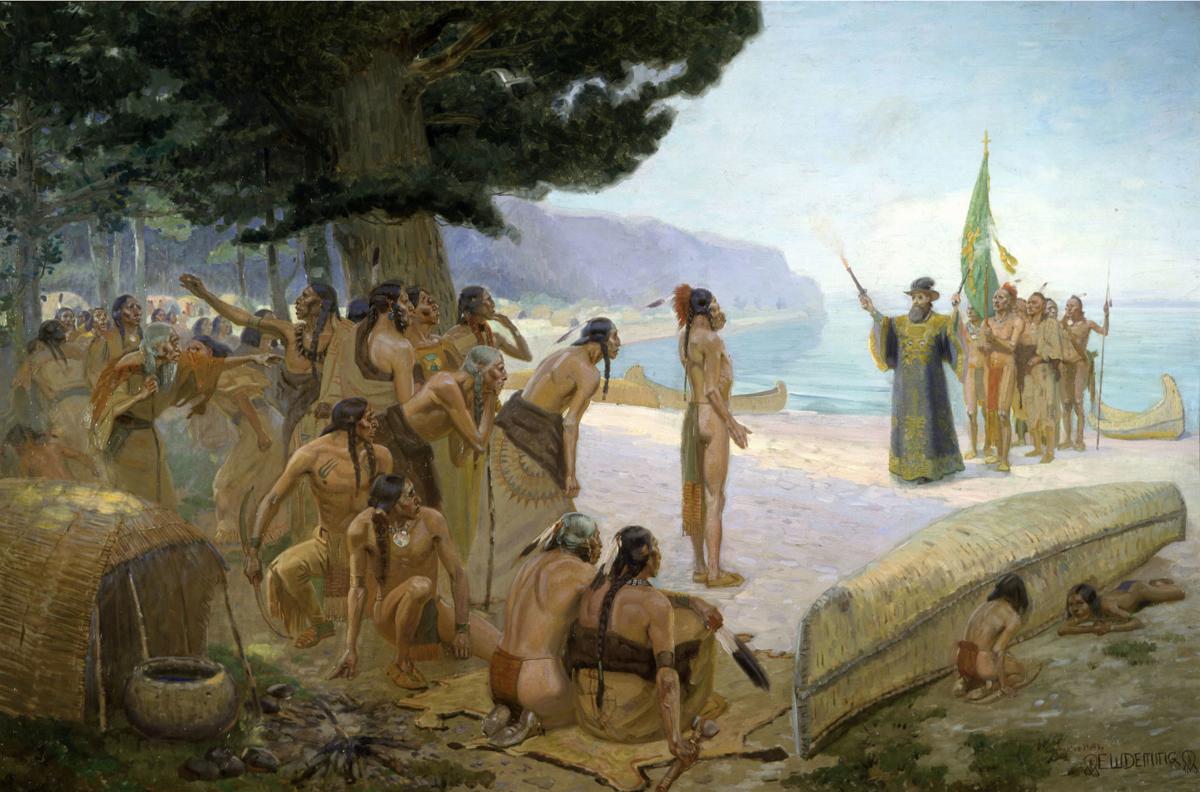 E.W. Deming's 1907 painting of Jean Nicolet landing in Green Bay shows Nicolet wearing a Chinese robe and firing his weapons into the air. Patrick Jung, a history professor at Milwaukee School of Engineering, writes in his new book, "The Misunderstood Mission of Jean Nicolet," that many of the assumptions about Nicolet's journey to Wisconsin are incorrect. 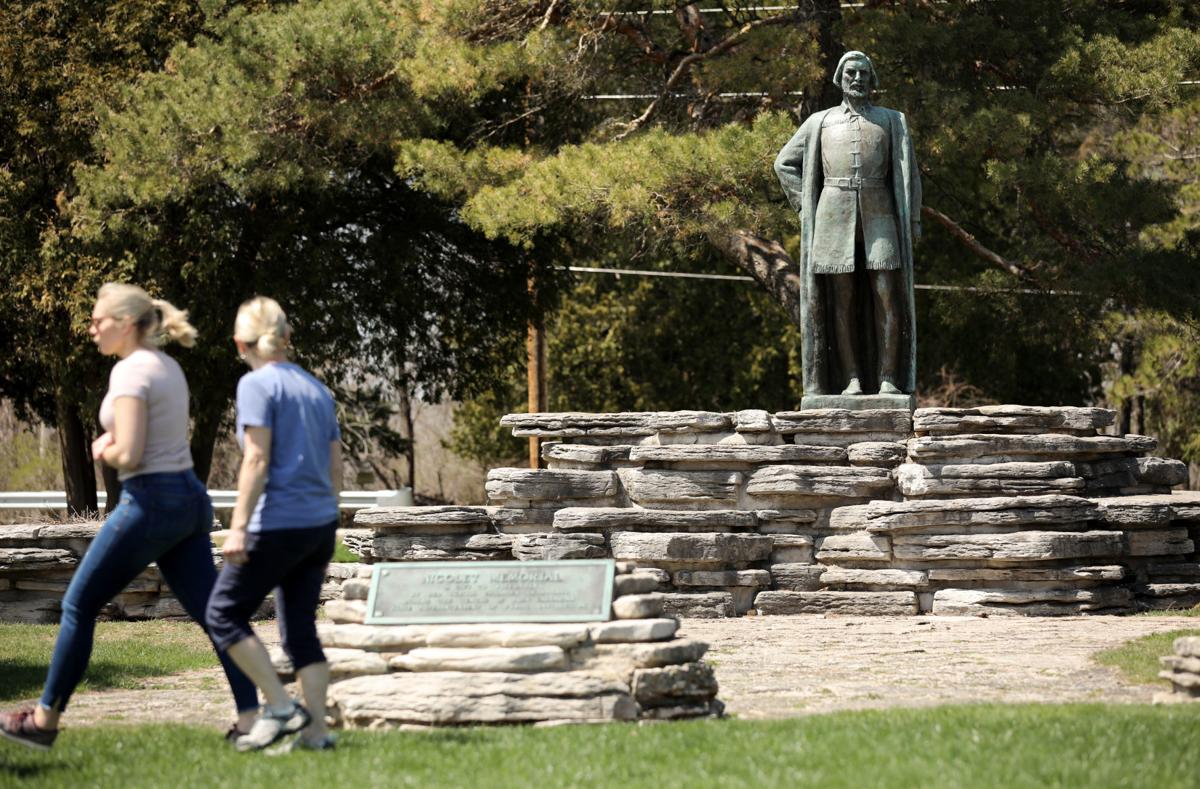 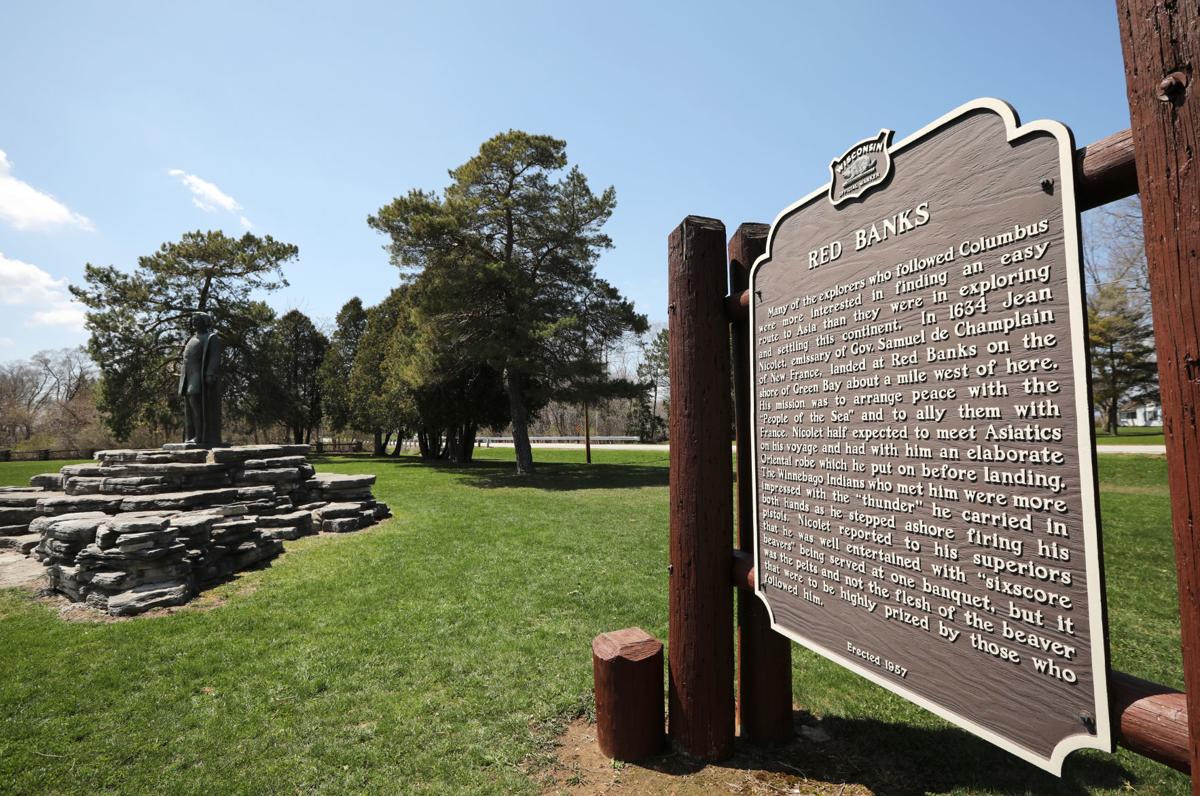 This wooden historical marker about Jean Nicolet at Wequiock Falls County Park near Green Bay could be in line for a major revision. 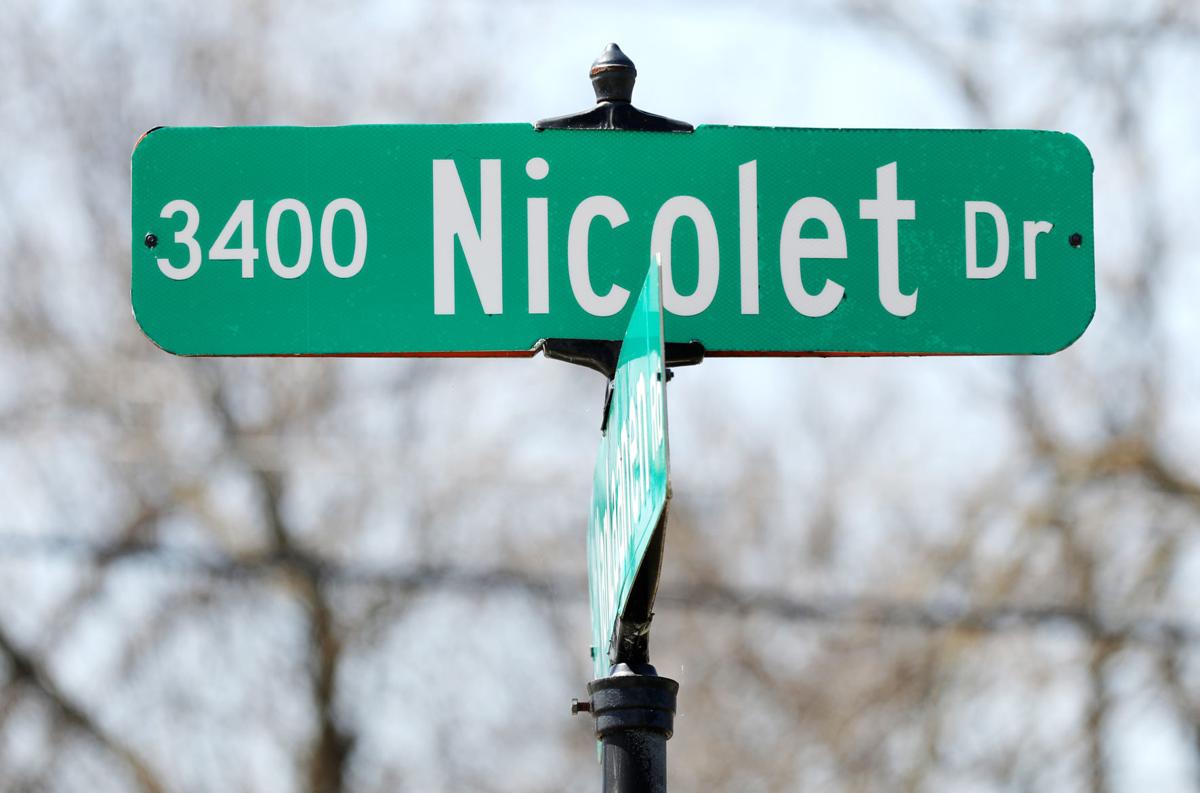 Nicolet Drive runs along the southeastern shore of the bay of Green Bay in Brown County and is named after Jean Nicolet, who is believed to have come to the area in 1634. That theory, however, is now being disputed. 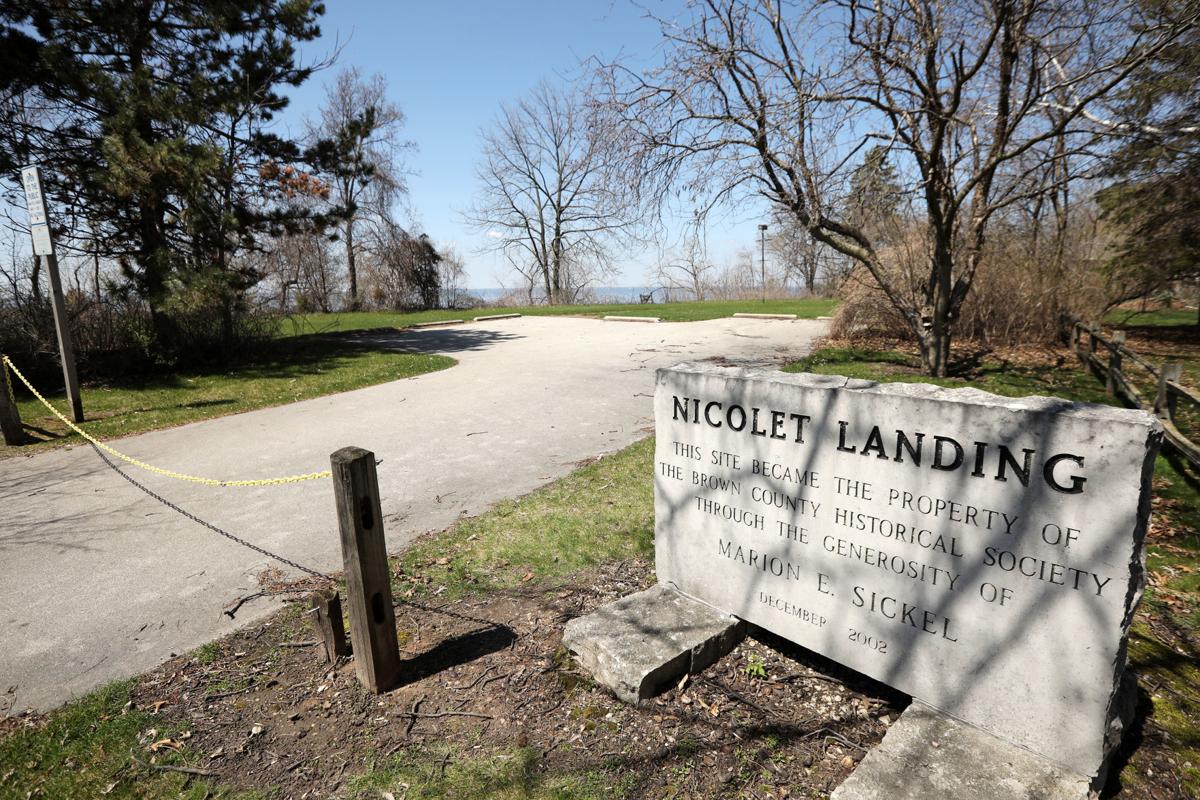 Nicolet Landing on Benderville Road near Green Bay is at Red Banks on the southeastern shore of the bay of Green Bay. This is where early scholars thought Jean Nicolet first stepped foot in what would become Wisconsin. But he may have first visited what is now Marinette, according to researcher and historian Patrick Jung. 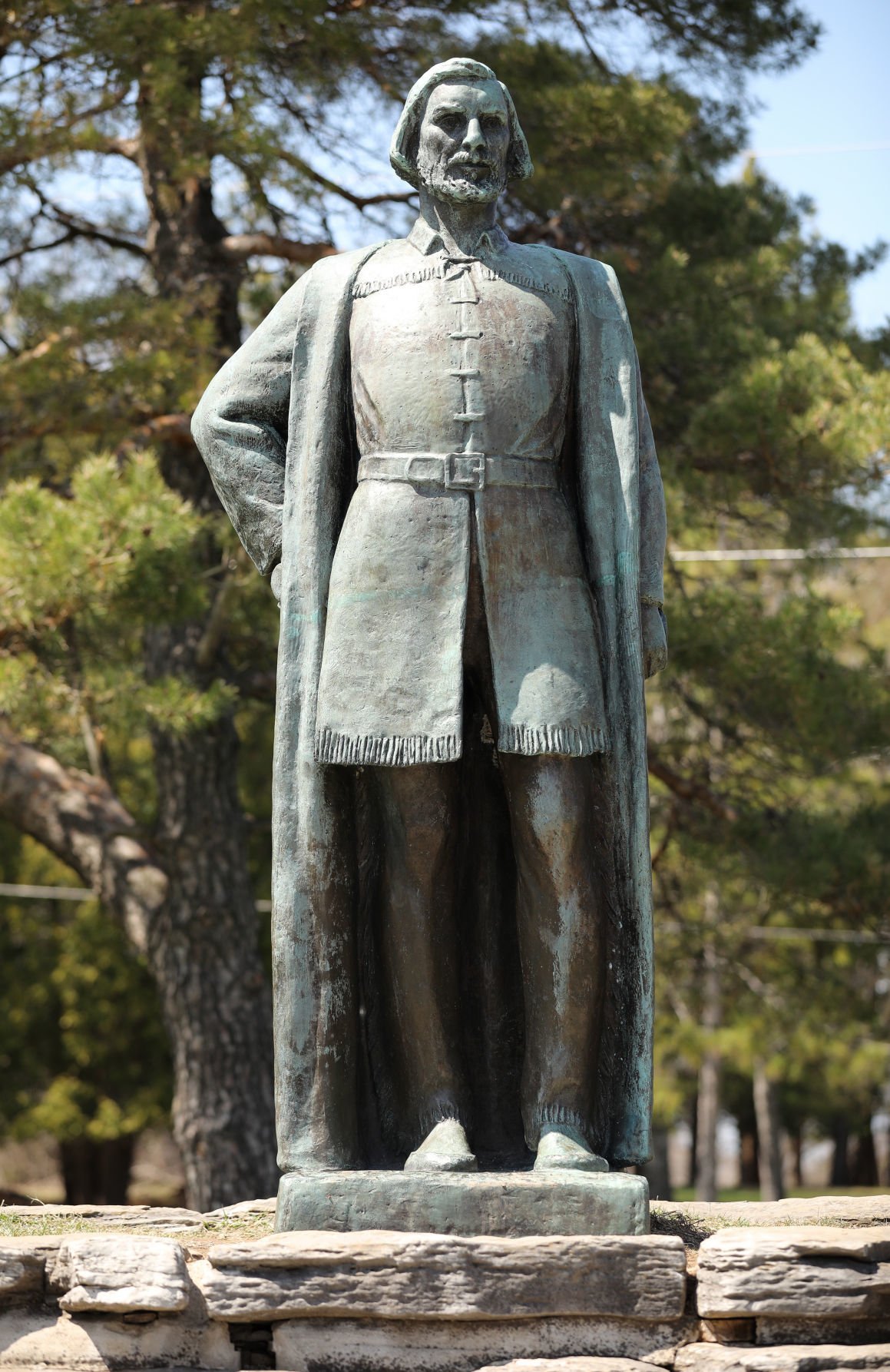 This Jean Nicolet statue was erected at Red Banks in 1951 but in 2009 was moved a mile to the east to Wequiock Falls County Park along Highway 57 in Brown County. 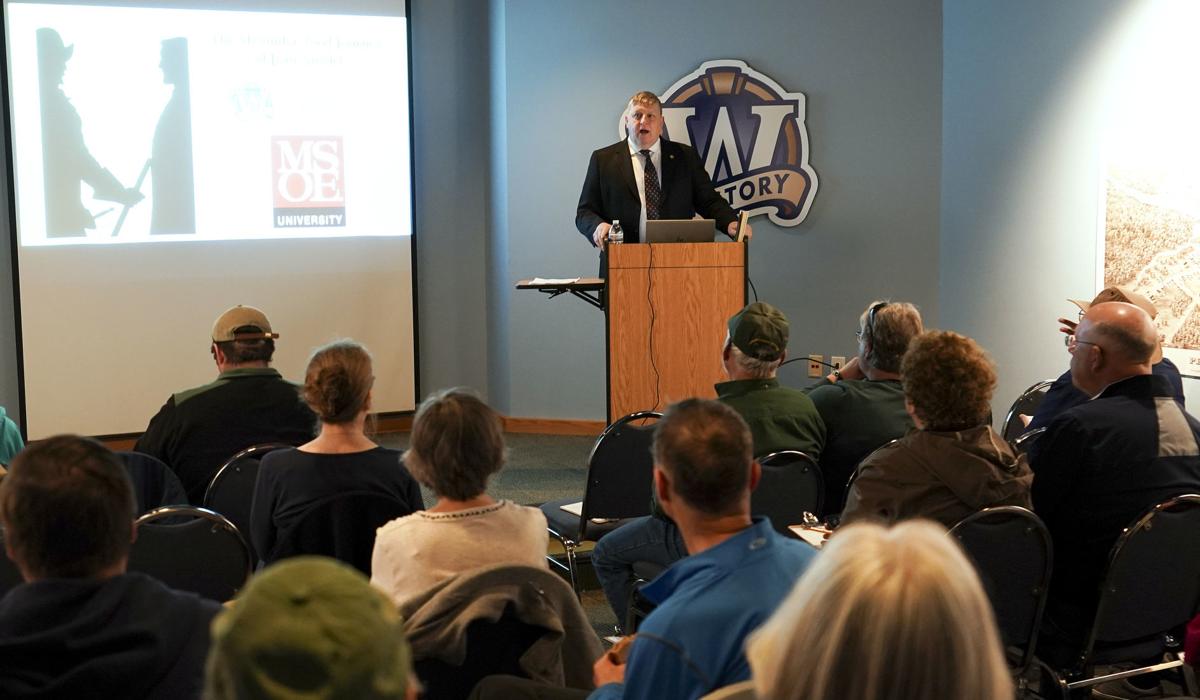 Patrick Jung spoke to a lunch hour crowd in early May at the Wisconsin Historical Society Museum in Madison.

Old growth in the Cathedral Pines State Natural Area is located in the more than 1.5 million-acre Chequamegon-Nicolet National Forest in northern Wisconsin.