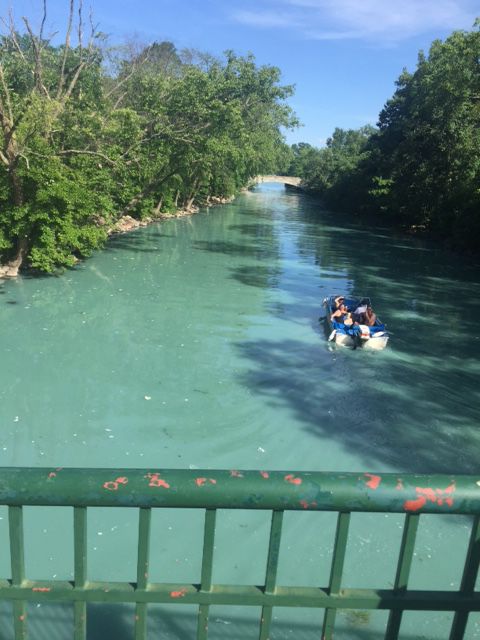 A major June 16 outbreak of cyanobacteria — called blue-green algae — started in Lake Mendota and flowed down the Yahara River in Madison. 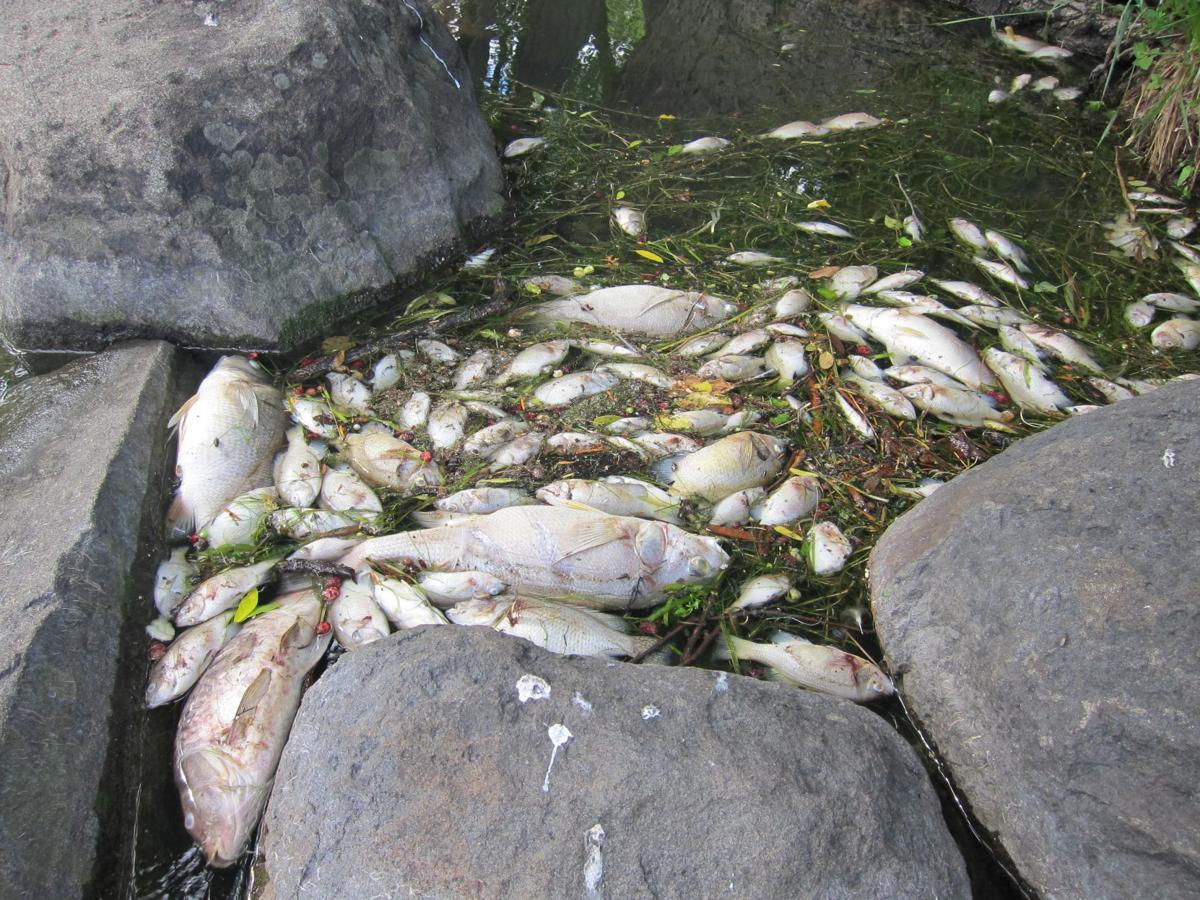 The Yahara River in Madison was dotted with many pockets of dead fish like this after a major bloom of cyanobacteria formed on June 16 upstream in Lake Mendota. The bacteria can sicken or kill animals and humans. Fish likely died when decomposition of the vast bloom left water without oxygen. This photo was taken June 18 by a UW-Madison scientist. 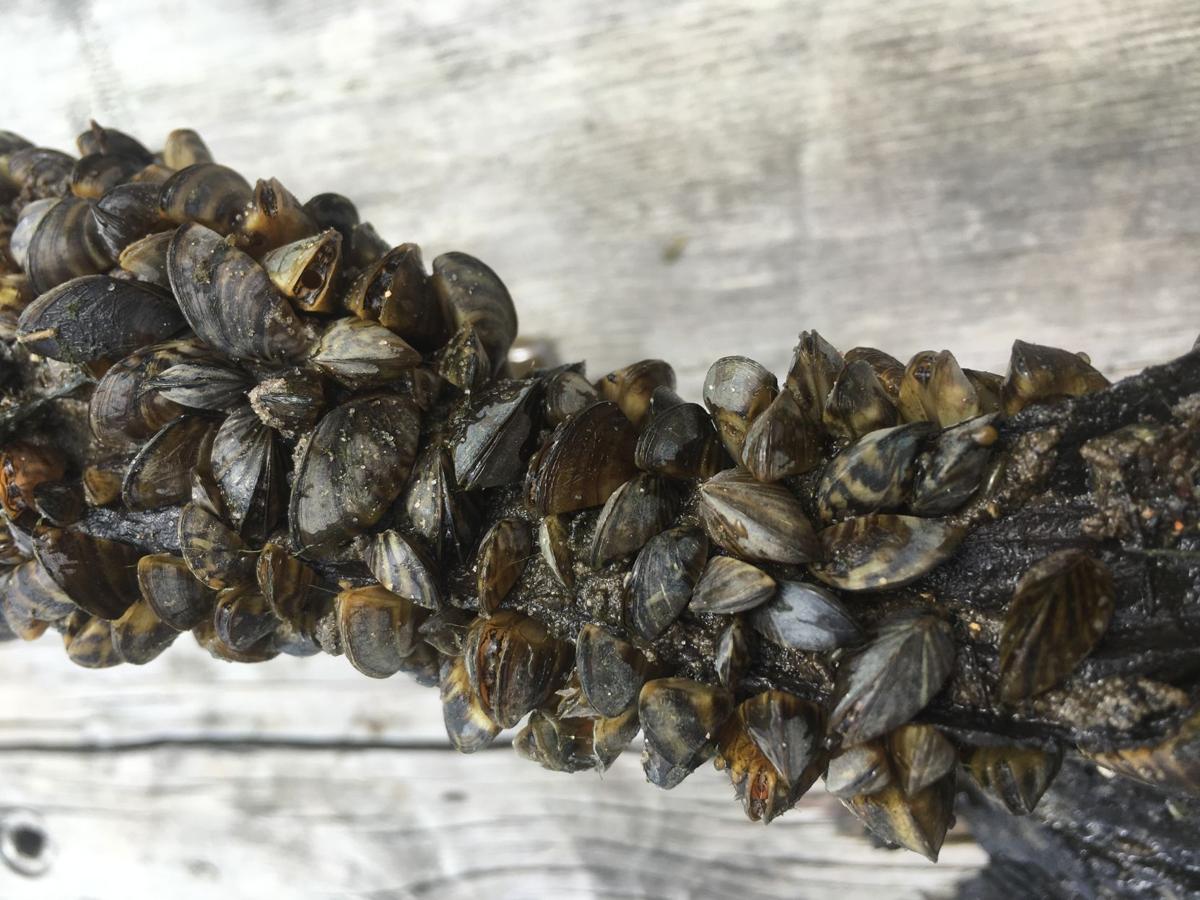 The population of invasive zebra mussels has grown rapidly in Lake Mendota, threatening to fundamentally change the lake's ecosystem and worsen the impact of pollution from farms, UW-Madison experts say. 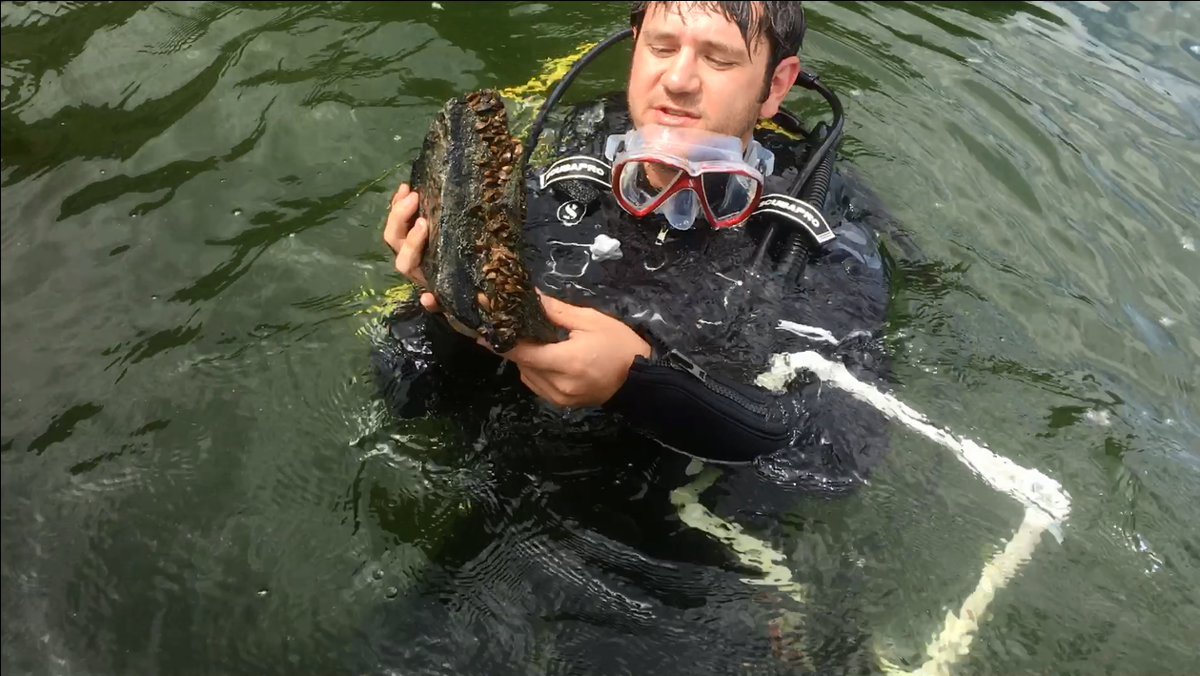 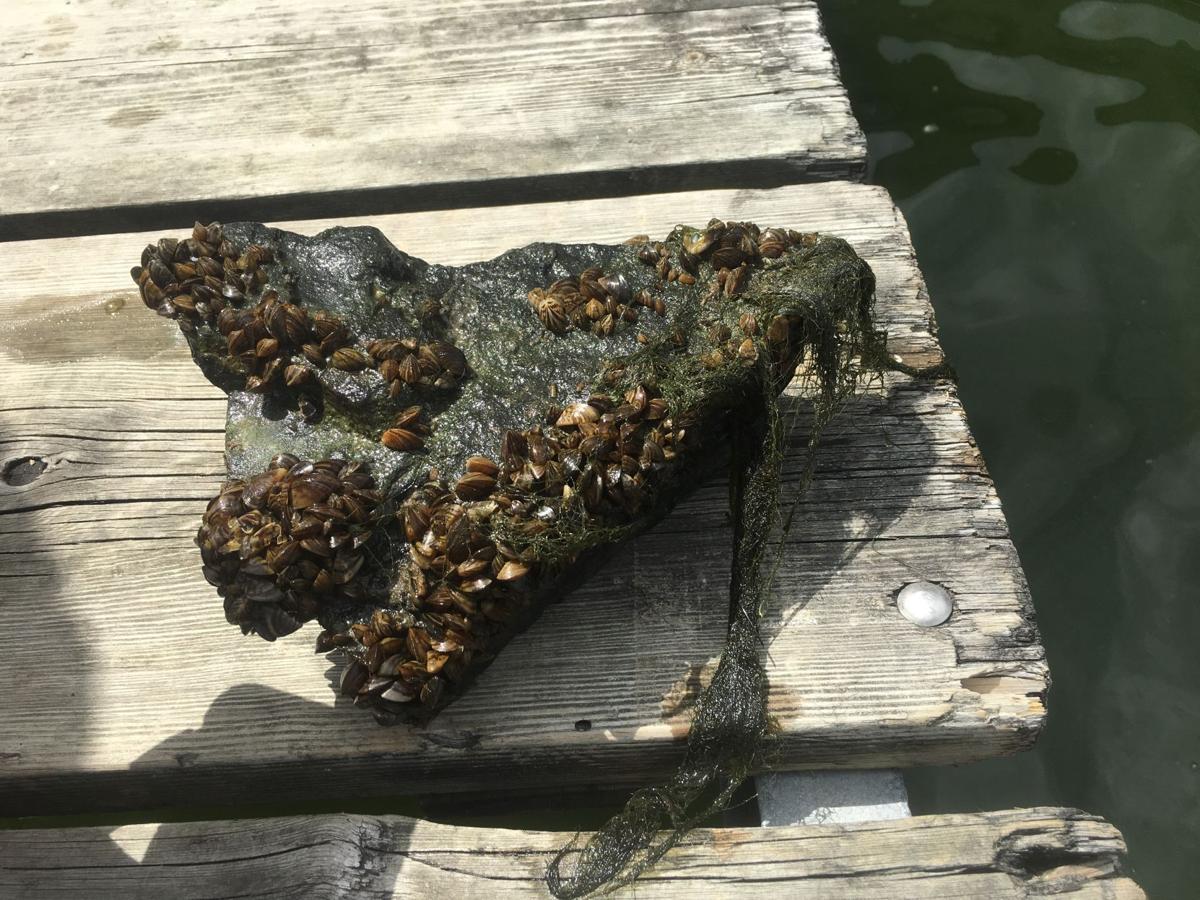 UW-Madison researchers say the invasive zebra mussel is spreading quickly in Lake Mendota. Above, dozens of the then -- and the stringy vegetation that grows near them -- are attached to a rock retrieved from near shore.

An explosion of the zebra mussel population in Lake Mendota this year could mean more foul-smelling shoreline slime and repeats of the major fish kill and vast bloom of toxic bacteria that hit Madison’s lakes already this summer, experts say.

Farm pollution is the main driver of this month’s surprisingly severe water quality woes, but the invasive mollusks now covering much of Lake Mendota’s bottom aren’t going to help matters.

“We’ve been shocked to see how many there are,” said Jake Vander Zanden, UW-Madison’s top expert on zebra mussels. “It’s a transformation of the ecosystem.”

For the first time since the little mollusks were found in Lake Mendota in 2015, it is clear they are thriving, said Vander Zanden, an aquatic biologist at the UW Center for Limnology.

The transplant from Europe took hold in many other U.S. lakes in the 1990s. Because zebra mussels were so late to become established here, researchers hoped there was something about Madison waters inhospitable to them, Vander Zanden said.

Zebra mussels change a lake by filtering food from water, which makes water clearer so that additional sunlight reaches the bottom. The sunlight, along with nutrients mussels excrete on the bottom, spur plant growth and the potential for more dead vegetation washing up and decomposing in smelly piles on shores, Vander Zanden said.

This year divers are finding a typical zebra mussel by-product — bottom-clinging mats of algae that look like green cotton candy — all over Lake Mendota, he said.

The zebra mussel’s appetite also threatens to worsen the hazardous bacterial blooms that cause beach closings, and which killed large numbers of fish last week.

Zebra mussels don’t eat much of the toxic cyanobacteria — commonly called “blue-green algae” — that can sicken or kill animals and humans. But the mussels do consume just about everything else, eliminating organisms that otherwise compete with the bacteria for food. That could mean larger and more frequent bacterial outbreaks, Vander Zanden said.

Like the unnatural growths of weeds and algae that limit recreational use in hundreds of Wisconsin lakes, the bright green cyanobacteria blooms are products of steadily warming weather and largely unchecked runoff of farm pollutants into state waters, he said.

There isn’t a practical way of eliminating zebra mussels, so their growth adds urgency to the issues of the warming climate of pollution from farms.

“The thing aside from climate change that’s most in our power to control is the nutrient input,” Vander Zanden said. “But whatever we’re doing, it’s not working.”

Under state law, farmers are offered financial incentives to limit runoff, and especially large farms must submit plans for spreading manure on fields. Opponents of stricter regulations say there are technical difficulties in regulating runoff, but conservationists say those could be overcome if politicians were willing get tougher with the powerful agriculture industry.

Vander Zanden said he hopes the recent large-scale bacterial bloom was a wake-up call for Madison residents who witnessed it and its aftermath.

June 16 — cause for concern

Vander Zanden and limnology center director Stephen Carpenter said the bloom that formed on Lake Mendota on June 16 was the worst such outbreak in decades.

Carpenter said he was shocked to see the bright green hue stretching as far as he could see from his second floor office on Lake Mendota’s south shore.

The stage was set for the outbreak by above-average rainfall this year washing nutrients into the lake, Carpenter said.

The bloom appeared as the water warmed and there was little wind or wave action to disperse the bacteria and mix them into deeper water, Carpenter said.

Under those conditions they can rise and become highly concentrated near the surface, where too much sun begins to kill them, creating broad scummy expanses. Decomposition of the organisms robs the water of oxygen and kills fish, Carpenter said.

The bright-colored water flowed out of Lake Mendota and carried dead and dying fish down the Yahara River and into Lake Monona. Carpenter said the river became a “dead zone.”

Limnology center scientists on the scene said they saw bluegills — which typically don’t break the surface of the water — rising up to gasp for breath, while invertebrates like crayfish emerged from the river and died.

Based on what he saw from a bridge over the Yahara on June 18, Vander Zanden estimated that thousands of walleye, pike, bluegill and other fish were killed.

“I would have a hard time putting a number on it, but it was not dozens of fish,” he said. “It had to have been in the thousands.”

A steady stream of dead fish were floated down the river and there were many spots where between 20 and 50 of them were hung up among rocks near the water’s edge, he said.

Carpenter said that by June 19 the wind had mixed most of the dead and dying cyanobacteria back into the lake water.

“Next time we have a week to 10 days of hot weather we may see another bloom,” he said. “It is pretty early in the summer, and I would be surprised if this was the last bloom of 2017.”

People who came in contact with the water could have developed skin rashes or symptoms of food poisoning, Carpenter said.

The 16 beaches monitored by Public Health Madison and Dane County were closed between 70 and 120 times per summer between 2012 and 2016. There have been 34 closures this year.

UW-Madison researchers dive into the lake and find signs of the invasive species' spread. They say it is fundamentally altering the lake ecosystem.

More than four years after the EPA listed 75 deficiencies, the DNR is issuing pollution permits that fall short of minimum standards.

An agreement signed by more than 60 local governments will pool more than $2 million annually for 20 years starting Jan. 1.

County walls off water near new beach to keep it clean

Filters and UV rays will clean water near the beach, with an underwater curtain installed to block algae and bacteria.

Enforcement against industrial, municipal and farm polluters declined for 10 years as DNR issued violations in only 6 percent of cases.

There are several causes for unfilled positions.

The state sought options for businesses facing the cost of reducing phosphorous that clogs lakes and streams with weeds and algae.

Cleaner boats and trailers, new bathrooms and another upgrade for Marshall Park

A $4.3 million project also includes a bike repair area and a new sewage lift station at the Far West Side park.

OUR VIEW: Madison and Dane County have made significant progress in protecting area lakes, but much more work must be done

Four caught near Prairie du Sac no cause for alarm but DNR stresses importance of following rules to prevent spread of invasive species.

Gypsy moth spray efforts ending for most of Wisconsin

Demand has dropped for aerial spraying in the eastern two-thirds of the state; spraying to slow the pest's spread westward is continuing.

The bloody-red shrimp was discovered in the lake near Superior, making it the last of the Great Lakes where the species has been found.

Update: At least 5 Madison-area beaches closed due to blue-green algae

A massive blue-green algae bloom has forced the closure of several Madison-area beaches including a stretch of Lake Mendota from UW-Madison to Middleton.

Some paddlers wear costumes that are whimsical, while others have a message.

A major June 16 outbreak of cyanobacteria — called blue-green algae — started in Lake Mendota and flowed down the Yahara River in Madison.

The Yahara River in Madison was dotted with many pockets of dead fish like this after a major bloom of cyanobacteria formed on June 16 upstream in Lake Mendota. The bacteria can sicken or kill animals and humans. Fish likely died when decomposition of the vast bloom left water without oxygen. This photo was taken June 18 by a UW-Madison scientist.

The population of invasive zebra mussels has grown rapidly in Lake Mendota, threatening to fundamentally change the lake's ecosystem and worsen the impact of pollution from farms, UW-Madison experts say.

UW-Madison researchers say the invasive zebra mussel is spreading quickly in Lake Mendota. Above, dozens of the then -- and the stringy vegetation that grows near them -- are attached to a rock retrieved from near shore.