The banks of the Yahara River and its lakes were home to the densest concentrations of Indian earthworks ever built, with more varieties of spirit forms — sky, land and water beings — than anywhere else in the mound-building region.

All around the water more than 1,200 cone-shaped, linear and animal-spirit mounds were built from about 800 B.C. until roughly 1100 A.D.

Among those that can still be seen today is one of the largest known bird-shaped mounds, with a wingspan of more than 600 feet.

In all, the Yahara River system was home to about 160 mound groups, the largest packed with more than 50 overlooking Lake Mendota where Sherman Avenue today approaches the Yahara River and Tenney Park from the northeast.

“It’s obvious there is almost always a relationship between the mounds and the water,” said Larry Johns, who has seen many of the mounds that still exist, and searched for many more.

Nearly 30 years ago, Johns traipsed for months through Dane County parks and woodlots cataloging mounds that survived the construction of homes, farms and businesses that began in the 1800s.

Mound locations must be examined and described in a survey report to receive protection under laws enacted in recent decades.

However, Johns never finished his survey. The county and the state stopped funding the project not long after the county board majority rejected tougher local protections, he said.

A Wisconsin Historical Society database indicates that at least one mound has been cataloged in about 29 percent of the mound groups.

The historical society estimates that there is at least one mound surviving in about 36 percent of the original mound groups. Statewide, there are fewer cataloged and fewer surviving.

Johns, who traces his heritage to the Oneida Tribe of Indians of Wisconsin, believes there may have been thousands of mounds in the Madison area. He points to maps like one drawn in 1836 by Samuel Stone and Leandes Judson indicating several hundred mounds in a single section of the Isthmus.

Exactly why the mounds were built and why their construction stopped abruptly nearly 1,000 years ago remains shrouded in mystery.

But anthropologists say some things are known: Mounds are burial markers with great ceremonial, sacred and spiritual significance linked to the way native people identified with elements of the natural world.

The mound-builders must have considered Madison a very special place to have built so much here, Johns said.

By the same token, he believes the wholesale destruction of so many sacred sites has left some sort of stain on the place.

“These are sacred structures,” Johns said. “If you are going to try to understand Madison and the four lakes, you have to start here.”

He said he can’t quite put his finger on how Madison has been affected, but he finds it interesting that water quality in the lakes was never same after white settlers arrived.

There may be a few places along the Mississippi River with slightly greater density of mound sites, but no place has the variety found along the Yahara, said Amy Rosebrough, staff archeologist in the state historic preservation office.

“Madison is right in the dead center of the effigy mound region,” Rosebrough said.

Effigy mounds is the term used for animal- and spirit-shaped mounds.

While most of the mounds mapped by early European settlers have been destroyed, the area has a greater concentration of surviving mounds than other places, Rosebrough said.

Effigy mounds were built in parts of surrounding states, but the greatest level of activity was in southern Wisconsin with the Yahara lakes at its center.

In Dane County there were more than 200 examples of three major types of effigy mounds — depicting birds, mammals, and animal spirits associated with a watery underworld.

A group of conical mounds near where the Yahara River joins the Rock River may have been one of the first in the upper Midwest.

“The connection to water is very strong no matter where you go,” Rosebrough said. “Very, very few are not near a lake or river, and then often there are springs nearby.”

On Lake Mendota’s south side, clusters of mounds once stretched more than a mile above the site of natural springs in the Spring Harbor neighborhood.

Large groups were built at lake outlets and inlets.

After the Indians were pushed off the land in the 1830s, white settlers were astonished by the mounds. Rather than believe they’d been built by Indians they viewed as barbarians, whites who discovered the mounds as the Midwest was settled made up stories about a superior race, a lost tribe, that had created them.

When white settlers arrived here they found 22 effigy mounds embroidering a half-mile-long natural ridge that stood 70-feet high just west of Monona Bay. Running along a portion of what would one day be Park Street, the glacial moraine provided a stellar view of the area until it was quarried.

Between the 1880s and the 1920s the ridge’s sand and gravel were carried away to fill wetlands and build roads.

“The destruction of the Dividing Ridge was a crime which should never have been perpetuated,” Wisconsin Archaeological Society founder Charles E. Brown wrote in 1915. “It was one of Madison’s most charming scenic features.”

The black soil from the mounds was highly prized.

“People thought that mound soil was extremely fertile,” Rosebrough said. “They would haul it away for their gardens.”

The Ho-Chunk Nation has fought in the state Capitol and the courts to stop the destruction.

“Can you ever imagine yourself having to campaign to save a cemetery that your grandmother is buried in?” asked Jon Greendeer, Ho-Chunk executive director of heritage preservation. “To have to validate your grandmother’s resting place, you shouldn’t have to do that, but it happens when business and commercial forces want the lands.”

Tribes have had an uneasy relationship with archaeologists. But Greendeer said the scientific interpretation of effigy mound shapes representing animals and spirits meshes well with traditional Indian clan structures.

Many Indian people see themselves as descended from animal spirits through clans, with the roles and powers of each spirit being important to maintaining social and natural balance. Effigy mound shapes have parallels with the clan structure of many tribes that thrived in the Upper Midwest.

“These were the symbols of who we were, and our current clan system identifies all of them,” Greendeer said.

The mounds that have survived tend to be on public land. Sometimes there is disagreement on how to preserve them in a respectful way.

Faculty and students at Edgewood College asked Greendeer, Johns and others for advice on how to care for mounds in a brushy, wooded area bounded by chain-link fencing near Lake Wingra.

For now, there are no plans to manicure or mark the area because it is somewhat remote and could become a target for vandals.

Birmingham, the former state archaeologist who has written extensively about mound-builders, said religious rituals can be important in helping a society thrive by smoothing over friction when there is competition for resources.

“More and more we’re starting to understand that the places where native people lived in the past weren’t simply about where they could get food, but also were where there was spirit power,” Birmingham said.

Indians made offerings at natural springs in the the Yahara watershed. Their reverence and relationship with the water may help explain why white settlers said the lakes were crystal clear with white bottoms.

Native people saw little difference between the natural and the supernatural worlds, so it’s hard to see them polluting the water, Birmingham said. Sewage in the water, however, became a major problem for European settlers within a few decades.

Higher population density around the lakes probably was one reason, but the new inhabitants also brought with them a religion in which the supernatural world was much more separate from the land and water.

“Even today we see the land or the water only economically — how can these be used to make more money,” Birmingham said.

The earliest known cemetery sites in Wisconsin — before mound-building began — were established on knolls near rivers between about 4000 B.C. and 1500 B.C.

Near the end of that period, the dead were buried with valuables that had come from great distances — seashell ornaments and obsidian blocks, for example — and with ground up iron ore called red ocher. Those traditions continued when the first conical mounds were built around 800 B.C.

The animal-shaped effigy mounds were built from roughly 700 A.D. to 1100 A.D. It was a time when the pace of mound-building quickened, possibly because a warming climate made food more plentiful. Increased prosperity and exploration occurred in other parts of the world as temperatures rose.

And then mound building stopped quite abruptly. There is speculation but no firm answers on why.

The mystery surrounding the mounds is intriguing, said Carly Lincoln, who represents the Madison area in the Ho-Chunk Nation legislature. She said she is grateful that when she was young her father took her to see effigy mounds.

“It’s very important to make sure these are preserved, and honor why they are here, and even marvel at them,” Lincoln said. “I’m inspired by the fact that you don’t find these everywhere.”

"Antiquities of Wisconsin" by Increase Lapham

Madison was ranked 25th in the nation by the Pots, Planters & More.

Effigy mounds are important to Wisconsin’s heritage. They are burial mounds shaped like animals and spirits made by Native Americans as sacred…

A small, chicken-sized fossil was found in Wyoming over a decade ago. Now UW-Madison researchers have been able to connect it to the history and evolution of modern birds. 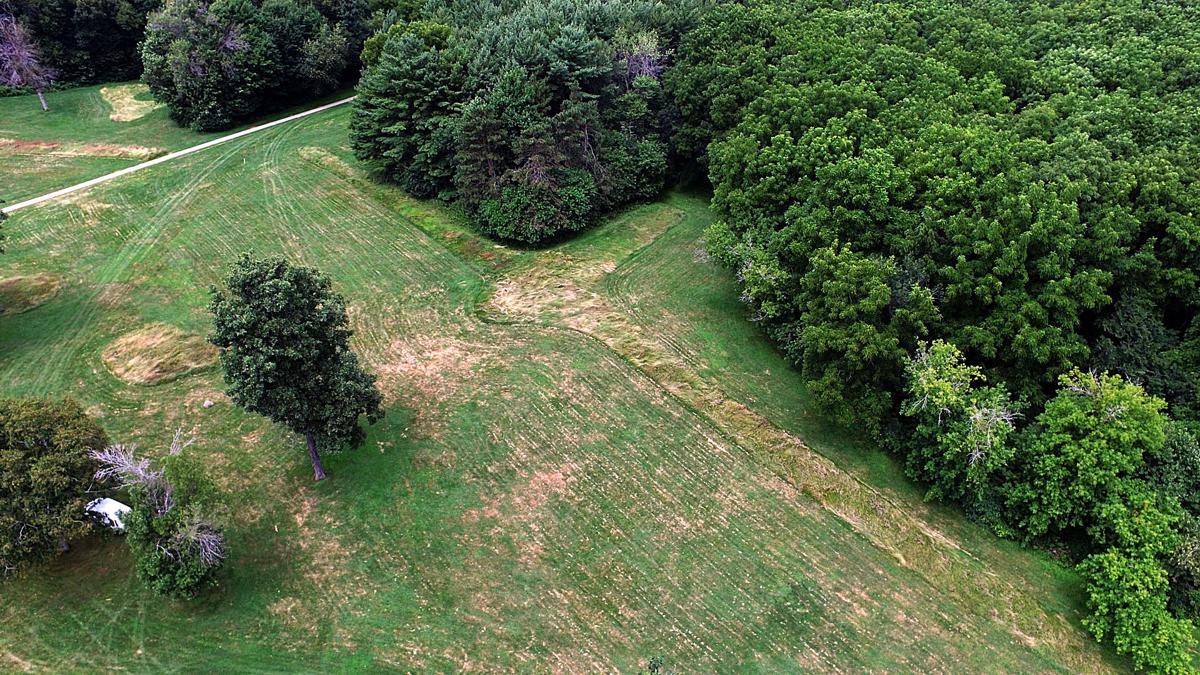 An aerial view of one of several Native American mounds on the grounds of Mendota Mental Health Institute, including a thunderbird, upper right. 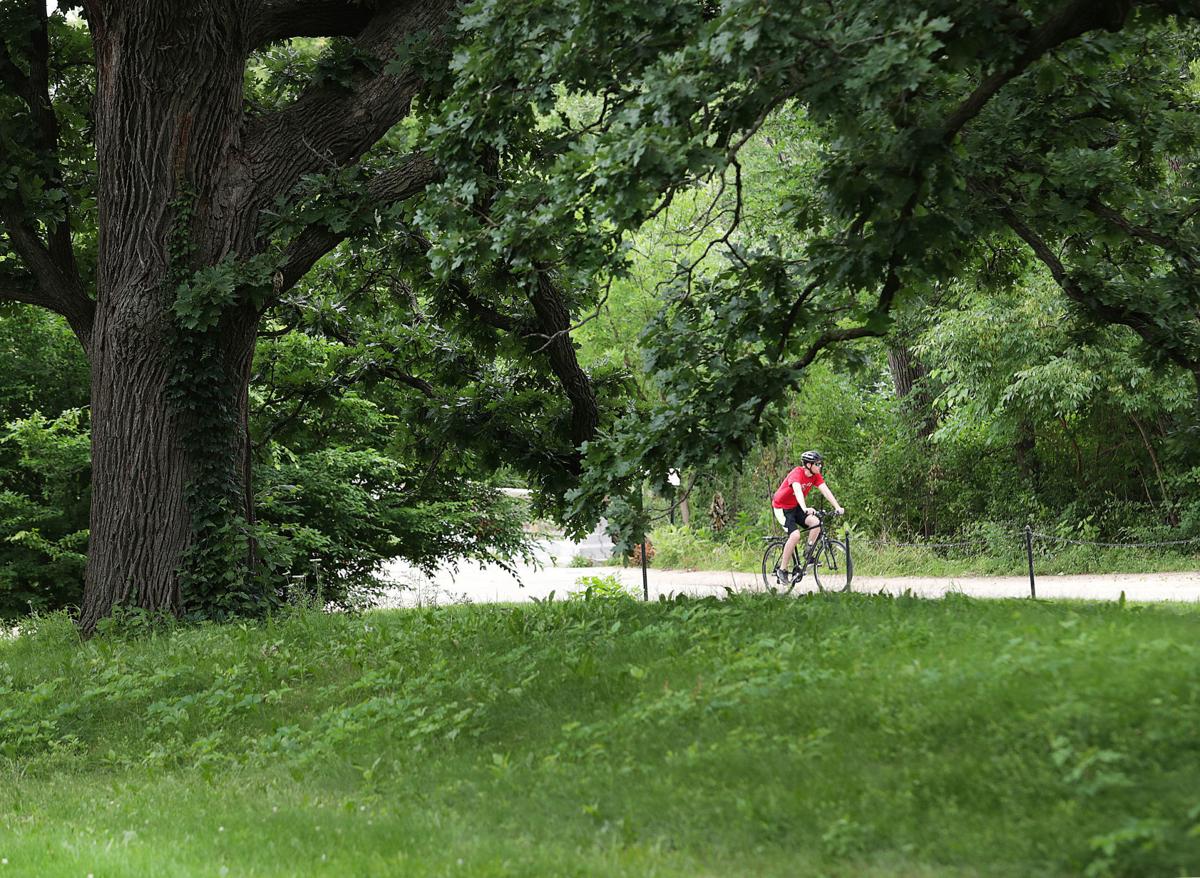 A cyclist passes the rise of a Native American mound along the Lakeshore Path on the campus of UW-Madison. The mound is one of hundreds in the Madison area. 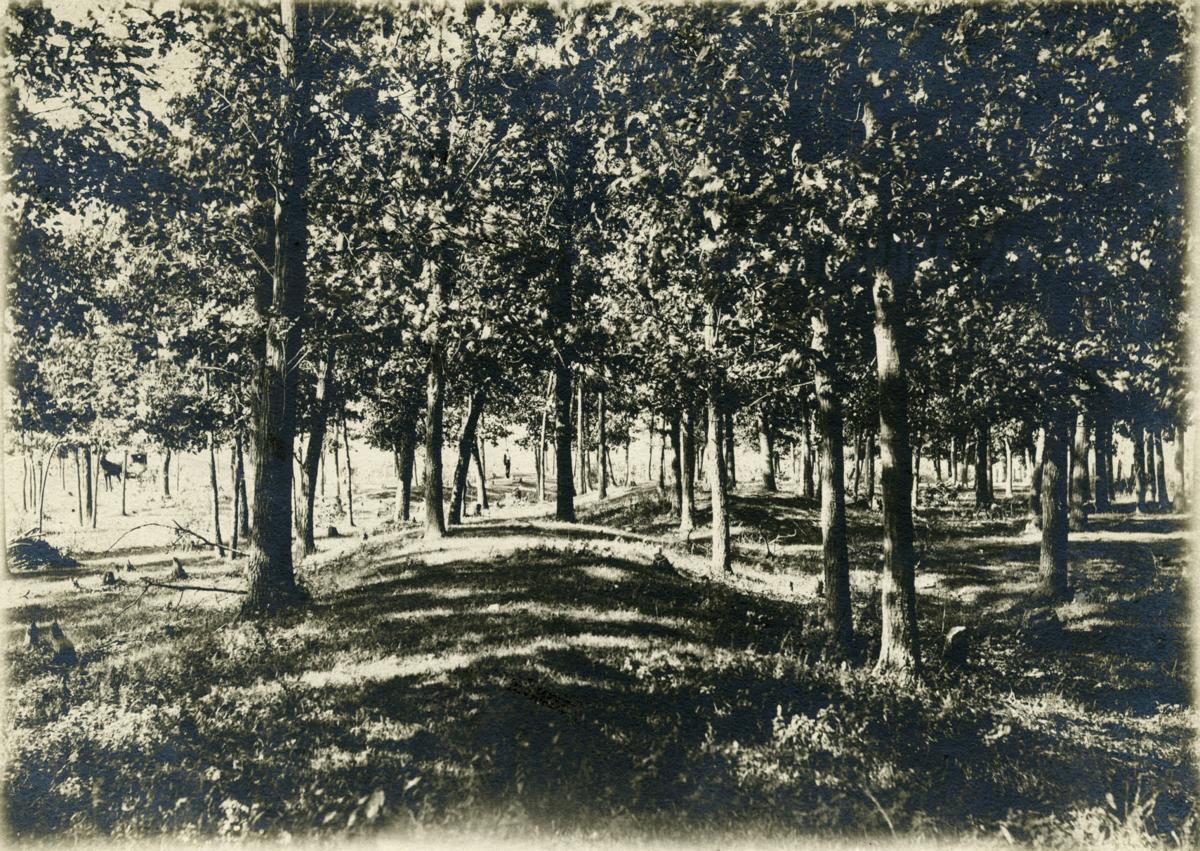 This 1905 photo provides a view of three linear burial mounds at the Sure-Johnson site near Mud Lake south of McFarland. Sites like this were often looted by people looking for bones and antiquities, said Robert Birmingham, a former state archaeologist. 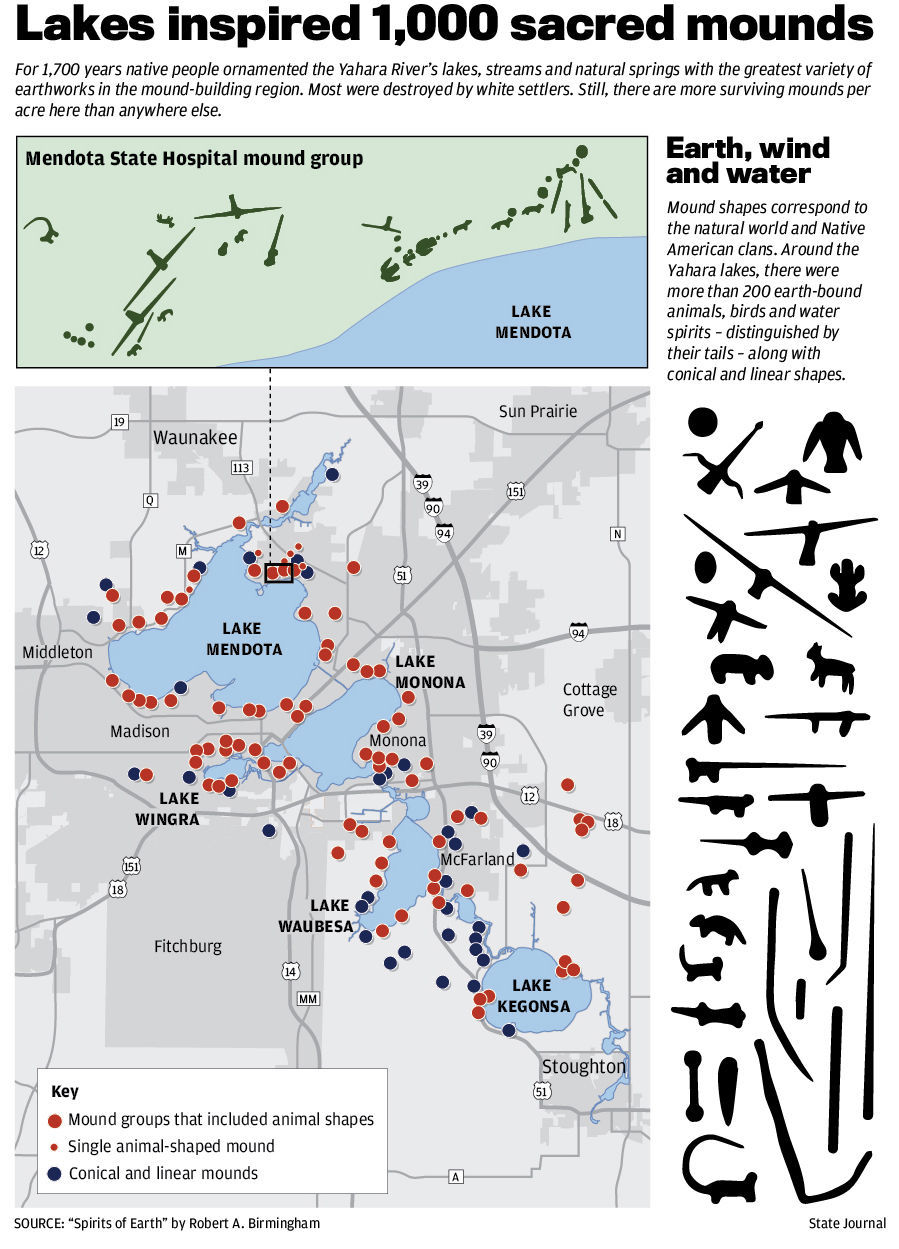