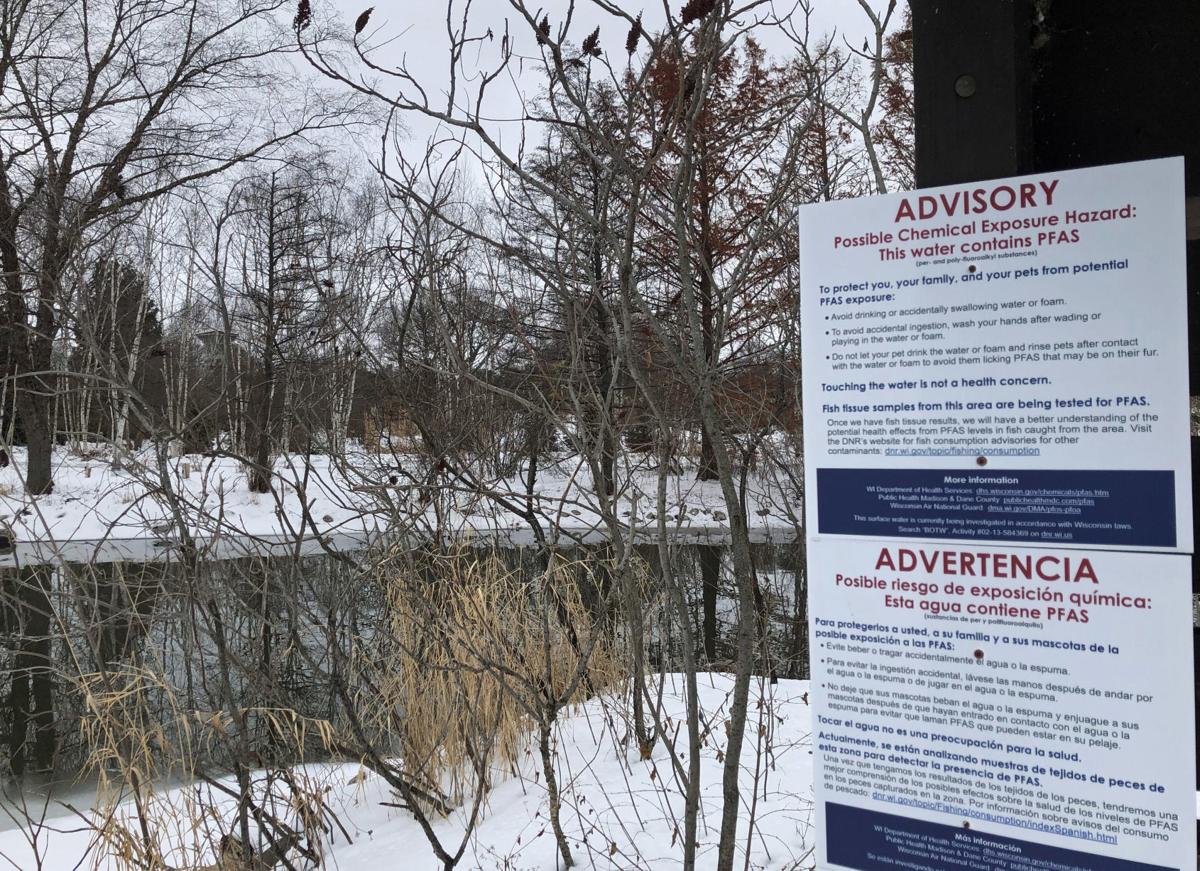 Signs posted in December by Public Health Madison & Dane County caution against consuming water from Starkweather Creek, which is contaminated with hazardous chemicals known as PFAS. Officials have yet to post notice of a health advisory issued earlier this month for consumption of fish from the creek. 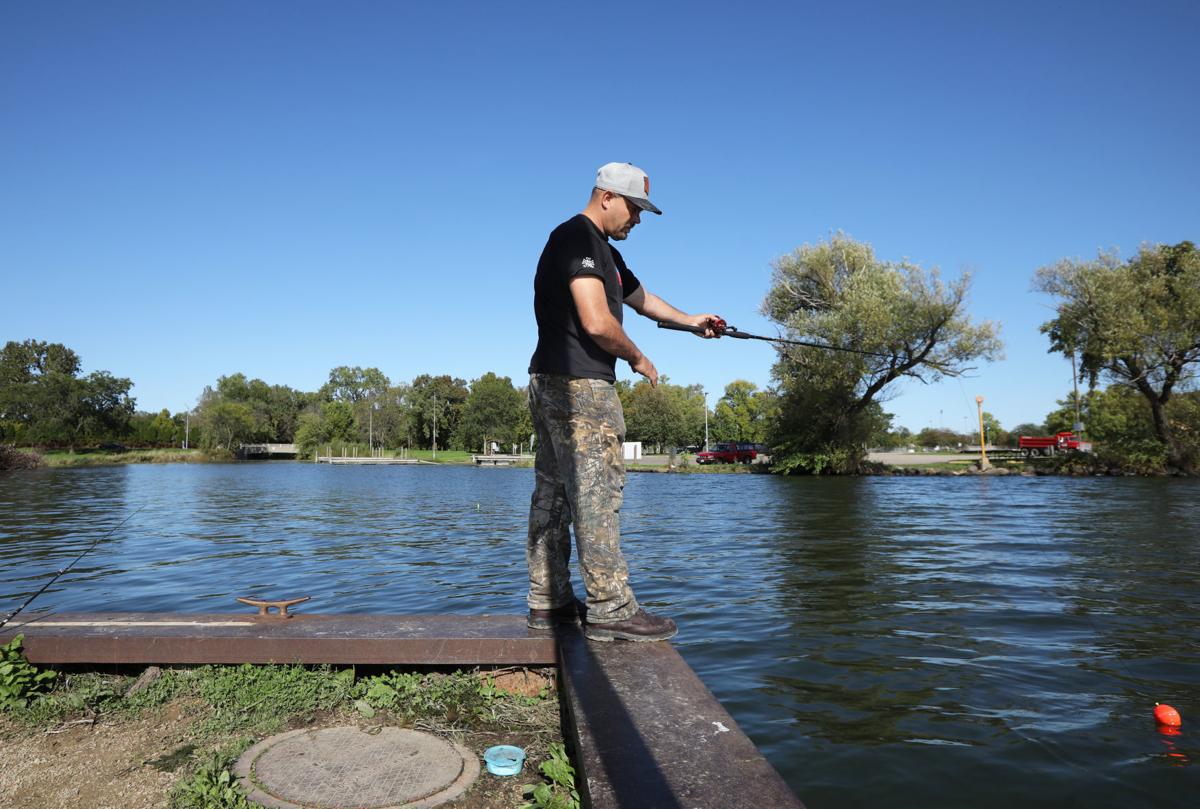 John Fox, of Madison, fishes for muskie where Starkweather Creek enters Lake Monona on Madison's East Side. High levels of PFAS have been found in water and fish from the creek. Cleanup of upstream PFAS contamination has been delayed 60 days because of the COVID-19 pandemic. 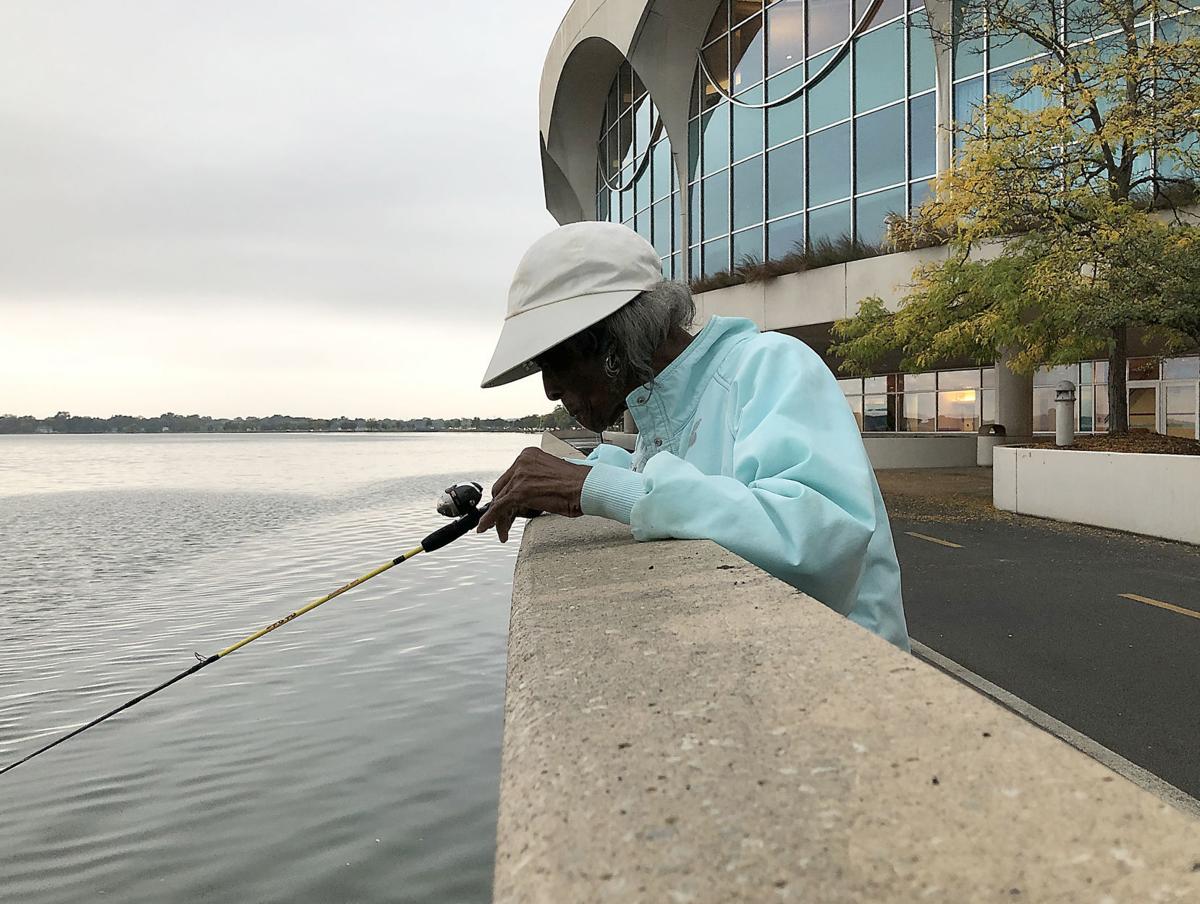 Georgia Gordon, of Beloit, fishes in Lake Monona near Monona Terrace on Tuesday. Gordon, 83, said she's been coming to the lake for years, catching mostly bluegills and crappies, which she brings home to cook. She had not heard reports of PFAS contamination at a nearby storm sewer outlet after a July 19 transformer explosion at a Downtown substation, which an environmental watchdog said could make fish unsafe for consumption.

On March 13, nearly two years after first ordering the Wisconsin Air National Guard to clean up hazardous chemicals at the Madison airport, the Wisconsin Department of Natural Resources issued a new set of deadlines.

Less than a month later, with a statewide health emergency hindering virtually all activity, the DNR granted the guard yet another extension to address the pollution working its way into Starkweather Creek, Lake Monona and the groundwater that feeds Madison’s public wells.

Those are two examples of how the COVID-19 pandemic response has hindered environmental monitoring and cleanup. But a lack of transparency measures make it impossible to know the full impact of state and federal emergency policies.

In the early days of the pandemic response, the Wisconsin Department of Natural Resources and the federal Environmental Protection Agency each issued temporary orders that loosened some of the usual requirements.

The DNR said it would prioritize imminent threats to public health while pulling back routine field inspections and audits. While saying regulated entities “should make every effort to comply,” the DNR created a system for businesses to request waivers from monitoring and cleanup requirements.

“We said call us and we’ll work through this individually,” said Darsi Foss, the agency’s environmental management administrator.

The EPA announced far more sweeping relaxation of environmental rules, allowing factories, power plants, refineries and other regulated industries to decide if they could comply with regulations.

Nicole Cantello, president of the union representing employees of the EPA’s Great Lakes region, called the federal policy “a gift to polluters.”

“I think that policy was absolutely unprecedented in the history of EPA,” said Cantello, an enforcement attorney who has been with the agency for three decades but was speaking on behalf of the union. “No one came to Region 5 and said we need relief during the pandemic.”

While companies are encouraged to report any instances of noncompliance under the temporary enforcement policy, the EPA says if that is “not reasonably practicable” they should document the lapse internally and tell the agency about it “upon request.”

The Natural Resources Defense Council has sued the EPA in an effort to require the agency to track and disclose any lapses in monitoring and reporting, which it said leaves neighboring and downstream communities unable to react to spills or air pollution.

Cantello said the policy also leaves the EPA in the dark.

In response to a question about the number of non-compliance reports, the agency provided a statement, saying “as a policy, EPA does not comment on enforcement sensitive matters.”

Citing a recent analysis by the Harvard School of Public Health that showed air pollution makes some people more vulnerable to COVID-19, Howard Learner, executive director of the Environmental Law and Policy Center, said the policy “threatens to make a bad situation worse.”

Learner notes the emergency policy comes after years of cuts to staff and enforcement budgets that have coincided with an increase in the number of facilities out of compliance, documented in an ELPC report released last month.

“EPA’s enforcement program is concerned with outcomes, not outputs,” the agency said in a statement. “We don’t set quotas for enforcement cases.”

The agency blamed data reporting issues in some states for the increase in noncompliance numbers, which it said had declined nationally over the past year.

Bob Graham, a Chicago attorney who specializes in environmental compliance, said most businesses want to protect the environment but a lack of regulation puts them at a disadvantage.

“I think companies who want to do the right thing want uniform treatment for all consistent with uniform enforcement,” he said. “They want to know whether other similarly situated entities are fulfilling their obligations as well. … You want fairness for all.”

State environmental groups have given the DNR high marks for its handling of the crisis, saying the agency has been flexible while maintaining environmental standards.

“They’re not changing standards, but they are trying to provide reasonable flexibility with reporting and realizing they can’t get face-to-face with their customers,” said Fred Clark, a former DNR forester and state representative who now heads the conservation group Wisconsin’s Green Fire.

But aside from half a dozen requests filed through a website, the DNR cannot say how many requests for variances it received or granted. Foss said it would take weeks to compile a list of waivers, which in most cases were made through phone calls and emails to compliance officers across the state, though she said requests like the one for Truax were “minimal.”

The lack of public information has led to calls for more transparency.

“As the state grapples with longer-term disruptions from COVID-19, we believe requests for exemptions should be centrally collected and made available to the public,” said Tony Gibart, executive director of Midwest Environmental Advocates.

Gibart said he’s “heartened” that the DNR seems to be emphasizing compliance but said the public deserves to know who’s asking for waivers, even if they aren’t granted.

“In the last weeks, the public has heard from commerce groups that say they are able to reopen for business safely,” Gibart said. “The public should also be able to know when a business, such as Tyco, is privately telling the DNR that it cannot safely comply with fundamental public health protections.”

Tyco resumed testing wells last week, according to the DNR, though some residents with contaminated wells questioned why it was necessary to stop when the company was considered an essential business and continued making fire suppressant.

“They unilaterally have said they’re not going to test during the pandemic,” said Chuck Boyle. “They sure continue to make the employees come in.”

Boyle said Tyco could simply take water from a spigot without coming inside.

Maria Powell, executive director of the Midwest Environmental Justice Organization, said she understands that the National Guard is busy with the COVID-19 response but questions why work was delayed before the pandemic.

“Cleanup of PFAS at the base should have begun a long time ago — and should be well underway by now,” Powell said. “Some of the cleanup could be done by now if they had started two years ago.”

With the state beginning to reopen the economy, Foss said the DNR is now working to figure out how to resume some field work even as the virus remains a threat for months to come.

“I think there’s going to be a new normal, but I don’t know what that looks like,” she said. “What we’re doing right now can’t last forever. We do need more interaction and oversight. It’s just a matter of how to get that done.”

[Editor's note: This story has been updated to reflect a correction. The original incorrectly characterized the scope of PFAS contamination in the Marinette area. Tyco Fire Products is testing hundreds of private wells. PFAS have so far been detected in 68 of them.]

With the economy crippled by the response to the COVID-19 pandemic, the Madison Water Utility is trying to put the brakes on a rate hike that would cause the average residential water bill to jump 13%.

Midwest Environmental Advocates dropped the case against the county when the county provided the records almost a year after the initial request was filed, and agreed to pay a little more than $6,000 in court costs and damages.

The number of people who have died from the COVID-19 coronavirus in Wisconsin has reached 400, while the number of confirmed cases passed 10,000 as of Sunday, health officials reported.

Signs posted in December by Public Health Madison & Dane County caution against consuming water from Starkweather Creek, which is contaminated with hazardous chemicals known as PFAS. Officials have yet to post notice of a health advisory issued earlier this month for consumption of fish from the creek.

John Fox, of Madison, fishes for muskie where Starkweather Creek enters Lake Monona on Madison's East Side. High levels of PFAS have been found in water and fish from the creek. Cleanup of upstream PFAS contamination has been delayed 60 days because of the COVID-19 pandemic.

Georgia Gordon, of Beloit, fishes in Lake Monona near Monona Terrace on Tuesday. Gordon, 83, said she's been coming to the lake for years, catching mostly bluegills and crappies, which she brings home to cook. She had not heard reports of PFAS contamination at a nearby storm sewer outlet after a July 19 transformer explosion at a Downtown substation, which an environmental watchdog said could make fish unsafe for consumption.