MCCALLISTER — Gabe Stelzer is drawn to rivers despite growing up near Lake Michigan.

As a child he chased steelhead trout on the Branch River in Manitowoc and for the past three years has been fishing for muskie on the Wisconsin River between classes at UW-Stevens Point.

But the 21-year-old college senior pursuing a degree in secondary education is most at home when he’s at the center of his drift boat floating over prime habitat for smallmouth bass on the Menominee River.

Stelzer is a fishing guide on the 116-mile river that creates a winding border between northeastern Wisconsin and Michigan’s Upper Peninsula. He has no intention of giving up his summer gig once he graduates from college and begins his career as a teacher.

“I can’t see myself ever losing my affinity for this,” Stelzer said last week as he rowed toward another fishing spot. “I love it. This is home. It seems ridiculous that I get paid to do this.”

The river, named after the Menominee Indian Tribe of Wisconsin, is filled with rock bars, holes, submerged trees, massive boulders and flats of weeds. These are ideal homes for the powerful bronze-colored fish that feed on crayfish, frogs, minnows and dragonflies. The habitat also attracts those from around the country armed with fly rods and baits that mimic the smallmouth’s diet.

Stelzer, and many others here, are hoping those conditions remain intact for generations and that a proposed mine in Michigan next to the river never comes to fruition.

Over the past five years, Aquila Resources in Toronto has been working to secure permits to construct what it is calling the “Back Forty Mine.” Located on a sulfide deposit near the Sixty Islands stretch of the river just east of the Marinette County community of Amberg, the Menominee County, Michigan, site contains approximately 1.1 million ounces of gold and 1.2 billion pounds of zinc, would provide an estimated 250 jobs and pump millions of dollars into the local economy, according to the company.

But those opposed to the project, including Native American tribes, environmentalists and citizens who live near the mine and along the river, say the 83-acre, 750-foot-deep open pit mine would use cyanide to extract and process gold, zinc, copper and silver and that wastewater would be discharged into the Menominee River. They contend that the mine “poses a significant threat to the cultural and natural resources of the Upper Peninsula, Wisconsin, and the Great Lakes region” and that there is “significant threat” of sulfuric acid leaching harmful heavy metals, including copper, cadmium, arsenic, lead and mercury that could contaminate groundwater and the river, which empties into Lake Michigan.

In January, a Michigan administrative law judge denied a wetlands permit for the project, and in May Aquila announced it would not appeal the judge’s ruling. However, the company is moving forward with a feasibility study that evaluates other open pit configurations and an underground mine operation. The study, scheduled to be completed by the end of this year, also looks at modifying the mine’s footprint. To help facilitate the project, Aquila sold most of its interests in copper and gold projects in the northern Wisconsin counties of Marathon and Taylor to a startup company for about $5.8 million.

“We are committed to advancing the Back Forty project with a collaborative approach that integrates feedback from the community,” said Guy Le Bel, Aquila’s president and CEO. “Our goal is to design, build and operate a 21st-century mine in sync with American values of safety, quality work, leading-edge technology, and environmentally responsible mineral extraction. The resulting mine will offer over a decade of net benefits to local and regional communities while being protective of the environment.”

Gussie Lord, an attorney for Earthjustice, a nonprofit public interest organization dedicated to litigating environmental issues which is representing the Menominee Tribe, said they “will remain vigilant” in light of Aquila’s plan to submit another proposal once the feasibility study is completed.

“The state of Michigan should realize that Aquila Resources has never been honest, nor transparent, about its plans, and that this project cannot be built without pollution, impairment and destruction of the Menominee River and its ecosystem,” Lord said.

Fishing partner Jason Klein and I had spent last weekend fishing for muskie, smallmouth and crappie on lakes in Vilas County. On Sunday, Klein’s father, Jack, who lives in Presque Isle, was at the helm of a three-man float boat as Jason and I casted for smallmouth on a 4-mile stretch of the Manitowish River just south of Mercer. Our thoughts on the trip were focused on finding fish, not getting snagged on trees and keeping a lookout for sand bars that could bring our boat to a temporary stop.

But Monday’s trip on the Menominee River, while also focused on smallmouth, included talk about the mine, the future of the river and the summer career for Stelzer, who works as a guide for Tight Lines Fly Fishing Co. based in De Pere. The company, which has been offering trips since 2001, runs multiple floats a day on an 80-mile stretch of the river and has been active in promoting the resource and drawing attention to the proposed mine.

In 2020, a film crew from MeatEater, which produces the Netflix show “Das Boot,” accompanied Tight Lines owner Tim Landwehr on a trip down the river. Footage that wasn’t used in the episode was incorporated into a short film that was part of the 2021 National Fly Fishing Film Tour.

“Fighting a mine like this takes an army of soldiers that all care,” Landwehr told MeatEater. “We couldn’t fight it with money like giant companies can, but we sure as hell could fight it with a never-ending love for the resource. We as a guide crew decided a few years ago that in order to protect the place we love we needed to show people how amazing it is.”

Our eight-hour, 7-mile trip began just below the Grand Rapids Dam and terminated at Menominee River Park near the intersection of highways 180 and X in Marinette County. The water levels were low and at times forced Stelzer to hop out and drag the boat over extremely shallow spots of the river.

We saw a pair of fawns on an island. Eagle and osprey soared above, turtles lounged on rocks, and there were sturgeon, some more than 4 feet long. A few breached the surface, but we spotted several basking in the shallows. We didn’t see any otter, but the shoreline was littered with spent clam shells, a favorite food of the curious, whiskered critter.

Stelzer, who is in his second year of guiding, caught his first smallmouth on the river when he was 12 years old and has been hooked on the Menominee ever since. Even though the bass were finicky on this day, Stelzer knows the potential and wants to make sure others know about the fish and the river’s future.

“This is a fantastic body of water, but fish have moods,” Stelzer said. “It would be a shame to see (the river) changed or polluted in any way. It’s worrisome to think a few hundred jobs could outweigh a resource that needs to be preserved.”

The Pleasant Rowland Foundation is donating $100,000 as a lead gift to start an endowment that will be used to add elements of accessibility across the Madison parks system.

The U.S. Air Force last year selected Truax Field to host a squadron of the fighter jets, and construction of a simulation facility was slated to begin in May in anticipation of the 2023 arrival of the F-35s.

A team of maritime archeologists from the Wisconsin Historical Society is documenting the scores of wrecks in the 962-square-mile Wisconsin Shipwreck Coast National Marine Sanctuary. 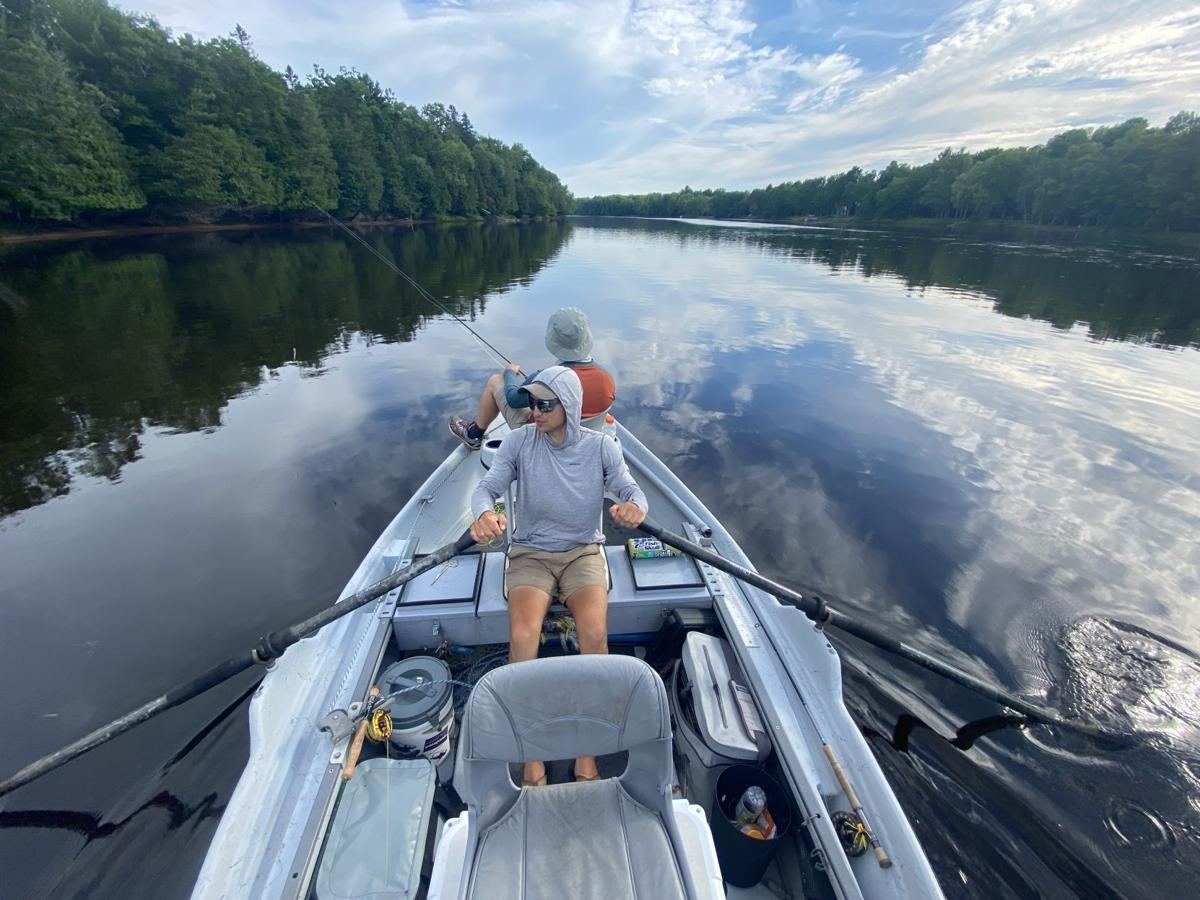 Gabe Stelzer rows his drift boat down the Menominee River as he puts his clients in position to cast for smallmouth bass. Stelzer, a guide for Tight Lines Fly Fishing Co. in De Pere, is concerned about a proposed mine that could be built next to the river in Michigan's Upper Peninsula. 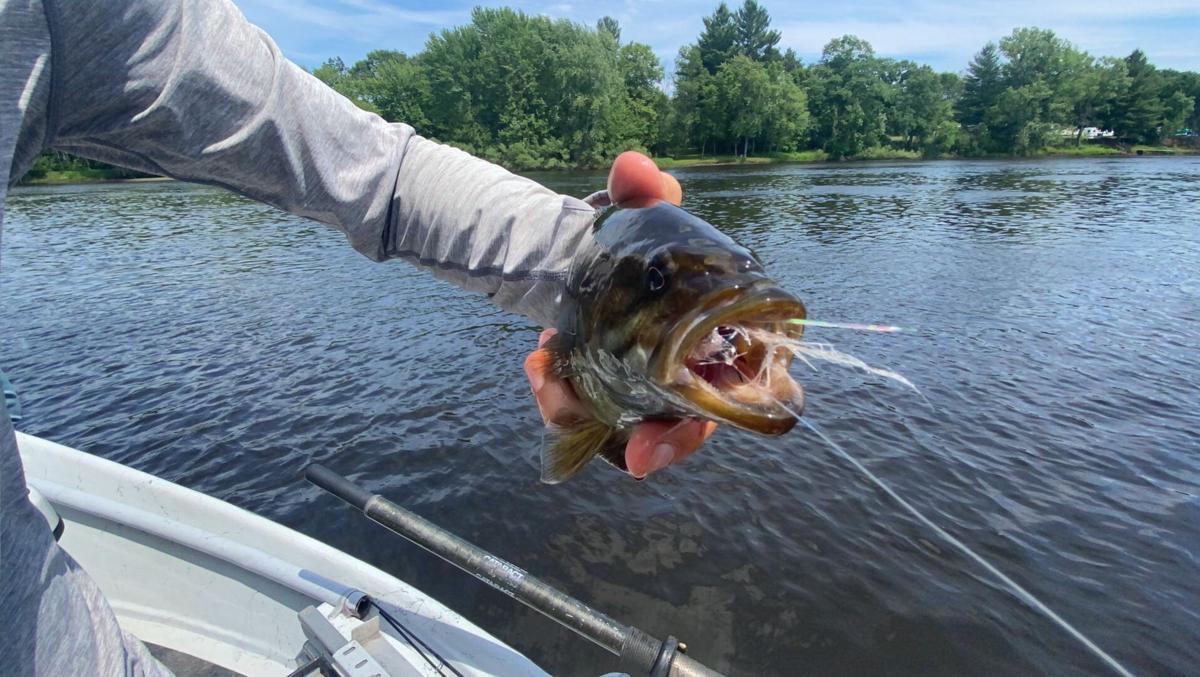 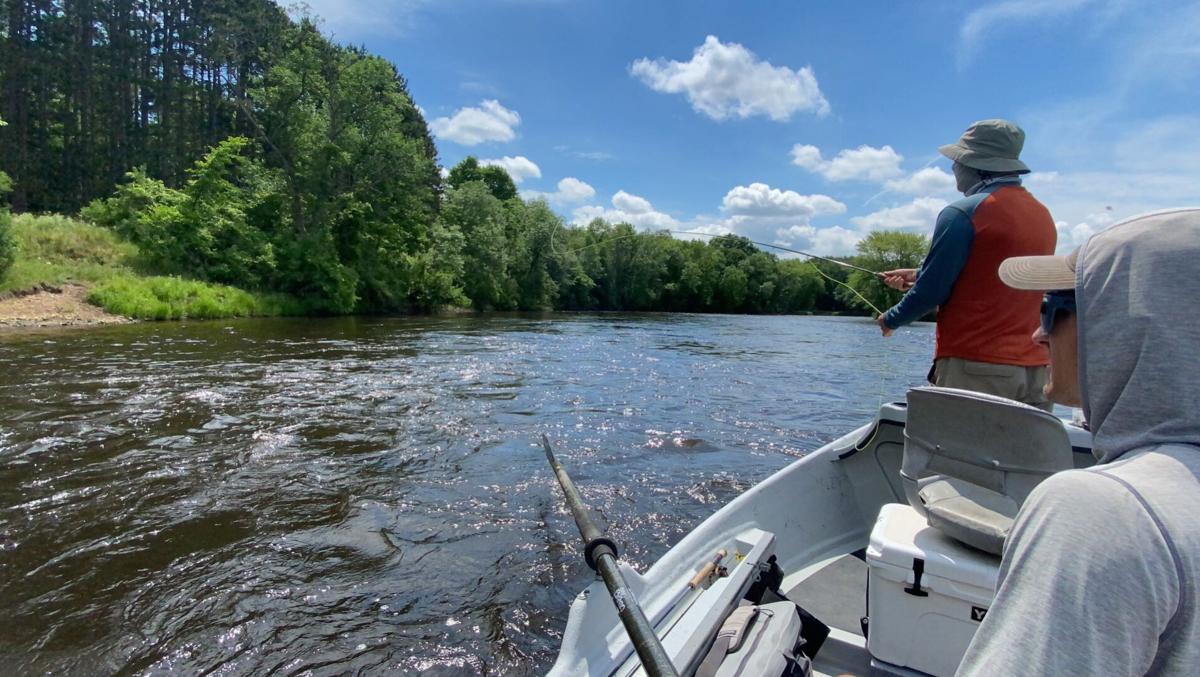 Jason Klein, of Madison, makes a cast with his fly rod last week as guide Gabe Stelzer offers up pointers in pursuit of smallmouth bass on the Menominee River. A Canadian company wants to build a gold and zinc mine near the river, but is facing fierce opposition from anglers, environmental groups, local citizens and Native American tribes. 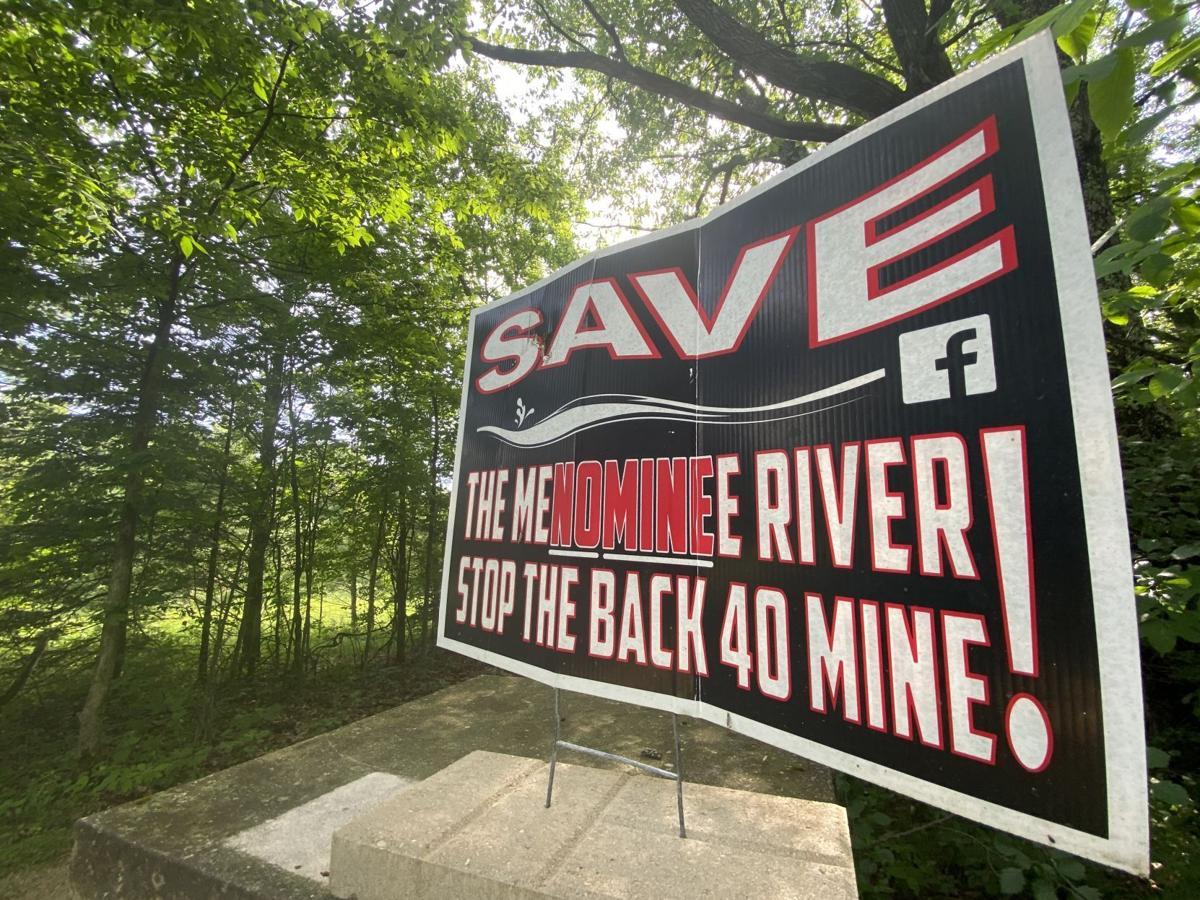 Signs like this are common along the Menominee River in Marinette County and Michigan's Upper Peninsula. A Canadian company wants to build a mine near the river, but is facing fierce opposition. 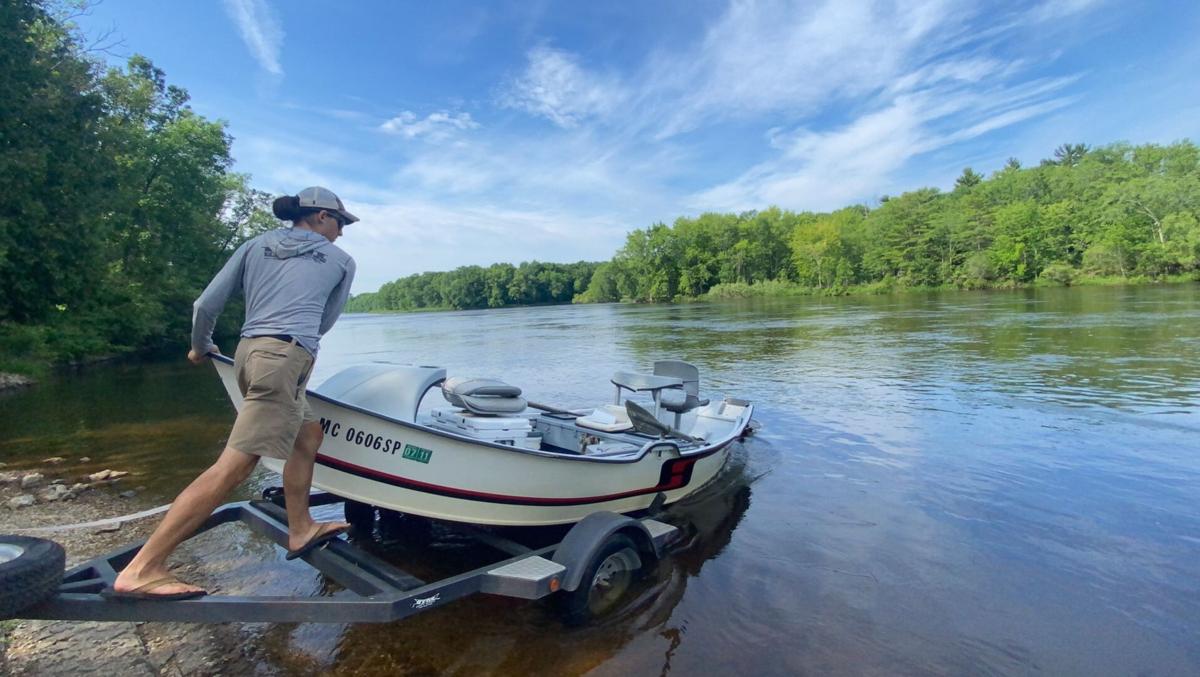 Gabe Stelzer launches his drift boat last week on the Michigan side of the Menominee River just below the Upper Peninsula's Grand Rapids power dam. 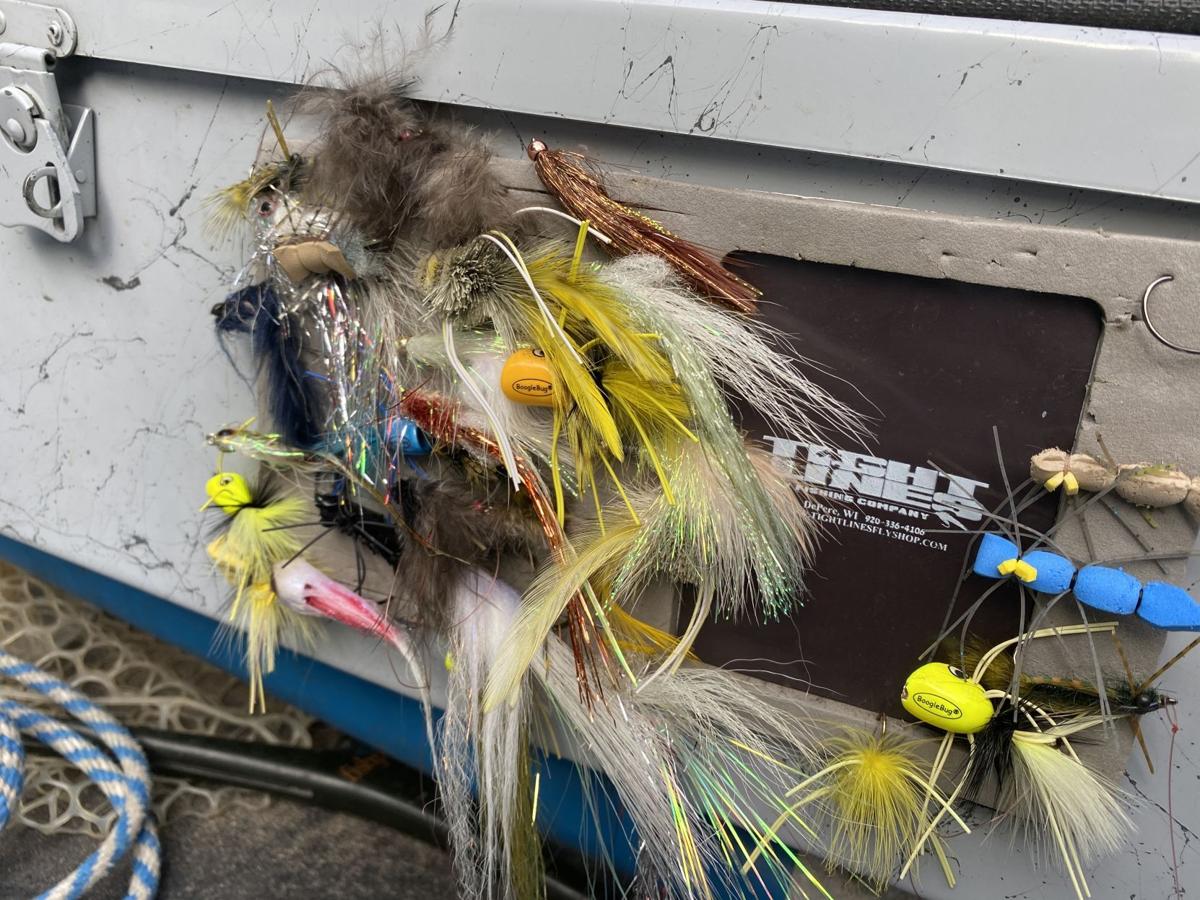 A collection of flies in the drift boat owned by guide Gabe Stelzer. 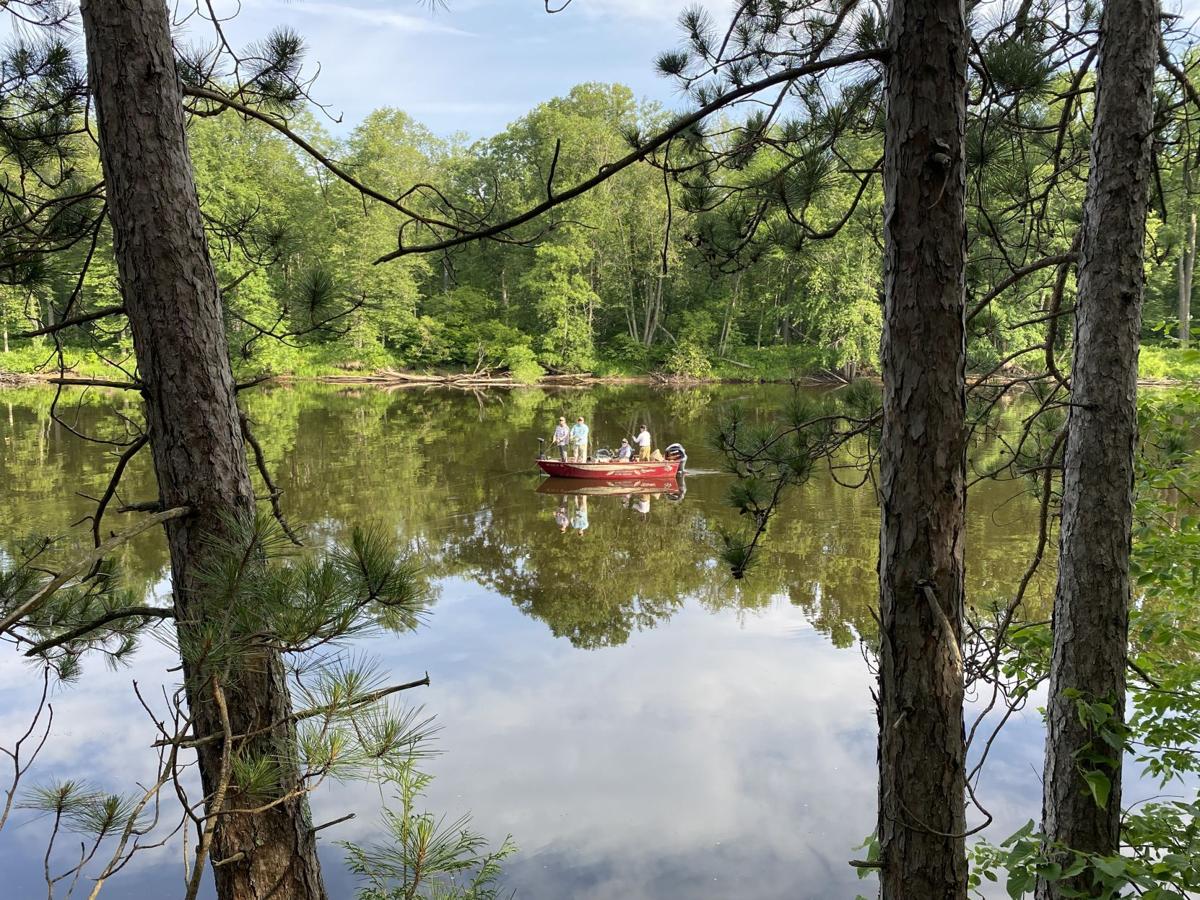