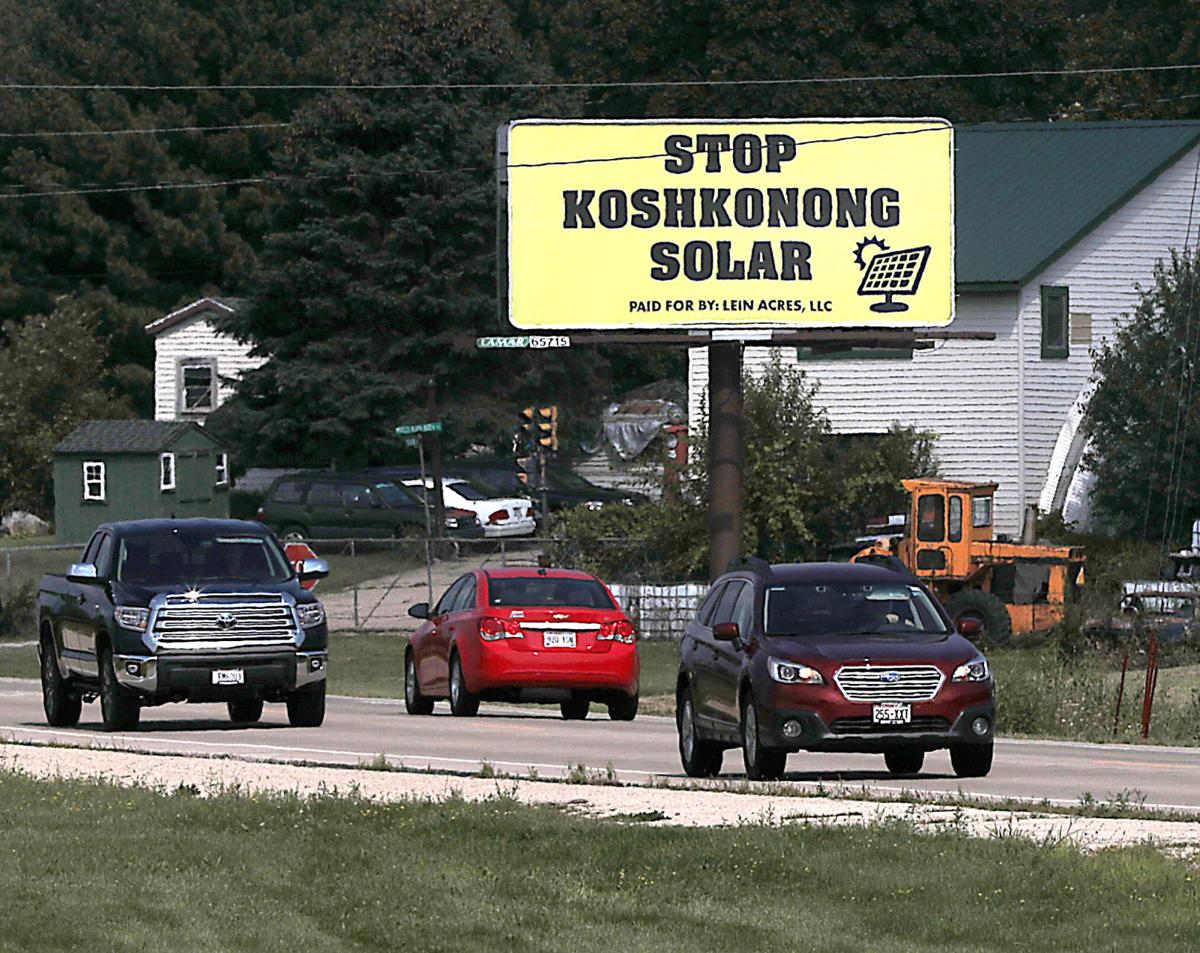 The proposed 2,400-acre Koshkonong Solar Energy Center has sparked opposition from area residents and the village of Cambridge, which wants some of the land for housing, as well as from neighbors who don't want to live near fields of solar panels. 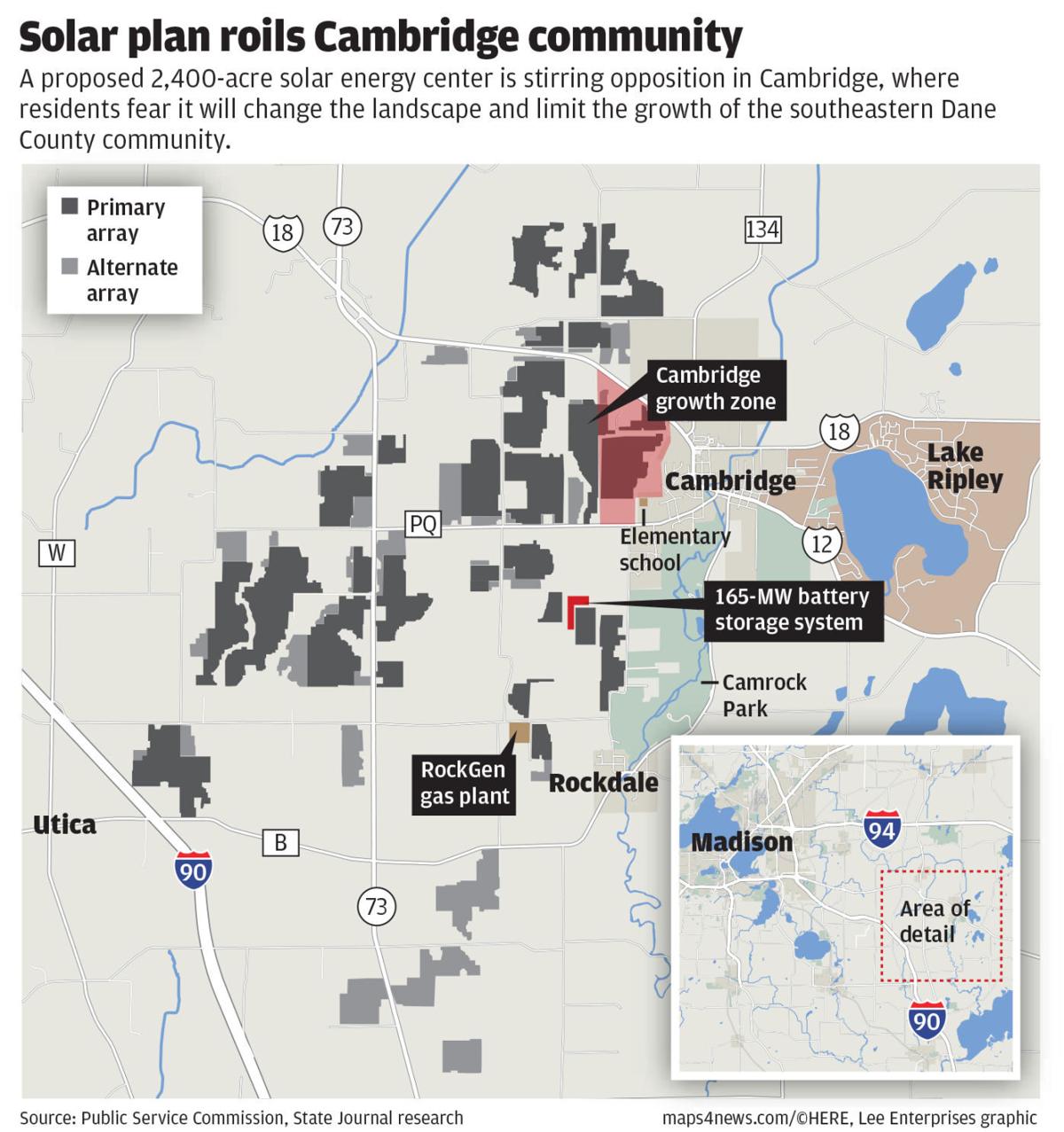 Opponents of a Dane County solar farm say the developer and utilities are exploiting a legal loophole to avoid regulatory scrutiny of what would be the state’s largest renewable energy source.

Invenergy, a Chicago-based developer, is seeking a permit to build a 300-megawatt solar plant on about 2,400 acres west of Cambridge that would include a 165-megawatt battery storage system. Three utilities, including We Energies and Madison Gas and Electric, are seeking to purchase the project for $649 million.

The town of Christiana, along with residents Roxann Engelstad and Edward Lovell, have asked the Public Service Commission to deny the project’s permit application, claiming Invenergy is “misusing” the process.

“This proceeding is not designed or directed at processing an application for what Koshkonong is intended to be — a utility-owned power plant,” attorney Frank Jablonski wrote in a brief supporting the motion to deny the permit.

When regulated utilities like MGE build infrastructure, they pass on the costs — plus about 10% in profits — to ratepayers. So they must show that a project is not only needed but also more cost-effective than other alternatives.

Independent producers can also build and operate power plants and sell the energy to utilities. Since there’s no risk to ratepayers, these “merchant plant” applications aren’t subject to the same cost and needs analysis.

Just days after Invenergy filed its application to build a merchant plant, the utilities announced plans to buy it.

The utilities will need a separate permit to buy the plant, and that application process includes a review of need, cost and alternatives.

But Jablonski argues the acquisition review is less rigorous when it comes to evaluating the environmental impact and studying alternatives. By using the two-step process, he said, the utilities are evading the public interest scrutiny and Invenergy is evading the risks involved with building a merchant power plant.

“They are trying to loophole-lawyer their way around those requirements,” Jablonski said.

Invenergy says its application for the Koshkonong Solar Energy Center complies with all laws and regulations.

“Fundamentally, (the opponents’) position is that they do not like the regulatory process to which a project like this is subject,” attorney Jessica Polakowski wrote in her brief to the PSC. “The Commission is charged with applying the law as it is; not as the Intervenors wish it or claim it to be.”

The PSC is scheduled to consider the denial request Thursday, though it has rejected previous challenges to the two-step permitting process, which has been used in eight of the 11 large-scale solar farms approved to date.

The utilities deny they are using a loophole.

Matt Cullen, a spokesperson for We Energies’ parent company, said Koshkonong is no different from those other projects.

“In each circumstance, we and other utilities have worked in a public and transparent manner when asking the PSCW to approve our acquisition of these projects.”

The Koshkonong project has spotlighted the tensions as Wisconsin utilities seek to spend billions of dollars replacing coal-fired power with clean energy, which does not produce heat-trapping gases but requires far more land.

Solar opponents say the project will forever change the rural landscape around Cambridge and landlock the bedroom community, which has little other land available for new housing.

Others question whether utility investments in large-scale projects are the most cost-effective solution or the best policy.

“What the PSC seems to have decided is we are going to subject apparently hundreds of square miles of Wisconsin farmland to solar panels. That’s a big decision,” Jablonski said. “What’s happening is that’s being developed incrementally using these loopholes.”

The Citizens Utility Board, which represents ratepayers, has not raised the permitting issue since the commission made clear it doesn’t have a problem with the practice.

But executive director Tom Content said it points to a larger problem.

Unlike Minnesota, Wisconsin does not require utilities to go through a comprehensive planning process. As a result, Content said, utilities focus almost exclusively on the supply side rather than finding ways to shave peak demand and avoid the need for costly investments.

“The risk of our current system — it’s disjointed but it also risks overbuilding. The PSC doesn’t have an ability to take into account the big picture,” Content said. “Right now the investors on Wall Street have more information sometimes than the PSC on the utilities’ decarbonization goals and plans.”

Editor's note: This story has been updated to correct the location of the Koshkonong Solar Energy Center. The proposed facility is west of Cambridge.

The DNR said “the statutory process and associated firm timelines established by the Legislature do not allow adequate time for the department to complete this proposed rule.”

The average residential customer will pay about $4 more per month for electricity and an extra $1 for natural gas next year, according to PSC estimates.

The proposed 2,400-acre Koshkonong Solar Energy Center has sparked opposition from area residents and the village of Cambridge, which wants some of the land for housing, as well as from neighbors who don't want to live near fields of solar panels.