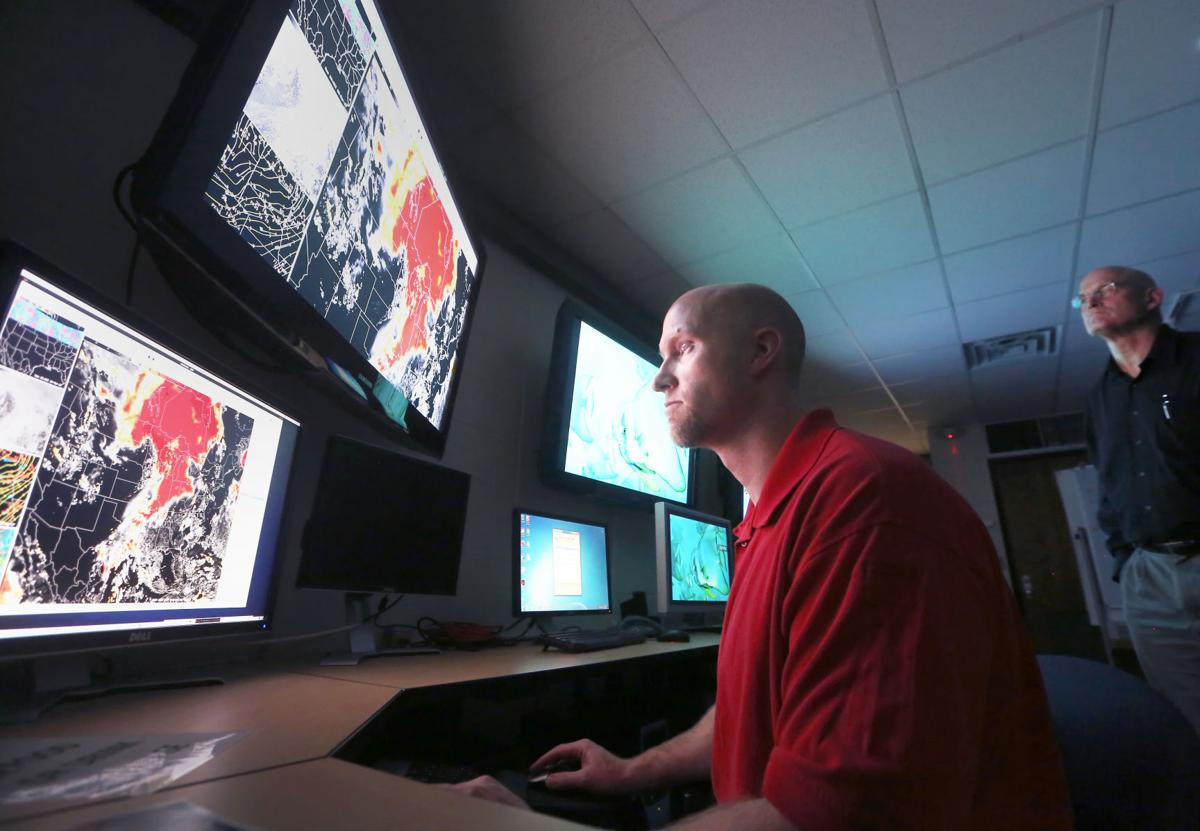 UW-Madison researchers Lee Cronce, left, and Steve Ackerman view weather data received from National Oceanic and Atmospheric Administration in the university's Cooperative Institute for Meteorological Satellite Studies in Madison. Nearly 175 scientists and others could be affected by budget cuts proposed for the NOAA, which funds weather, climate and lake research. 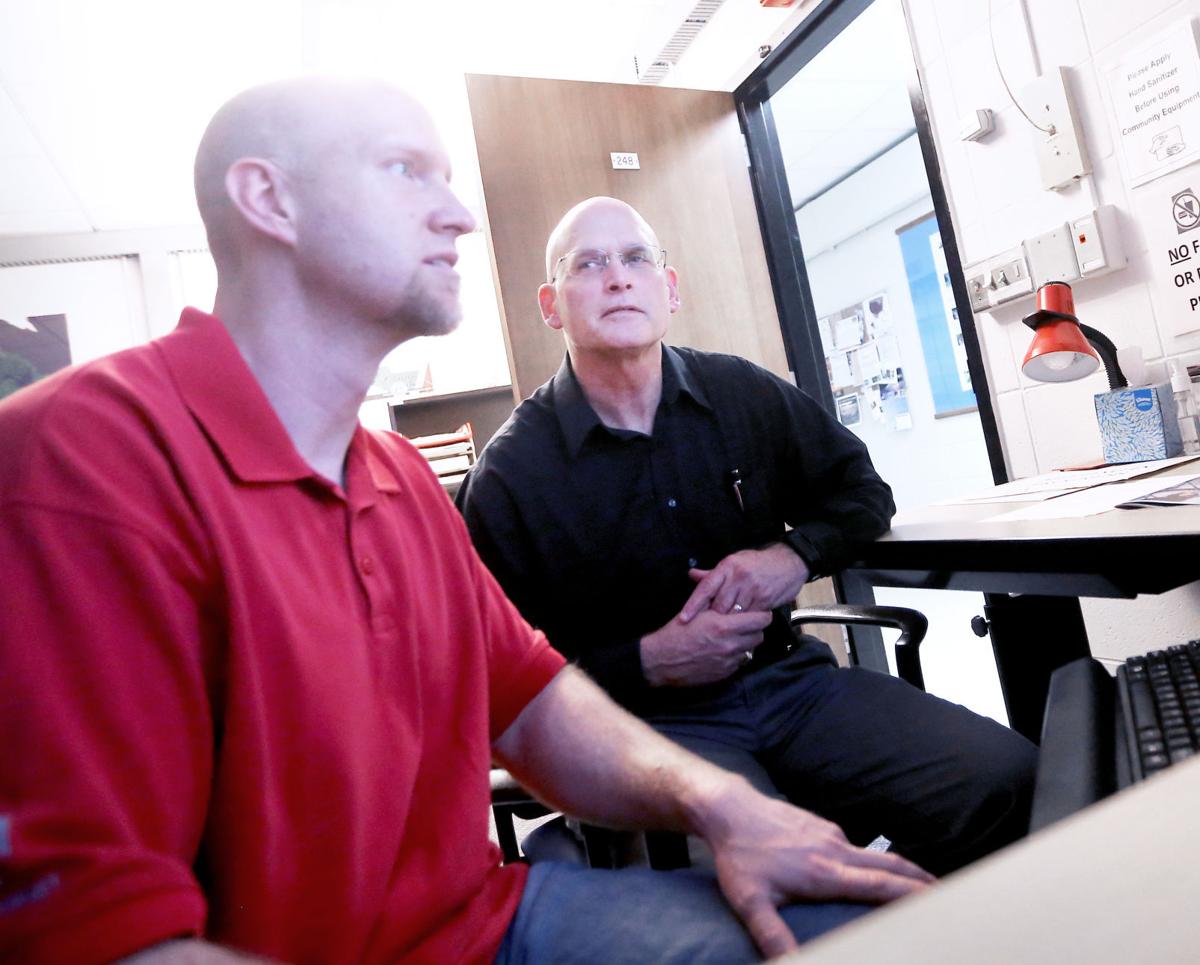 Proposed cuts to a federal agency that operates weather satellites and maintains vast data sets on the environment could hit Wisconsin through reduced funding for more than 150 researchers, including those working to improve weather forecasting and conditions on the Great Lakes.

Proposed cuts to the National Oceanic and Atmospheric Administration also could affect some of the roughly 20 climate change researchers at UW-Madison who receive federal funding, but Wisconsin relies on agency dollars more heavily in the other areas.

NOAA provides $20 million annually for 145 weather researchers at the Cooperative Institute for Meteorological Satellite Studies and an additional 25 at the Sea Grant Institute, which finds ways to improve shipping, fishing and other activities on Lake Michigan and Lake Superior.

The two institutes provide data that are crucial to farmers, air traffic controllers, municipalities, businesses and others, said Steve Ackerman, who directs the meteorological institute in a 15-story building crowned by satellite dishes on West Dayton Street.

“While it’s being labeled as a climate agency, that’s a very small part of what they do,” Ackerman said. “It’s really the weather and ocean agency.”

Seven NOAA scientists work alongside UW-Madison personnel in an arrangement that encourages prompt sharing of data between Madison and Washington. The federal agency’s satellites produce raw data, and researchers here and at other universities use it to deepen understanding of complex weather systems.

“Any time you look at a weather forecast you are looking at NOAA,” Ackerman said. “They collect the data and weather prediction models and make it easy to access.”

President Donald Trump’s budget office has proposed a 17 percent cut to NOAA, which operates the nation’s weather satellites and compiles research on weather, climate, the oceans and the Great Lakes, The Washington Post has reported.

NOAA, which is part of the U.S. Department of Commerce, will have an opportunity to respond to the initial budget plan before a final spending plan is written, the newspaper reported.

In addition to its weather research, NOAA provides funding for study of related longer-term climate patterns. About 20 UW-Madison researchers regularly are engaged in this type of work, Ackerman said.

They receive funding from a variety of federal sources, said Dan Vimont, director of the university’s Center for Climatic Research.

The budget proposal calls for elimination of the 50-year-old Sea Grant program, which operates 33 institutes, including the one at UW-Madison.

The Wisconsin program has conducted research that helped protect shipping harbor pilings from costly corrosion, install wave monitors to warn kayakers of imminent bad weather around the Apostle Islands, and find ways to protect the Great Lakes from too much commercial fishing, said director Jim Hurley.

The Sea Grant Institute aided in the startup of Superior Fresh, a Northfield business that plans to raise salmon and hydroponic greens in a symbiotic indoor environment.

It’s part of an effort to address “the seafood deficit,” said Hurley, who is president of the national association of Sea Grant institutes.

The nation imports 90 percent of its seafood, he said.

In Wisconsin, the institute is also working on a sensor system to warn swimmers about potentially deadly rip currents in Lake Michigan near Port Washington, Hurley said.

Hurley said NOAA also funds the Lake Superior National Estuarine Research Reserve, one of 28 reserves in the country where long-term research on resources provided by coastal areas and how they support human populations. UW-Extension is a partner.

In addition, NOAA also works with the state Department of Administration on Wisconsin Coastal Management Program, addressing problems such as erosion of bluffs by rising water levels, he said.

The Badgers close out the regular season with a a win, and the Madison City Council approves a beer garden at an East Side park. Republican Go…

Pres. Donald Trump has made a lot of promises and policy proposals that could have far-reaching impacts on Wisconsin's economy, environment, c…

Wisconsin's climate may need to adapt to Donald Trump

Trump's calls to dismantle the EPA also raise questions about whether feds will keep pressing Wisconsin on flawed pollution enforcement.

The state sought options for businesses facing the cost of reducing phosphorous that clogs lakes and streams with weeds and algae.

Ron Johnson: 'I can't wait to work with President Trump'

Johnson noted both he and Trump styled themselves as no-nonsense political outsiders rooted in the world of business, not government.

For a stronger economy and national security, don’t cut science

With his proposed cuts in federal research and development spending, President Donald Trump risks harming a priority he puts at the top of his…

Other waterways also are targeted.

UW-Madison researchers Lee Cronce, left, and Steve Ackerman view weather data received from National Oceanic and Atmospheric Administration in the university's Cooperative Institute for Meteorological Satellite Studies in Madison. Nearly 175 scientists and others could be affected by budget cuts proposed for the NOAA, which funds weather, climate and lake research.