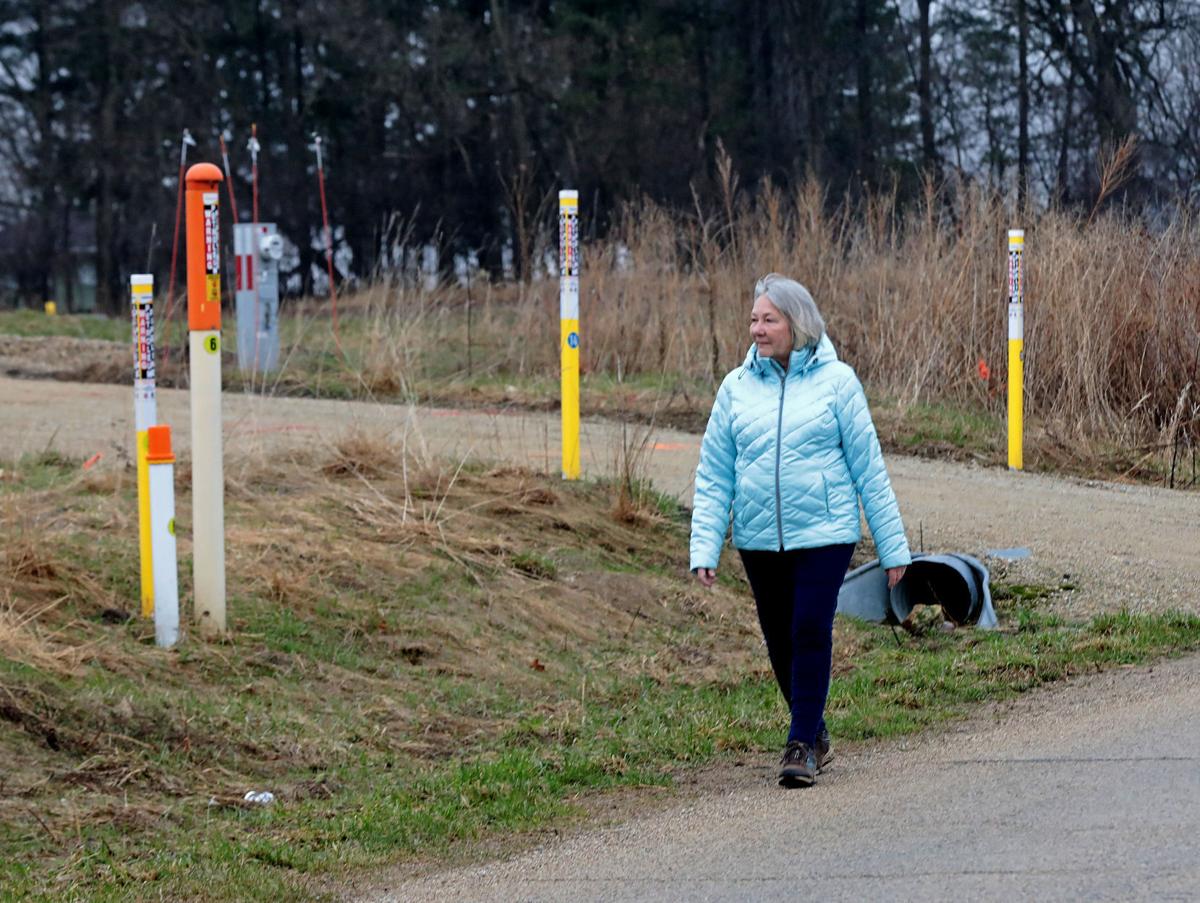 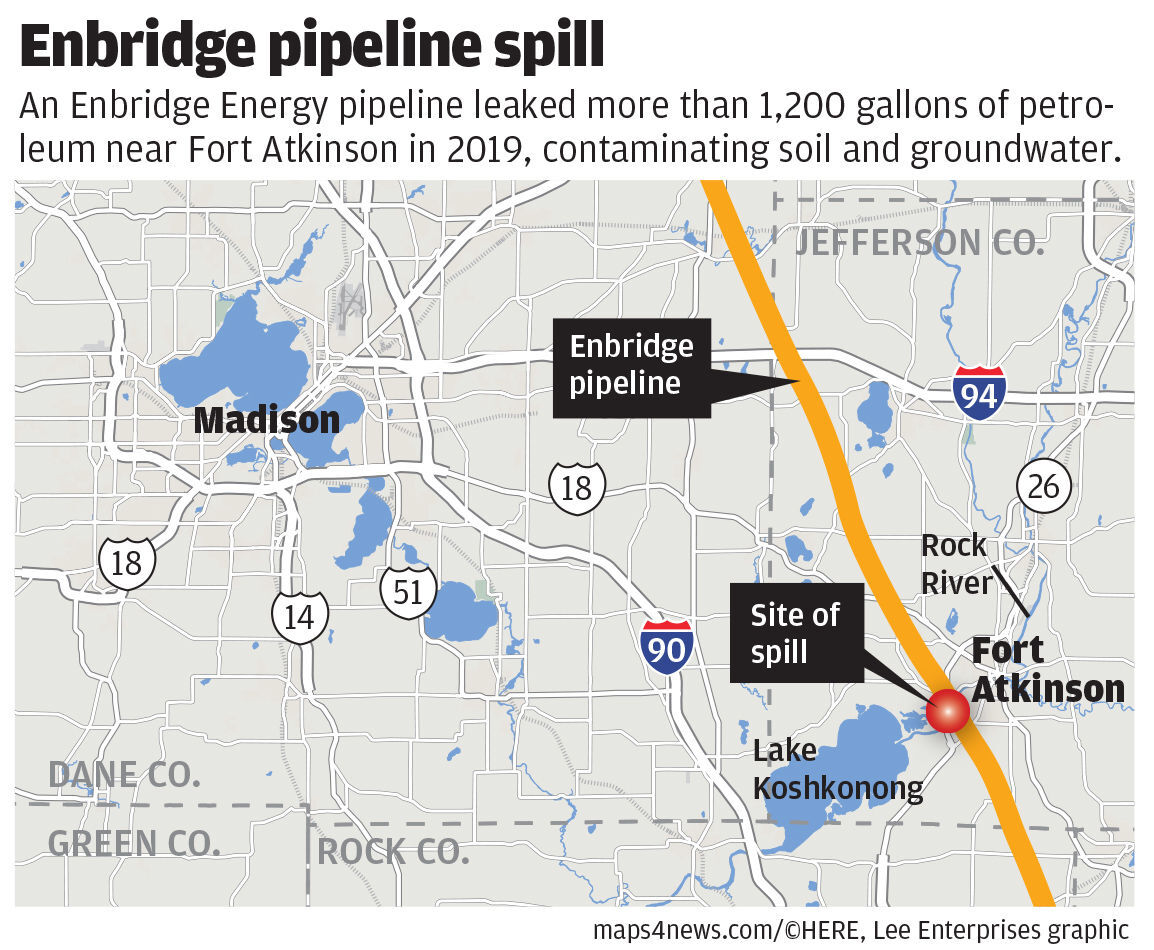 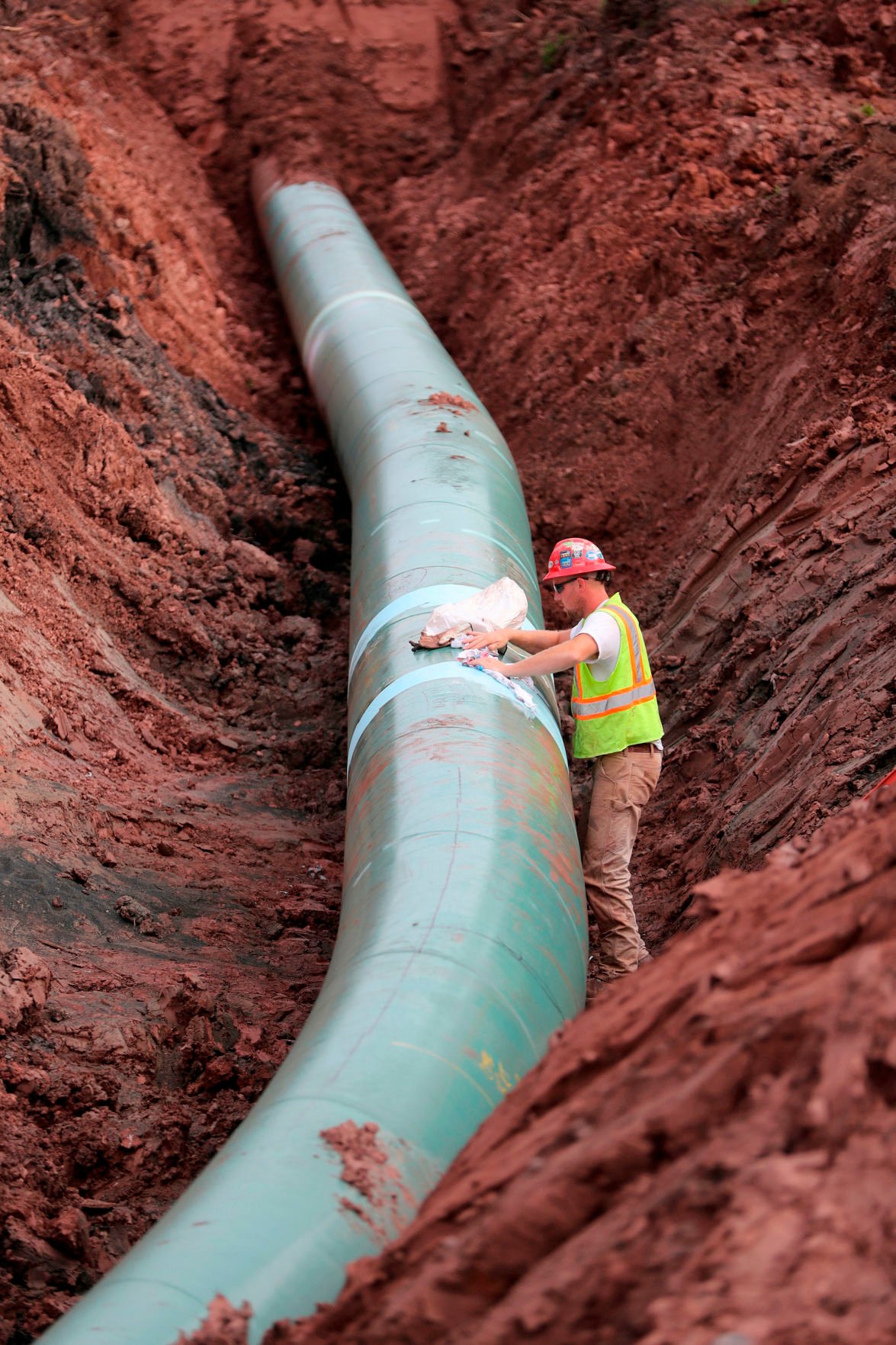 In this 2017, photo, a pipe fitter works on the replacement of Enbridge Energy's Line 3 crude oil pipeline stretch in Superior. Jefferson County residents are questioning the company's response to a 2019 spill near Fort Atkinson.

Jefferson County residents are questioning why Enbridge Energy took 21 days to repair a leaking underground pipeline that spilled more than 1,200 gallons of petroleum near Fort Atkinson, contaminating soil and groundwater, and did not report the spill to regulators for more than 15 months.

The leak, which occurred in 2019 but was not reported until last summer, contaminated at least 130 tons of soil, and toxic chemicals have been detected in groundwater at thousands of times the state limits, according to a report filed earlier this year with the Department of Natural Resources.

The 20-inch pipeline — one of several Enbridge lines that cross Dane County — runs from Manhattan, Illinois, to a terminal near Edmonton, Alberta, and carries “diluent,” a petroleum product used to thin crude oil for transportation.

Environmental consultants for the Canadian pipeline company say the spill affects about 3.5 acres of farmland less than half a mile from the Rock River near Lake Koshkonong.

Anita Martin, a Jefferson County supervisor from Lake Mills, said she first learned of the spill at a committee meeting on Feb. 17 and has been seeking more information from Enbridge and regulatory authorities.

“I don’t know what residents have been informed,” Martin said. “That’s one of my concerns. Hopefully that’s a question they will address publicly.”

Enbridge issued a statement Friday saying it is investigating the “small historic release.”

“The safety of local residents and the environment is our main focus,” said spokeswoman Juli Kellner. “We will work with local landowners and the DNR as our response and any required remediation proceeds.”

According to documents filed with the DNR and the federal Pipeline Hazardous Materials Safety Administration, field workers noticed an odor during a routine site visit on April 26, 2019, but did not see any oil and did not detect gas vapors that day when winds were gusting at up to 38 mph.

On May 4, a consultant dug down about four feet and found evidence of vapors in the soil. Enbridge workers later returned to excavate the pipe, which was about 15 feet below the surface, and found a loose joint on what an Enbridge representative called a “service pipe” for a valve.

Workers made a temporary repair on May 17, three weeks after the leak was first detected. Permanent repairs were made a couple of weeks later.

According to the report filed with the DNR, tests on soils from that May 17 excavation revealed benzene levels that exceeded state standards. Enbridge and its contractors returned in July and October of that year to excavate more soil and collected samples for laboratory testing, which also showed signs of remaining contamination.

The following summer, environmental contractors returned and took samples that revealed benzene at levels above state enforcement limits in soil and groundwater.

It wasn’t until July 31, 2020, more than 15 months after the leak was first detected, that Enbridge reported the leak to the DNR, telling the agency that about 1.35 gallons of material had spilled. The environmental consultants later revised that estimate to 1,225 to 1,386 gallons, of which at least 12.6 gallons ended up in the groundwater.

Trevor Nobile, field operations director for the DNR’s remediation and redevelopment program, said the agency “is evaluating the circumstances based on the current available information.”

Enbridge reported the spill to the federal pipeline safety agency on Aug. 25, 2020, when it said the damage estimate exceeded the reporting threshold of $50,000. The company now estimates the total cost of the spill at $221,258.

The contractors identified 10 private wells within a 1,200-foot radius of the spill, but the report indicates only one has been tested.

“I personally think it would be good if people had their well water tested,” Martin said. “I’m not sure whose responsibility that is.”

Enbridge representatives faced questions at a public meeting Friday from residents upset that they weren’t notified of the spill.

“What are we to do about our wells?” asked Kenneth Pundsack, who lives less than 800 feet from the site. “This is two years after the spill.”

His neighbor Victoria Hachtel said she’s lived near the pipeline for 22 years and always considered Enbridge a good neighbor but was upset that she didn’t learn about the spill until nearly two years after the fact.

“I can’t trust them anymore,” Hachtel said. “I am very disgusted and hurt by the way they treated us.”

Company representatives who attended the meeting of the county’s law enforcement and emergency management committee said residents who want their wells tested can contact the company.

“We’d be more than happy to test their well water for them,” said John Schwartz, a technical supervisor for the company. “In fact we were just talking about that in a meeting earlier this week.”

Ronni Monroe, a Jefferson County resident who used to live within about 500 feet of the pipeline corridor, wonders whether the spill was actually larger and questions Enbridge’s response.

“Fourteen hundred gallons isn’t a huge spill, but the behavior is reprehensible,” Monroe said. “I just think it should have been public knowledge. I don’t care if it’s four gallons.”

Reports of the leak come as Enbridge faces fights over pipeline expansion projects in Minnesota, northern Wisconsin and Michigan.

In 2017, Dane County sought to force the company to carry additional spill insurance in order to expand its Line 61, which runs along the same corridor as Line 13, but the state Supreme Court struck down the requirement.

“I personally think it would be good if people had their well water tested. I’m not sure whose responsibility that is.”

The bill, passed by the Senate Tuesday, would direct $900,000 a year from ratepayers of Wisconsin’s investor-owned utilities to the Customer Utility Board, an independent nonprofit organization established by the Legislature to represent utility customers.

The Madison-based nonprofit cites concerns about the age and structural integrity of the reactors, which began operation in 1970 and 1972, the public health risks of an accident and the heated water the plant dumps into Lake Michigan.

Alliant Energy's six projects would add 414 megawatts — enough to power about 100,000 typical homes for a year — to the company's grid.

More than 320 wildfires have scorched some 1,400 acres so far this year, and the Department of Natural Resources expects the spring fire season will last longer than usual as a result of early snow melt. 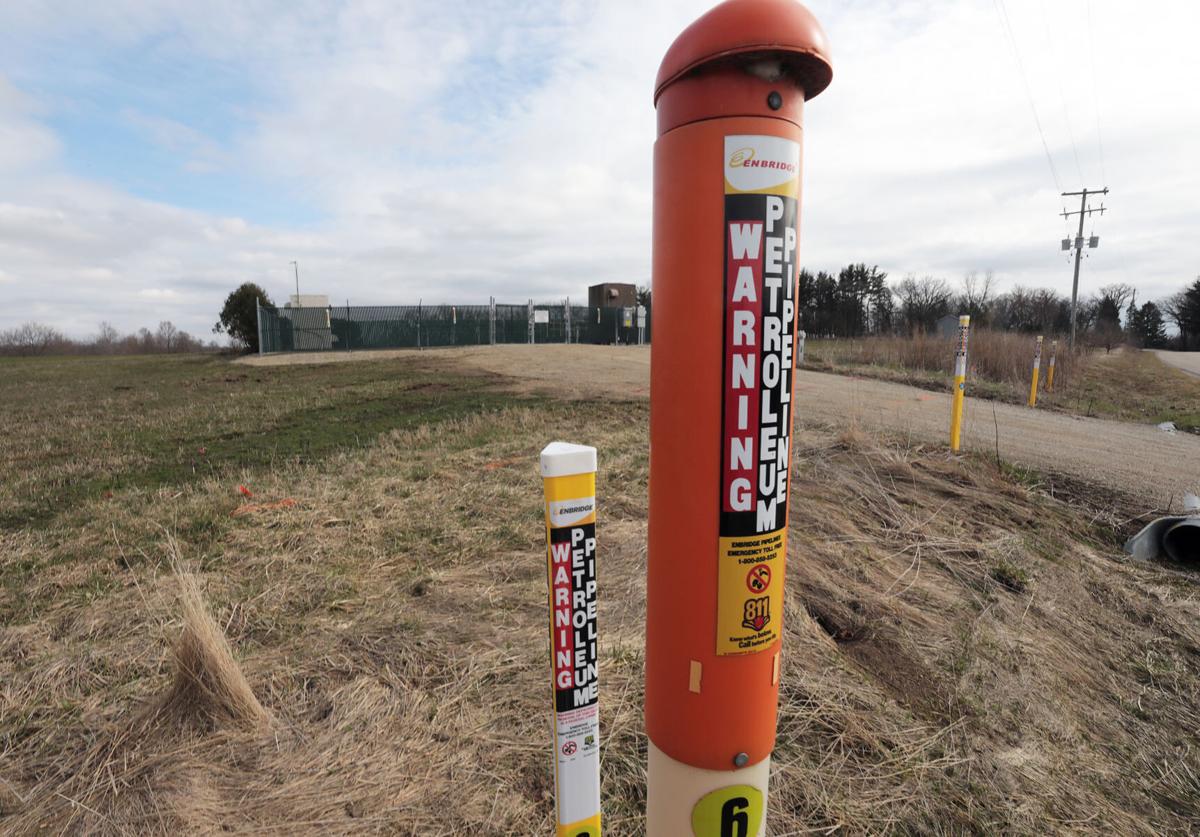 Some 1,200 gallons of petroleum escaped in an underground leak at the Enbridge Energy pipeline facility in Fort Atkinson. 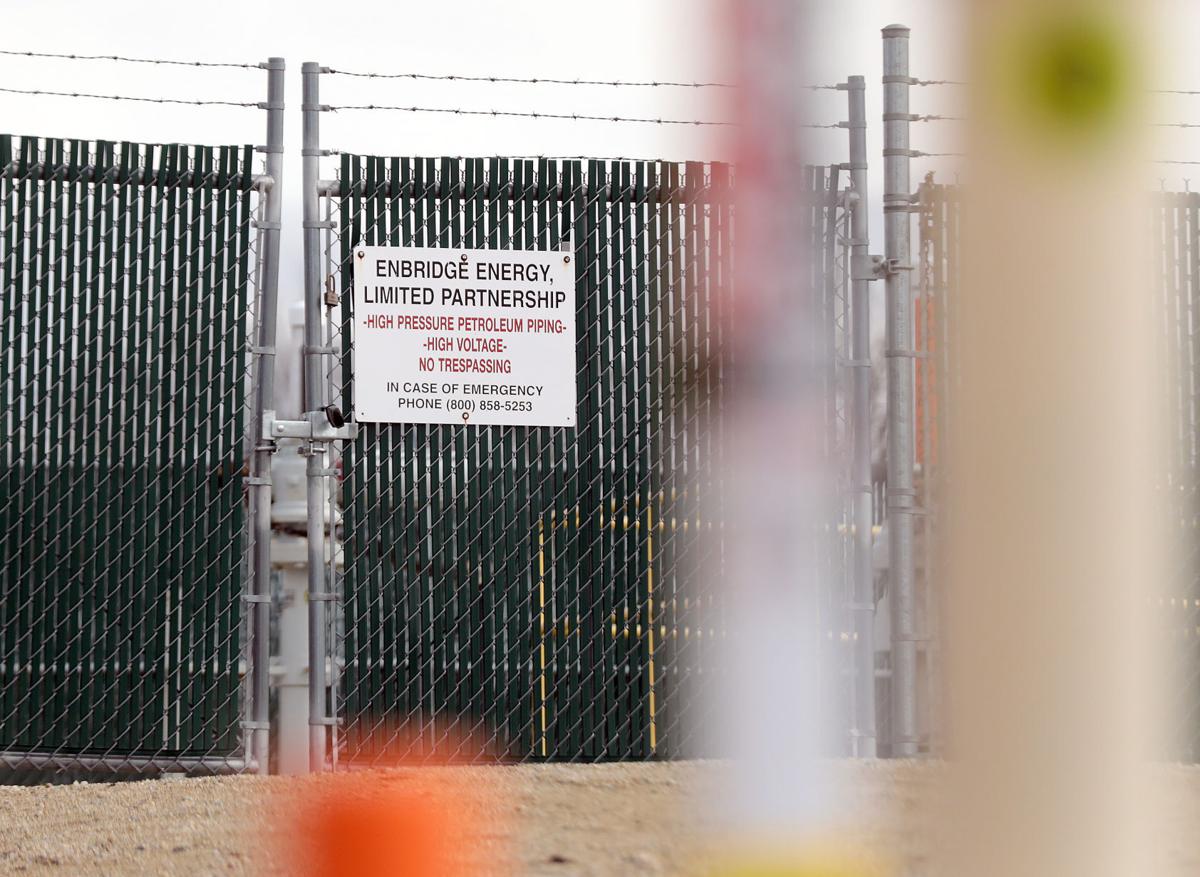 The Enbridge Energy pipeline facility in Fort Atkinson that was the site of an underground leak in 2019. Some 1,200 gallons of petroleum spilled at the site.

In this 2017, photo, a pipe fitter works on the replacement of Enbridge Energy's Line 3 crude oil pipeline stretch in Superior. Jefferson County residents are questioning the company's response to a 2019 spill near Fort Atkinson.