Ed Blume expected some noise when he bought his home in 2007.

The condominium, at the end of a cul-de-sac in the Carpenter-Ridgeway neighborhood, sits just 5,000 feet south of the Dane County Regional Airport’s main runway.

“If I were still a strong young man I could probably hit them with a baseball when they fly over my house,” Blume said of the planes.

What Blume, 72, didn’t know was that his rights to do anything about the noise had been signed away years before he bought the place.

Blume recently discovered that he is among hundreds of Madison property owners whose land is subject to “avigation easements” — legal agreements waiving their rights to sue the airport for noise or air pollution or any other damages resulting from overhead flights, regardless of any changes in the number or type of aircraft.

As the Pentagon nears a decision on whether to base a squadron of F-35 fighter jets at Truax Air Field, Blume worries that the easements will also shut him and his neighbors out of federal programs to protect homes from the expected increase in aircraft noise.

The Air Force plans to replace the F-16 jets flown by the Wisconsin Air National Guard’s 115th Fighter Wing with its newest combat aircraft beginning in 2023, a move proponents say would result in dozens of new jobs and $120 million in new construction to prepare the base.

The new mission would also result in more flights and noise, according to a preliminary environmental study released in August.

There’s disagreement over how much louder the F-35 jets would be, but the Air Force has said the new mission would subject more than 1,000 additional households to average daily noise in excess of 65 decibels, a level considered “incompatible for residential use.”

Peak noise levels at some residences, schools and churches would exceed 100 decibels — the equivalent of a rock concert.

The Air Force is expected to release a final environmental impact statement later this month and issue a final decision 30 days after that.

There are Federal Aviation Administration programs that fund noise reduction for homes within a 65-decibel zone, but it’s unclear if properties covered by avigation easements would be eligible.

Airport Director Kim Jones said the county does not have a list of all the easements held, though she said hundreds were acquired with FAA funds prior to a runway expansion in the 1990s. Easements are indefinite agreements that are attached to the property even if it is later sold.

Darcy Haber, owner of Solidarity Realty, has identified 443 easements, including at least 105 within the Air Force’s projected 65-decibel zone.

Jones said the easements, which were acquired for $2,000 apiece, would render those properties ineligible for any additional federal compensation.

“There was no obligation,” she said in a recording of a Nov. 6 meeting with Madison City Council members. “These people signed this agreement knowingly.”

FAA regional spokesman Tony Molinaro said it might be possible for those properties to qualify for mitigation funds.

“The FAA will look into it,” he said.

To get mitigation funding, the county would have to conduct a noise study, which Jones said would cost at least $1 million and likely not occur until the transition from F-16s to F-35s is complete, a date the Air Force has not specified. It could take another three to four years for funding to become available.

The money would come from the state Department of Transportation, which administers funding for FAA programs, and there is no guarantee anyone would get funding, regardless of an easement.

Ald. Rebecca Kemble, who represents District 18 near the airport and opposes the F-35 mission, said it could be decades before some homeowners get help, and many will be on their own.

“Mitigation is really a myth,” Kemble said. “The people most impacted aren’t even eligible.”

Kemble said she first learned about avigation easements during a November trip to Burlington, Vermont, home to one of the first National Guard units to get F-35s.

While the county has not provided a list, Jones said the easements are public documents.

Accessing them is another matter. It requires a trip to the register of deeds, where they are cataloged only by the property’s legal description — not the address or parcel number.

Haber said many residents who purchased homes since the 1990s are unaware of the restrictions, which she has yet to see listed on a deed.

In Blume’s case, the easement was signed 20 years ago by the condominium’s developer.

After reading about the easements several weeks ago, Blume, a former legislative aide, went to the register of deeds and asked for a copy of his title.

Haber, whose research previously identified at least $255 million worth of residential property within the Air Force’s projected 65-decibel noise area, and her staff spent dozens of hours searching subdivision by subdivision to compile a list of properties — including Blume’s.

“Needless to say, I was upset when I found out,” he said.

Last week, Solidarity Realty sent letters to the owners of all the properties with easements and plans to be at the county register of deeds office from 11 a.m. to 1 p.m. Friday to help people search their property records.

Haber said sellers are obligated to disclose easements, but only if they are aware of them. While title companies do catch them, she said they are often listed in fine print on legal documents most buyers don’t see until closing.

One title insurance policy Haber uncovered mentions a joint driveway easement with the property description on the first page, but the avigation easement is the last of 16 items appearing on page 5.

“There should be a specific question — do you have an avigation easement? — so we now have full disclosure for everybody,” Haber said.

Despite the proximity to the airport, Blume said he loves his neighborhood, which is just blocks off busy East Washington Avenue and backs up to public woodland around Starkweather Creek.

“It’s like the Arboretum, without the cost,” Blume said.

Blume said he’s not bothered by the dozens of commercial jets that pass overhead each day, but the F-16s are loud enough to interrupt conversations when they take off.

The Air Force has not provided a list of homes within the new estimated noise contours, so Blume enlarged the thumbnail maps included in the draft environmental study and traced them onto a larger city map with street names.

He expects the peak noise level with F-35s will be over 100 decibels.

“It’s like a rock concert in my backyard,” he said.

Blume, who is retired, said he can’t afford to live anywhere else in Madison and worries that he wouldn’t be able to sell his home. His hope is that he can at least persuade the county to remove the easement.

“We need an attorney, but I don’t have any money for an attorney,” Blume said. “I don’t know what I’m going to do. I have no idea.”

Big snowstorm poised to hammer Wisconsin Sunday. See how much may fall and where

Central Wisconsin looks to get hit the hardest, but the track of the storm could shift the zone of heaviest snow, according to forecasters.

The right to build on others' land: Realtor-backed bill undoes Supreme Court ruling on docks

Supporters say it corrects a bad Supreme Court ruling and restores rights in place for more than a century, but opponents say it unconstitutionally strips lakebed owners of their rights with no compensation.

The interim leader of the Wisconsin National Guard expects operations to return to current levels by 2026, according to a letter to Madison Mayor Satya Rhodes-Conway.

Supervisor Heidi Wegleitner and four co-sponsors hope to garner additional support from the board, whose members have been split on the issue.

The U.S. Air Force announced the final selection of the Wisconsin Air National Guard’s 115th Fighter Wing, capping more than three years of study and deep community division over the planes, which come with the promise of jobs and new construction but also noise and pollution. 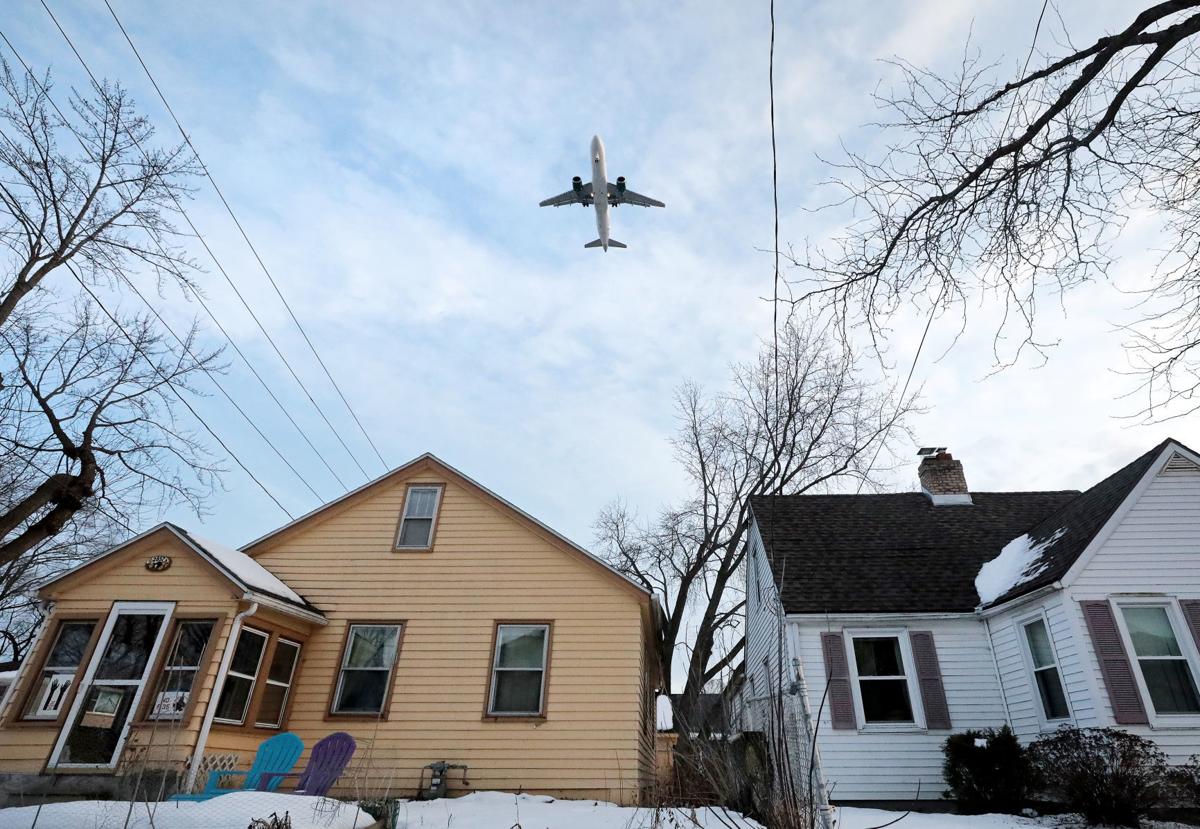 A jetliner flies over homes in the 2800 block of Commercial Avenue as it approaches the Dane County Regional Airport. A study by Solidarity Realty has found hundreds of homes on Madison's East Side are covered by easements that could limit the owners' rights to receive federal noise mitigation funding if the Air Force bases a squadron of F-35s at Truax Field. 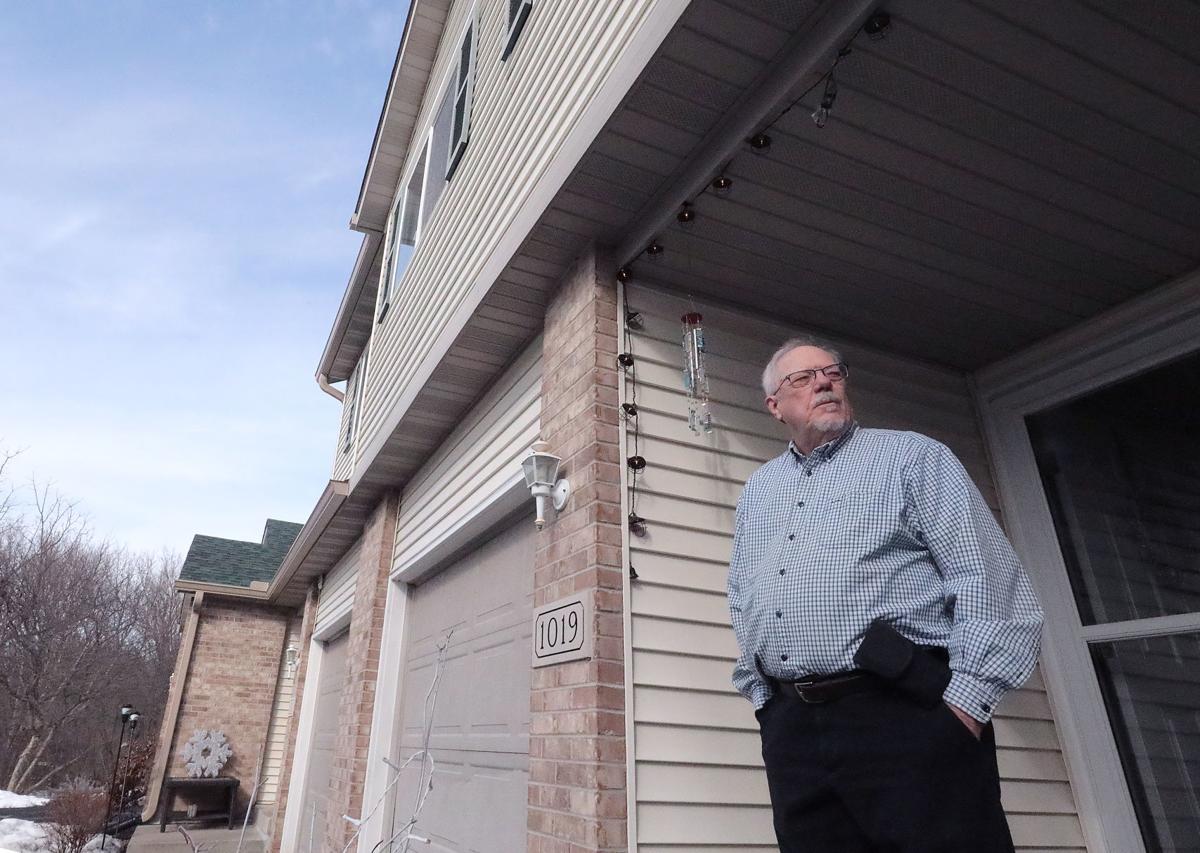 Ed Blume purchased his Melvin Court condo in 2007. He only learned recently that his property is covered by an easement that limits his rights to sue over noise complaints about the airport and could keep him from receiving federal noise mitigation funding. 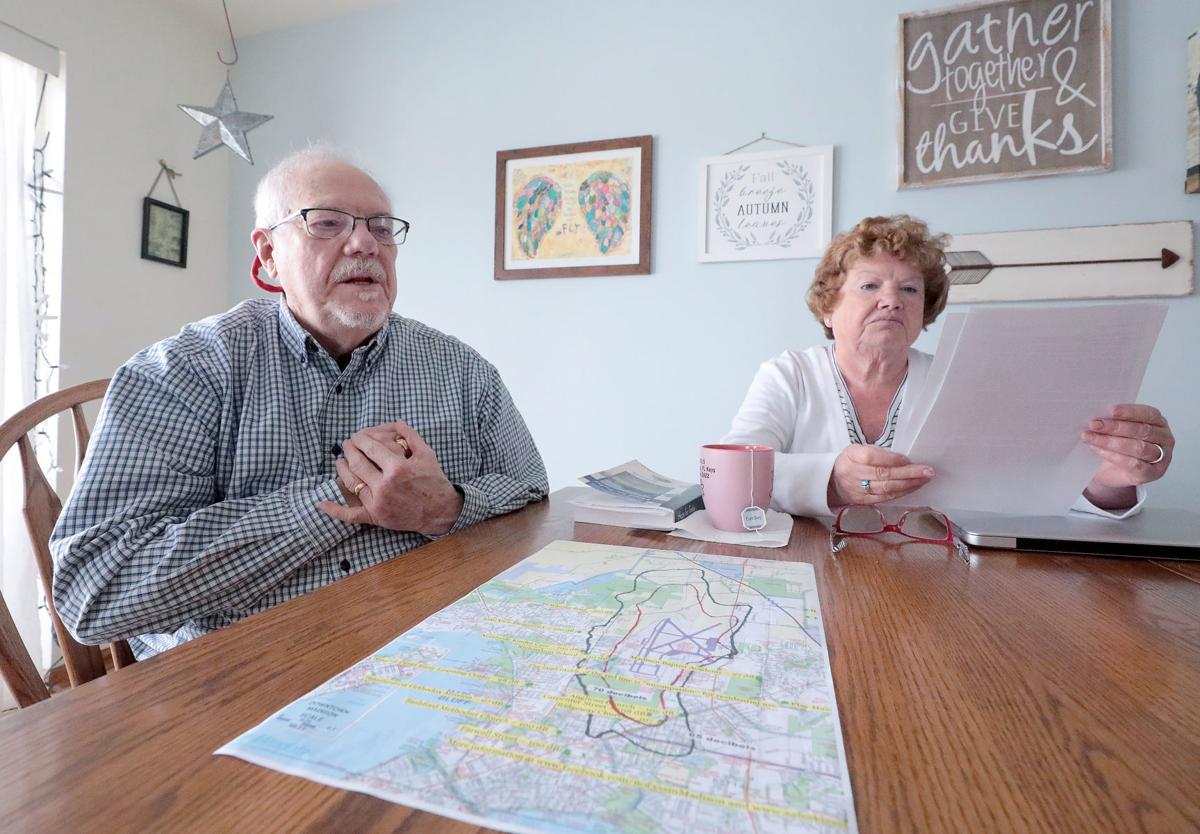 Ed Blume and his neighbor, Wendy Maginnis, study a map of potential noise impacts of stationing F-35 jets at Madison's Truax Field. Like Blume, Maginnis recently learned that her condominium on Melvin Court is subject to an avigation easement. 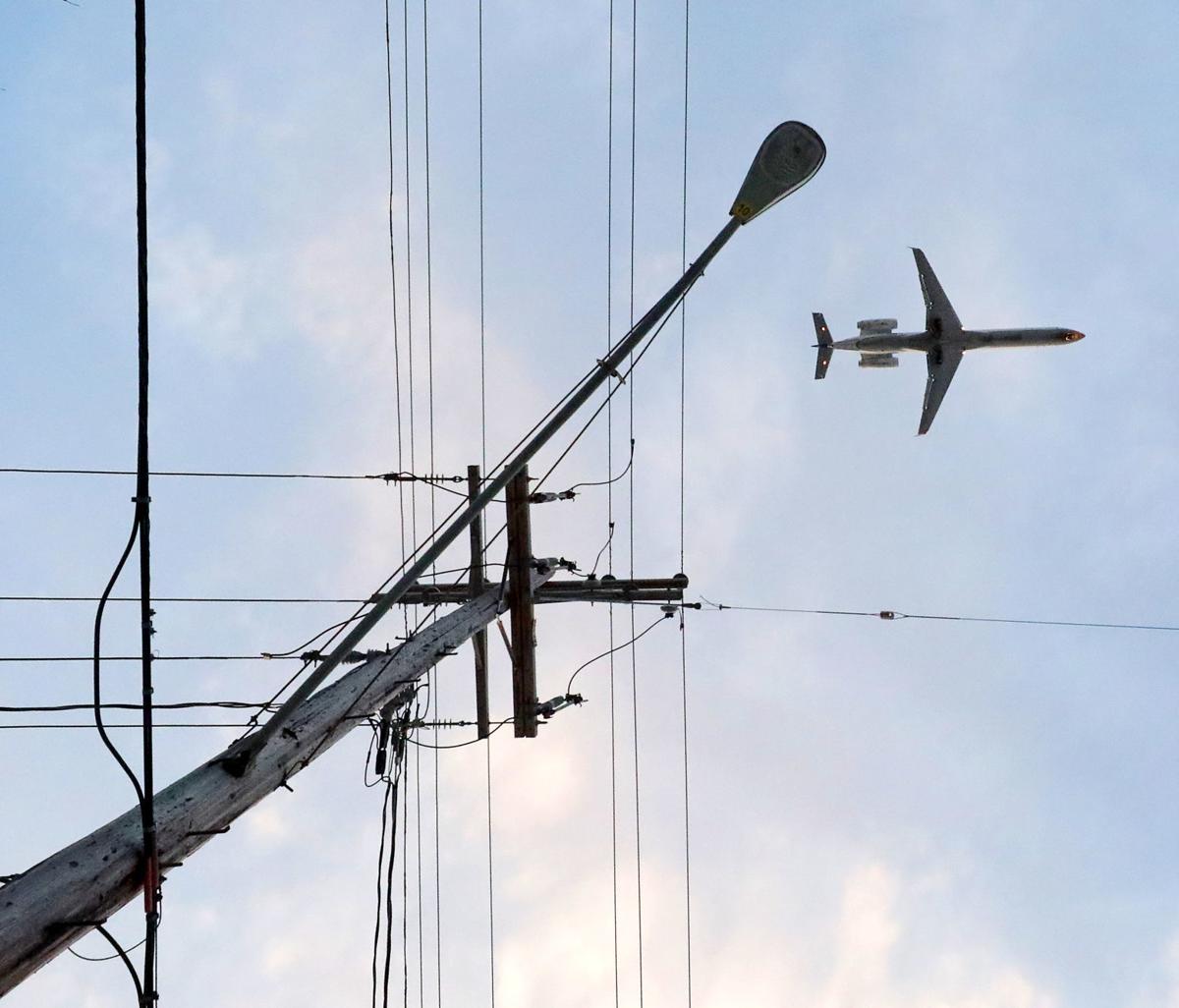 A study by Solidarity Realty has found hundreds of homes on Madison's East Side are covered by easements that could limit the owners' rights to receive federal noise mitigation funding if the Air Force bases a squadron of F-35s at Truax Field. 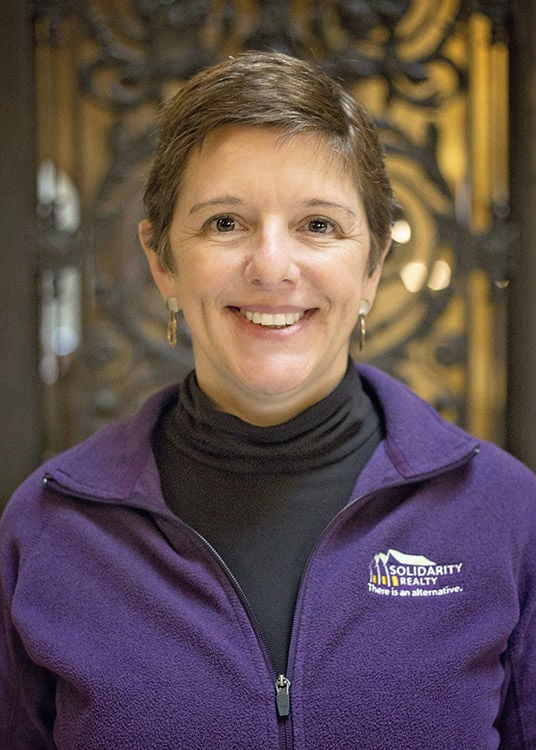