In a 4-1 decision — with two liberal justices, Rebecca Dallet and Shirley Abrahamson, abstaining — the court reversed an appeals court decision, striking insurance clauses the county included in a permit allowing Enbridge Energy to triple the volume of crude oil moving through a Wisconsin pipeline.

The conservative majority — Chief Justice Patience Roggensack and Justices Annette Ziegler, Rebecca Bradley and Daniel Kelly — ruled the 2015 permit must stand without insurance requirements the Legislature barred during the permitting process, rejecting arguments from the county and a group of landowners who said the county should have a chance to reconsider the permit application. 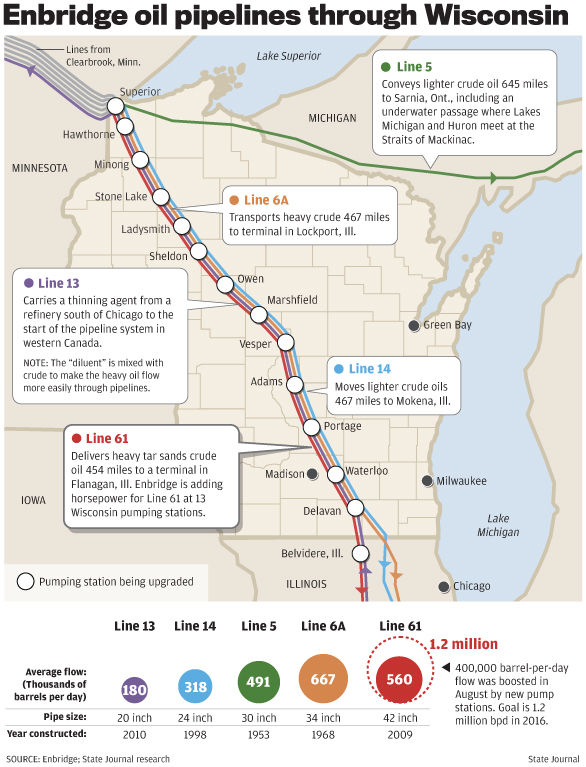 In 2017, Enbridge completed a $1.5 billion upgrade to its Line 61, which cuts across Wisconsin from Superior to the Illinois border, including a 12-mile stretch in northeastern Dane County.

As part of the project, the company needed a conditional-use permit to build a pumping station, which Dane County granted on the condition that Enbridge carry extra spill insurance.

But state lawmakers intervened on behalf of the company, passing a law that banned counties from requiring special insurance if an interstate pipeline operator carries comprehensive general liability insurance that includes coverage for “sudden and accidental pollution liability.”

The county ultimately kept the insurance conditions, but added language signaling that the law made them unenforceable.

The case has been tied up in the courts ever since, with Enbridge seeking to strike the insurance requirement, the county fighting for local powers and a group of pipeline neighbors seeking an injunction to enforce the permit conditions who assert the company has never provided proof it is insured for sudden and accidental pollution liability.

“The Zoning Committee had authority to attach conditions to the (permit) to ensure compliance with Dane County’s zoning ordinances and standards,” Justice Rebecca Bradley wrote in the majority opinion, “but not conditions violative of Wisconsin law.”

The county has an obligation to ensure its standards are met and the authority to include conditions, the court wrote, but neither preclude a judge from striking unlawful conditions.

The court also rejected the landowners’ argument that Enbridge failed to show it carried insurance as well as their assertion that Enbridge must “maintain” insurance in perpetuity — saying the law simply required that they had the insurance when the permit was granted.

“We decline to add words to the statute, as the Landowner’s argument would necessitate,” the court stated.

“Enbridge did not demonstrate that it ‘carries’ insurance that includes ‘sudden and accidental’ coverage,” she wrote. “The condition precedent to trigger the preemptive provisions of (the statutes) are therefore not fulfilled.”

The 42-inch pipe went into operation in 2009 and is one of three Enbridge lines carrying Canadian tar sands oil from Superior to a terminal in Illinois.

In 2014, Enbridge sought a conditional-use permit for a new pumping station in the town of Medina as part of the project to triple capacity to 1.2 million barrels per day.

The county’s Zoning and Land Regulations committee granted the permit but said Enbridge must carry a $25 million environmental liability policy to cover cleanup in the event of a spill like the one in 2010 that caused $1.2 billion in damage when an Enbridge pipeline ruptured in Kalamazoo, Michigan.

The county ultimately kept the insurance language, which Enbridge challenged in court. Meanwhile, a group of neighboring landowners filed their own case asking the court to enforce the insurance condition.

While the expansion work is completed, upstream permitting delays have so far limited the flow to about 990,000 barrels per day.

Earlier this month a Minnesota appeals court reversed a decision by state regulators who last year had approved an environmental review for Enbridge’s proposed replacement of its aging Line 3, which links up to Line 61 in Superior. Enbridge had earlier announced a year-long delay of that multibillion-dollar project because of permitting issues.

Enbridge spokeswoman Jennifer Smith said the company was pleased with the decision.

“The Waterloo pump station is critical infrastructure for the state of Wisconsin and for the region, helping to ensure a reliable source of energy for decades to come,” Smith said.

David Gault, assistant corporation counsel for Dane County, said the case stems from “a really badly written law” that was anonymously slipped into the budget specifically to benefit Enbridge. He questioned the court’s interpretation that the law doesn’t require a pipeline operator to maintain insurance.

Noting that Enbridge’s attorney said the company is willing to provide proof of insurance, Gault suggested that the zoning committee request it once a year.

“Businesses need to be able to operate in Wisconsin with the understanding that local governments will follow the law and operate within their authority,” said Scott Manley, WMC’s vice president of government relations. “In this case, Dane County blatantly ignored state law in an attempt to stop a commercial project it disagreed with.”

Patricia Hammel, who represented the landowners, said the conservative justices who control the court are beholden to the state’s business lobby.

“Today the Wisconsin Supreme Court again ignored established precedent and the plain meaning of words to reach a 4-1 result favoring a multinational oil corporation,” Hammel said. “This is an activist court and the majority will do as Wisconsin Manufacturers & Commerce directs.”

The three-member Mackinac Straits Corridor Authority unanimously backed an agreement between the state and Canadian pipeline company Enbridge to drill a tunnel through bedrock up to 100 feet below the more than 4-mile-wide channel that links lakes Huron and Michigan.

The funding, from the department's Economic Development Administration, will be used to engineer, design and construct infrastructure in the expanded portion of the industrial park.

Enbridge Energy says it hopes to negotiate for the land it needs in Ashland and Iron counties and if successful will withdraw its application for eminent domain powers. 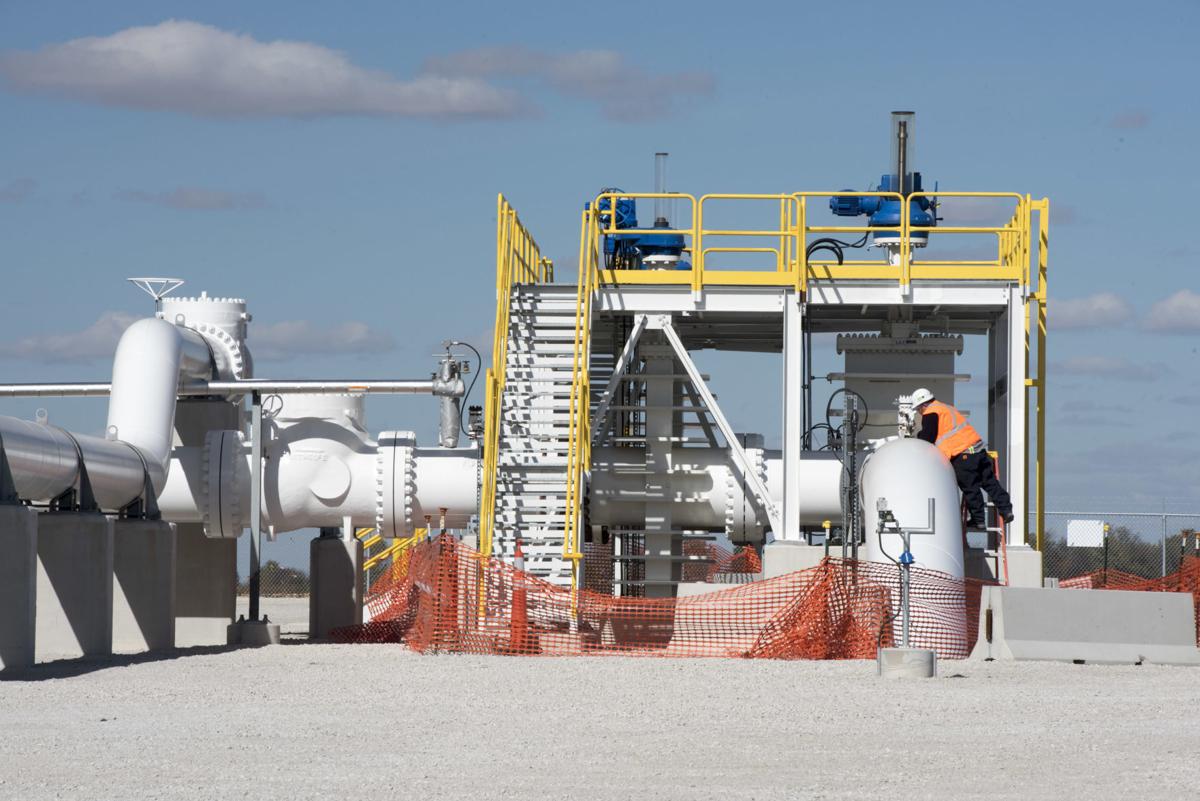 The Wisconsin Supreme Court ruled Thursday that Dane County cannot require special insurance coverage as a condition for a 2015 permit allowing Enbridge to triple capacity of the pipeline, which transports Canadian tar sand oil to refineries in Illinois. 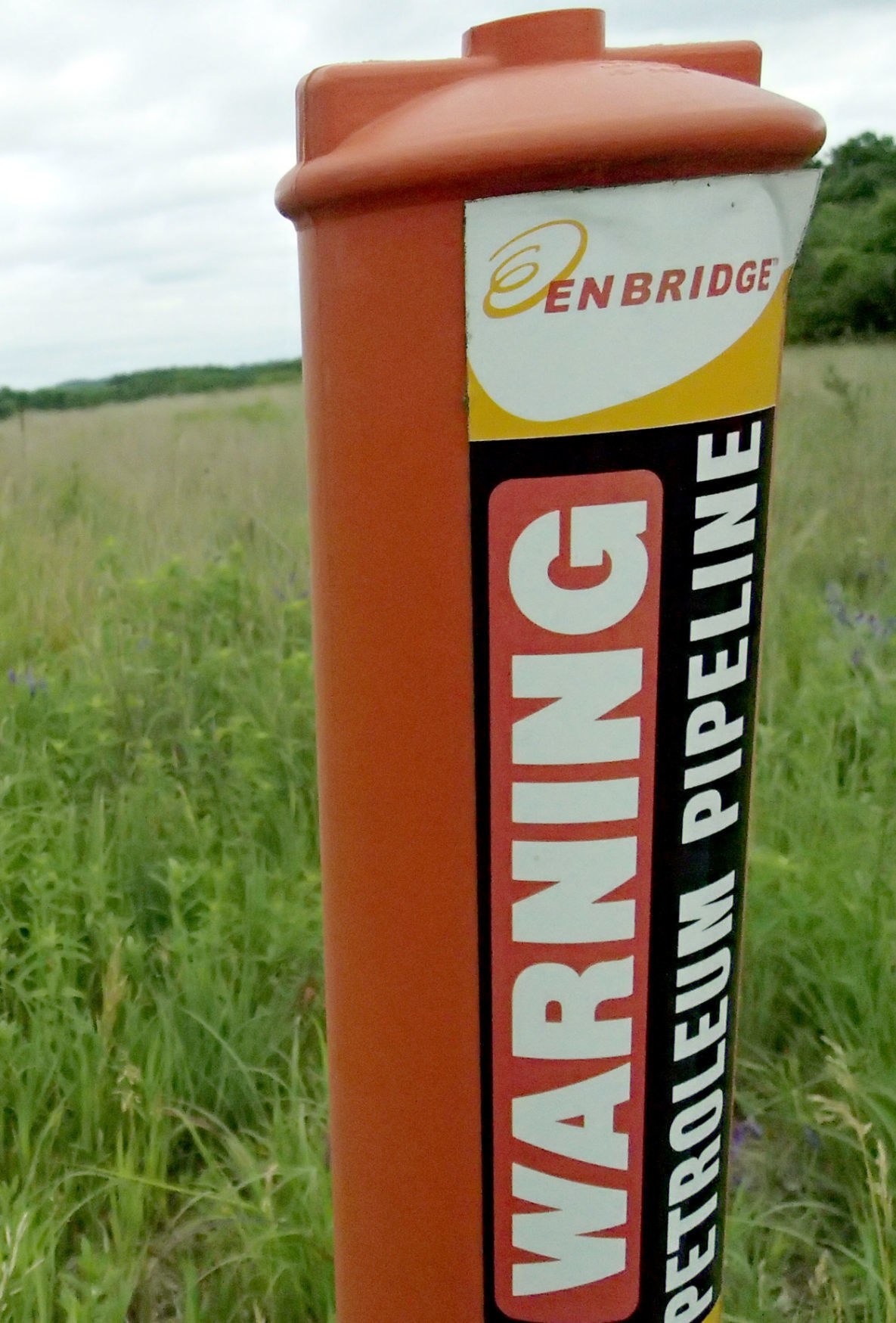 A marker indicates the location of Enbridge's Line 61 pipeline corridor outside Wyocena, east of Highway 22.