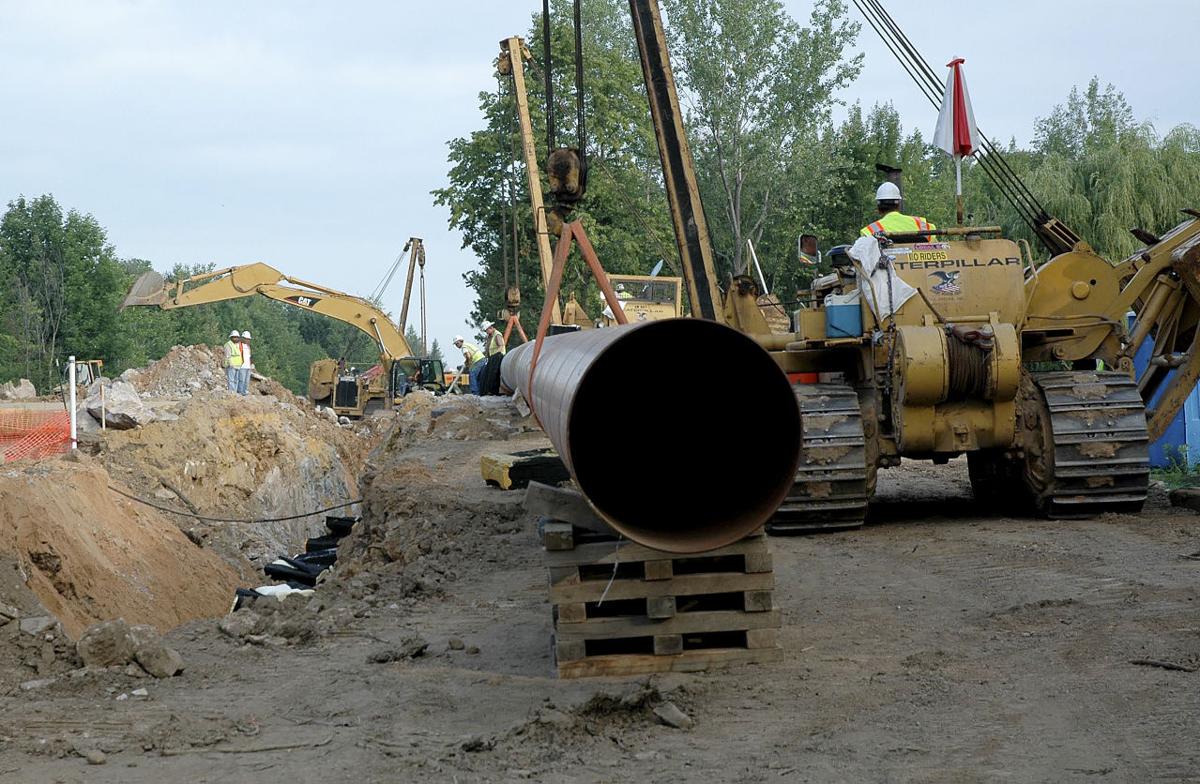 Mark Borchardt took this photo of crews laying a crude oil pipeline that went into operation in 2009 near his home in Clark County. 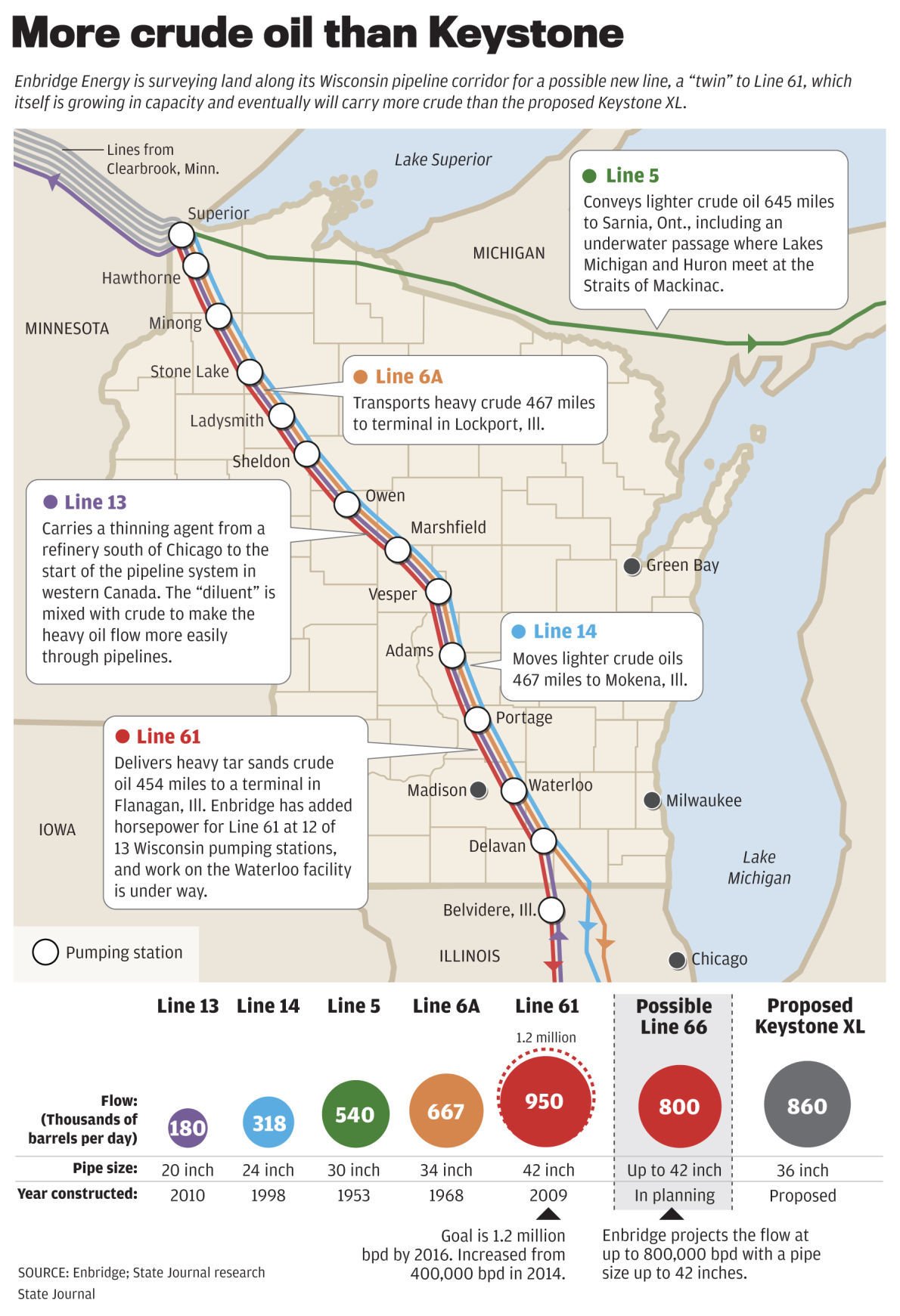 Crews hired by Enbridge Inc. are surveying a 300-mile corridor running the length of Wisconsin for a possible new tar sands pipeline that would be the twin to an underground line whose capacity has quietly eclipsed the projected flow of the Keystone XL project.

Activists and landowners say they are worried that digging for a new pipeline would disrupt lives, lead to a repeat of environmental violations committed when the last line was laid, and increase the chances of a devastating spill of heavy crude.

A spokeswoman for the Canadian pipeline giant last week said the company has improved its safety practices and said there was no timetable for building a line.

But in statements to investors, company executives tout a new 42-inch-diameter pipeline from Superior to the Illinois border as the answer to a bottleneck in tar sands crude from western Canada that could occur by late 2017 if other pipeline projects are completed.

“We would need to twin (the) Southern Access pipeline to make that happen at that 450,000 barrels per day level,” Enbridge president Guy Jarvis told investors and analysts last month.

Southern Access is one of five underground pipelines that run under an 80-foot-wide right of way that follows a diagonal across the state.

By adding pumping horsepower along the line, Enbridge increased its capacity to 950,000 barrels per day by October, up from 400,000 barrels when it went into operation in 2009, the company disclosed last week in its third-quarter earnings report.

The sharp increase has drawn far less public attention than TransCanada Corp.’s controversial Keystone XL proposal for a 36-inch-diameter pipe across the Great Plains that would carry 860,000 barrels per day.

Last week, President Barack Obama rejected that company’s request to build the Keystone pipeline. The company said Friday it is committed to the project.

Calgary-based Enbridge has drawn less attention because it is expanding in an existing pipeline route and an established crossing point from Canada, although the National Wildlife Federation and other groups are suing to force a federal review of increased flows at the border crossing.

“I think people in Wisconsin should be extremely concerned,” said Jim Murphy, senior counsel for the National Wildlife Federation. “You’ve got potentially twice as much tar sands flowing down.”

A stubborn and costly 2010 spill of Enbridge tar sands in Michigan demonstrated how much harder the material is to clean up because it can sink in water, Murphy said. Tar sands release more carbon than other crude oils when they are extracted and burned, and they are extracted from open pits that disrupt wildlife and taint water, he said.

Six county commissions have called on the state Department of Natural Resources to give closer scrutiny to the pipelines.

Construction of the Southern Access line resulted in $1.1 million in fines for Enbridge after the DNR cited about 100 violations of laws protecting streams and wetlands.

Elizabeth Ward of the Wisconsin chapter of the Sierra Club said residents around the pipeline corridor are concerned because survey crews have shared maps indicating that homes, barns and other structures may need to be demolished for a new line. Some are worried about spills, Ward said.

Mark Borchardt said that in the summer of 2014, an Enbridge survey team of more than a dozen got his permission to work on his 10 acres outside of Marshfield.

“The survey they did was so large it was disturbing,” said Borchardt. He said existing Enbridge lines run under his driveway, but he couldn’t get answers about the width of the easement the company wants for a new line, so he began talking to neighbors and found they were just as confused.

“The attitudes are wide ranging, from the company is evil to anger to not even having heard of the expansion,” Borchardt said of his neighbors.

Every year crews are digging to make sure the lines are solid, Borchardt said. The underground release in 2010 of an estimated 40 gallons of crude oil near the intersection of Robin and Kimberly streets, about a mile from Borchardt’s house, resulted in contamination of the east fork of the Yellow River and Enbridge’s purchase of a residential property abutting the pipeline.

Five years later, in August, the state DNR approved removal of monitoring wells if Enbridge disposed of a pile of soil and purged water and waste on the site.

Some neighbors don’t want to speak up because they are afraid of angering the company and losing money if the company buys their property, Borchardt said.

“When they hear that Enbridge changed the eminent domain law, they don’t even believe it,” Borchardt said. “That’s when the swearing starts.”

At the company’s urging, Republicans who control state government inserted a provision into the state budget that makes more clear Enbridge’s ability to condemn property if it can’t agree with property owners on a price.

Enbridge spokeswoman Jennifer Smith said it was too early to say how much land might be needed if the company decides to install a new tar sands line.

“At this point the conversations with landowners along the route have been about the surveying corridor,” Smith said in an email response to questions.

The Southern Access pipeline — Line 61 — has been the subject of controversy in Dane County.

State lawmakers wiped out a Dane County zoning board requirement that Enbridge buy extra spill cleanup insurance before it added pumps where the line passes through the town of Medina. After the pumps are installed in about a year, the line will carry 1.2 million barrels per day.

With GOP in power, Bill Davis plans for long game of extending hand to rural residents.

But the company hopes not to build its Sandpiper line, which includes the 14-mile section near Superior that DNR approved.

Dane County officials acknowledged with a note that the state invalidated its pollution cleanup requirement..

The largest importer of tar sands crude oil from western Canada plans to triple capacity of one of its pipelines through Wisconsin.

Enbridge says its existing policy and state-federal guarantees should be enough despite lingering worries about massive 2010 spill.

Mark Borchardt took this photo of crews laying a crude oil pipeline that went into operation in 2009 near his home in Clark County.