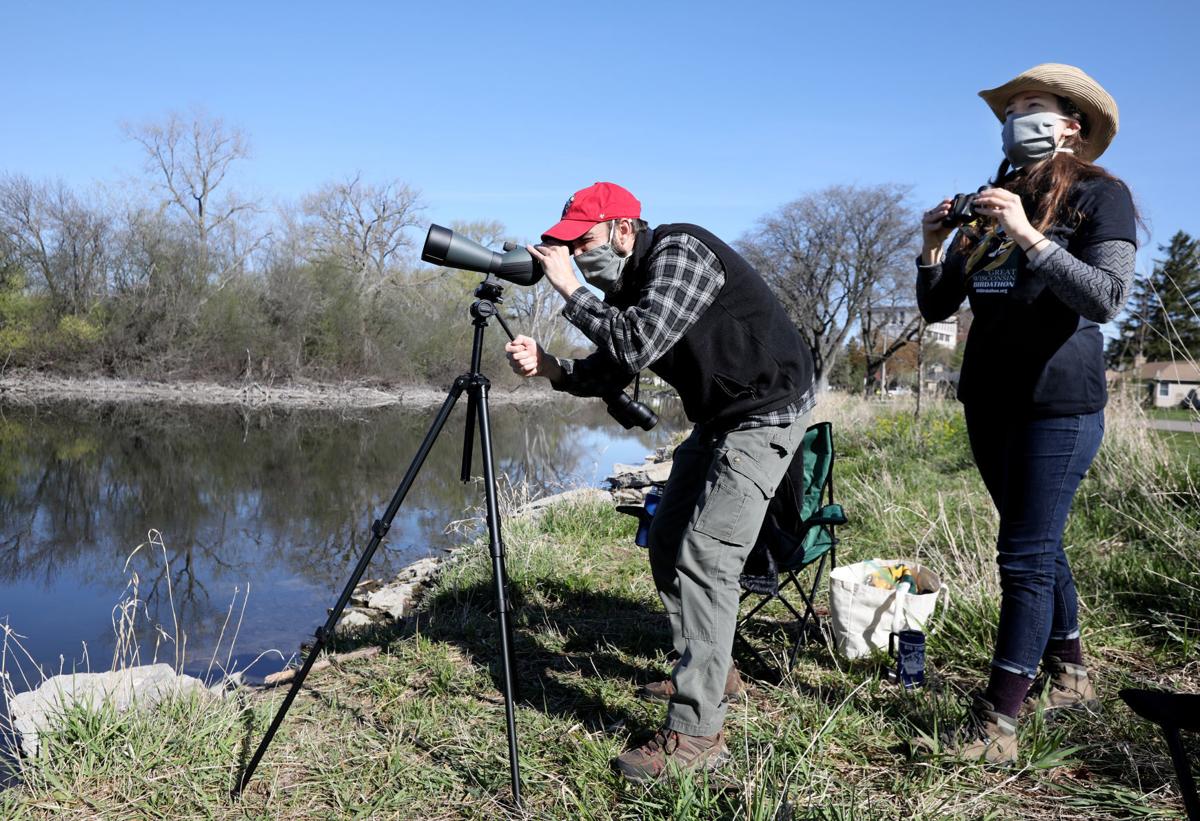 Mike Hansen uses a spotting scope to look for birds with Lauren Koshere of the Natural Resources Foundation of Wisconsin along Wingra Creek during the group's annual birdathon in Madison last week. Normally conducted over one day in May, the event has been extended to Oct. 15 to allow for disruptions from the COVID-19 pandemic. 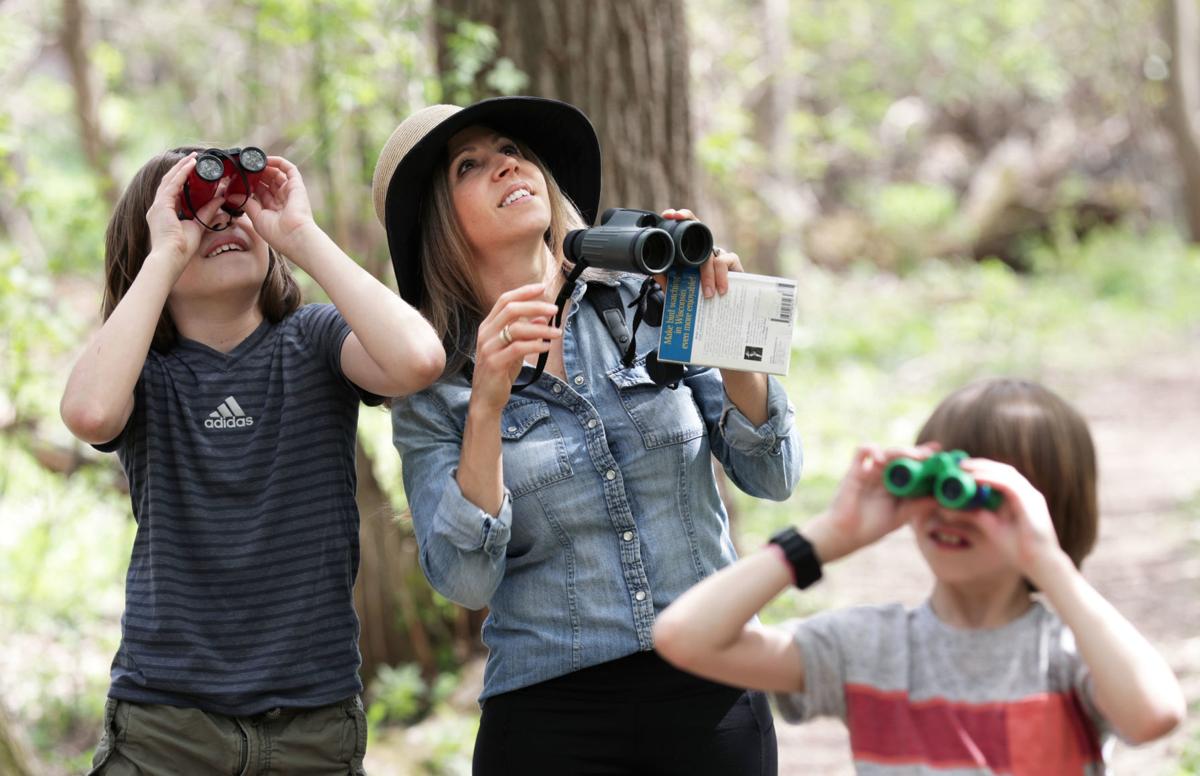 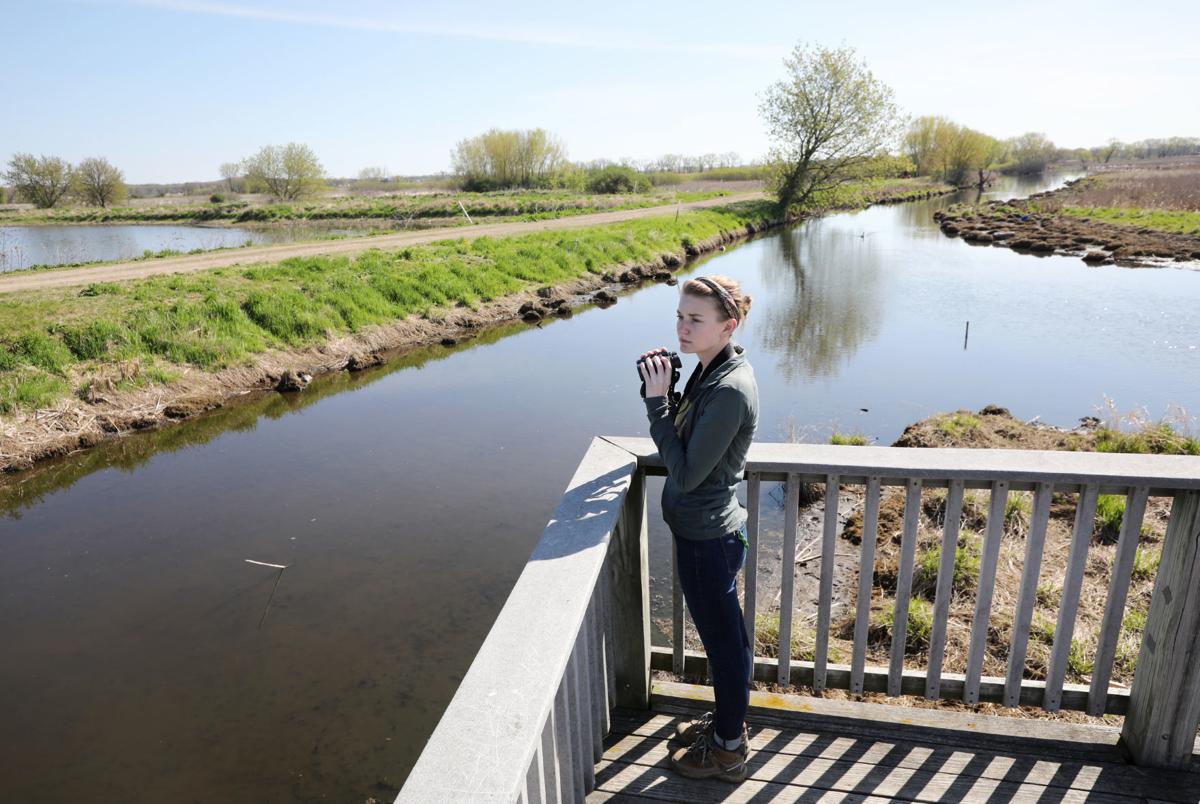 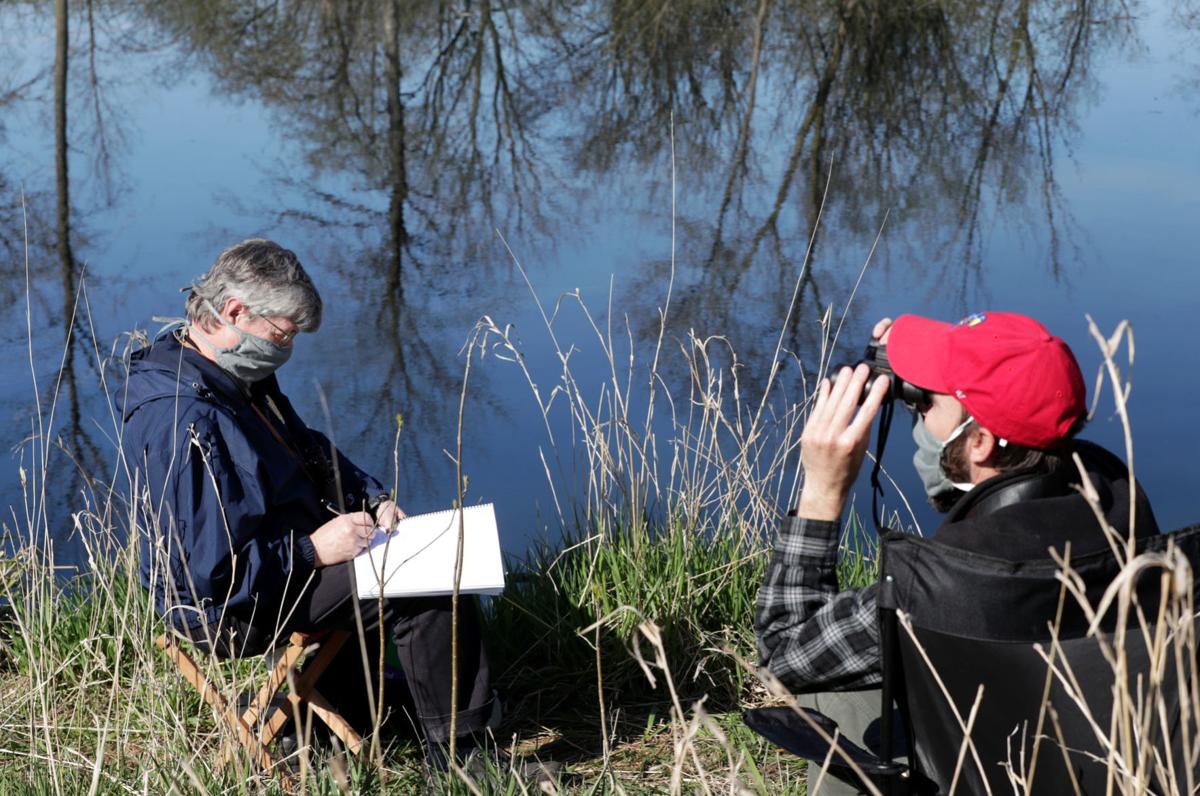 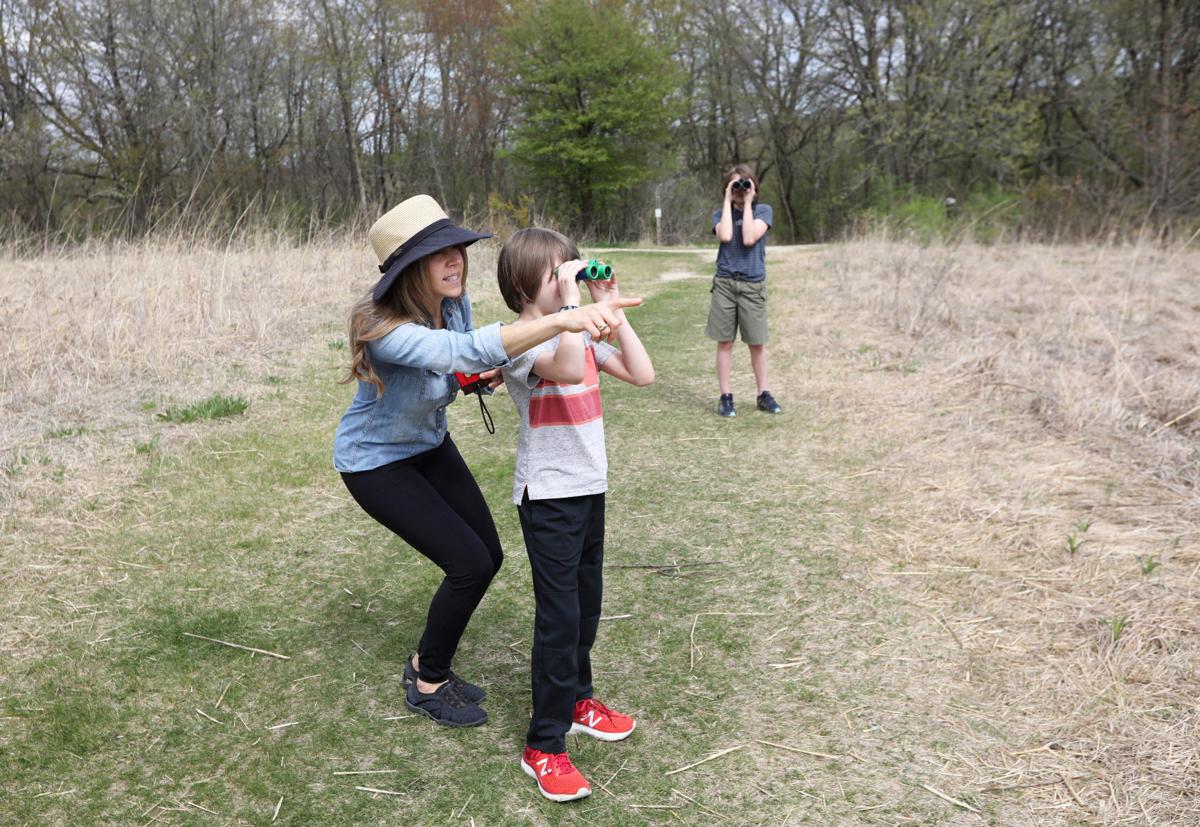 Camille Zanoni directs son Bowen Pratsch to a bird, while her other son, Kylan Pratsch, scans another area at Owen Conservation Park. 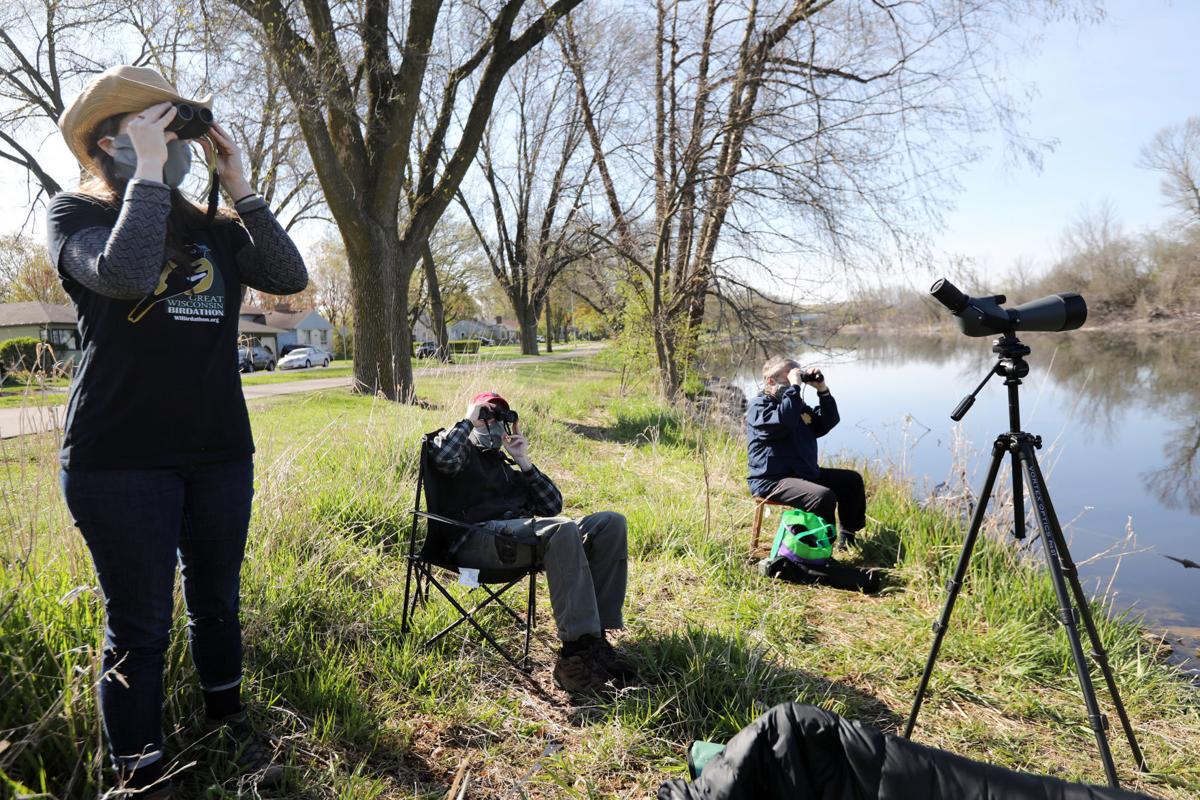 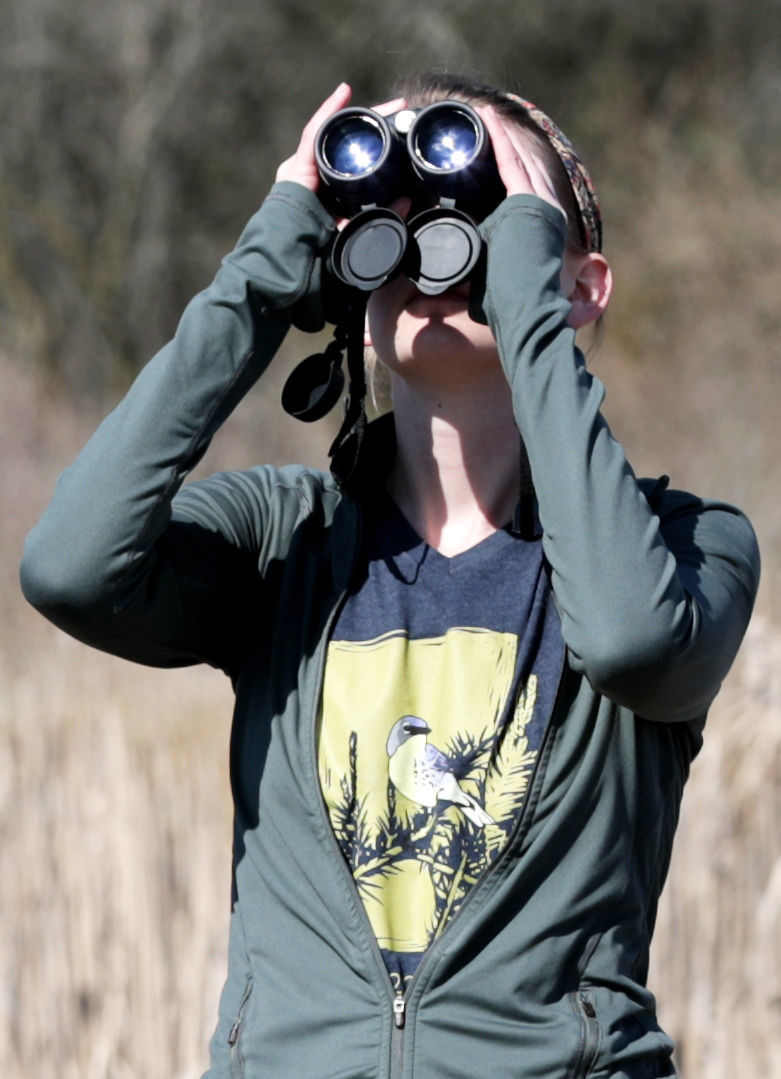 Cameron looks for waterfowl and shorebirds along Nine Springs Creek.

MIKE IVEY For the State Journal

Each spring, hundreds of area bird lovers have grabbed a pair of binoculars and joined others in the Great Wisconsin Birdathon.

Teams ranging from school groups to professional naturalists have participated, collecting pledges for how many different bird species they can spot in a 24-hour period. Since it was launched in 2012, the Birdathon has raised more than $500,000 for bird protection via the Madison-based Natural Resources Foundation of Wisconsin.

But faced with the COVID-19 pandemic, organizers have made some changes this year so the event can continue in accordance with Gov. Tony Evers' “safer at home” order.

Instead of gathering in groups to seek out warblers, orioles or other colorful spring migrants, participants are encouraged to conduct individual counts. Other options include backyard birding, signing up as a solo team or having teammates search in different locations.

“We didn’t want to cancel the event, and birding is actually one of the few pastimes everyone can enjoy while still practicing social distancing,” said Sarah Cameron, coordinator of the Great Wisconsin Birdathon.

In addition to the new format, the time frame to conduct a count has been extended to Oct. 15. This will allow teams to stick within the original May migration period or postpone their Birdathon day until summer or fall as schedules allow.

Other changes include urging participants to scout for birds locally to reduce unnecessary travel, birding only with family or household members and avoiding sharing binoculars, spotting scopes or other equipment.

So far, organizers are getting a good response. Last year, 42 teams from around the state participated in the Birdathon. Forty-five have already signed up this year.

While not a scientific survey per se, the Birdathon does spark some friendly competition among teams with an unofficial record of 190 different species identified in one day. Coming up with a clever name is also part of the fun with teams such as the “Millennial Falcons” and “Three Shrikes and You’re Out” already registered.

Environmental educator Barb Barzen, of Spring Green, is a longtime participant and has organized a competitive team called the “Scan Da Avians” that traditionally meets at Wyalusing State Park at the confluence of the Wisconsin and Mississippi rivers. But it won’t gather this year due to the pandemic.

Instead, Barzen is organizing a virtual team called the “Prairie DALCons” named after her current employer, the Driftless Area Land Conservancy.

“I’ll miss the camping with my friends, but we’re trying to be sensitive to everything that is going on right now,” she said. “It’s still going to be a fun day for us, just different.”

The Great Wisconsin Birdathon comes amid a recent report in Science Magazine pointing to a nearly three billion bird loss in North America since 1970 due to habitat declines, pesticides, invasive species and now climate change. Some species long enjoyed by Wisconsin bird watchers like warblers have seen a 50 percent population decline.

“Large numbers of migrating birds are really struggling right now,” said Matt Reetz, executive director of Madison Audubon. “They face so many threats along the way.”

Created in 1986, the Natural Resources Foundation of Wisconsin works to protect the lands, waters and wildlife in the state via charitable giving. It currently holds over 100 different endowment funds with over $8 million in total assets.

Money raised during the Birdathon over the years has gone toward efforts to address some of the challenges through conservation projects such as the Wisconsin Breeding Bird Atlas II, Bird City Wisconsin and the Neotropical Flyways Project.

But organizers this year are also hoping to offer participants a way to find some joy and inspiration during a public health crisis while also raising awareness about conservation.

“We’ve all been stuck in the house looking for something to do," said David Clutter, executive director of the Natural Resources Foundation of Wisconsin, "and I think keeping the Birdathon going sends an important message.”

Registration for the Great Wisconsin Birdathon is now open. Participants can pick any day until Oct. 15 to conduct their count. To register a team or learn more about the Bird Protection Fund, visit WIBirdathon.org.

First time hunting in Wisconsin? Here's what you need to know

Getting started as a first time hunter as an adult can be an apprehensive experience. To help those interested in getting into hunting for the first time here is a basic guide to getting started.

PFAS: Rules on firefighting foam mired in dispute over definitions

The act restricts the use of foam containing compounds known as PFAS to emergency situations and testing facilities.

The increasing numbers aren’t a new trend, as Wisconsin’s wolf population has risen steadily since nearly being wiped out last century.

Mike Hansen uses a spotting scope to look for birds with Lauren Koshere of the Natural Resources Foundation of Wisconsin along Wingra Creek during the group's annual birdathon in Madison last week. Normally conducted over one day in May, the event has been extended to Oct. 15 to allow for disruptions from the COVID-19 pandemic.

Camille Zanoni directs son Bowen Pratsch to a bird, while her other son, Kylan Pratsch, scans another area at Owen Conservation Park.

Cameron looks for waterfowl and shorebirds along Nine Springs Creek.