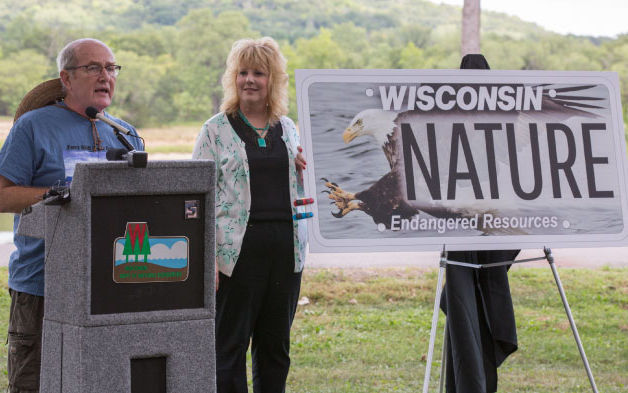 Wisconsin Department of Natural Resources is postponing a reorganization plan despite earlier statements on the importance of finishing it to protect the department from budget cuts. Above, in a file photo, DNR Secretary Cathy Stepp listens during the unveiling of a new license plate design. 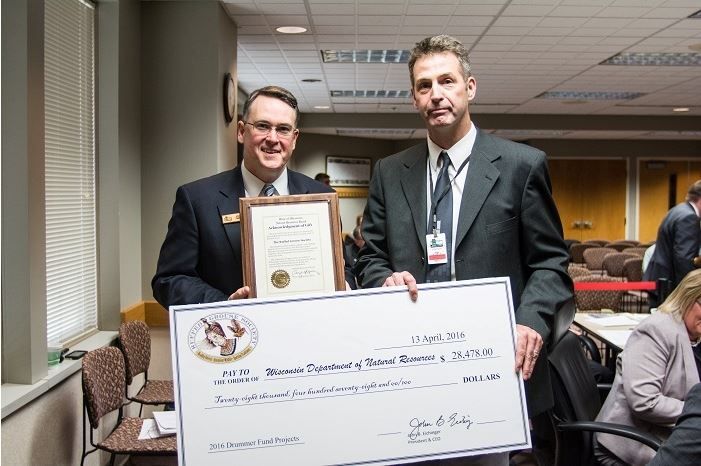 Wisconsin Department of Natural Resources deputy secretary Kurt Thiede, left, is part of the team working on a DNR reorganization. Above, in a file photo, he accepts a donation from Scott Walter, regional wildlife biologist for the Ruffed Grouse Society.

Last winter, a top Department of Natural Resources executive told concerned employees it was “critically important” to finish a reorganization plan by summer because the plan could protect the department from budget cuts.

But on Tuesday, the department announced the reorganization wouldn’t be discussed again publicly until late fall, months into the state budget process and just weeks before Gov. Scott Walker sends his proposed spending plan to the Legislature.

An employee newsletter item on the new timetable said the process was complicated and more time was needed to “get things right.”

But two former DNR secretaries who have been critical of the department’s performance under Walker said the change in timing had the markings of a political decision designed to please the governor or the Legislature.

“It’s hard to understand even major changes taking this long,” said George Meyer, who was secretary under a Republican governor and now directs the Wisconsin Wildlife Federation. “There is obviously something else at play besides the details of the reorganization itself.”

The DNR’s chief spokesman declined to discuss whether the new schedule for the alignment process, as the reorganization is called, would weaken any agency efforts to fend off budget cuts.

“The budget and budget-related alignment issues are both works in progress, so we won’t be commenting on either before they are finalized,” spokesman Jim Dick said in an email.

DNR executives launched the reorganization in July 2015 in a meeting with employees where initial administrative changes and future goals were disclosed on the heels of a state budget that cut more than 90 department positions.

Eight months later in another meeting with employees, DNR deputy secretary Kurt Thiede stressed how important it was to complete the reorganization by summer.

“In the end we will have more compelling data to identify future needs and to qualify the consequences of potential budget cuts,” Thiede said in the videotaped session on Feb. 18. “This will be critically important going into the next budget.”

Thiede made similar points three more times during the 75-minute meeting. As part of the reorganization, DNR was compiling analysis of agency activities and required resources, and this information was needed to prepare for budget talks that would start in summer, he said.

At the time, a department spokesman said the plan was to be finished by June 30. Later, officials said it would be done in July or August.

In announcing the much later timetable Tuesday, the DNR was upbeat as it acknowledged that employees had been wondering when the plan would materialize: “It’s natural for questions to arise over the timing and ultimate direction of the project.

“We are pleased to respond that the alignment continues to move forward with additional time being invested to evaluate core functions and potential outcomes prior to implementation.”

Scott Hassett, who was DNR secretary under Democratic Gov. Jim Doyle, said his casual contacts with agency employees indicate that many are worried, if only because details of the reorganization are being shared only among a small handful of political appointees.

Hassett said the DNR wouldn’t have delayed a plan under these circumstances unless elected officials saw it as potentially unpopular and didn’t want it publicized before fall Legislative elections in a year when DNR failings in protection of water quality have surfaced repeatedly.

Hassett said initial administrative changes made last year might suggest there were plans to break the DNR into two departments — something conservatives sometimes favor — but Walker’s spokesman said the governor wasn’t pursuing that option.

Walker told reporters on Thursday that he has known for a month that the DNR was delaying the reorganization.

“The DNR felt postponing the realignment was the best move for long-term success,” Evenson said when asked if Walker had requested the delay.

Meyer said it was hard to understand why even a major reorganization would take as long as this one has unless it was heading in a direction Walker opposed.

“They’re clearly not going to do something the governor doesn’t want,” Meyer said.

Walker and his fellow Republicans in the Legislature have made many changes in environmental regulations since taking over state government in 2011.

They said one reason for last year’s budget cuts was that the DNR had gone astray by researching the effects of climate change and mining on state resources, and scientists, educators and wildlife manager positions were cut because they weren’t needed for the DNR’s core mission.

The agency’s full-time workforce has been reduced by 15 percent over the last two decades by both Republicans and Democrats.

DNR secretary Cathy Stepp, a Walker appointee, has said that she fights for agency funding and staff in private, but she insists that department employees must be apolitical publicly, deferring to elected officials.

Under Walker and Stepp, information is held closely within the agency compared to past years when DNR officials would tell citizen groups about department needs as a way of building public support for its efforts, Meyer said.

Current DNR leadership is unlikely to publicize any alignment plan that might place pressure on Walker to raise permit fees or other revenue to help the department, Meyer said.

He is currently resisting calls by GOP lawmakers for increased fees or taxes to fix the state’s roads. With or without an alignment plan, he may face a similar conflict over the DNR.

In June a report from the nonpartisan Legislative Audit Bureau documenting DNR failures in protecting water quality that have prompted calls from the Legislature for more funding to beef up a staff that hasn’t been able to keep up with polluters.

The U.S. Environmental Protection Agency, meanwhile, has been after the state since 2011 to clear up 75 deficiencies in water regulations, and it has urged DNR for months to provide clean water to people in Kewaunee County where pollution from large animal feedlots is linked to tainted drinking water in 30 percent of wells.

The rule-making plan was narrowed in response to industry concerns. NRB members called it a good first step — if DNR has enough staff.

The investigation is in response to a 2019 tip to the Office of Inspector General’s hotline that records might have been lost during an annual data backup in Region 5, headquartered in Chicago.

Wisconsin Department of Natural Resources is postponing a reorganization plan despite earlier statements on the importance of finishing it to protect the department from budget cuts. Above, in a file photo, DNR Secretary Cathy Stepp listens during the unveiling of a new license plate design.

Wisconsin Department of Natural Resources deputy secretary Kurt Thiede, left, is part of the team working on a DNR reorganization. Above, in a file photo, he accepts a donation from Scott Walter, regional wildlife biologist for the Ruffed Grouse Society. 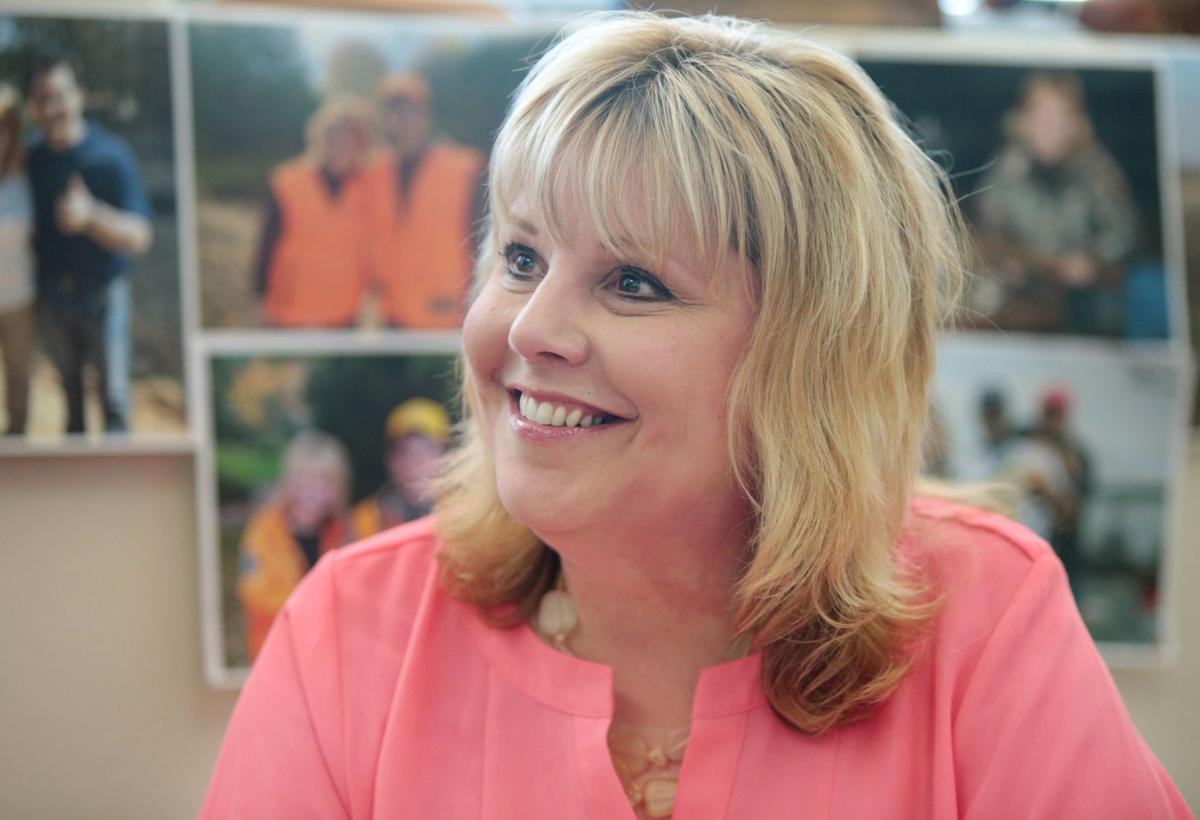