With its towering bluffs, miles of hiking trails, hundreds of campsites and a clear, cold lake that attracts anglers, swimmers, paddlers and scuba divers, Devil’s Lake State Park is an amphitheater of outdoor recreation.

Add in the fact that it’s just a 45-minute drive up Highway 12 from Madison and less than three hours from Chicago’s western suburbs and it’s no surprise that the park’s 1,300 day-use parking spots and 1,300 picnic tables are often all claimed by early afternoon between Memorial Day and Labor Day.

Nestled in the Baraboo Range, Devil’s Lake was formed when the Laurentide Ice Sheet retreated from the area nearly 20,000 years ago, dumping rocks and earth at both ends of what had been an ancient river. Fed by natural springs, the lake formed between the two glacial dams.

“There’s no words for this,” said Nancy Lauff, 66, as she took in the postcard-worthy scene with her husband, Bob, after hiking the East Bluff Trail, a 3.2 mile round-trip trek with 500 feet of elevation change. Their reward: Enjoying waffle cones while seated at a picnic table at the North Shore beach as they watched a flotilla of canoes captained by Sauk Prairie Middle School students ply the glass-like surface of the 360-acre lake.

“This is beautiful,” she said. “I compare this to Canada.”

Except no passport or currency exchange is required. It’s right here, in the Midwest.

Created in 1911, Devil’s Lake is Wisconsin’s third-oldest state park behind Interstate (1900) near St. Croix Falls and Peninsula (1909) in Door County. Instead of grizzly bear, moose and elk, the park is home to fox, raccoon, deer and the occasional bobcat. Turkey vultures are the most noticeable. The winged scavengers spend their days surfing the park’s thermal air currents, skimming tree tops and rock outcroppings.

But its history goes back far beyond that.

“This is very unique. It just rises up out of a generally flat area,” said Derrick Mayoleth, who hikes the park three times or more a week and in 1996 started devilslakewisconsin.com. “The geology is very convoluted. These bluffs are old. They’re older than the Rocky Mountains, they’re older than the Himalayas. There are no fossils because they are older than the dinosaurs.”

“A large body of broken fragments have accumulated along the edge of the water rendering it very difficult to walk along the shore,” Increase Lapham, a celebrated Wisconsin author, scientist and naturalist, wrote in 1849. “Yet two of our party made a circuit of the lake, jumping from rock to rock as best they could.”

With the routing of a rail line through the lake valley, tourism began booming.The first of several hotels was built in 1866 and the railroad was completed in 1873. The accommodations, no longer open, included the Kirkland Resort, the Minniwauken House, the Lake View Hotel and the Messenger Hotel and Resort.

By comparison, Peninsula State Park in Door County recorded 1.2 million visitors that year. The 2.1 million visitors to Devil’s Lake last year was down just over 100,000 when compared to 2019, but the park was closed for a time in 2020 due to the pandemic.

The popularity of the park is perhaps its Achilles heel. That’s why Mayoleth recommends visiting during the early part of the week or at the crack of dawn as a way to avoid the crowds, which can be crushing at times.

Mayoleth, who recently hiked the 11-mile segment of the Ice Age Trail that runs through the park, also recommends visitors expand their explorations to beyond the park and the adjacent Parfrey’s Glen, which can also become overrun with visitors. The area is surrounded by other state parks and natural areas, all with their own story and geography.

“So start (in Parfrey’s Glen and Devil’s Lake State Park) and then get out that map and start looking for the other places,” said Mayoleth, an avid photographer. “There’s a lot of cool spots.”

Circus history, restored trains, whooping cranes and Aldo Leopold's Shack are among the draws along with the stimuli of Wisconsin Dells.

The Sauk Prairie State Recreation Area just south of Devil’s Lake and along Highway 12, was the home of the largest ammunition factory in the world during World War II but the buildings have been removed and the area is being returned to its natural state. Gibralter Rock State Natural Area is a short drive away via the free Merrimac Ferry and is home to a 200-foot-tall bluff that holds an Instagramable cedar tree and panoramic views of Lake Wisconsin.

Jim Essington, 72, of Winnebago, Illinois, hiked the bluffs of the park with his wife in mid May and on a near-perfect Wednesday morning used a hiking stick to traverse the rocks, stream and crags of Parfrey’s Glen, the state’s first natural area and which reopened last month after more than a year of being closed. There were few other people in the gorge, lined with skunk cabbage and steep cliffs. The creek offered a constant din echoing off the sandstone walls.

For those looking for a longer stay at Devil's Lake, the park offers three regular campgrounds with a total of 423 sites and nine group campsites that can accommodate a total of 240 campers. All can be reserved at wisconsin.goingtocamp.com or by calling 888-947-2757.

Quartzite campground, a former golf course, is mostly open and grassy, and where many of the largest recreational vehicles end up. Northern Lights campground has a similar layout but is only a half mile from the lake and has two sites for those with disabilities. It's also the oldest campground in the park and opened in 1939 with the help of the Civilian Conservation Corps, which built three of the four bathroom and shower buildings.

Ice Age campground, about a mile from the lake, has only non-electric campsites, is partly wooded and partly open and grassy, has a concession-operated campground store and three sites available for people with disabilities.

There are also concessions buildings on both the north and south shores of the lake that sell food and groceries, basic camping items, ice, firewood, souvenirs, shirts and hats. Both buildings rent rowboats, paddleboats, kayaks and canoes during summer.

The nature center at Devil's Lake, currently closed due to the pandemic, is home to live Wisconsin reptile and amphibian displays, but a new, larger facility is being discussed. During the summer, nature programs are scheduled for every day of the week. Themes include snakes, rocks, spiders, and bats. The downstairs area of the nature center houses historic photographs dating from the late 1800s well into the 20th century.

From the editor: Devil's Lake, other hot spots in Wisconsin, Indiana, Iowa and Illinois are worth your while.

Watch now: What's that in the road? It might be a turtle

The Natural Resources Board unanimously supported Wednesday purchasing an addition for Wisconsin's most popular park. 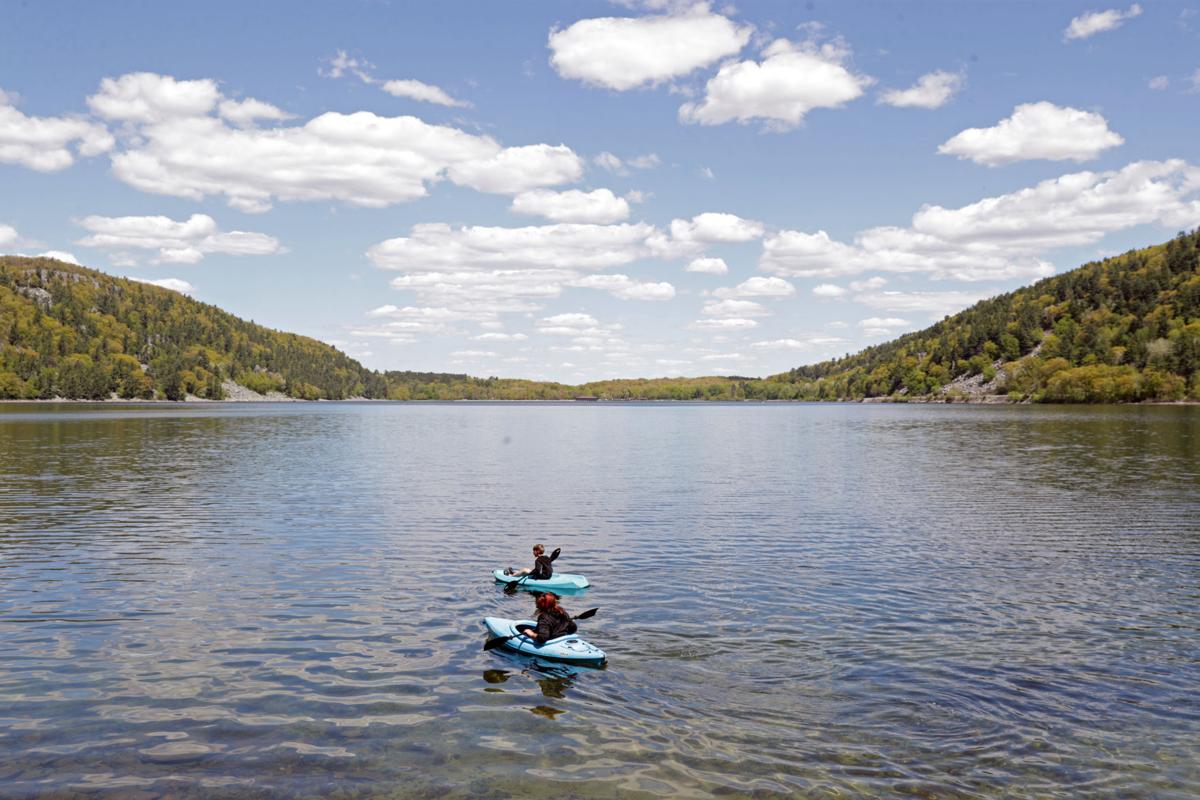 Cherie Kovnesky, bottom, kayaks with her son, Nohlin Kovnesky, on a placid Devil's Lake. The spring-fed lake was formed after retreating glaciers dumped rocks and earth at either end of an ancient river, creating two natural dams. 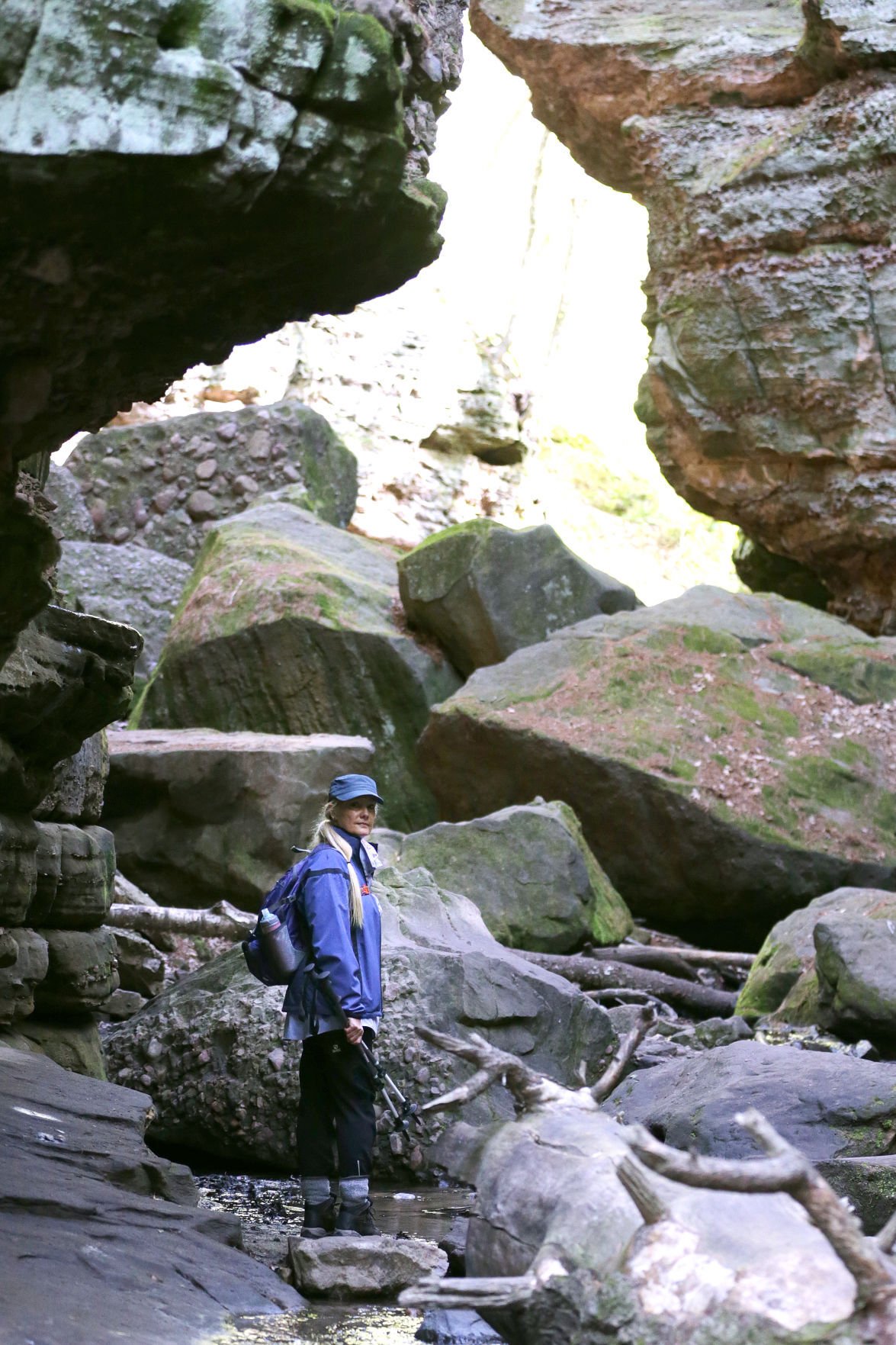 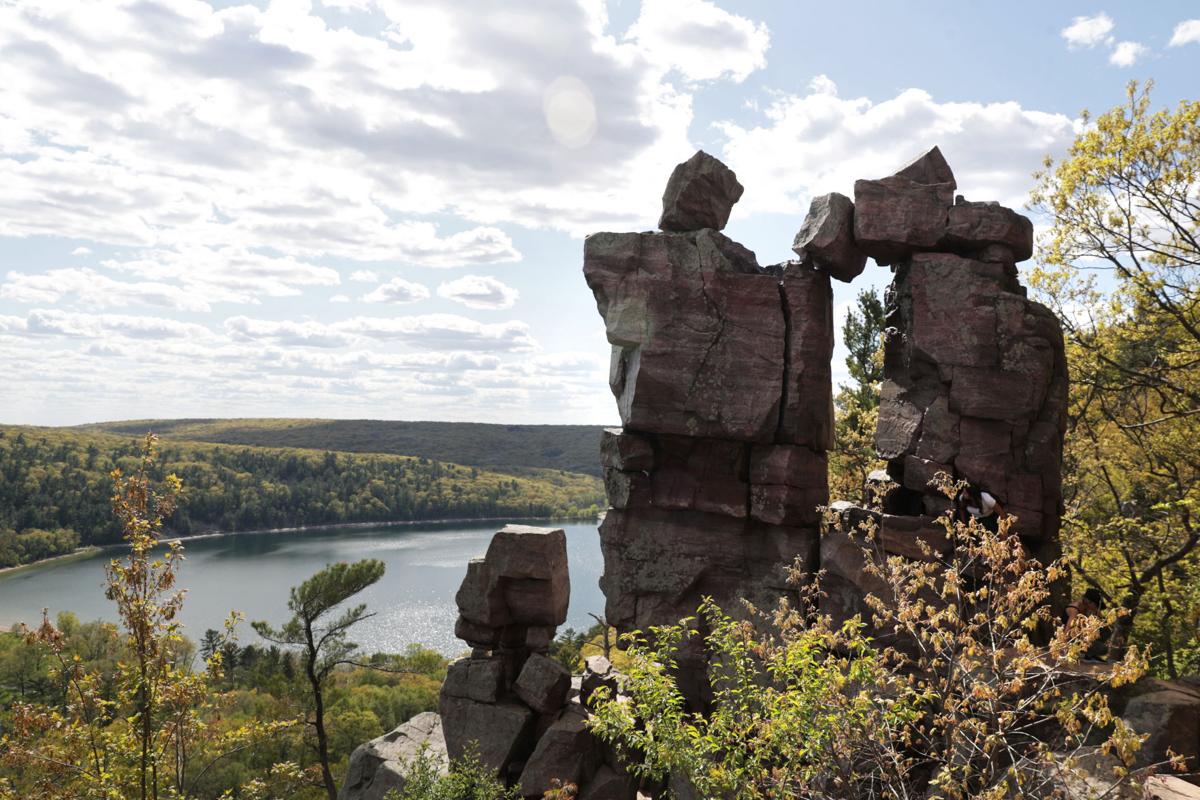 Miles of trails traverse the West and East bluffs of Devil's Lake State Park, opening to breathtaking views such as this one of the Devil's Doorway rock formation at the southeast corner of the lake. 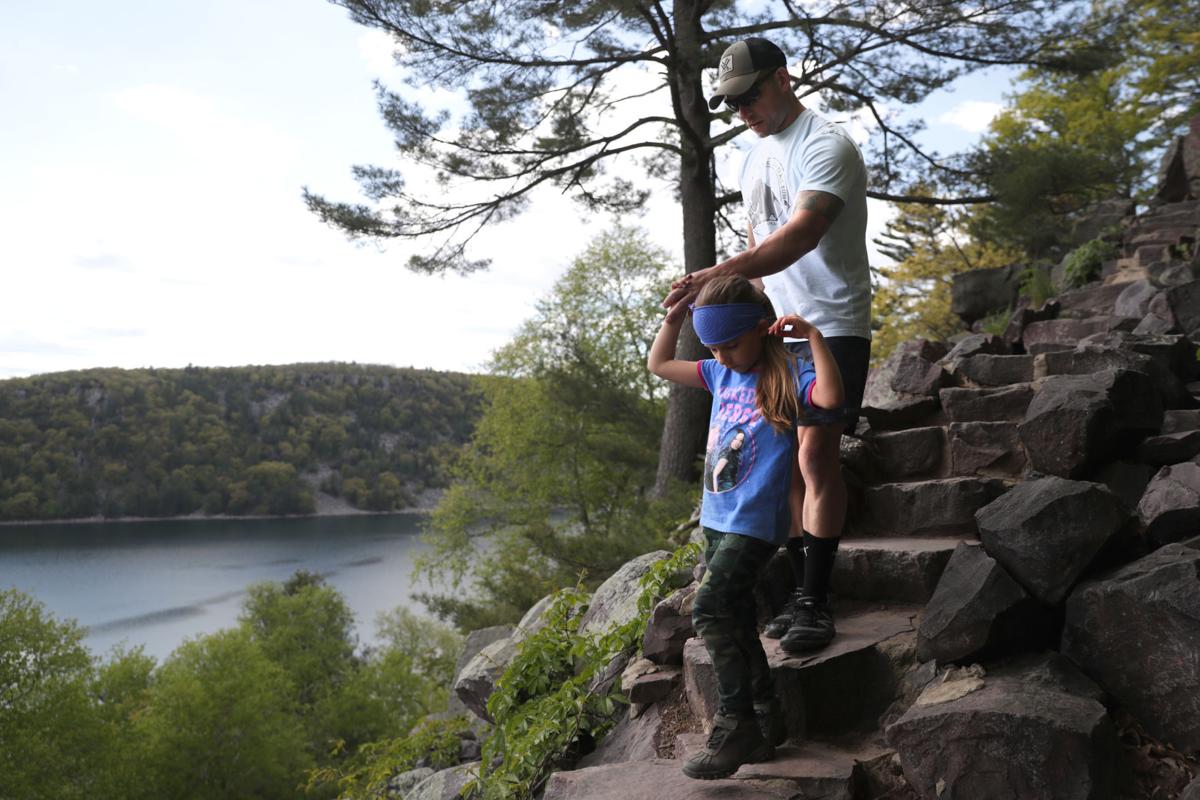 Violet Fritsch, 5, and her dad Nate Fritsch step down some of the rock steps at Devil's Lake. Trails up the East Bluff of the park cover 500 feet of elevation change. 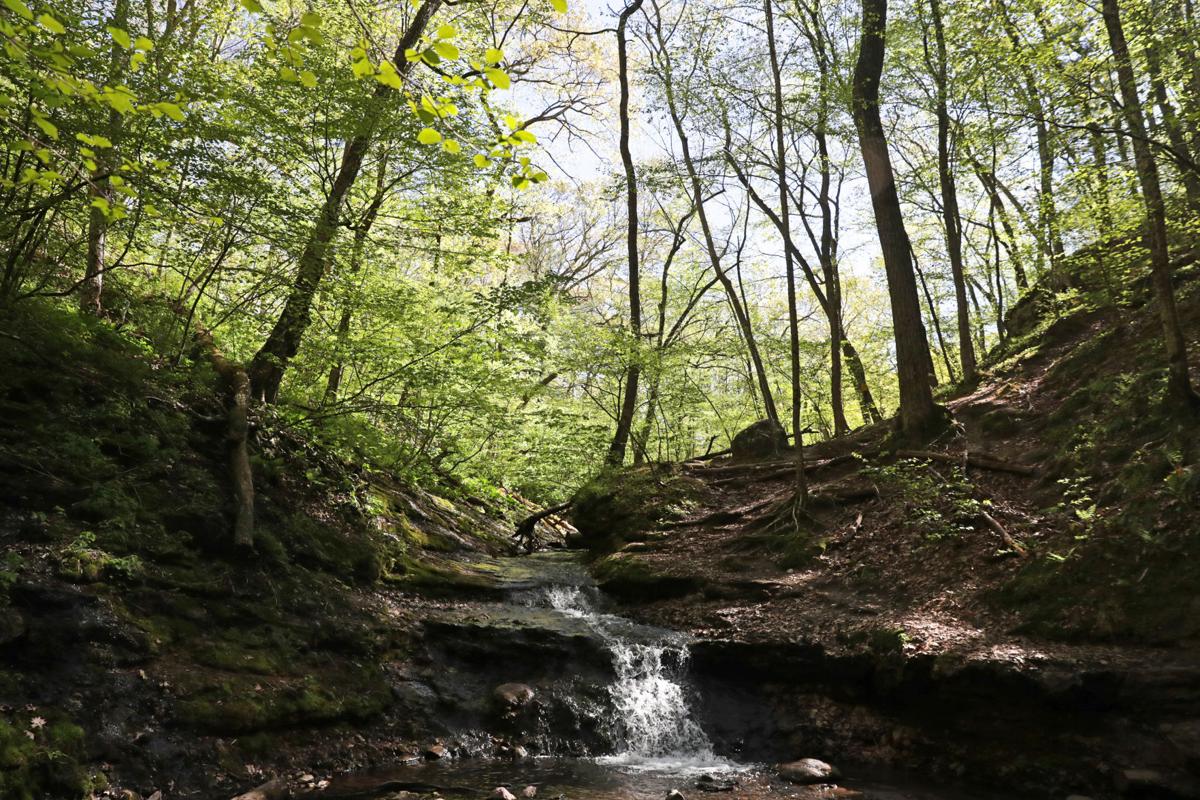 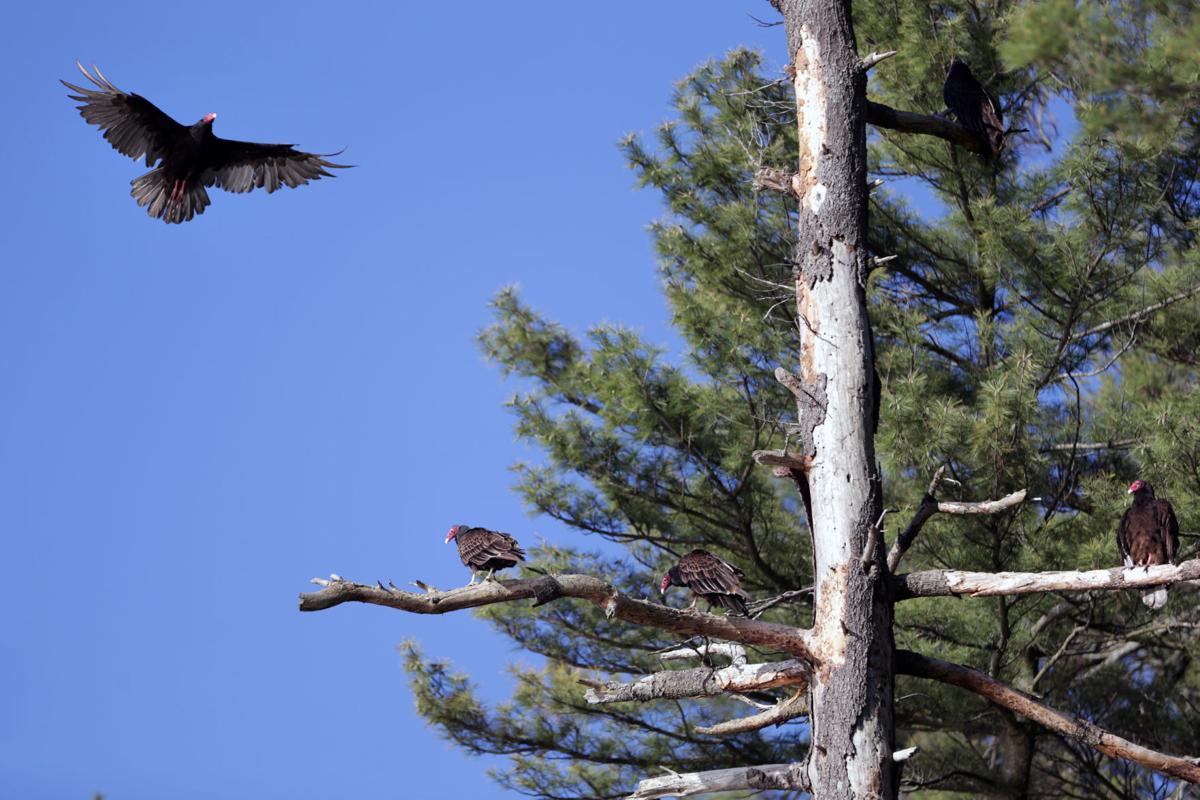 If Devil's Lake had a mascot, it'd be the turkey vulture. The winged scavengers spend their days surfing the park's thermal air currents, skimming tree tops and rock outcroppings. 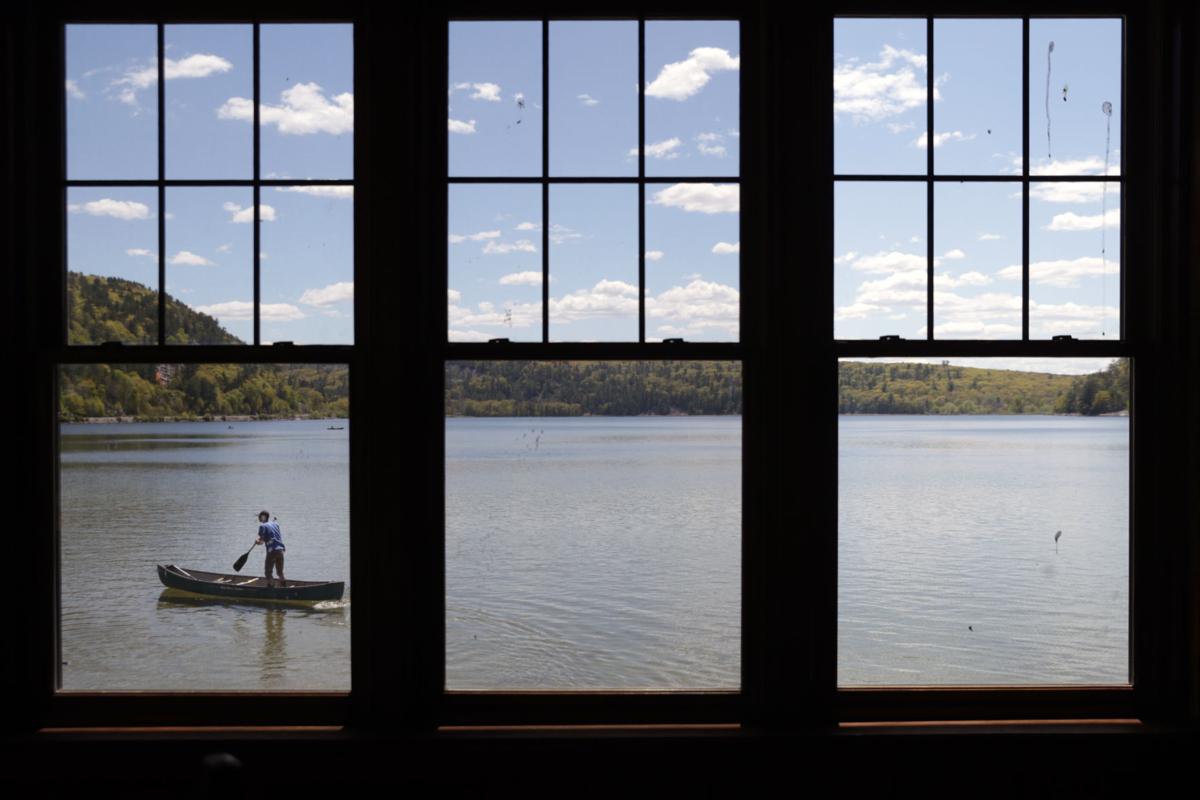 A boater paddles his canoe along the north end of Devil's Lake, framed through the windows of the North Shore Chateau, one of the park's concessions and events facilities. 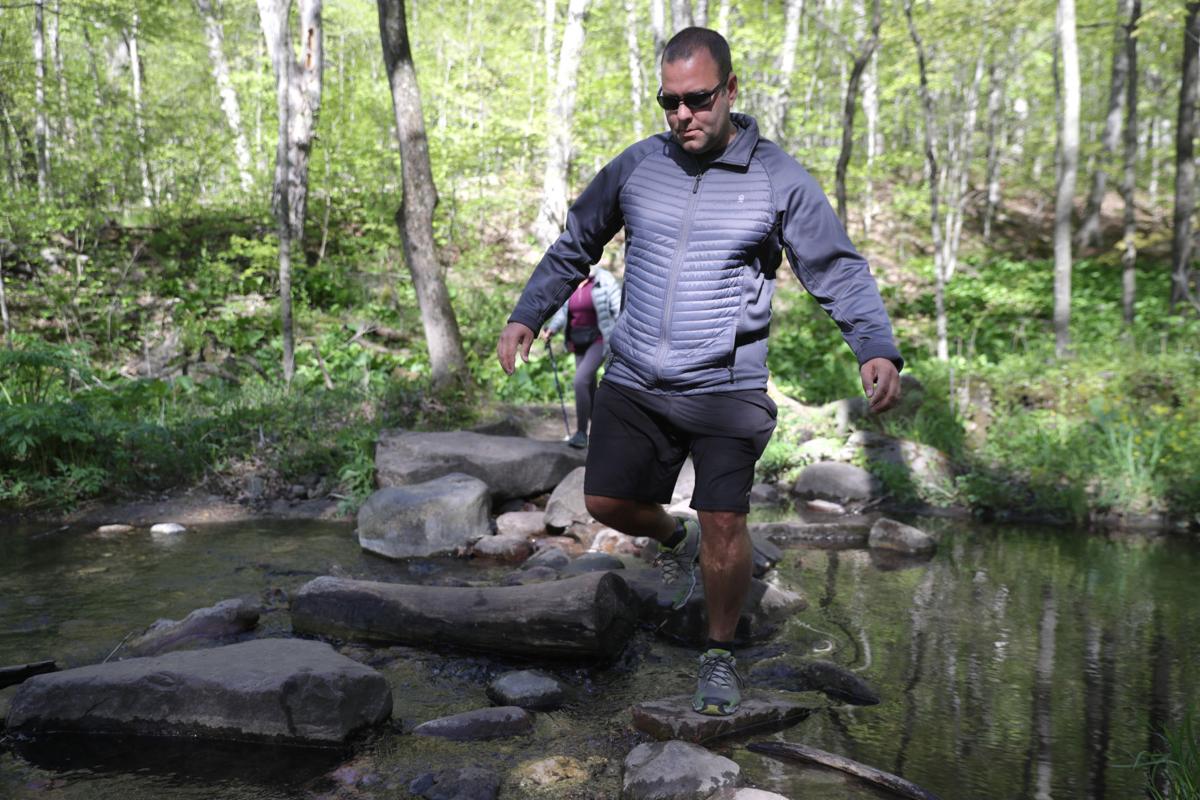 Matthew Essington of Illinois crosses the stream at Parfrey's Glen. 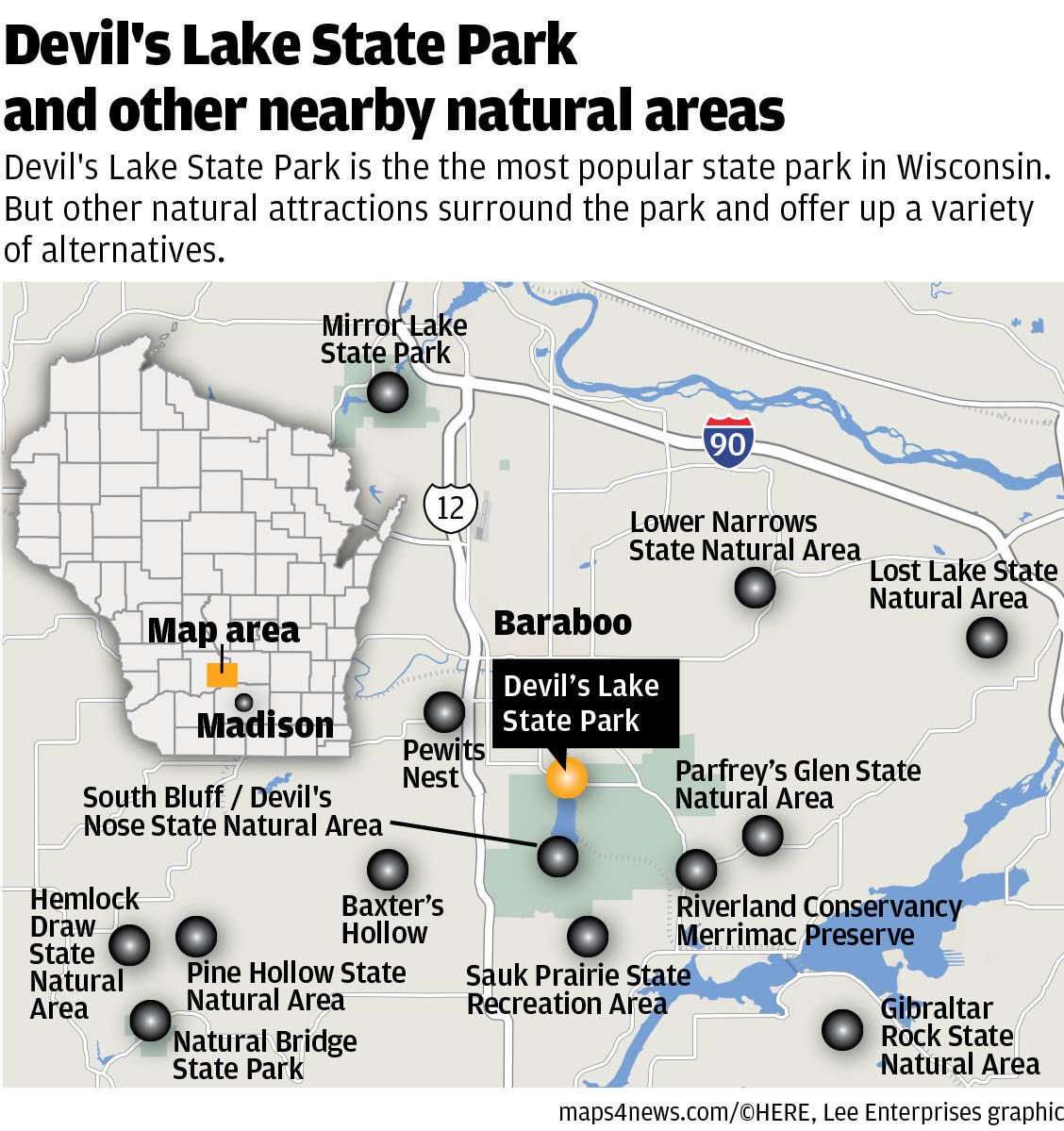