Federal wildlife authorities are proposing to allow a controversial power line to cross one of the largest blocks of floodplain habitat in the continental United States, while Wisconsin officials have granted the project a permit to temporarily fill some wetlands.

The utilities propose building 75- to 195-foot towers to carry wires along a 260-foot corridor through the refuge from the Turkey River bottoms to the site of the former Nelson Dewey power station north of Cassville.

The line would disturb about 39 acres of the 240,000-acre refuge, including some land already disturbed by power lines and roads.

As part of the project, the utilities would abandon an existing line just to the south and restore about 28 acres of habitat. They must also purchase about 38 acres of replacement habitat near Cassville that would be donated to the government to become part of the refuge.

The federal Fish & Wildlife Service, which manages the lands, last week issued a preliminary determination of compatibility, meaning it intends to allow construction of the power line. The agency is accepting public comments through Nov. 26.

According to the FWS review, the new line would create a visual impact and would result in habitat fragmentation. Because it is replacing an existing line and would run parallel to an existing gravel road and railroad, there would be a net reduction of fragmentation over the next three to five decades, the Fish & Wildlife Service concluded. 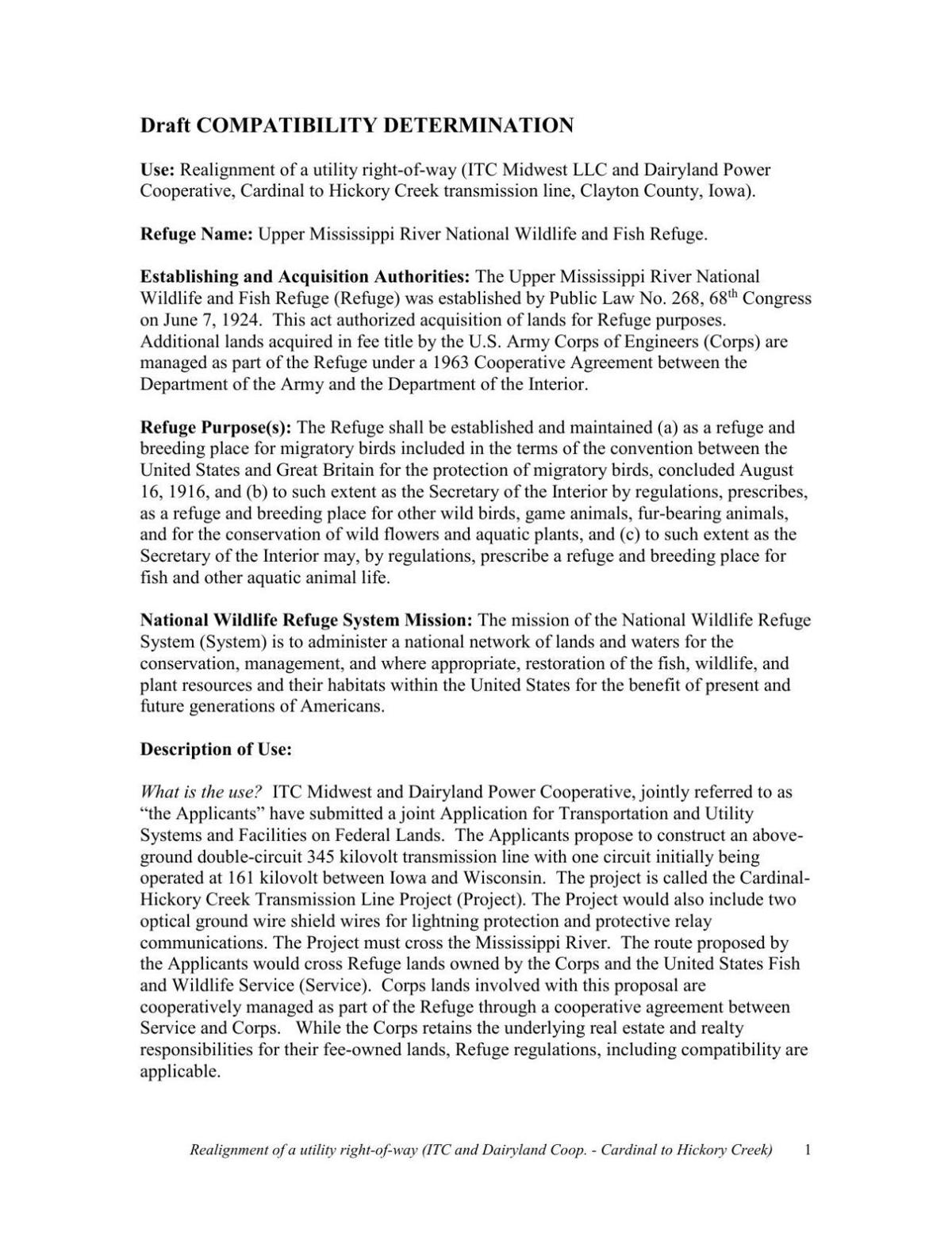 Scott Strand is a senior attorney with the Environmental Law and Policy Center, which is representing two key opponents of the line, the Driftless Area Land Conservancy and the Wisconsin Wildlife Federation.

Strand questions the Fish & Wildlife Service’s interpretation of a 1997 law intended to eliminate incompatible uses of the public lands.

“They’re trying to say because there’s an existing line ... you can build whatever you want,” Strand said. “They’re making the argument that they have an unlimited right to expand.

“What kind of precedent does this set for the rest of the system?” he said.

The Mississippi: A river within reach of its visitors

Established in 1924, the refuge covers more than 261 miles of the river between Wabasha, Minnesota, and Rock Island, Illinois, and attracts some 3.7 million users each year. It is considered one of the most important corridors for fish and wildlife in the United States and is listed as a wetland of international importance.

The utilities reviewed seven alternate river crossings, including four outside the refuge, but determined only two were feasible — both within the refuge. Among the reasons cited for rejecting the other crossings were their proximity to residential areas and conflicts with transportation infrastructure.

Strand said the Fish & Wildlife Service should force the utilities to do a more thorough evaluation of alternatives, echoing calls from U.S. Sen. Tammy Baldwin, D-Madison; Rep. Mark Pocan, D-Black Earth; and Rep. Betty McCollum, a Minnesota Democrat who chairs the House committee in charge of funding the Department of Interior.

“This refuge is at the heart of the Mississippi Flyway for migratory birds and provides critical protected habitat for a number of species,” McCollum wrote. “Making the refuge the de facto route simply because it is determined to be in the path of least political resistance is unacceptable in my view.”

A joint venture of American Transmission Co., ITC Midwest and Dairyland Power Cooperative, the $492 million line, as approved by Wisconsin regulators, will follow a roughly 100-mile route primarily along highway corridors through Montfort, Dodgeville and Mount Horeb. The costs will be passed on to ratepayers in 12 states, with about $67 million falling to Wisconsin.

The utilities and clean-energy advocates said the line is needed to bring wind power from the West, while opponents questioned the public value.

Construction is expected to begin in 2021, pending approval from Iowa regulators and federal agencies. Opponents have asked the Public Service Commission to reconsider its approval and have vowed to appeal the case in the courts.

Last week, the Wisconsin Department of Natural Resources granted approval for the utilities to temporarily fill about 13 acres of wetlands for construction and to permanently clear 4.6 acres of forested wetlands.

The Fish and Wildlife Service is accepting comments on its compatibility determination through Nov. 26.