As record-breaking cold swept across Texas this week, millions of people were left shivering in the dark as the state’s power grid failed to meet the surging demand for electricity, crippled by temperatures in the single digits.

So why does the power continue to work in places like Wisconsin, where bitter cold is a way of life? The reason is simple: Generators in the Upper Midwest are designed to work in frigid conditions, unlike those in Texas.

“We designed all our infrastructure for these bitter-cold temperatures,” said Paul Wilson, a professor of nuclear engineering at UW-Madison who studies electrical systems.

“We design everything with the understanding that it can get down to 40 degrees below zero and even stay there for a few days,” said Madison Gas and Electric spokesman Steve Schultz. “We also test our equipment regularly to make sure it’s working properly and prepared for frigid conditions.”

Wind turbines are equipped with winter weather packages such as heating elements to keep ice off the blades and insulated gearboxes, allowing them to work at temperatures as cold as 22 below zero.

“This is just something we do to ensure we can continue to provide our customers with safe, reliable service,” Schultz said. “It’s really just part of our planning and design process.”

Industry experts say there are no explicit regulations that outline cold weather reliability, but there are economic incentives in regulated states like Wisconsin, where electricity rates are structured to give utilities a return on their investments in power plants.

“In a place like Texas where you’re competing to be the cheapest all the time you’re able to take those risks,” said Marcus Hawkins, a former engineer with the Wisconsin Public Service Commission who now runs a multi-state regulatory organization. “Any added capital costs makes you less attractive to the market.”

‘A mix of everything’

Despite claims from some right-wing politicians and pundits who see renewable energy as a threat to the fossil fuel industry, frozen wind turbines were a small part of the problem in Texas. The cold snap there has affected virtually every type of generator, including the coal and natural gas plants that provide about three quarters of the state’s electricity.

All sources came up short, but the governor’s blame is misplaced. The facts are, wind + solar came up 1 GW short of what was expected for supplying winter peak demand, and gas + coal about 30 GW short. See data herehttps://t.co/y6ueMSsmCm and https://t.co/tyss5ostrC https://t.co/zLGydo6w4M

In many cases it was an issue of supply. With gas wells frozen and natural gas being diverted for heat, many plants were left without fuel. In other cases, plants simply froze because they were designed to operate in extreme heat and lack insulation — or even walls — to protect against this type of cold.

One of the state’s four nuclear reactors was down for at least a day because an outdoor safety sensor froze.

“It’s a mix of everything coming together,” said Line Roald, an assistant professor of electrical and computer engineering at UW-Madison. “It’s the generators we think of as being super reliable not being reliable at all.”

Compounding the problem, Texas long ago isolated most of its electric grid from the rest of the country in order to avoid federal regulation, making it nearly impossible to import power from neighboring states.

And about 60% of Texas homes rely on electricity as the primary source of heat (compared to about 16% in Wisconsin, according to the U.S. Census Bureau), so demand spiked just as the weather was knocking out the supply. Because a supply imbalance can bring down the entire system, utilities began implementing “rolling blackouts,” which in some cases have now lasted for days.

It is important also to remember that the #TexasBlackouts are not just caused by failures at power plants. The natural gas supply chain is also failing and that's preventing plants that could operate from getting fuel https://t.co/QaVra4VXHE ERCOT market has ~no influence there.

What happened in Texas — unusually deep and widespread cold — is the type of low-probability, high-impact event that Roald has been studying.

Utilities can build power plants to withstand all kinds of weather conditions, but it costs more money. On the other hand, people want cheap electricity.

“Which scenario should you plan for?” Roald said. “It’s a really tricky question to answer.”

These photos show what our crews at generating plants are facing as they work to return our power plants back to service. We are asking our customers to voluntarily reduce their electricity usage where possible, especially between 5- 9 pm. Learn more ➡️ https://t.co/AZIXIS4BDt. pic.twitter.com/qwa0CVzvAb

Even with the preparations, the Midwest grid has been challenged by extreme cold.

During the polar vortex event in January 2019, temperatures in the Dakotas and northern Minnesota dropped to as low as minus 45 degrees, forcing even winterized wind turbines to shut off before gearbox lubricants could freeze.

Because the grid operator, the Midcontinent Independent System Operator (MISO), wasn’t aware of the weather limitations, wind production fell much faster than expected on the morning of Jan. 30.

Probably the most important question is why planners did not anticipate that so much natural gas generation would be unavailable during an event like this, and have a plan to address that. 7/x

That, combined with unexpected outages at some fossil fuel generators, led MISO to declare an emergency, though there were no blackouts.

In a winter-readiness briefing this fall, MISO forecasting analyst Adam Simkowski said the organization has since collected cold weather limits for about 99% of the turbines in the 15-state territory, which stretches from Canada to Louisiana.

A MISO spokesman declined an interview request and did not respond to questions sent Wednesday. But representatives from Wisconsin’s four largest utilities said their turbines have operated normally during the past two weeks, and the system’s vast geographic footprint means it’s less vulnerable to a single weather event.

Xcel Energy, of the region’s largest wind energy producers, said some of its turbines did hit the minus 22 cutoff threshold this week while others were idle because there wasn’t enough wind.

The biggest threat is likely an ice storm that would take out power lines, not generators, Roald said.

While it’s not invincible, experts say Wisconsin’s grid is built to withstand most of what nature can throw at it.

The Feb. 19 State Journal article “Wisconsin’s electrical grid is built for this” pointed out that, while Wisconsin's energy grid is hardened …

The seven largest investor-owned utilities will also be required to complete a detailed customer energy burden analysis to evaluate what portion of household income their customers spend on utility services.

Snowstorm Sunday will move quickly across Wisconsin. Here's how much will fall and when

The storm system will deliver just enough wet, heavy snow to cause slippery travel conditions as it moves quickly through Wisconsin on Sunday, according to forecasters. 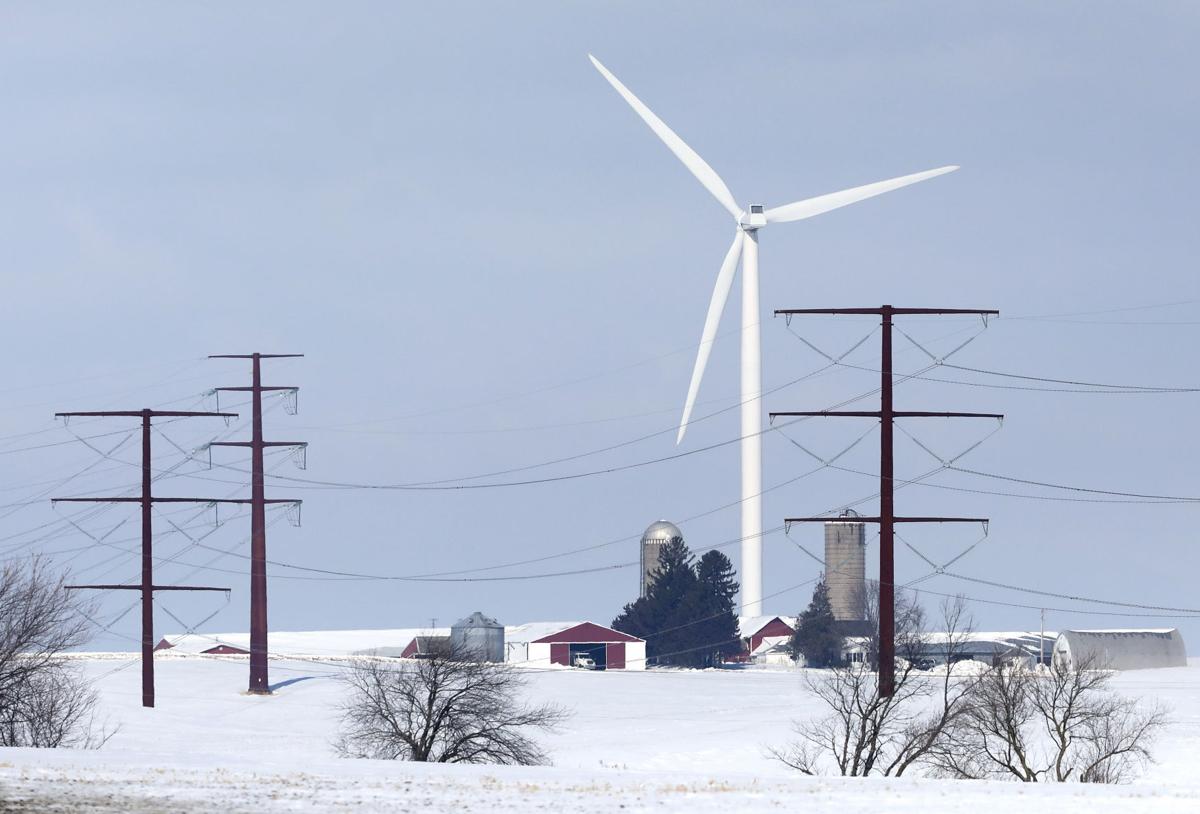 Like most turbines in the Upper Midwest, the six at Epic Systems' Galactic Wind farm near Waunakee are equipped to function in frigid temperatures. 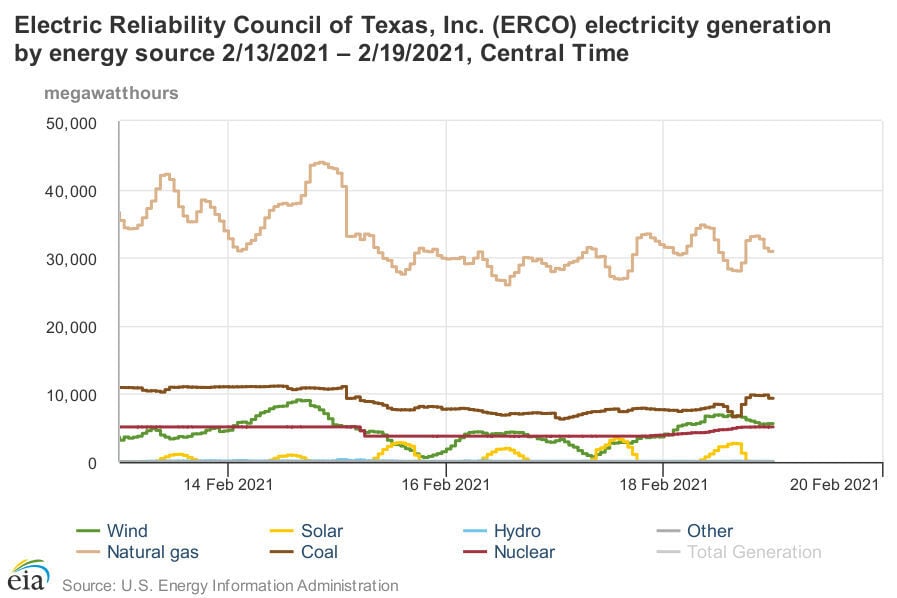 This chart from the U.S. Energy Information Administration shows generation by source for the electric grid covering most of Texas. Between 1 a.m. and 3 a.m. on Feb. 15, the grid lost nearly 11,000 megawatts of fossil fuel generation. A nuclear reactor tripped offline a couple of hours later, losing another 1,350 megawatts. 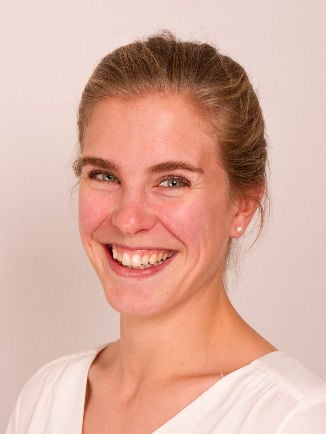 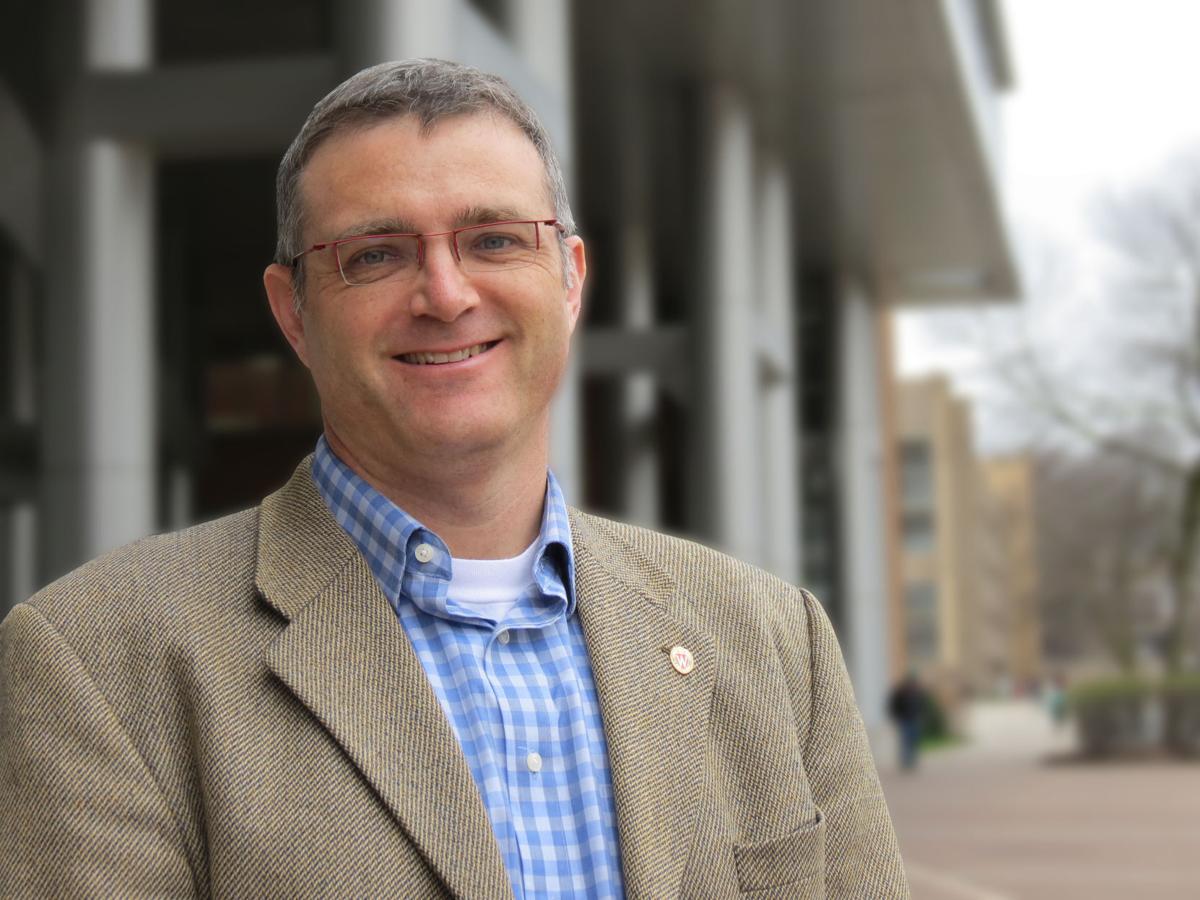