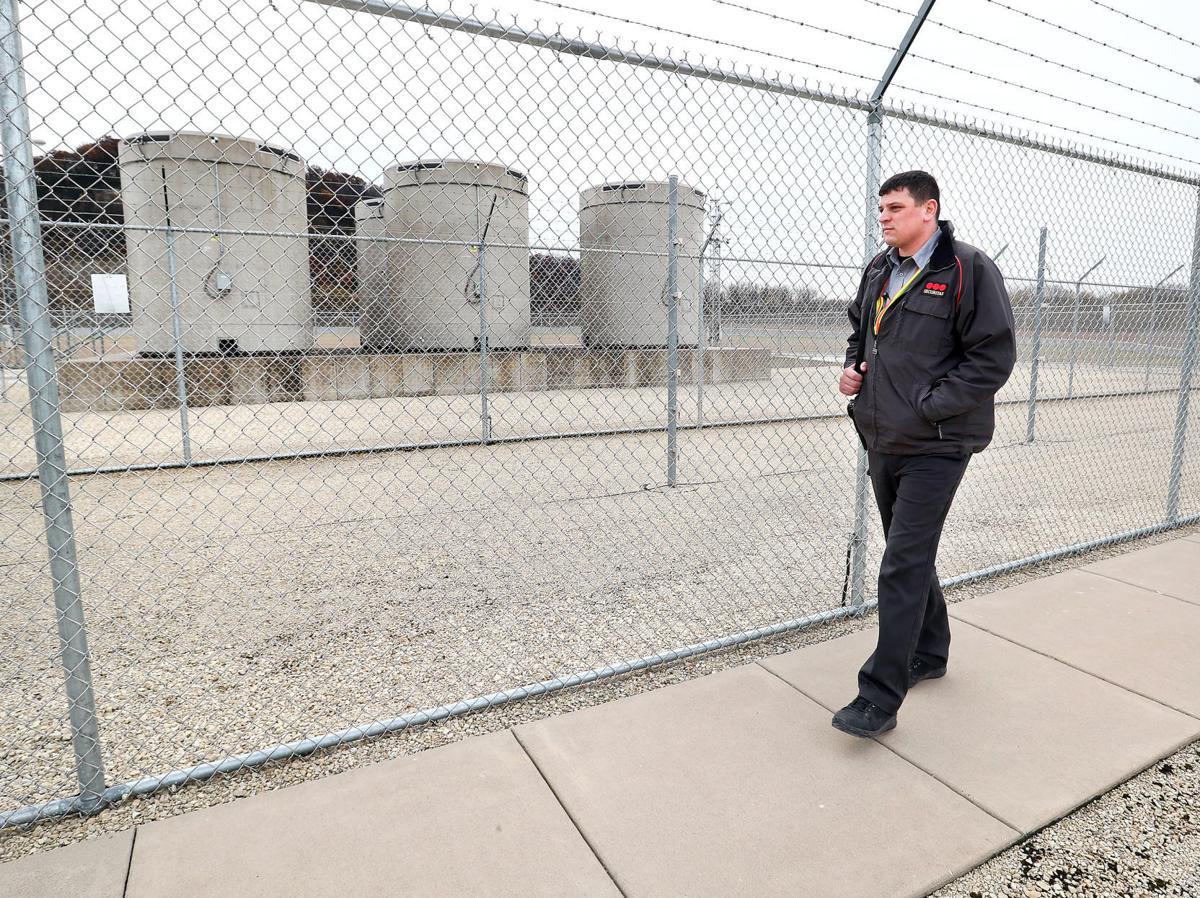 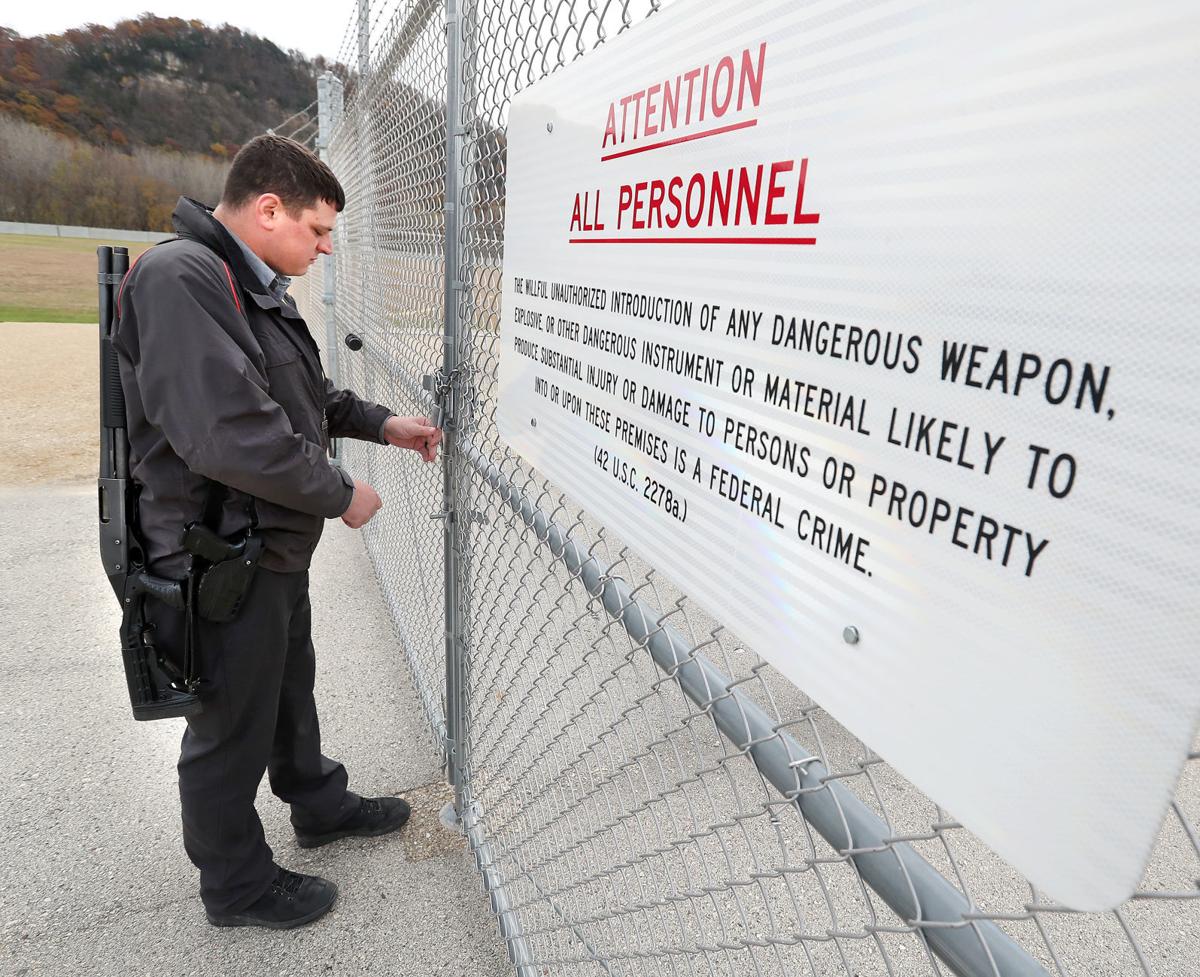 Securitas security guard Micah Buncak checks the locks of the fence containing the five casks filled with spent fuel from the La Crosse Boiling Water Reactor at the Dairyland Power plant in Genoa. 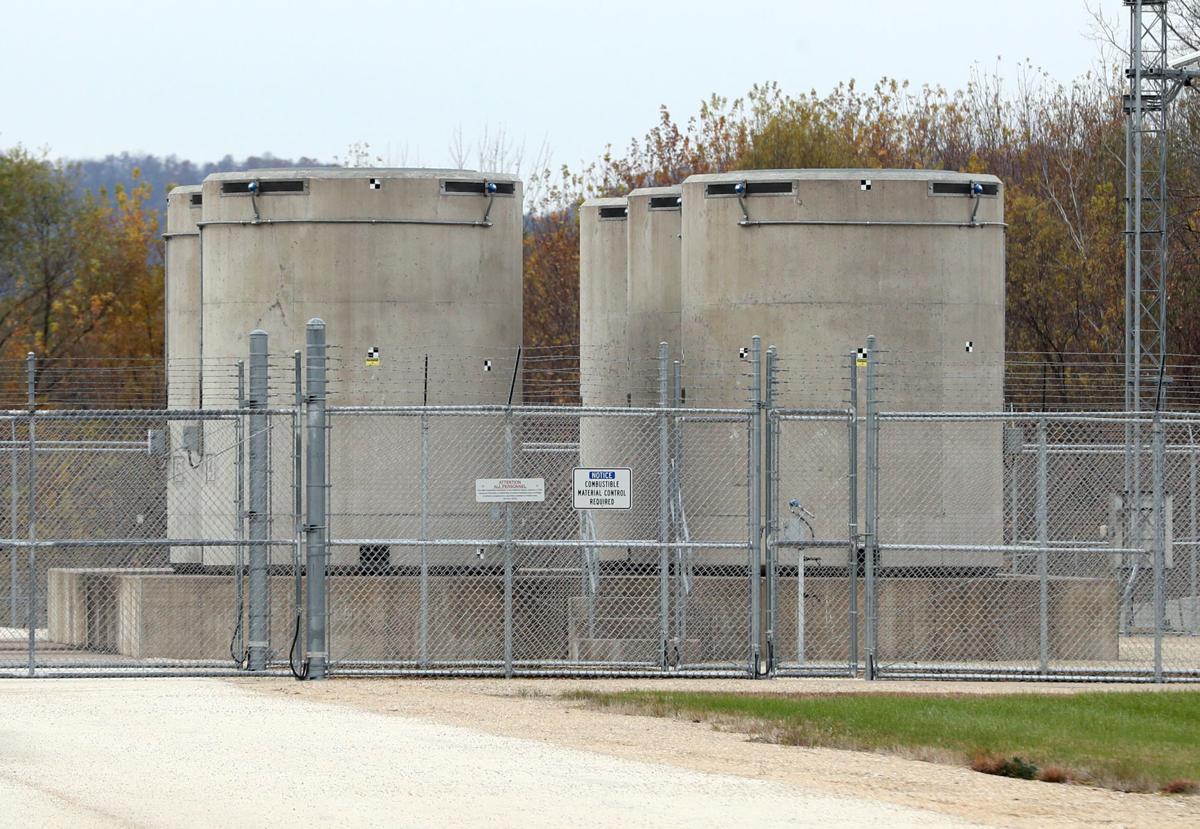 Dairyland Power spends about $3 million a year to guard and monitor five casks of fuel from the La Crosse Boiling Water Reactor.

President Donald Trump’s remark last week to a Nevada television station that he wouldn’t support development of the federal government’s politically embattled nuclear waste repository at Yucca Mountain may not have been his most noticed statement.

But it caught the attention of people like Brian Rude.

Rude is in charge of regulatory affairs for Dairyland Power Cooperative in La Crosse, which has been waiting more than two decades for the federal government to make good on its promise to take possession of 38 metric tons of nuclear waste that’s sitting on a concrete pad along the banks of the Mississippi River near Genoa.

The spent fuel is packed in steel and concrete containers that the Nuclear Regulatory Commission and industry experts consider the safest way to hold it, but the casks require round-the-clock security, periodic monitoring and mountains of paperwork.

Those costs add up to about $3 million a year for the utility, which provides electricity for about 250,000 customers in Wisconsin, Minnesota, Iowa and Illinois.

The five casks in Genoa are a tiny fraction of the radioactive waste sitting at 79 such temporary sites across the country, and U.S. taxpayers have shelled out nearly $7 billion in storage costs, even though utility customers have already paid for long-term storage.

And the claims continue to pile up, with the Department of Energy estimating it could ultimately be on the hook for more than $34 billion.

“The taxpayers are spending $2.2 million a day for government inaction,” said Rod McCullum, senior director of decommissioning and used fuel for the Nuclear Energy Institute, the nuclear industry lobbying organization.

That means customers of these nuclear plants are ultimately paying twice to manage the waste, said Katie Tubb, a policy analyst for the conservative Heritage Foundation.

“At the end of the day ratepayers pay for the management of waste, which is appropriate,” Tubb said. “The Department of Energy has done a marvelous job of making it a lot more expensive.”

Wisconsin hosts three spent-fuel storage sites, with another two on the border. There are half a dozen in northern Illinois, which has more nuclear power plants than any other state.

These sites, within 10 miles of more than 800,000 people, house hundreds of casks of radioactive waste waiting to be picked up.

Dominion Energy, which owns the shuttered Kewaunee Power Station near Green Bay, has received $13 million in settlements so far and has a pending case against the government for damages since 2013.

By the end of this year Xcel Energy estimates it will have collected more than $217 million in settlements for storing 74 casks of waste at plants near the Twin Cities and Red Wing, Minn.

Dairyland’s spent fuel is a remnant of the La Crosse Boiling Water Reactor, a small government-built plant that hasn’t generated a watt of electricity for more than three decades.

So far the government has paid $111 million in settlements to Dairyland, but Rude said that doesn’t cover all of the utility’s expenses.

“The problem … is we never get back all of the money we spend,” he said. “The costs continue to fall on our members. … The worst part of our situation is we can’t recover any of this by producing electricity.”

Situated on federal land about 90 miles northwest of Las Vegas, Yucca Mountain is a 1,200-foot-high volcanic ridge that Congress has designated as the sole site the Department of Energy could study for disposal of spent fuel and other high-level nuclear waste, which the government agreed in 1982 to take and store for commercial nuclear power companies.

But the 1998 deadline came and went, and under pressure from the state of Nevada, work stopped on the Yucca Mountain site.

And so, two decades later, U.S. utilities are sitting on about 80,000 metric tons of spent fuel, and the 99 operational commercial plants are expected to continue generating about 2,000 tons per year, according to the U.S. Government Accountability Office.

By 2050, the nation will have 134,000 metric tons of spent fuel, according to researchers at Sandia National Laboratories. That’s assuming no new nuclear reactors are built and no fuel is reprocessed, neither of which is likely to happen in the near future.

Under the contract, utilities paid the government $1 for every megawatt-hour of electricity generated with nuclear fuel, which added up to about $750 million a year. But in 2014, at the direction of the courts, the government stopped collecting the fees. There is currently about $38 billion sitting in the DOE’s nuclear waste fund.

Courts have ruled the nuclear waste funds can be used only to pay for disposal, so those payments to utilities come out of the Treasury, not the DOE budget.

“Taxpayers are left to cover the bill,” Tubb said.

There’s no consensus on the suitability of Yucca Mountain, and there are about 300 technical and political contentions that the Nuclear Regulatory Commission must address if it resumes the licensing process, which was suspended in 2011.

The NRC has estimated it will cost at least $330 million and up to five years just to complete the licensing process, though the agency has no estimates for the cost to operate it.

“Yucca Mountain is a perfectly good place to put it for hundreds of years,” said Clifford Singer, a retired professor of nuclear engineering and political science at the University of Illinois-Urbana-Champaign.

The problem is that it might need to last a million years.

“It really depends on what you think very distant future generations will want,” Singer said.

The Union of Concerned Scientists has not taken a position on the facility, though it contends the selection process was flawed and would like to see other sites evaluated alongside it.

“It was chosen through sheer political power, 49 states ganging up against one that was not as wealthy or populous as it is now,” said Edwin Lyman, a senior scientist with the organization’s global security program. “That doesn’t mean the site is not technically suitable.”

Given the lack of a permanent solution, scientists say dry cask storage is preferable to keeping spent fuel in cooling pools, where much of the nation’s used fuel is kept.

“All over the country we have pools that are essentially packed to the gills with wet fuel,” Lyman said. “If there were an accident or terrorist attack that result in draining of the pool you could have a zirconium fire. … The consequences of that fire could be huge.”

Casks are safer, Lyman said, but could still be vulnerable to terrorism and were not designed to last indefinitely.

“They’re not perfect,” he said. “Right now I don’t think anyone knows what the absolute lifetime of any of these packages is.”

There are proposals to develop consolidated interim storage facilities at sites in Texas and New Mexico, although those also face opposition. And if either is opened, industry watchers say it would take away pressure to develop a long-range solution.

“This is not a technology question,” Rude said. “It’s a political question.”

The nuclear power industry has seen Trump as an ally, and the president included money for Yucca Mountain in his 2018 and 2019 budget requests, although Congress zeroed out both requests.

“We appreciate the administration is very supportive of nuclear energy,” McCullum said.

But while in Nevada to campaign for Republican Sen. Dean Heller, Trump last week indicated that he opposes further development of Yucca Mountain.

“I think you should do things when people want them to happen, so I would be very inclined to be against it,” he told KRNV television in Elko. “And we will be looking at it very seriously over the next few weeks, and I agree with the people of Nevada.”

The White House did not respond to a request for clarification of his position or whether the president would favor an alternative solution.

Rude, a former Wisconsin state senator, views the statement as “a temporary political commitment” and believes the administration will once again push to resume the Yucca Mountain licensing process after the Nov. 6 election.

“We’re not surprised,” McCullum said. “We’re used to Yucca Mountain being an election issue in Nevada.”

In a pair of votes Monday, the Minnesota Public Utilities Commission boosted the prospects of a natural gas-fueled power plant in Superior, Wisconsin.

Securitas security guard Micah Buncak checks the locks of the fence containing the five casks filled with spent fuel from the La Crosse Boiling Water Reactor at the Dairyland Power plant in Genoa.

Dairyland Power spends about $3 million a year to guard and monitor five casks of fuel from the La Crosse Boiling Water Reactor. 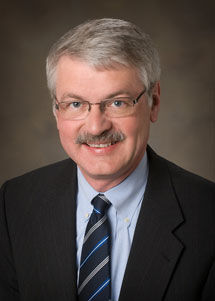