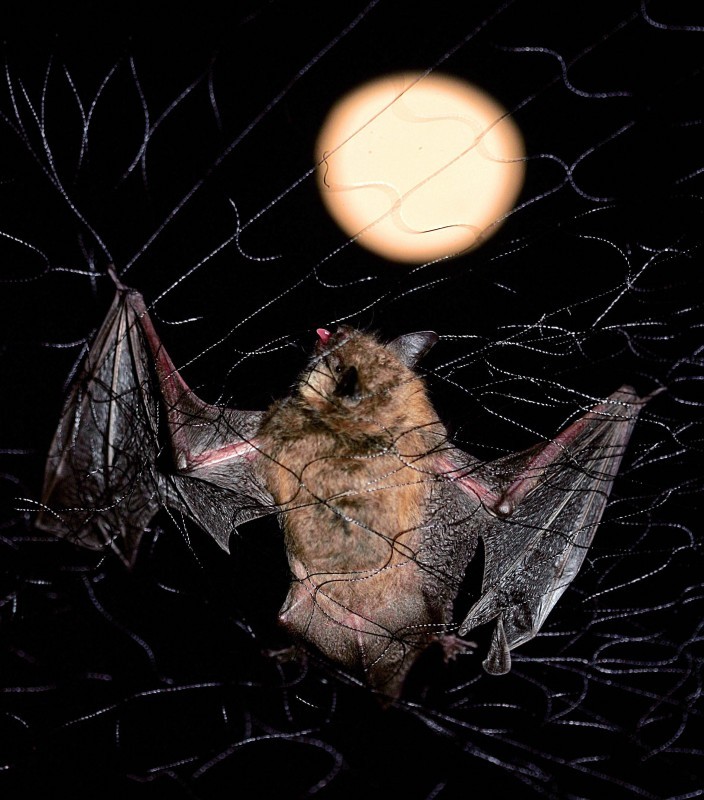 A bat is snared in a net by researchers hoping to understand more about the state’s bats and perhaps protect them from the threat of a disease called white-nose syndrome. 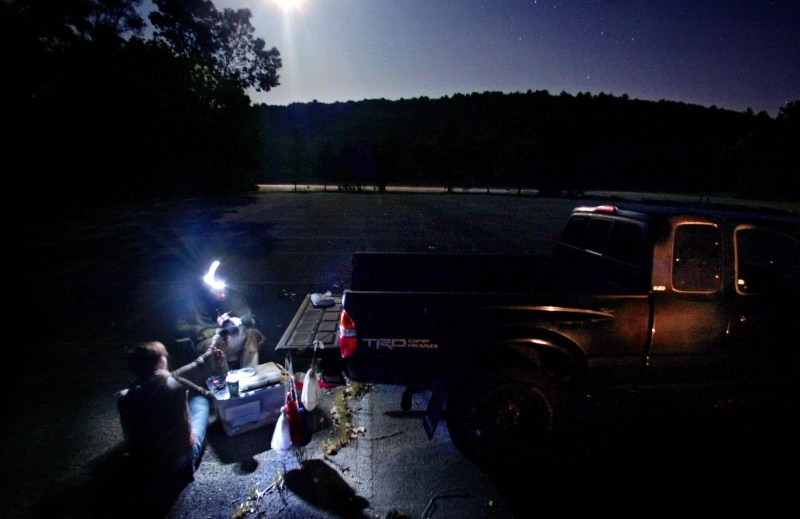 Cloth bags of captured bats hang from the tailgate of a pickup truck as researchers work in the dark to record information on each bat before returning them to the night sky. 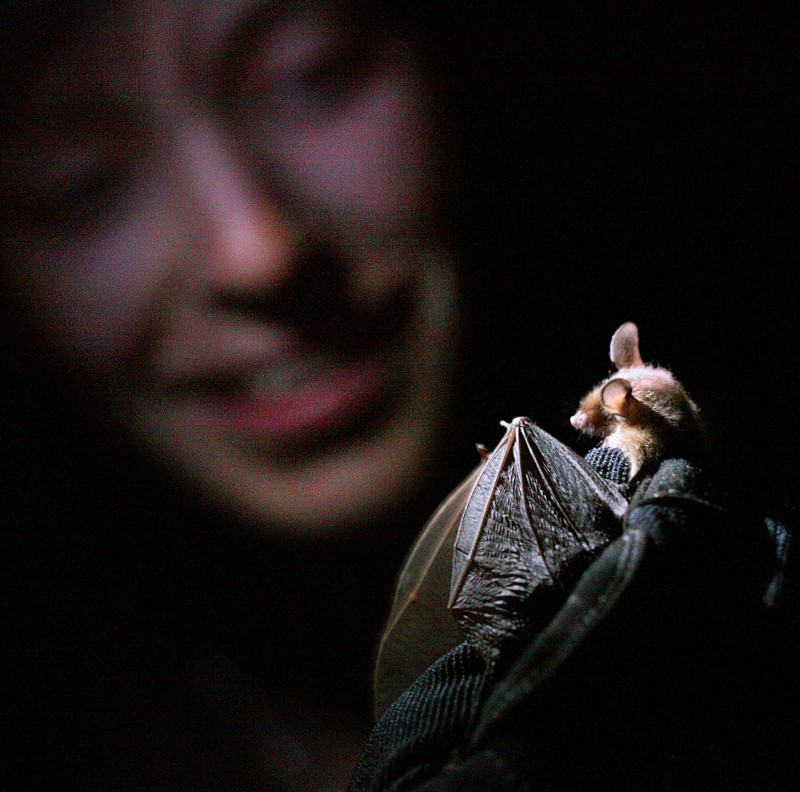 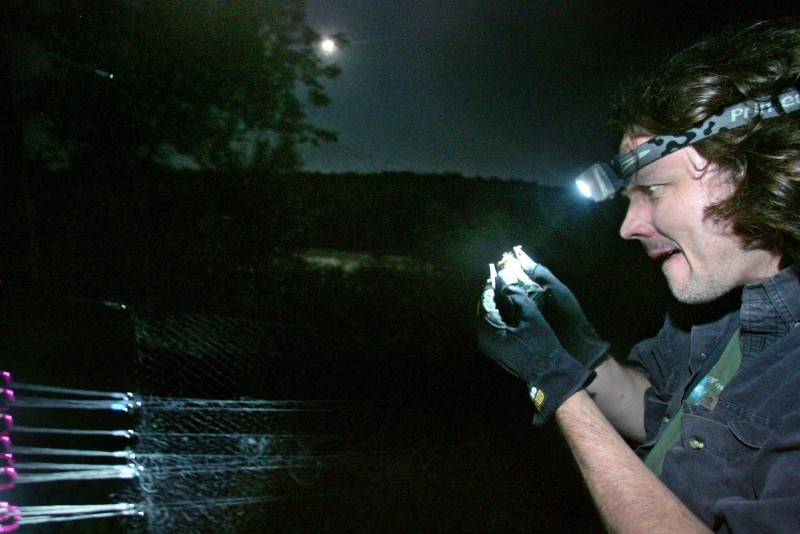 Dave Redell, a bat researcher with the state Department of Natural Resources, goes about his work these days with a heightened sense of urgency because of the threat of white-nose syndrome, which is killing bats by the thousands on the East Coast. 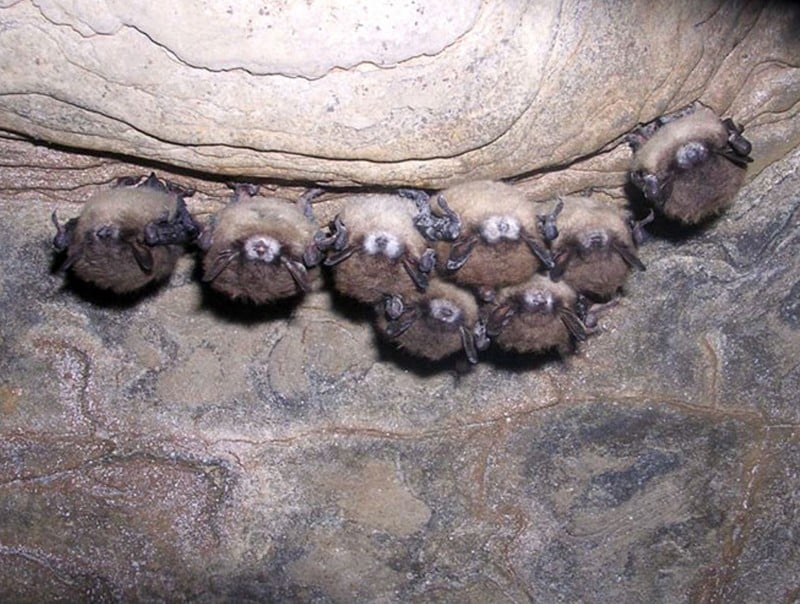 Brown bats afflicted with the fungus that is believed to cause white-nose syndrome hibernate in a cave in New York, where the disease has killed 90 percent of the state’s cave bats.
By RON SEELY 608-252-6131

DODGEVILLE - Bat researcher Dave Redell went to work trapping bats one night last week with the gloomy knowledge that, within two to three years, many of the animals caught in his nets could be dead.

Redell, who studies bats for the Department of Natural Resources, lives every day now with the threat of a disease called white-nose syndrome hanging over his head. The disease, though not yet in Wisconsin, has killed more than 90 percent of the cave bats in Eastern states such as New York and Vermont. Experts predict it could make its way to Wisconsin, with its eight species and hundreds of thousands of bats, in as little as two years.

"The next three years are the most important of my career," Redell said as he prepared to set up his nets. "You never think you are going to be faced with helping to save a species from extinction."

So Redell carries with him on his trapping expeditions not only his equipment - nets, headlamps, bags, gloves, scales and devices to record the clicking calls of the bats - but also a building sense of urgency.

The landscape on this night is washed in the pale light of a nearly full moon. The evening is still and calm, and Redell is confident that the bats will be flying in good numbers, swooping down from their roosts to its insect banquet.

Redell has had luck trapping bats in his mist nets here before. So he's hoping that the hills and wooded shadows of Governor Dodge State Park give up some bat species he still needs for his studies - tree bats, for example, or maybe even a hoary bat or two.

Redell, who has studied bats in the state for 12 years, turns somber as he pauses to talk about white-nose syndrome, a disease that has so many in the field utterly discouraged.

Researchers such as Redell are spending long hours in the field, trying to document and describe Wisconsin's bats, compiling information that may help in the battle against the disease. Others are hunched over microscopes in laboratories, including Madison's National Wildlife Health Center, racing to understand the fungus that causes white-nose.

At stake is the fate of a tiny, flying mammal that has an impact on the ecosystem far out of proportion to its diminutive size. One female little brown bat - with a body less than the length of your thumb - can eat its body weight in insects in one evening, Redell said. Such is the insect-hunting prowess of the bats that they are thought to save farmers billions of dollars in crop losses, according to Sheryl L. Ducummon, with Bat Conservation International.

In a recent scientific article on the ecological and economic importance of bats, Ducummon reported that, in one summer, the 150 bats in an average colony of big brown bats can conservatively eat 38,000 cucumber beetles, which attack corn and other farm crops. Damage from the beetle and their larvae cost corn farmers as much as $1 billion a year.

The loss of such an insect-eating force could be devastating, Redell said. The approximate 1 million bats that have already died of white-nose syndrome in the last three years on the East Coast would have eaten 700,000 tons of insects were they still hunting the night skies, he said.

Bats perform other important tasks, too. Several Western species serve crucial roles as pollinators for desert plants such as agave and as seed dispersers for dozens of species of cacti.

Still, for all of their usefulness, the loss of bats would be much more than just a matter of economics. They are remarkable creatures that cause even stoic scientists to marvel at their evolved skills.

Dave Blehert, a researcher at the National Wildlife Health Center in Madison, is studying the fungus that causes white-nose syndrome. And though he spends his days involved in highly detailed lab work, he doesn't lose sight of the animal that is the focus of his work.

"I mean, this is like a mouse that flies, but it has the predatory capabilities of a polar bear," Blehert said. "They are physically adapted to command the night sky. You're talking about a little thing with a body less than half the size of your thumb whose heartbeat can get up to 1,000 beats a minute when they are flying but that can slow when they are hibernating in the winter to 4 beats a minute. And they live 20 to 25 years!"

Blehert has no trouble staying motivated. And his work has yielded plenty.

Working with other scientists, he has identified the fungus that is killing bats as a new form of a common soil fungus in the genus Geomyces. The fungus, which normally is involved in the decay of organic matter, appears as white fuzz on bats' noses but, more importantly, grows on other exposed skin surfaces and the wings.

Damage to the wings is critical because it diminishes a bat's ability to fly and feed. The new fungus also flourishes in the colder temperatures that typify caves and is passed from bat to bat in the close confines of winter hibernation. Some caves, such as Neda Mine in Dodge County, can contain as many as 200,000 bats from an area as large as a thousand square miles, according to Redell.

Blehert is now working to better describe the fungus and pinpoint its origin. Some evidence, he said, points to the fungus being an invasive from Europe. That, plus the presence of the fungus in the soil, argues for heightened efforts to control visits to caves that serve as important hibernariums, the places where bats hibernate.

At Governor Dodge State Park, Redell busies himself with his nets. One large net is strung between poles that rise as high as a goalpost. The net has to be strung just right; too tight and the bats will bounce off like tennis balls and fly away into the gloaming.

Tonight, Redell will capture and gather data on more than 30 bats, including two northern long-eared bats - a species of concern in the state. He and the wildlife technicians working with him will gently hold the bats and record their sex, weight, health details and size before releasing them into the night. It all goes into a database that will tell us more about the creatures we may stand to lose.

Redell said that with the natural world so besieged by everything from invasives to climate change, wildlife biologists generally anticipate having to face such a crisis at some point in their careers.

"I just didn't think it would be this soon," Redell said.

Aflutter to save Wisconsin's bats

A mysterious disease is coming that may wipe them out.

Protections for Wisconsin's cave bats, threatened by a deadly disease that has wiped out some bat populations in the eastern United States, were approved Wednesday by the state Natural Resources Board.

Investigators at the National Wildlife Health Center in Madison said the birds likely died from collissions after becoming disoriented, possibly by illegal fireworks.

Little brown bat ( Myotis lucifugus ): Common throughout the state. Most frequently reside in attics and buildings. About as long as your thumb.

For a look at some of the myths that surround bats

For in-depth information about bats and bat conservation

A bat is snared in a net by researchers hoping to understand more about the state’s bats and perhaps protect them from the threat of a disease called white-nose syndrome.

Cloth bags of captured bats hang from the tailgate of a pickup truck as researchers work in the dark to record information on each bat before returning them to the night sky.

Dave Redell, a bat researcher with the state Department of Natural Resources, goes about his work these days with a heightened sense of urgency because of the threat of white-nose syndrome, which is killing bats by the thousands on the East Coast.

Brown bats afflicted with the fungus that is believed to cause white-nose syndrome hibernate in a cave in New York, where the disease has killed 90 percent of the state’s cave bats.
© Copyright 2021 Capital Newspapers Inc., madison.com , 1901 Fish Hatchery Rd Madison, WI | Terms of Use | Privacy Policy
Powered by BLOX Content Management System from TownNews.com.
You don't have any notifications.