The vehicle unveiled Saturday in UW-Madison’s Mechanical Engineering Building looks like it came straight from the pages of a science-fiction novel, but the team behind the project believes its pod is the next step in creating a new mode of transportation.

The pod was designed and built by Badgerloop — a team of more than 150 interdisciplinary students at UW working on the Hyperloop concept of transportation that would propel passenger and freight vehicles through a vacuum tube at hundreds of miles per hour.

“Transportation hasn’t really advanced in the past 50, 60 years,” Badgerloop president Zuf Wang said. “This is a mode of transportation we hope will open a new door to how we travel.”

This isn’t Badgerloop’s first foray into Hyperloop technology. The team participated in a competition at tech giant Elon Musk’s SpaceX headquarters in Southern California earlier this year and earned an innovation award for their first pod design.

The soft curves and smaller frame of Badgerloop’s second pod will help it in the specifications for the second round of competition at SpaceX. This pod was built for speed.

August’s test will be judged on which pod can reach the highest speed and come to a complete stop within the mile-long test track.

The first competition in January had more criteria for judges to rank, including safety, construction and operations performance.

Wang said reducing the judging criteria down to just two functions of the pod isn’t a step back in creating a fully-functioning Hyperloop pod. Instead, the teams making the pods can focus on fine-tuning technology that will meet the basic needs of Hyperloop transportation.

“Development doesn’t happen in one day,” Wang said. “Development happens in multiple stages, so competition two is more like a step towards (the goal).”

When the team arrives in Hawthorne, California, its pod will be highly scrutinized before being allowed into the Hyperloop test track, as will the other 23 pods designed by teams from around the world. At the first competition, only three of the more than 20 pods were tested inside the tube. Badgerloop’s was not one of them.

Once the pod is in the tube, an initial propulsion will be provided. After that propulsion, a tank of pressurized nitrogen is designed to push the Badgerloop pod to a projected top speed over 200 mph.

Going the fastest isn’t enough to earn a pod the top spot in the challenge, though — the pod must come to a complete stop before the finish line.

Although the terminology of the braking system is highly technical, it is actually a relatively simple design. The pod runs along a track through the tube, and specially made brake pads will squeeze the track to use friction to come to a stop, similar to how a car’s brake pads squeeze a wheel’s rotor.

But the Badgerloop pod’s brakes are far more powerful than what you’d find on an average sedan. Arjun Chaudhary, a mechanical engineering student, said that if the pod is traveling at 290 mph, the brakes would be able to bring the pod to a complete stop in just six seconds.

The pod for the competition in August was funded entirely by sponsors, Wang said, and cost around $70,000.

[Editor's note: This article has been updated to reflect a correction. The original version contained an incorrect title of the Hyperloop test track.]

UW-Madison students are taking part in a competition that could help bring Elon Musk's Hyperloop idea closer to reality. 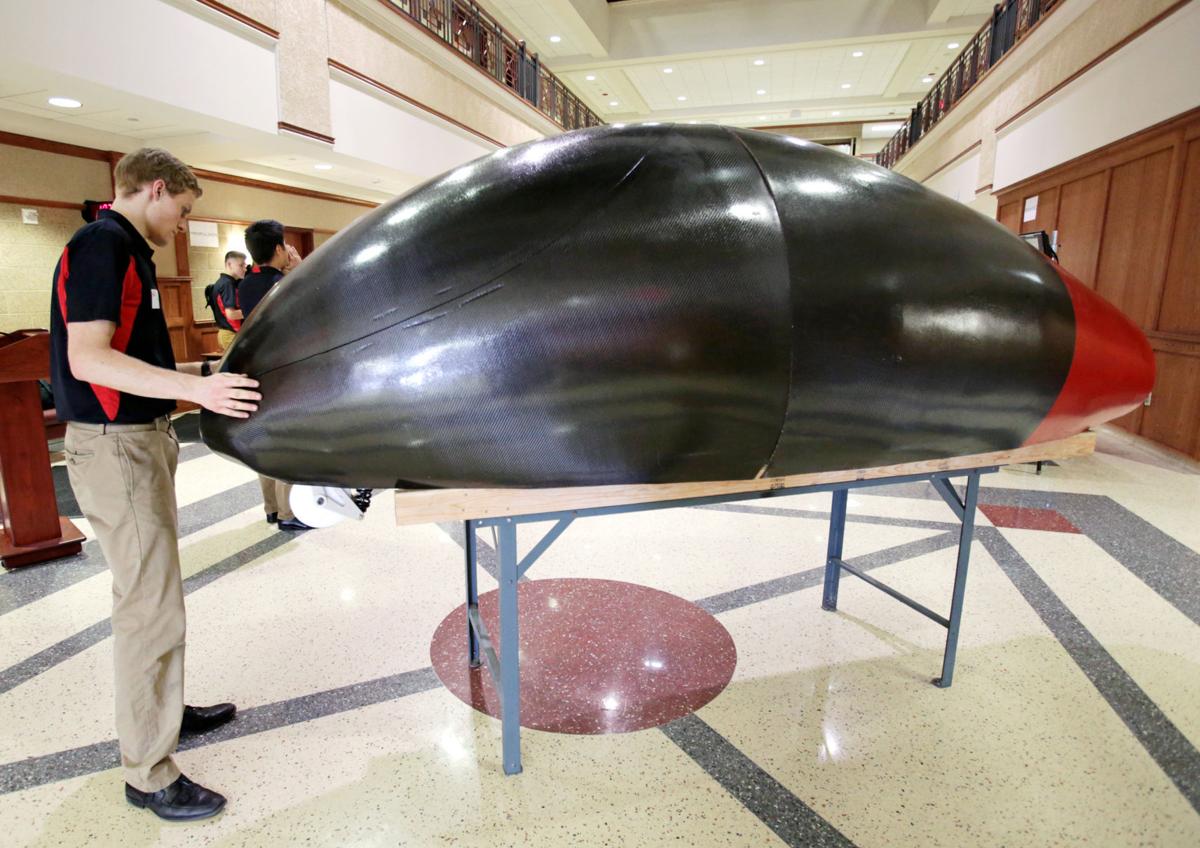 During an open house in the Mechanical Engineering Building at UW-Madison, Nathan Orf, composites lead for Badgerloop, shows off the group's latest pod that will compete in the SpaceX Hyperloop competition in August in California. 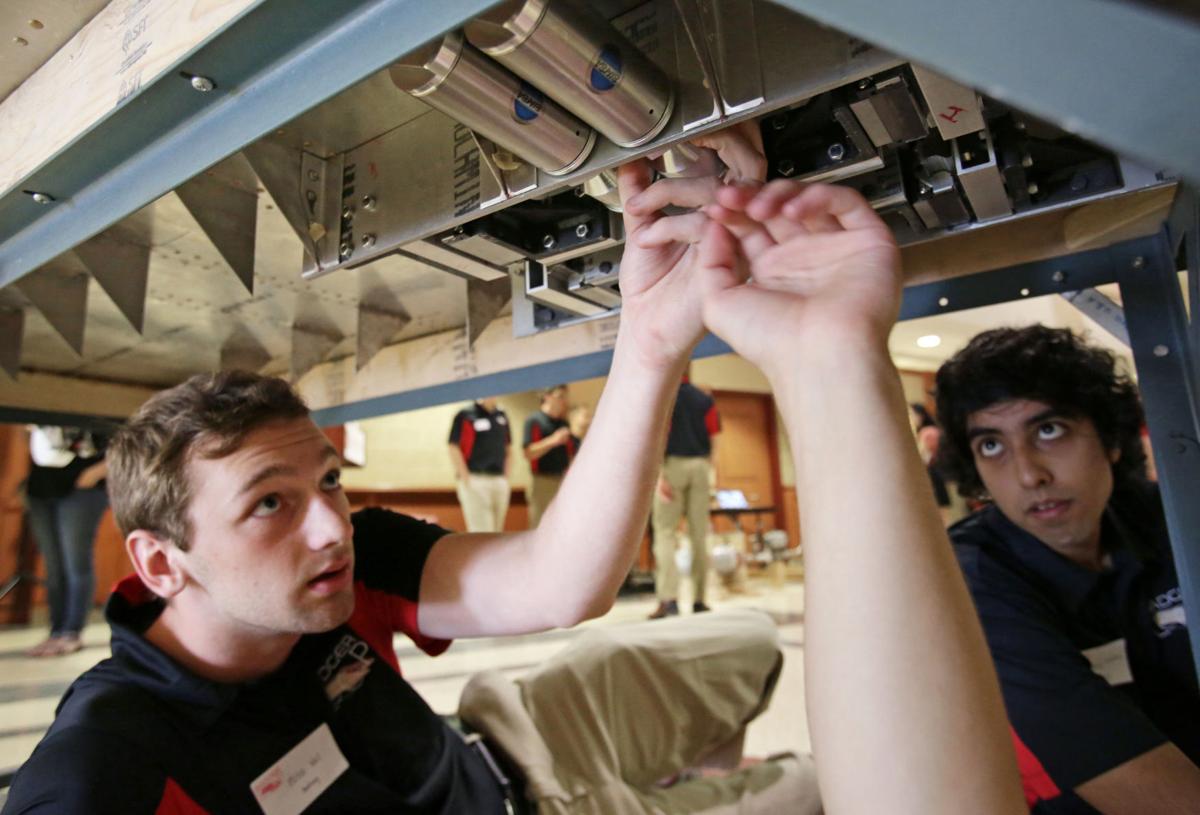 Mitch Wall, left, with Badgerloop, and Arjun Chaudhary work on the breaks of the team's latest pod. The brakes of the high-speed vehicle work similarly to those of a car. 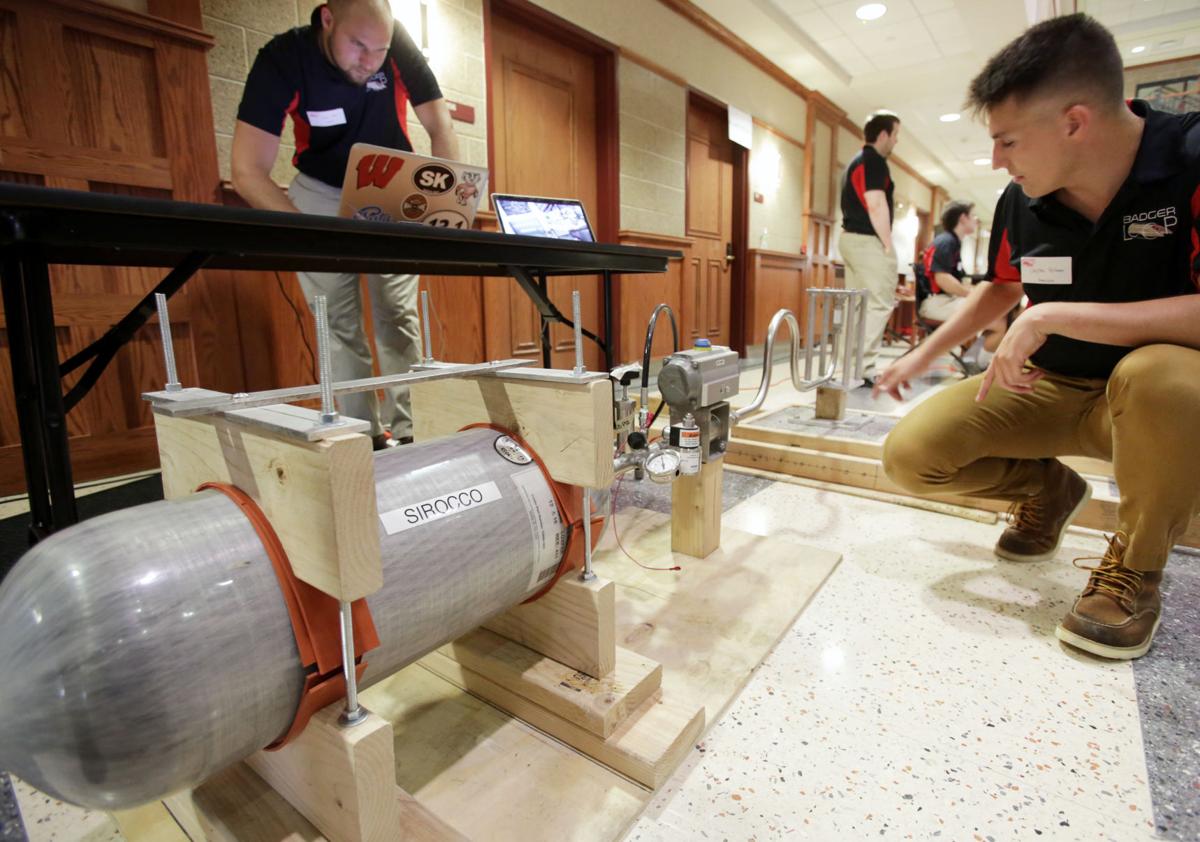 Claytn Fellman, propulsion leader with Badgerloop, talks about the test setup for a cold gas thruster used to propel the pod to speeds more than 200 mph.