A small but steady stream of masked UW-Madison students stopped by voter registration tables outside the unions on Wednesday to perform their civic duty. Madison City Clerk’s office employees helped them through the paperwork, sanitized their used pens and talked among themselves as they waited for the next students to filter into the fairly empty tents.

The vibe at Wisconsin’s largest university in this battleground state just 20 days out from the Nov. 3 election bore little resemblance to the campus atmosphere in the lead-up to the 2018 election when organizers passed out puppies, arranged celebrity visits, installed a bouncy house on Library Mall and wore costumes drawing attention to voter registration tables.

The barrage of activities and outreach two years ago paid off. Census data show turnout among voters ages 18-24 in this state nearly doubled from the previous two midterm elections.

But COVID-19 threatens that momentum and complicates an already confusing process for those newly eligible to cast ballots.

For example, National Voter Registration Day fell this year on Sept. 22, a day when two of UW-Madison’s largest dorms were under quarantine, nearly 500 infected students were sequestered in isolation housing and few others had reason to come to campus because all classes had temporarily moved online.

“Without having that face-to-face contact to show them what they need, it’s a lot harder to describe the (registration) process to a student over the phone,” UW-Madison College Democrats press secretary Allyson Fergot said.

The number of young adults casting ballots can have huge electoral consequences, especially for Democrats. Polls show young voters are less likely to identify with a political party but more likely to identify as liberal or progressive.

CIRCLE, a nonpartisan research center at Tufts University, identified Wisconsin as the top state where youth turnout has the highest potential to influence the outcome of the presidential election.

The cascading crises of this year — a pandemic that has claimed more than 215,000 lives, a racial justice movement spanning coast to coast and a shaken economy that may linger on past students’ graduations — are major motivators driving college students like UW-Madison junior Emily Knauss to the polls.

Knauss, of Illinois, considered herself to be politically engaged before 2020 arrived. The events of the past year, however, pushed her to navigate through the obstacles out-of-state students face in registering to vote as a Wisconsin resident, where she said her vote would have more weight. She successfully signed up on Wednesday and plans to vote early and in-person.

College students can have a huge effect in a tight race in swing states. Donald Trump won Wisconsin by 22,748 votes. UW-Madison’s student population is double that.

It’s why groups like NextGen America sunk millions into Wisconsin in the 2018 midterm.

The liberal youth turnout organization founded by former Democratic presidential candidate Tom Steyer planned to follow the same playbook in this election, but shut down in-person events back in March. The 36 paid staff members working across 19 of the state’s college campuses continue to promote voter registration and absentee ballots online.

The group’s goal of making voting fun — or “apeeling” as a sign on an organizer’s banana suit said in 2018 — is still vibrant in its remote get-out-the-vote operation, NextGen organizer Kade Walker said. The group held hot-sauce challenges and staff cook-offs on social media, then dovetailed into discussions on voting.

Walker worked for NextGen on UW-La Crosse’s campus two years ago and now works as the group’s press secretary for the entire state, giving him a unique vantage point to compare young voter enthusiasm between two very different election seasons.

“We’re having so many more conversations because it’s so easy to do things online,” he said. “The energy that young people have is even greater than in 2018. They’re getting active. They’re voting earlier.”

Students are also more concerned about the process and making sure their ballot counts, Walker said, which he attributed to the state’s spring election and accompanying host of problems, both in-person and by mail.

Top concerns Walker and other NextGen organizers hear about from college students are the coronavirus, climate change, racial justice and student debt.

“I can’t stress how much energy we’ve seen,” he said. “It’s easy to get pessimistic about what’s going on in the world right now but young people have really led right now. More and more young people realizing how much power their vote has.”

Like many other colleges, UW-Madison is helping ease students’ path to the ballot box. A concerted effort run by the university’s Morgridge Center for Public Service aims to increase voter participation among students, who are part of an age group that turns out to vote at a lower rate than any other.

The university’s nonpartisan voter education initiative, the Badger Votes Coalition, moved its efforts online this year. Traditional “Rock the Vote” events transitioned to “Zoom the Vote” videos where students can learn about voter registration, absentee ballots and how to work as a poll worker.

“We’re just trying to encourage people to participate in the election in the safest way possible,” Kathy Cramer, a UW-Madison political science professor and co-chair of the coalition, said. “There’s nothing that compensates for good old-fashioned eye-to-eye contact. But there’s a lot of alternative communication that’s going on.”

Cramer credits student interns for creating podcasts, videos, and other content to reach students through social media and promote absentee and early voting.

New this year is an interactive voting tool that asks students a series of questions, such as their residency status and whether they want to vote with their campus address or home address, to help them through the registration and voting process.

“There’s definitely an understanding that their vote matters,” said Fergot, of the College Democrats. “Especially being in Wisconsin, which people say is the tipping point in this election, young people are really understanding of the weight of their vote.”

The presidential election isn't the only contest on the Nov. 3 ballot. Find out more about congressional and legislative races in south central Wisconsin.

A four-term Democratic incumbent (I) faces a Republican challenger.

A 12th-term Democratic incumbent (I) faces a Republican challenger in the 3rd Congressional District in the Nov. 3 election.

U.S. Rep. Jim Sensenbrenner, a Republican who has held the seat since 1979, is retiring.

A three-term Republican incumbent (I) faces a challenge from a Democratic former state senator.

Democrat Joni Anderson and Republican Joan Ballweg are facing off for the 14th Senate District seat.

Two candidates are vying to represent the 16th Senate District, which covers parts of Madison's North and East sides, as well as Monona, Fitchburg, Stoughton and Sun Prairie.

A Walworth resident is challenging the incumbent (I) for the seat representing the 31st Assembly District in the Nov. 3 election. The term is for two years.

A business owner is challenging the incumbent (I) for the seat representing the 33rd Assembly District in the Nov. 3 election. The term is for two years.

A first-term incumbent (I) Republican faces a Democratic challenger in the race to represent Wisconsin residents in the 38th Assembly District.

A four-term Republican incumbent (I) faces a Democratic challenger in a district that covers Beaver Dam and the eastern half of Dodge County in the Nov. 3 election.

An aide for a Republican U.S. congressman and a Ripon School Board member are vying in the Nov. 3 race for the state Assembly’s 41st District.

A Republican incumbent (I) serving his first full term after winning a June 2018 special election faces a Democratic challenger in the Nov. 3 election.

A Town of Milton board supervisor and daycare owner is challenging a Democratic incumbent (I) in the race to represent the Assembly's 43rd district in the Nov. 3 election. The term is for two years.

Two Janesville City Council members are squaring off in a contest to fill the seat vacated by incumbent Democrat Deb Kolste, who is not running for a fifth term.

A political newcomer is challenging a three-term incumbent in Wisconsin's 45th Assembly District, which includes parts of Green and Rock counties on the Illinois border.

An eight-term Democratic incumbent (I) faces a Republican challenger in a district that covers Sun Prairie, Cottage Grove and Stoughton.

A Republican who has run for statewide office as a Libertarian is challenging a two-term Democratic incumbent (I) in the Nov. 3 election.

Two candidates are vying to represent the 48th Assembly District, which covers the East and North sides of Madison and the village of Maple Bluff, in the Nov. 3 election.

A five-term Republican incumbent (I) faces a Democratic challenger in a district that covers the southwest corner of the state in the Nov. 3 election. The term is for two years.

A first-term Republican incumbent faces a Democratic challenger in an area northwest of the Wisconsin Dells that includes Mauston and Reedsburg.

A restaurant owner who won a crowded Democratic primary in August faces a Republican college senior in the race to represent Madison's Isthmus and East Side in the Nov. 3 election. The term is for two years.

A four-term Democratic incumbent (I) faces a Republican challenger in the Nov. 3 election for an Assembly seat that covers parts of the Far West Side of Madison, Cross Plains, Middleton, Verona and Waunakee.

A nine-term Democratic incumbent (I) faces a Republican challenger in the Nov. 3 election in a district that spans parts of Iowa, Dane and Green counties southwest of Madison.

The district is centered around Devil's Lake State Park and includes parts of Iowa, Dane, Columbia and Sauk counties.

The window to vote early and in-person will remain open for 11 days, until Nov. 1. 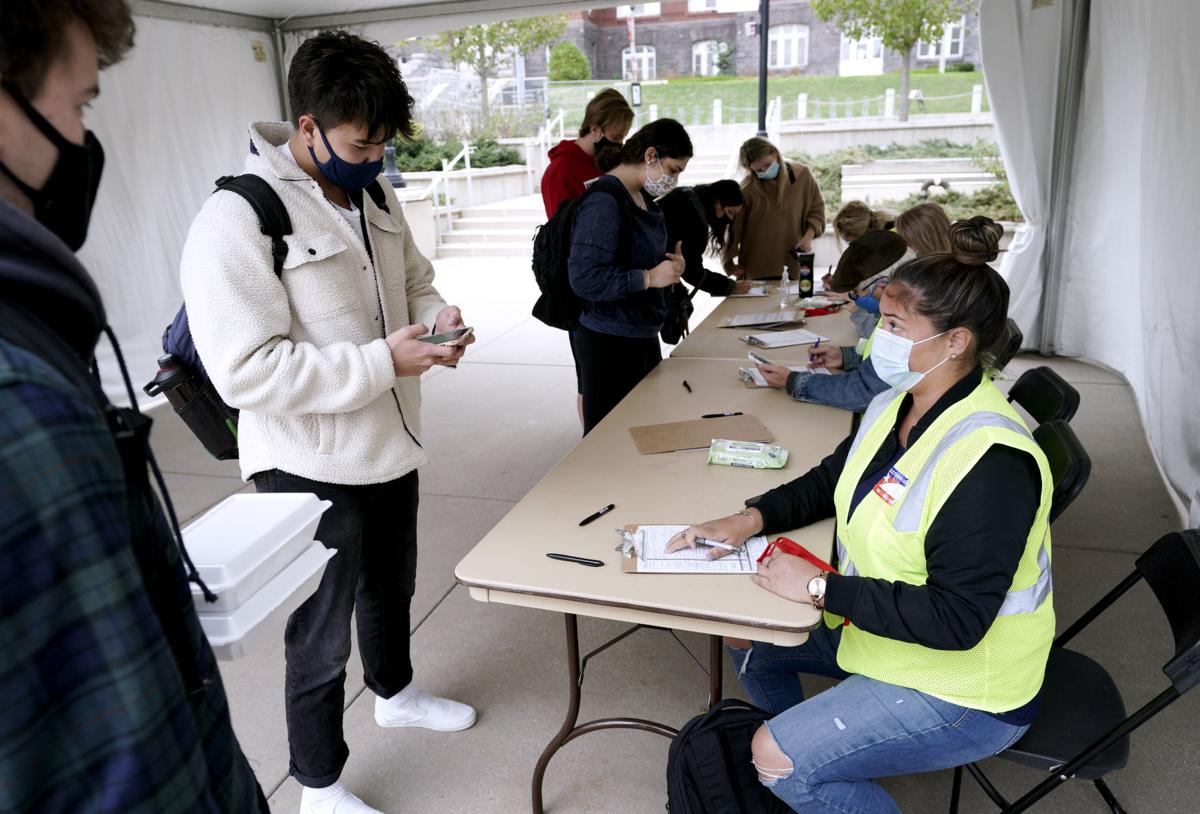 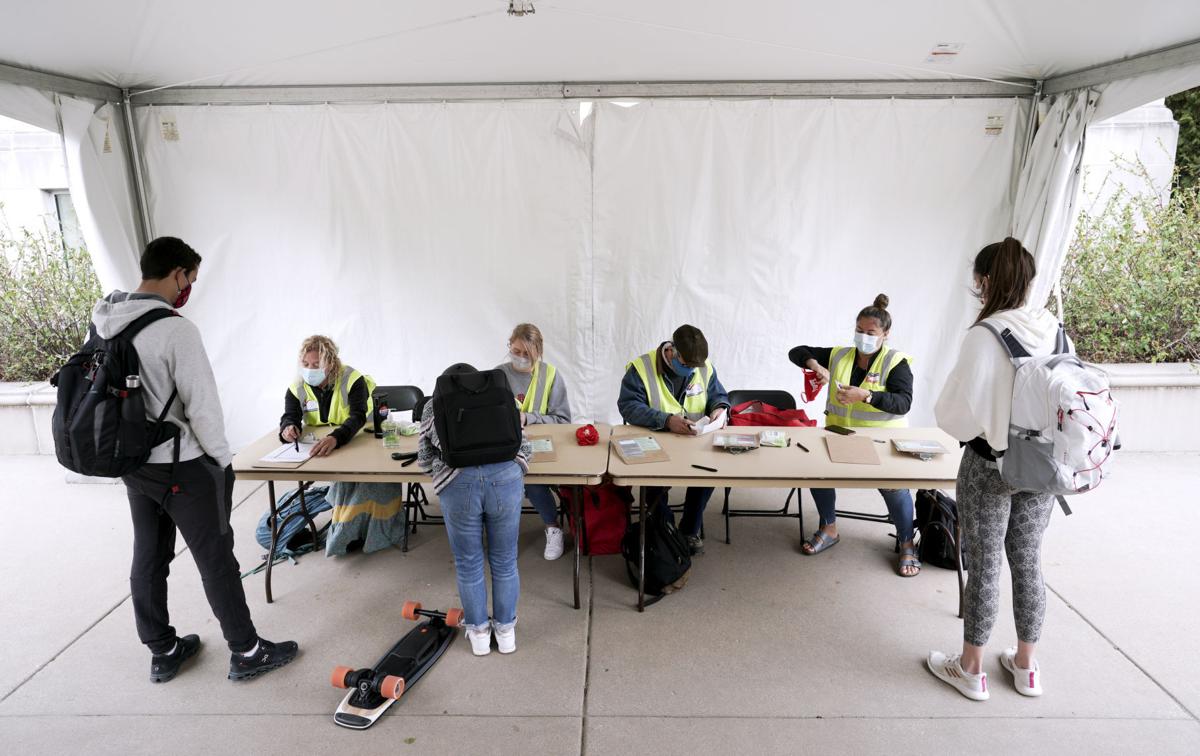 Madison City Clerk's office employees held several voter registration events since the start of the UW-Madison semester. Sophomore Jack Henderson signed up after his absentee ballot back home in Minnesota did not arrive. 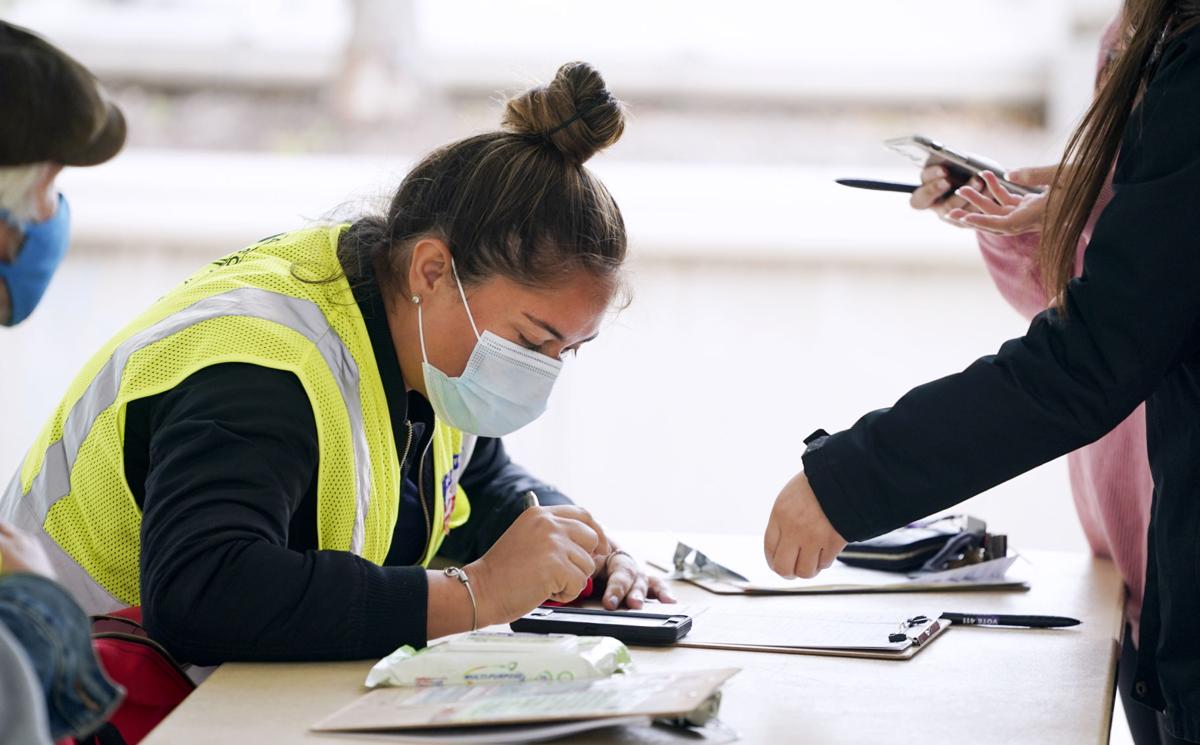 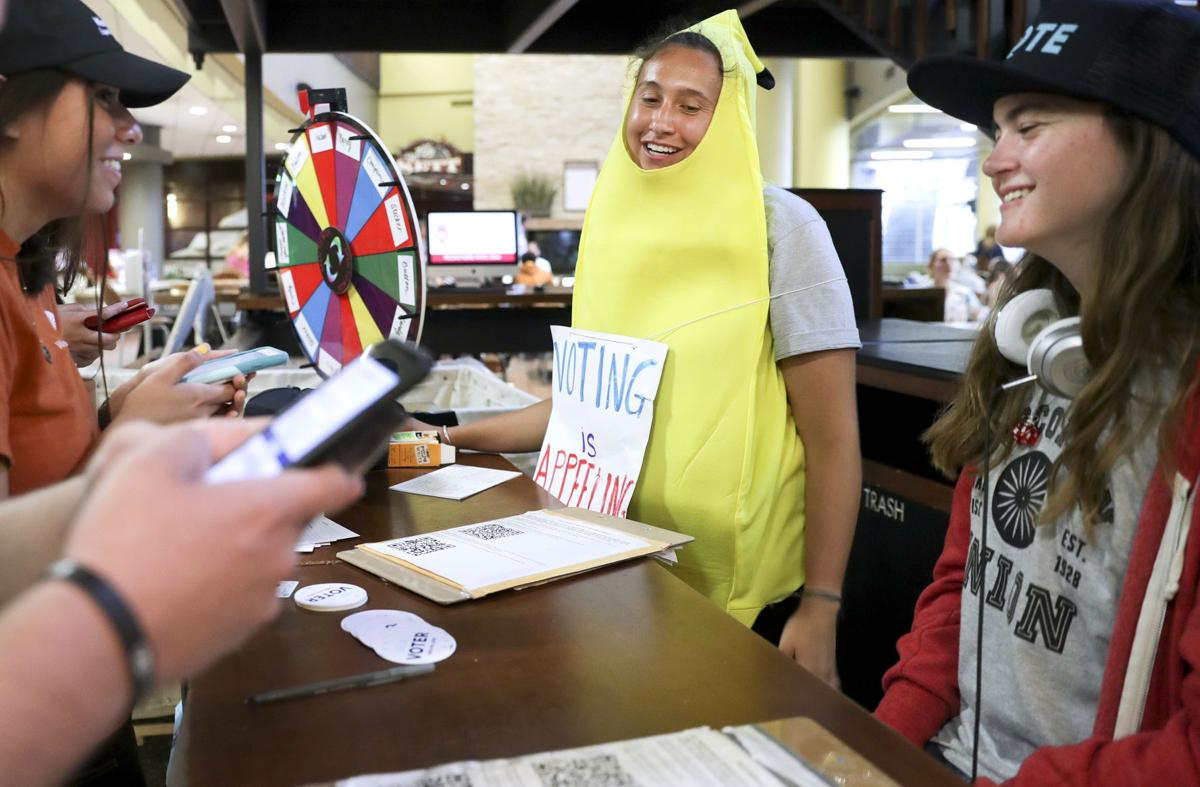 NextGen America organizer Maia Berlow wore a banana suit on National Voter Registration Day in 2018 while working a voter registration table on UW-Madison's campus. Much of voter outreach is taking place online this year because of COVID-19. 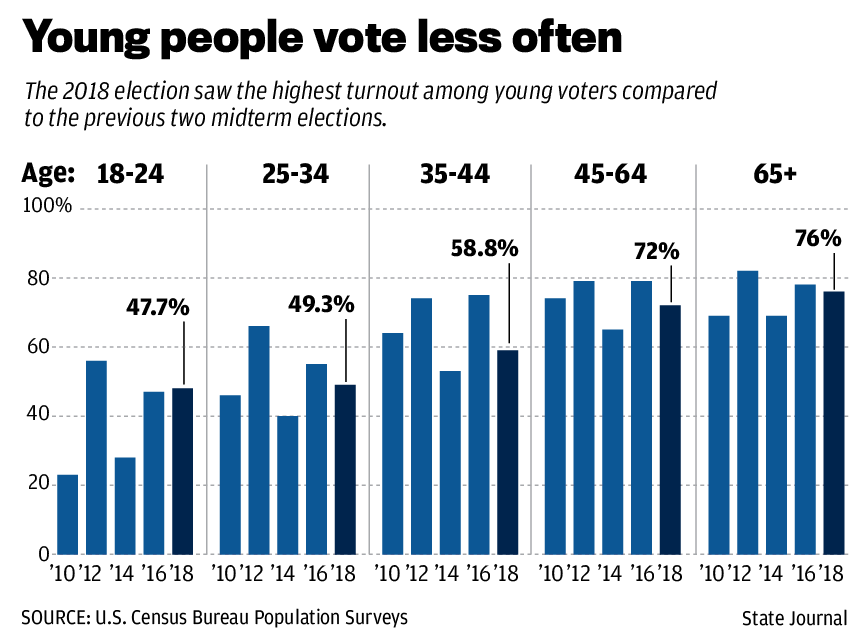