Beverly Kopper will resign as UW-Whitewater chancellor effective Dec. 31 after allegations that her husband sexually harassed female staff members sparked calls for her ouster this past fall.

The University of Wisconsin System will continue to pay Kopper her $242,760 annual salary during an eight-month paid leave, and she can then return to a faculty position at a reduced salary, according to records obtained by the Wisconsin State Journal.

Kopper announced the resignation Monday in a campuswide email that touted a record year of fundraising, a record-high faculty retention rate and pride in university members’ accomplishments, but left unaddressed the scandal that has engulfed her chancellorship over the past several months.

“Serving as your chancellor has been an honor and a privilege,” she wrote. “I have devoted my life to teaching and learning and making a difference. That will never change.”

Kopper submitted a one-sentence letter of resignation to UW System President Ray Cross on Dec. 6; he accepted it Monday. Kopper wrote that she was aware the UW System’s Board of Regents “would like different leadership for UW-Whitewater.” 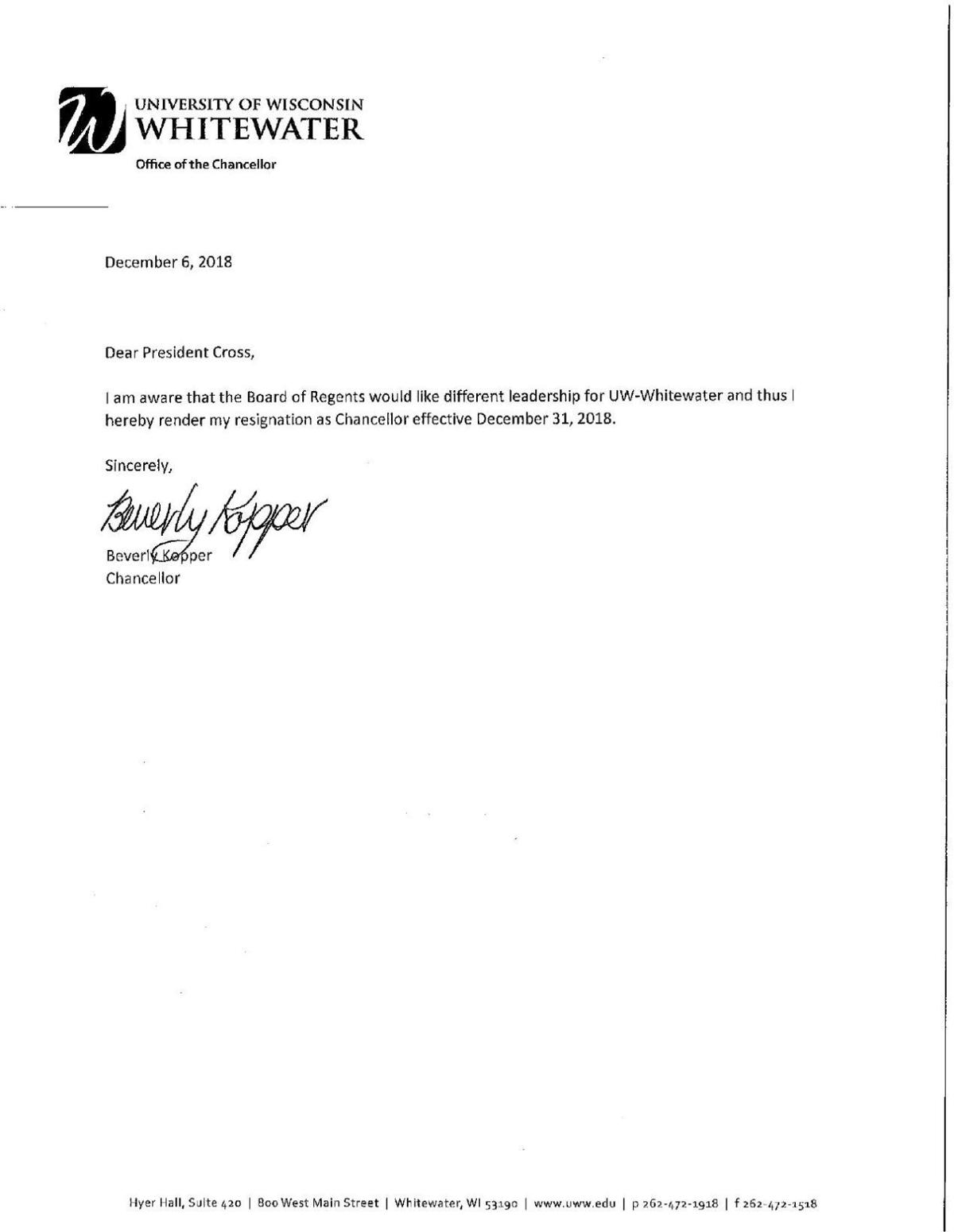 Kopper did not attend the university’s commencement ceremony over the weekend, according to System spokeswoman Heather LaRoi. Instead, UW-Whitewater Provost Susan Elrod presided over the graduation.

The System will name an interim chancellor while a formal search is conducted, LaRoi said.

Over the summer, Kopper’s husband, Alan “Pete” Hill, was banned from campus and stripped of his honorary title as an unpaid associate to the chancellor after a UW System investigation found “merit” to allegations that he sexually harassed female employees. The news was first reported by the Milwaukee Journal Sentinel.

The allegations from those women included a hug that lasted “too long,” Hill leaning into a woman for a kiss on the mouth and, most recently, Hill squeezing a woman’s knee under a table no fewer than three times.

Hill denied any wrongdoing, according to 44 pages of records released by the System in September.

The women told investigators they did not report the harassment out of fear of retaliation, raising concerns about the type of work environment Kopper fostered.

A UW-Whitewater spokeswoman said in mid-September that Kopper had no intention of resigning.

But days after Hill’s banning was made public, more women, including a Whitewater City Council member, came forward with allegations of sexual harassment, prompting the System to open another investigation.

That investigation wrapped up last week, according to System officials. The internal report will be released publicly after a legal review.

Both the councilwoman and a Republican state senator whose district includes Whitewater called for Kopper’s resignation last fall.

The councilwoman, Stephanie Vander Pas, suggested Kopper shares some of the blame for exposing students to her husband’s alleged actions. She described an incident in which Hill’s hand allegedly slid up her skirt.

“I do believe I know the content of my husband’s character — and I believe you do, too,” she wrote in a Facebook post that has since been deleted. “I believe you know and understand who he is and what he’s done.”

State Sen. Steve Nass also called for the chancellor’s resignation, citing a letter Kopper wrote to System investigators questioning “certain statement of facts and interpretations” made in the report, which he said contradicts her public statements of fully cooperating with the System’s investigation.

Nass, one of the UW System’s most vocal critics and vice chairman of the Senate Committee on Universities and Technical Colleges, also cited broader leadership concerns he said he had heard from constituents about Kopper’s management style and budgetary oversight.

“While today’s resignation opens the door for positive change at UW-Whitewater, none of us should forget the healing that continues for the students and employees negatively impacted by the alleged conduct of Mr. Hill and the failure of top level administrators to prevent these circumstances,” Nass said in a statement.

According to Kopper’s contract, she holds a concurrent tenured position as a psychology professor that she can return to in 2019-20.

Kopper’s salary will be reduced from $242,760 to $118,308 in September 2019, according to a letter Cross sent to the chancellor Dec. 6 outlining her new employment conditions. Those conditions also stipulate:

Nass’ office said the senator was “outraged” by the agreement.

“This insult to the students, faculty and taxpayers can’t be allowed to stand,” Nass said in a statement released Monday night. “As we face the increasing possibility of a recession next year, there will be taxpayers that may lose their jobs in 2019 but be expected to pay taxes and tuition for their kids to finance a former chancellor doing almost nothing for eight months.”

Kopper’s tenure at the southeastern Wisconsin campus of about 12,000 students began in 2015. She previously served as the university’s provost.

UW-Whitewater chancellor put on paid leave because of unspecified complaint

The university's provost is leading UW-Whitewater pending the outcome of an investigation. Classes started Wednesday.

UW-Whitewater chancellor returns after complaint found to be 'without merit'

Sexual misconduct allegations made against UW-Whitewater Chancellor Dwight Watson during a stint at an Iowa university were found to be without merit, according to the UW System.