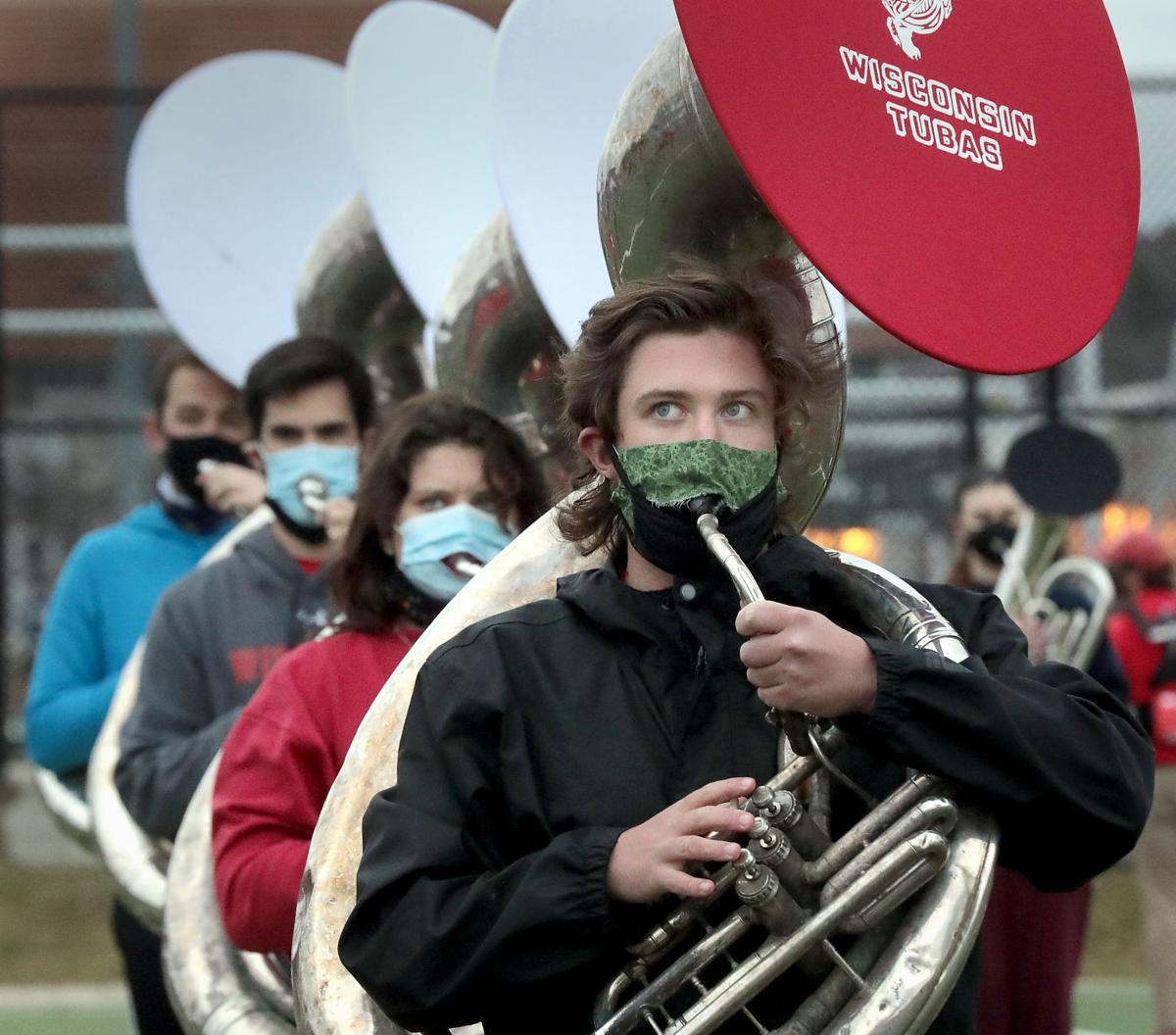 Members of the UW Varsity Band gather Wednesday for their first large group practice in more than a year. 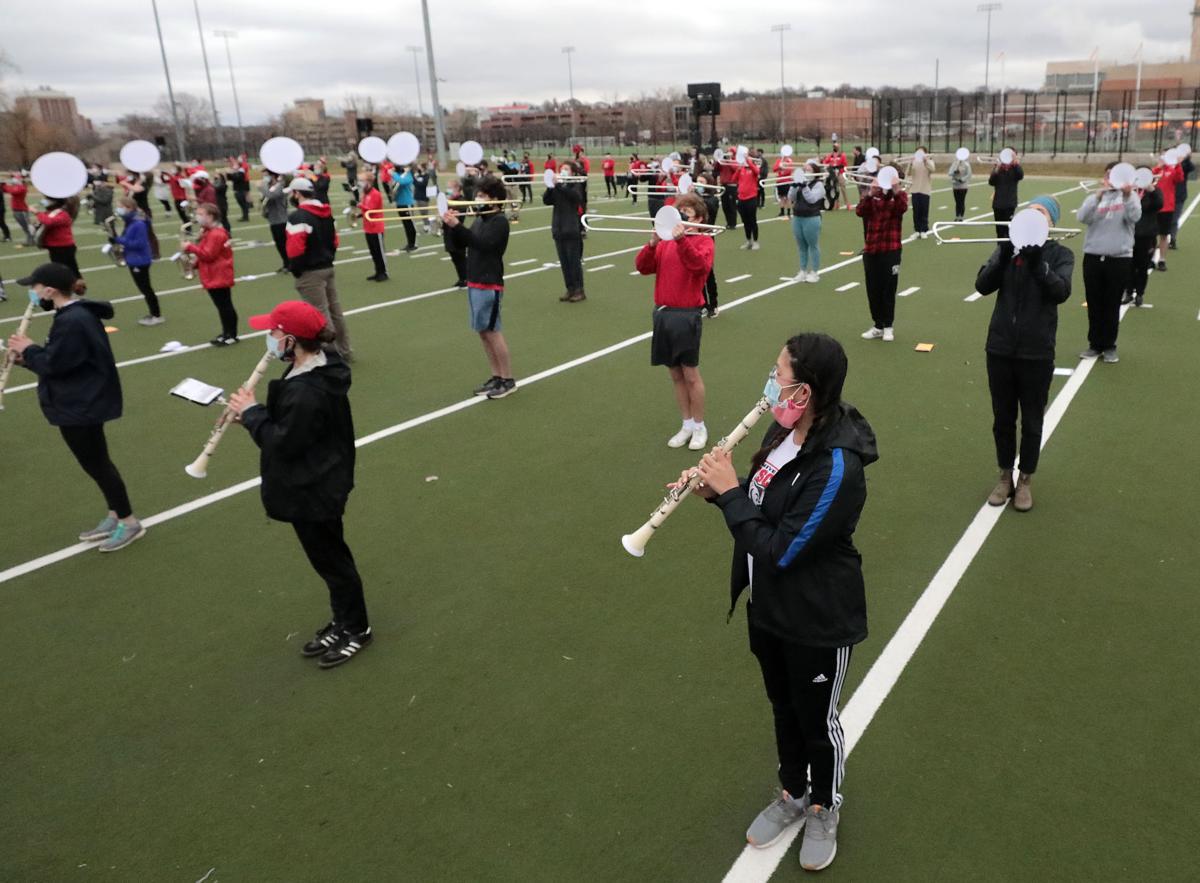 There’s no spring concert on this year’s calendar, and practice maybe looked a little funny, with students wearing slitted masks and bell covers slipped over instruments to prevent the spread of COVID-19, but UW-Madison’s beloved band is back.

Sights and sounds of pre-pandemic times are slowly returning to UW-Madison as campus gradually claws its way out of the coronavirus era. The UW Varsity Band’s large group practice on Wednesday, the first in more than a year, is the latest and most visible example of an inching toward normalcy.

“Hearing those first few notes coming out of everybody’s mouthpieces just gave me the chills,” UW-Madison senior and drum major Josh Richlen said. “It’s been a long time coming, so this is a good day.”

Officials updated the university’s events policy earlier this month, allowing up to 50 people to gather indoors and up to 150 people outdoors. The revision cleared the way for the band to begin practicing together again after months of being restricted to groups of 25 students, each of whom played the same instrument.

Shortly before practice began, Elizabeth Morrison, a trumpet-playing senior, said she looked forward to finally hearing the beat of the drums. She said band members had been pushing to play together again since the spring semester began in January, and they waited for the weather to warm up so practice could safely take place outside.

While both the campus and community are seeing declining numbers of COVID-19 cases, the virus is far from eradicated. About 20% of Dane County is fully vaccinated. Roughly 10,500 UW-Madison students and staff on the 65,000-person campus have received at least one vaccine dose. Masks are still a must, and 82% of classes are fully online this semester.

There are other signs of hope on the horizon beyond catching a couple measures of “On Wisconsin” and “Varsity.”

Fully vaccinated students and staff are now exempt from campus testing requirements. The International Division is accepting applications for some fall study abroad programs with a decision on all programs beginning July 1 or later to be made by May 15. Pre-college summer programming is still expected to be offered remotely, though officials said Tuesday there may be some exceptions, such as incoming freshman orientation and the UW Extension’s off-campus youth programming.

The semester looked shakier last month when a concerning uptick in campus cases prompted officials to warn students that another lockdown could be coming. Cases dropped over the next few weeks, and UW-Madison has reported a weekly average positivity rate of 0.1% for most of March.

Since a new saliva-based testing program launched Jan. 11, UW-Madison has reported 1,741 cases on and off campus, a fraction of the 7,400 cases identified since the data dashboard launched last August. The university has administered nearly 370,000 of the saliva-based tests, which represents roughly 70% of the 530,000 tests administered since August.

The University of Wisconsin System set a goal for at least 75% of classes to be delivered face-to-face or in a hybrid format next semester. And the UW athletic department started selling tickets for fans to attend football games this fall.

It’s an encouraging sign for Corey Pompey, who took over as band director in the summer of 2019. He led the group at the 2020 Rose Bowl, but plans for his first spring concert halted when COVID-19 hit.

“It has been tough,” he said through two masks. “We are almost Zoom-ed out at this point.”

Teaching music classes online has been “an adventure” for Pompey. He’s optimistic that the end of the pandemic is in sight but it depends on students remaining vigilant.

Guests can watch a livestream of the ceremony.

Some old, some new and some Beyonce: New era for UW Marching Band begins

"I had to come to grips with the fact that I would be following Mike Leckrone. And that took me a while," UW Marching Band director Corey Pompey said.

Rain, snow, freezing rain, and possibly some sleet all could fall on south-central and southeastern Wisconsin overnight, according to forecasters.

The couple started playing from the front porch of their Near East Side home a year ago this week.

Members of the UW Varsity Band gather Wednesday for their first large group practice in more than a year. 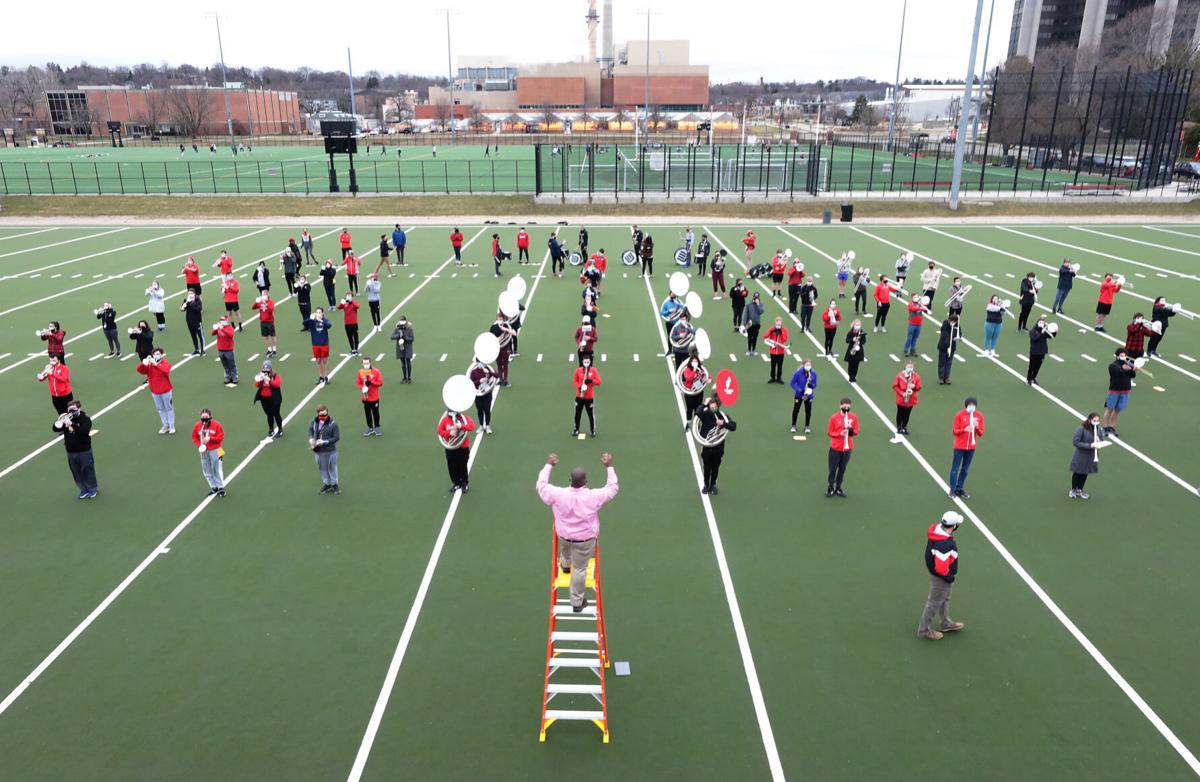 Under the direction of UW Varsity Band director Corey Pompey, members of the band practice Wednesday. 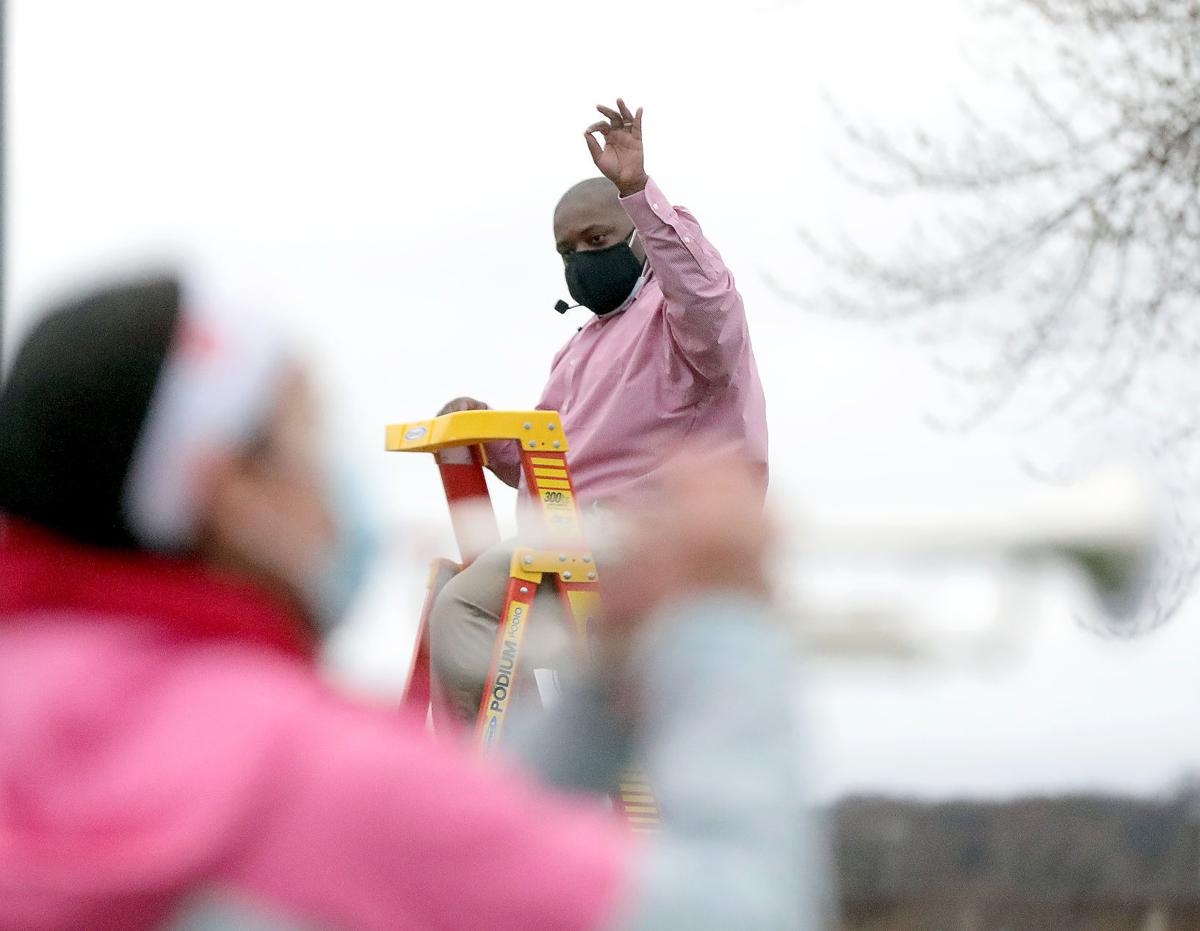 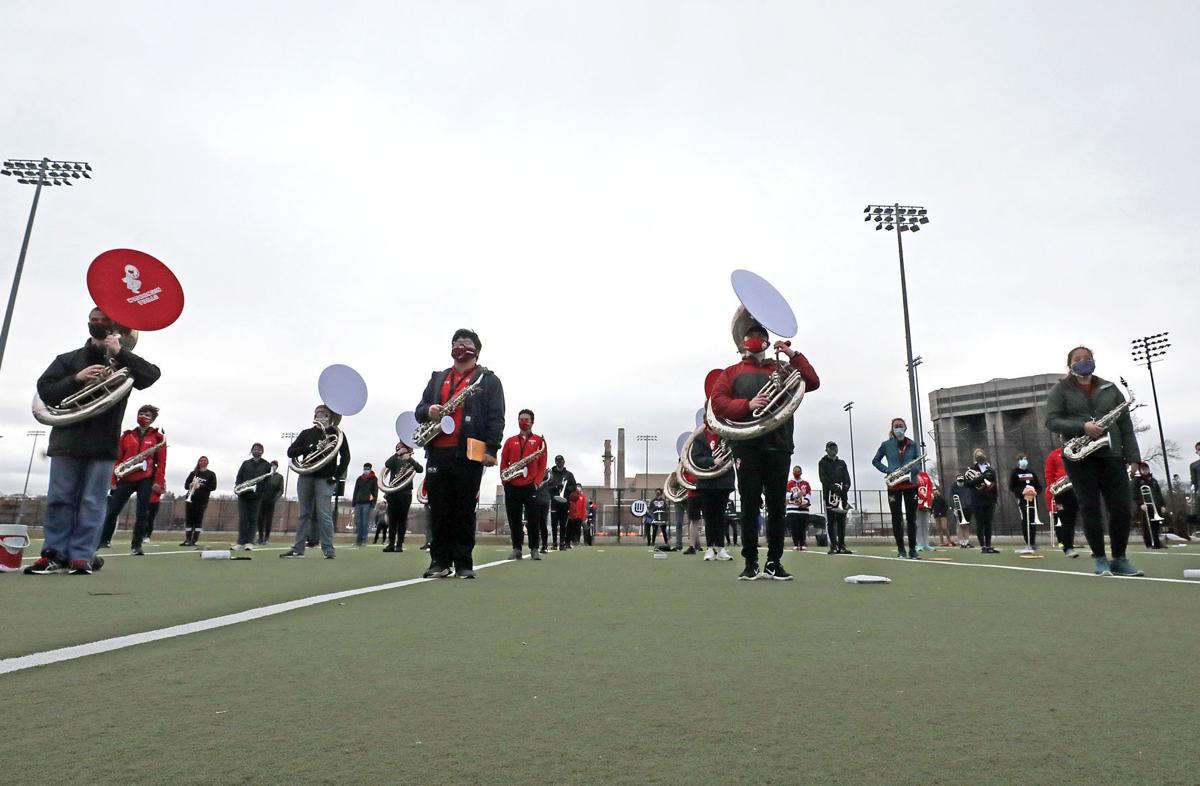 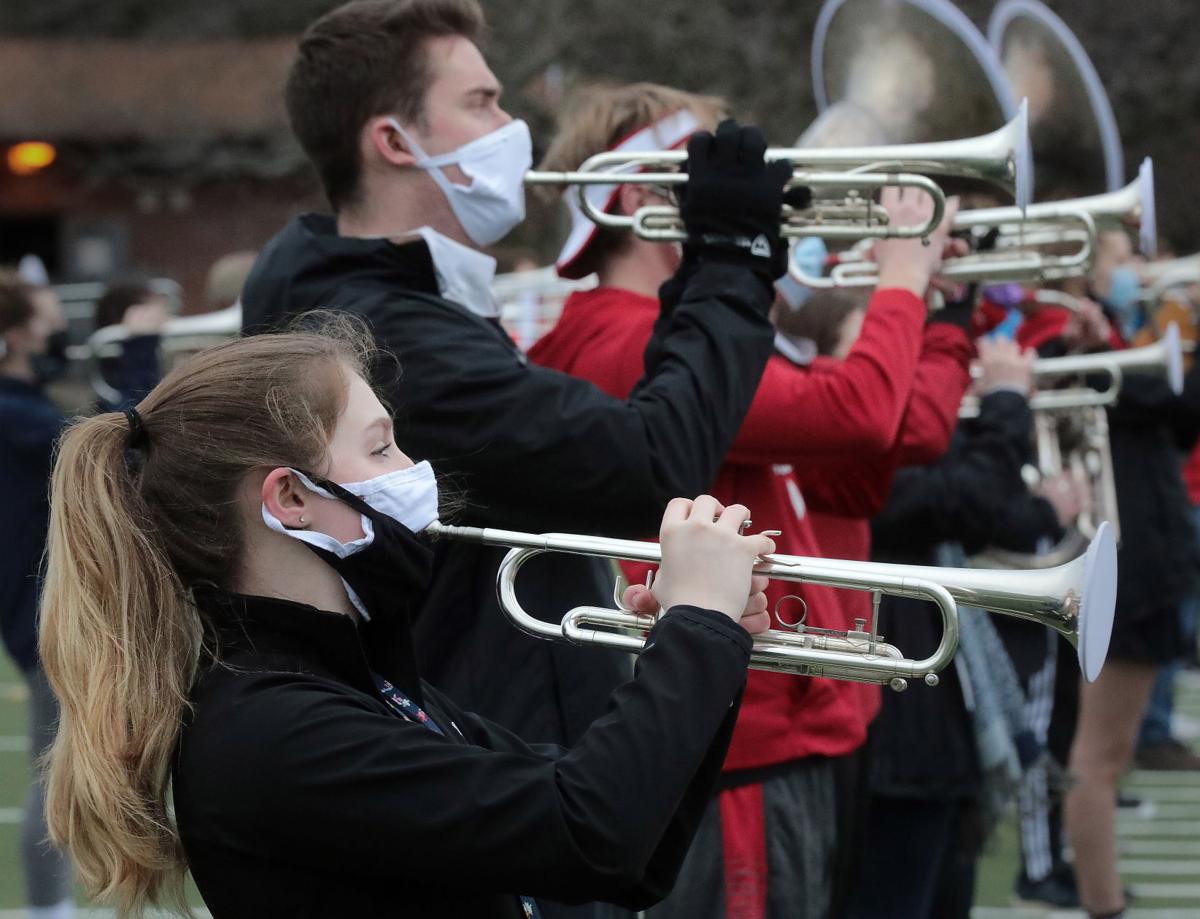