The University of Wisconsin System plans to open another investigation into alleged sexual harassment at UW-Whitewater after another woman’s account of actions by the chancellor’s husband not included in a previous investigation that led to him being banned from campus.

A Whitewater Common Council member came forward earlier this week as one of the women allegedly sexually harassed by Alan “Pete” Hill, husband to chancellor Beverly Kopper. The councilwoman, Stephanie Vander Pas, described a series of inappropriate comments and an incident of groping in a Facebook post published Sunday.

Both Vander Pas, and a state senator whose district includes Whitewater, have called for Kopper’s resignation.

UW-Whitewater spokeswoman Sara Kuhl said Tuesday that Kopper has no intention to resign, and directed all questions related to the investigation to the UW System.

Vander Pas told the Milwaukee Journal Sentinel in an interview Monday that she did not report the harassment, which occurred when she was a student-government leader, because she was embarrassed and feared retaliation. She emailed UW System President Ray Cross Friday after reading that Hill had been banned from UW-Whitewater’s campus and stripped of his unpaid appointment as associate to the chancellor, which was first reported by the Journal Sentinel.

It is unclear if additional women aside from Vander Pas have come forward since the allegations became public Friday.

Citing the active investigation, UW System spokeswoman Heather LaRoi said she could not comment on the scope or content of the investigation. She said the investigation was opened because of the UW System’s “unwavering commitment to provide a safe educational and work environment.”

A previous UW System investigation concluded in June that allegations against Hill dating back to 2015 had “merit.” That’s the same year Kopper was named chancellor. 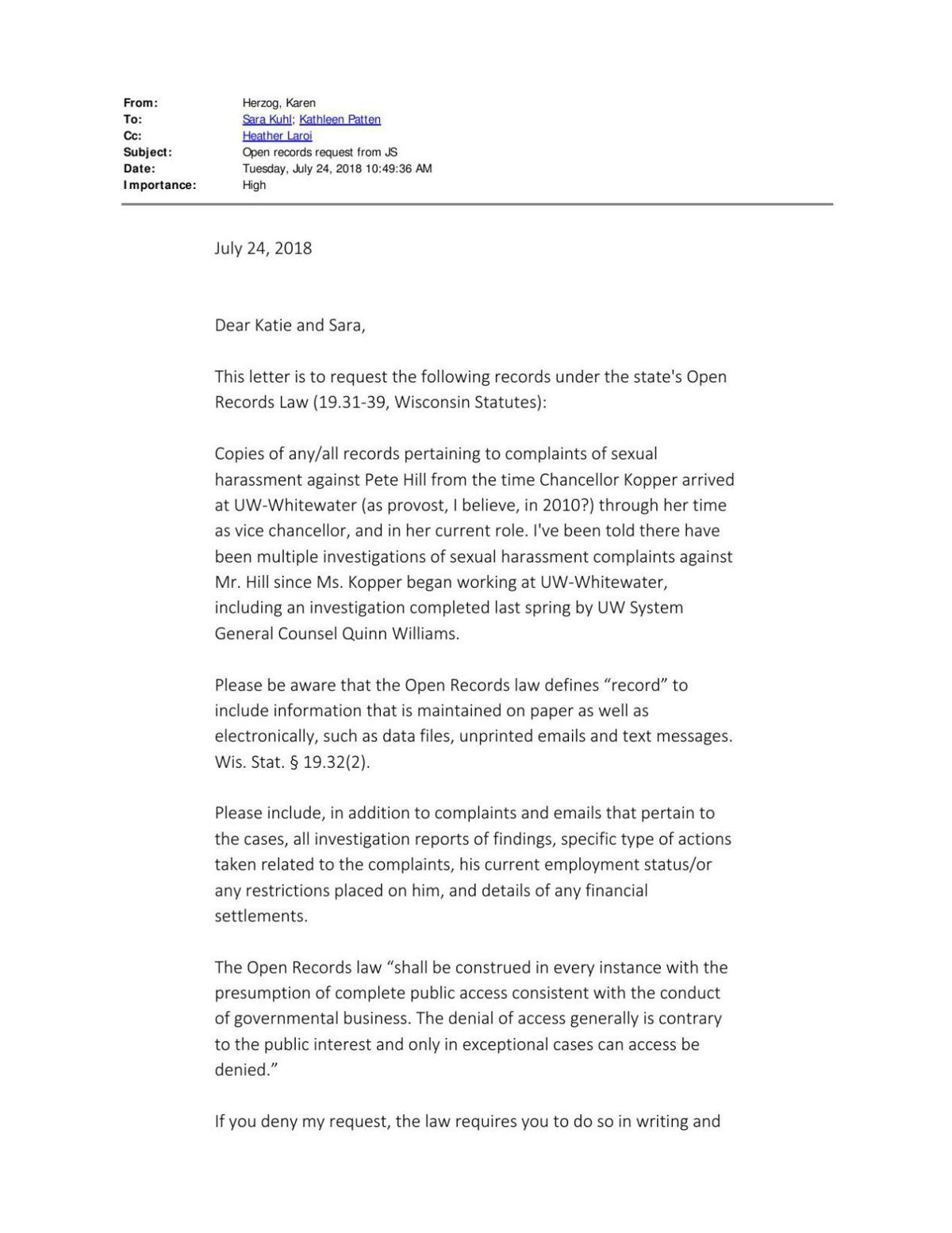 Hill has denied any wrongdoing, according to 44 pages of records released by the System. His lawyer did not return a phone message and email seeking comment Tuesday.

The UW System provided the records to the Journal Sentinel Friday, and minutes later Kopper acknowledged the investigation publicly for the first time.

“As Chancellor, my top priority has always been and will continue to be ensuring that UW-Whitewater is a welcoming campus for all and that students, faculty and staff have a positive and safe environment in which to learn, live and work,” Kopper wrote in a statement shared with the campus.

Vander Pas called for Kopper to resign, suggesting the chancellor shares some of the blame for exposing students to her husband’s alleged actions. Vander Pas did not return an email Tuesday and an automated greeting said her voicemail was not available. Her Facebook post was taken down Tuesday.

“At this moment in time, I can see no positive future for UW-Whitewater under the leadership of Chancellor Kopper,” he said.

Nass’ press secretary, Mike Mikalsen, said part of Kopper’s statement Friday — that she “fully supported and cooperated” with the investigation — is at odds with a July 10 letter she sent to Cross in which she expressed “concerns regarding certain statement of facts and interpretations” the investigator made.

The “very significant difference in tone and context” between the two statements raises questions for Nass, Mikalsen said.

Mikalsen said Nass has previously brought concerns about Kopper to UW System officials. Those concerns, however, were about UW-Whitewater’s enrollment management and budget, not about sexual harassment allegations.

Changes could have prevented the hiring of an official that sexually harassed a student at UW-Stevens Point before he was hired at UW-Eau Claire.

Shawn Wilson, who handled sexual misconduct complaints, resigned when he was accused of sexually harassing a woman on campus in 2015, but went on to hold positions handling similar complaints at two other universities, according to newly released documents. 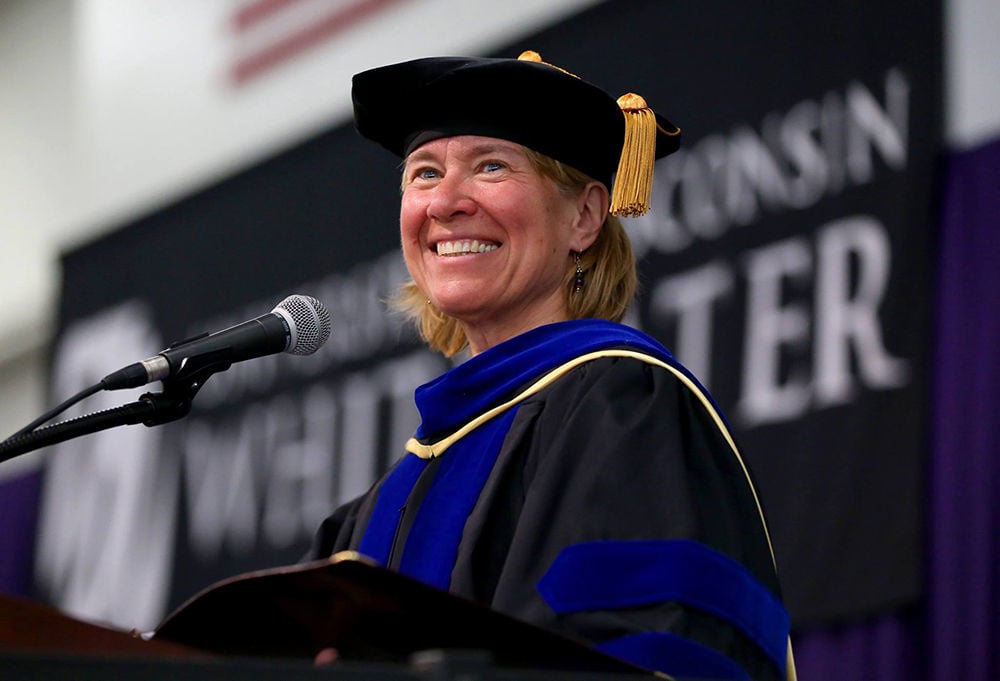 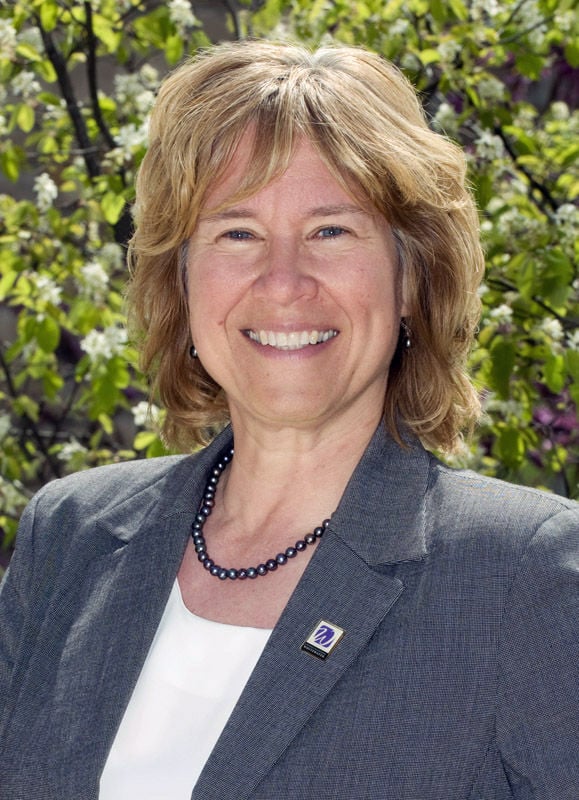