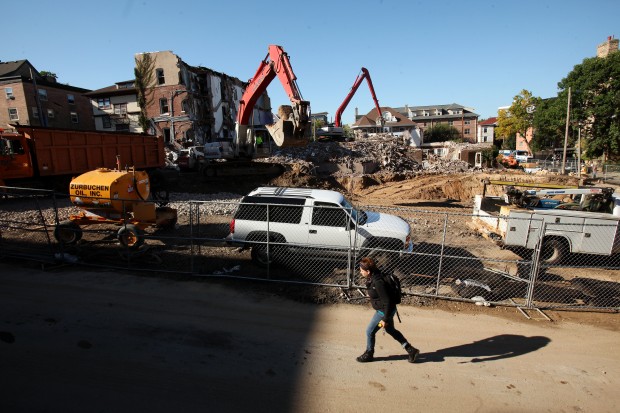 Cranes clear debris at the corner of Iota Court and Henry Street in Madison for a new development near UW-Madison's fraternity row. 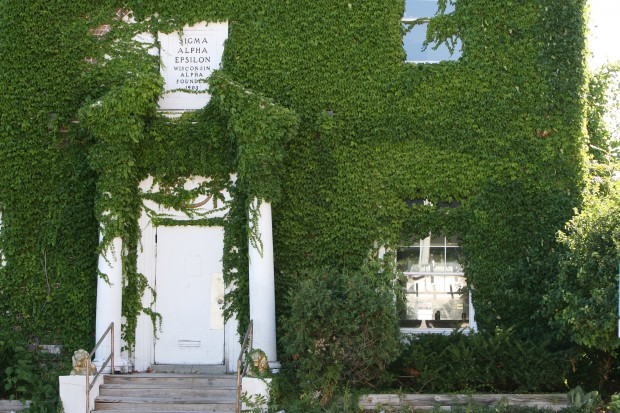 The Sigma Alpha Epsilon fraternity house on North Lake Street is covered in ivy, but a developer wants to tear it down and build a seven-story replacement. The fraternity was founded in 1903. 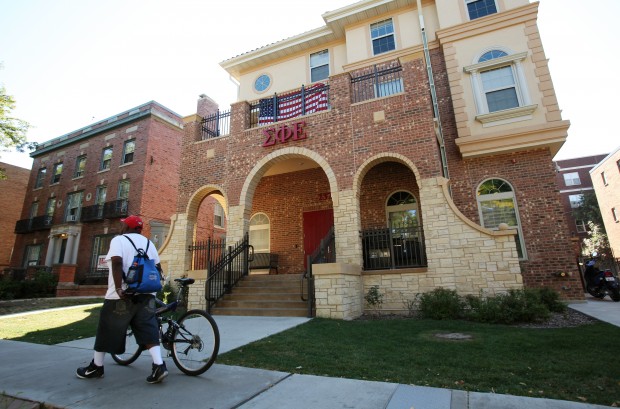 The Joseph and Rachel Jastrow house at 237 Langdon Street near UW-Madison is an example of redevelopment on fraternity row. 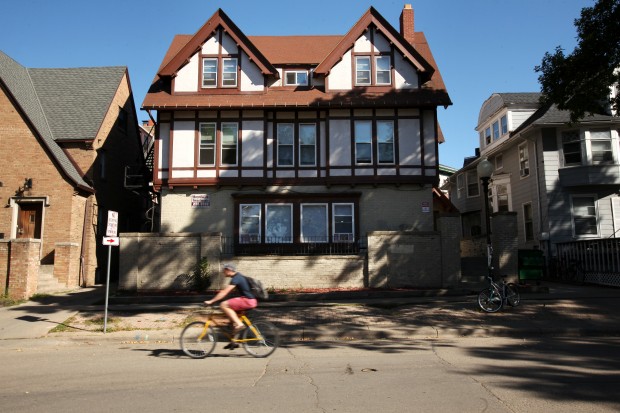 The old Delta Gamma sorority house at 250 Langdon Street in Madison is used for rentals. 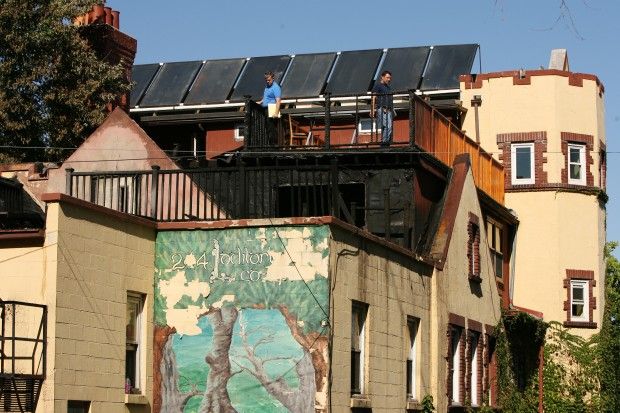 The rebuilding Lothlorien House, a co-op at 244 W. Lakelawn Place damaged in a September 2013 fire, has been delayed but will go forward, backers say. 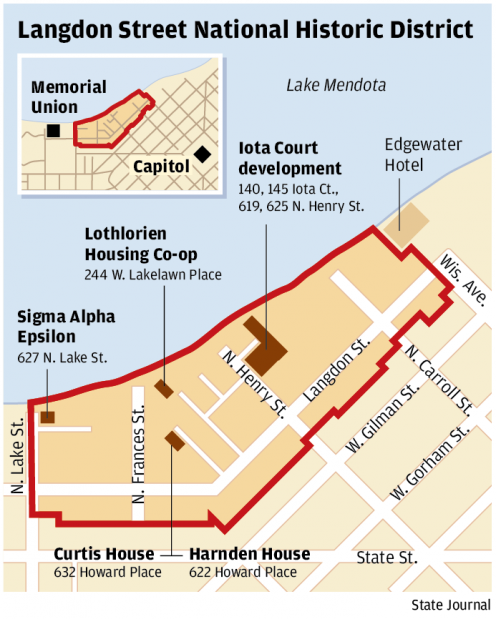 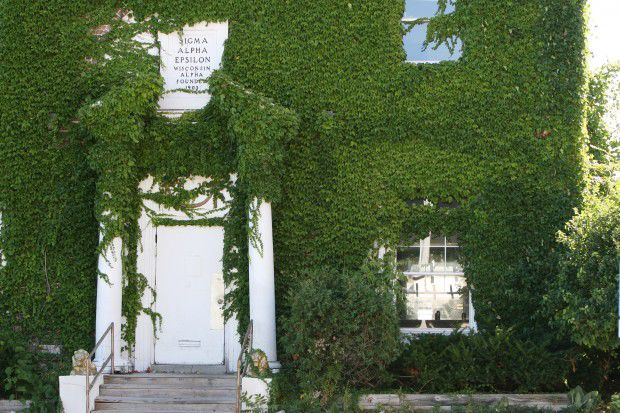 Concerned about increasing pressure for development, a group of UW-Madison students is asking the city to consider creating a local historic district in the Langdon neighborhood near campus.

The effort began in earnest early this year amid opposition to a six-story, 71-unit apartment building that will replace three smaller structures and continues as more redevelopment proposals surface in the architecturally rich neighborhood of large Victorian-era homes, rental buildings and Period Revival fraternity and sorority houses.

Recently, a developer has proposed replacing two houses on the 600 block of Howard Place with a five-story apartment building.

Last week, a fire damaged a housing co-op at 244 W. Lakelawn Place, creating uncertainty about that property. And a landowner gave notice of intent to demolish a fraternity at 627 N. Lake St. and replace it with a seven-story fraternity.

“It’s one at a time, but it adds up,” said student Conner Nett, a junior studying landscape architecture. “We’re losing the character of the area.”

After the city in February approved tearing down three buildings on Iota Court and replacing them with a 71-unit apartment building, the students collected more than 1,000 online signatures backing a historic district. Last week they submitted a formal request asking the city Landmarks Commission to consider creating a district.

Ald. Ledell Zellers, 2nd District, who represents the area, said it was “absolutely fabulous to have students involved like this and recognizing special places in the area they live in.”

Carole Schaeffer, executive director of Smart Growth Madison, said the city’s new Downtown Plan supports study of a historic district. Developers are not necessarily opposed, she said, but some worry such a district could be used to block projects.

“There can be positives,” she said. “But is it going to be something used as an obstructionist tool or will there be balance?”

Surely, not every building in the area has historic significance, and Greek Row isn’t known as a place of tidy lawns, well-appointed building interiors and pinpoint tuckpointing.

The commission will receive the students’ request at its next meeting on Monday﻿ and ask city staff to determine whether the area meets the standards, commission Chairman Stuart Levitan said.

After analysis and public input, the commission would decide whether to recommend creating the city’s sixth historic district to the Plan Commission and City Council, including specific architectural standards, Levitan said. At first glance the area meets historic district requirements, he said.

“If you said ‘Langdon Street’ to anybody who’d been in Madison for the past hundred years they would have an immediate and accurate perception of what you were talking about,” Levitan said. “It speaks to a cultural identity, a social identity, an architectural identity, and those are things that historic preservation is supposed to preserve.”

The Langdon area began as a spacious residential neighborhood for some of the city’s most prominent 19th century families but emerged as a student enclave in the 20th century. In 1986, the district was listed in the National Register of Historic Places.

The national district, roughly bounded by Lake Mendota, Wisconsin Avenue, rear yards of properties on the south side of Langdon Street and North Lake Street, provides tax incentives to property owners to preserve and rehabilitate existing historic housing stock. But it doesn’t have the teeth of a strictly regulated local district.

“Each week we see more demolition permits coming in to chip away at the historical integrity,” Levitan said. If enough of the older buildings are demolished the area could lose its national historic district status, thus eliminating the tax incentives, he said.

Madison’s Downtown Plan “encourages higher density because of the area’s proximity to campus and the core Downtown, but not at the expense of losing its historical resources,” city principal planner Bill Fruhling said.

Jason Tish, executive director of the Madison Trust for Historic Preservation, is concerned that the plan isn’t strong enough to fend off developers. Historic district designation wouldn’t prevent development, he said, but would assure the Landmark Commission has a say. There are several vacant parcels and parking areas, as well as a few buildings out of character for the area, that would be appropriate for development, he said.

Langdon Street’s location makes it particularly vulnerable because of its perceived value to developers.

“You’ve got waterfront property that’s within walking distance of the university that is coveted and would be desirable to tens of thousands of potential tenants,” Levitan said. “And you’ve got property that is 80, 90, 100 years old or more.”

Tish said in most cases neighborhood property values stabilize or increase from a historic district designation, but Langdon Street property already is treasured because of its location.

“This area is important historically to the heritage of the city and it’s also important for developers who want to make money off of it,” Tish said. “That is the point of friction.”

The changes could include elimination.

A fraternity at UW-Madison has been kicked out because of a "dangerous hazing environment" fostered by the house.

Cranes clear debris at the corner of Iota Court and Henry Street in Madison for a new development near UW-Madison's fraternity row.

The Sigma Alpha Epsilon fraternity house on North Lake Street is covered in ivy, but a developer wants to tear it down and build a seven-story replacement. The fraternity was founded in 1903.

The Joseph and Rachel Jastrow house at 237 Langdon Street near UW-Madison is an example of redevelopment on fraternity row.

The old Delta Gamma sorority house at 250 Langdon Street in Madison is used for rentals.

The rebuilding Lothlorien House, a co-op at 244 W. Lakelawn Place damaged in a September 2013 fire, has been delayed but will go forward, backers say. 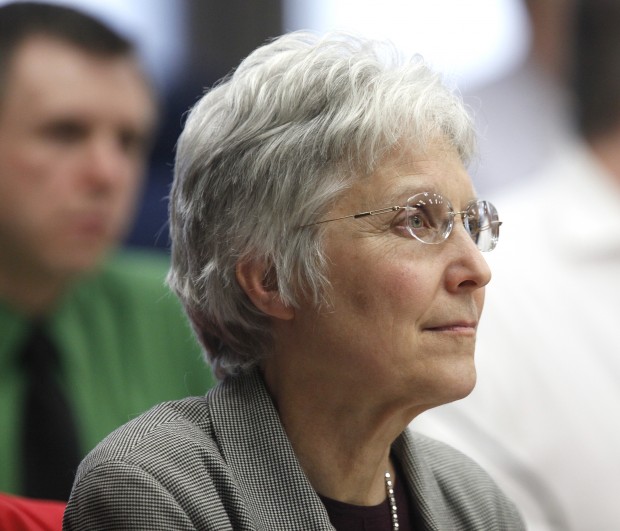