Hundreds of UW-Madison graduate students staged a sit-in Friday at Bascom Hall, seeking to have their student fees waived, a “living wage” and passage of policies governing their employment that have been under discussion with the university’s administration for almost two years.

The Teaching Assistants’ Association, the oldest graduate student employee union in the U.S., has a long history of fighting for higher wages and fee waivers. The organization, which marks its 50th anniversary this year, coordinated a campaign bringing awareness to what they say are poor wages and working conditions for the nearly 5,000 graduate assistants employed as teaching assistants, research assistants and project assistants.

The union’s efforts culminated Friday with about 400 graduate students protesting for the university to meet six demands, according to co-president Sara Trongone.

“People began sharing stories with the union or within their own departments,” she said. “People saying ‘I can’t afford rent.’ ‘I can’t put food on the table.’ We were hearing murmurings about this from every corner of the university from engineering to history to the professional schools. There’s broad and deep support for these six demands to improve our working conditions and, quite frankly, to keep us out of poverty.”

The sit-in comes at a time of national discontent among graduate student workers.

All UW-Madison students will pay nearly $1,300 in fees this academic year. The money goes toward student bus passes, the Wisconsin Union, University Health Services and other student services. International students pay an additional $200 per academic year.

“We value the contributions of our graduate students to the mission of UW-Madison,” Laurent Heller, vice chancellor for finance and administration, said in a statement issued through a spokeswoman. “They are vital to the university’s academic and research excellence.”

But waiving mandatory fees for roughly 8,100 graduate students would have “substantial funding implications for the university,” he said.

The graduate student union’s most recent contract passed in 2009, but hasn’t been updated since then. The university follows the 2009 contract’s terms, although some provisions are no longer in place since 2011.

The union has worked with university administration on a new set of policies regarding employment-related matters since fall 2017. The policies, once planned to be finalized last July, are still in draft form, she said.

A university official said the policies are close to being finalized.

Trongone credited the university’s human resources department for trying to “champion” graduate workers’ rights, but said “It’s been months and months and we haven’t even been given a clear answer to what’s behind the delay.”

“There has been no deliberate delay,” university spokeswoman Meredith McGlone said. “We want to have clarity as well and are motivated to get this done; however, a collaborative approach takes time and we also want to get it right.”

Graduate students who work at least 33% employment are paid a stipend as well given free tuition for their own studies.

Still, graduate students say it’s not enough money to live on — especially when they say the university discourages them from pursuing second jobs to supplement their part-time income.

Megan Kennedy, a fifth-year doctoral student in the Department of German, Nordic and Slavic, said she often hears from administrators that graduate students’ penny-pinching lifestyle is only temporary.

“I’ll be here for seven or eight years,” she said. “That’s not an insignificant amount of time.”

While serving as a teaching assistant and privately tutoring on the side, Kennedy spent two years on food stamps. Others regularly visit food pantries.

Kennedy recalled bracing for calls from a debt collection agency about an unpaid $700 medical bill one year. She said she could not address the bill until her university fees were paid.

Ellen LeClere, who will graduate this year with a doctorate in information studies, said the annual fees represented about 10% of her take-home income.

Friday’s sit-in featured tables throughout Bascom Hall’s first-floor lobby for students to learn about the union’s history, receive campaign buttons with slogans such as “Fees are wage theft” and write letters to Chancellor Rebecca Blank.

A poster taped to a wall outside Blank’s office asked: “If our administration does not listen, what do we do next? How do we win?”

Scribbled answers — striking, withholding grades, blocking Observatory Drive at 5 p.m. as administrators head home — represent clear escalations from the non-confrontational style on display Friday. A student strummed guitar, others waited in line for slices of Ian’s Pizza and many hunched over laptops to grade or work on research.

Barret Elward, a research assistant for the nuclear engineering and engineering physics departments, said he hopes the sit-in will spark a real conversation with administration and isn’t seen as “just a bunch of bohemians grubbing for money.”

“Adjuncts and TAs everywhere are getting paid less and less to do more and more,” he said. “People have legitimate grievances.”

They're seeking a 2% inflationary raise that would still be less than what nonunion employees received.

Friday's protest comes after hundreds of graduate students on April 5 had staged a sit-in at Bascom Hall asking improvements to work conditions.

The estimate represents how much UW-Madison would lose if life largely returns to normal by June. 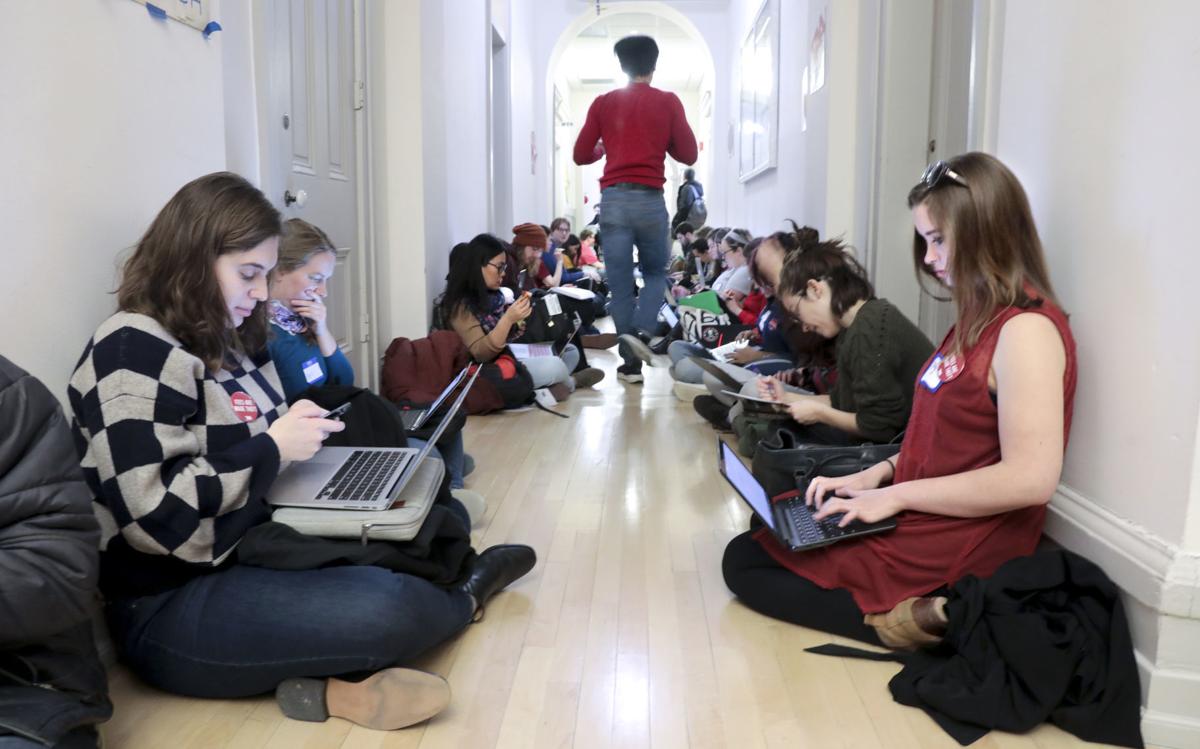 Chloe Haimson, left, and Taylor Laemmli, right, sit in Bascom Hall during a demonstration Friday as part of a campaign for higher pay and better working conditions. Both are graduate students in sociology. 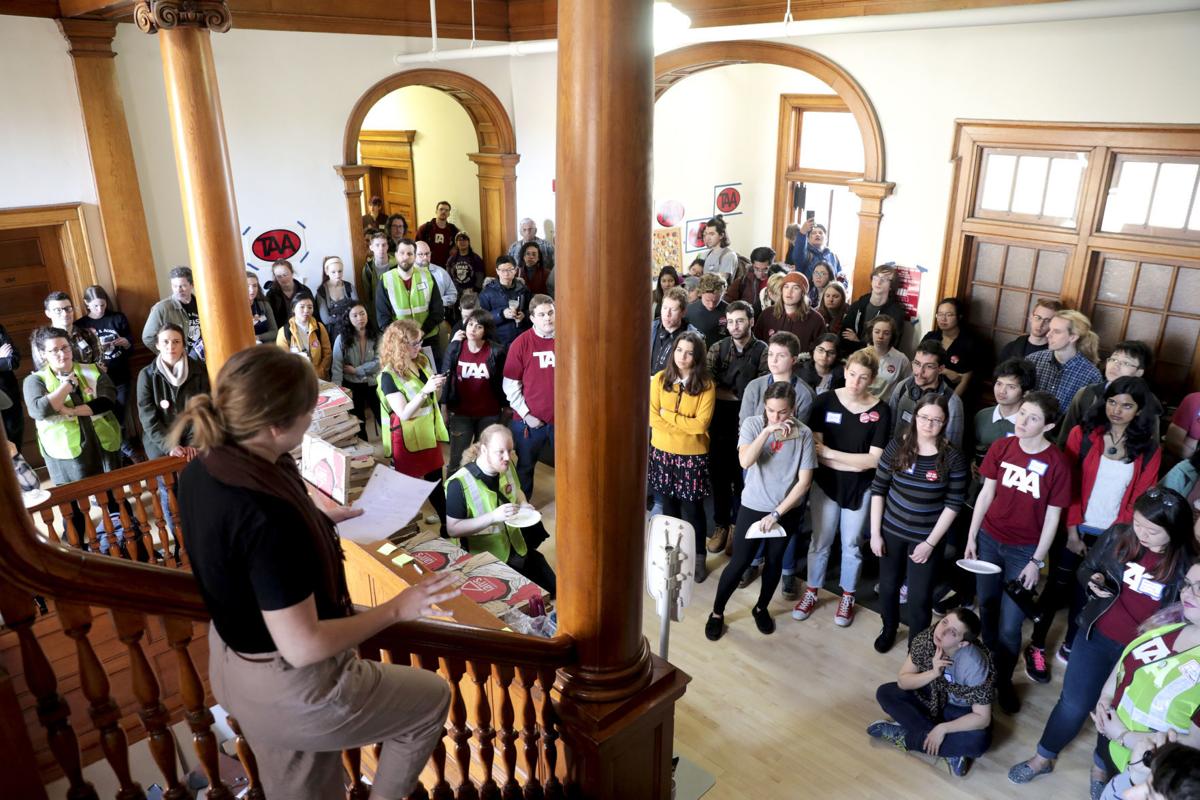 Ellen LeClere, left, speaks to a couple of hundred graduate student workers during Friday's sit-in. She urged them to put pressure on the UW-Madison administration to pass policies regarding their employment. 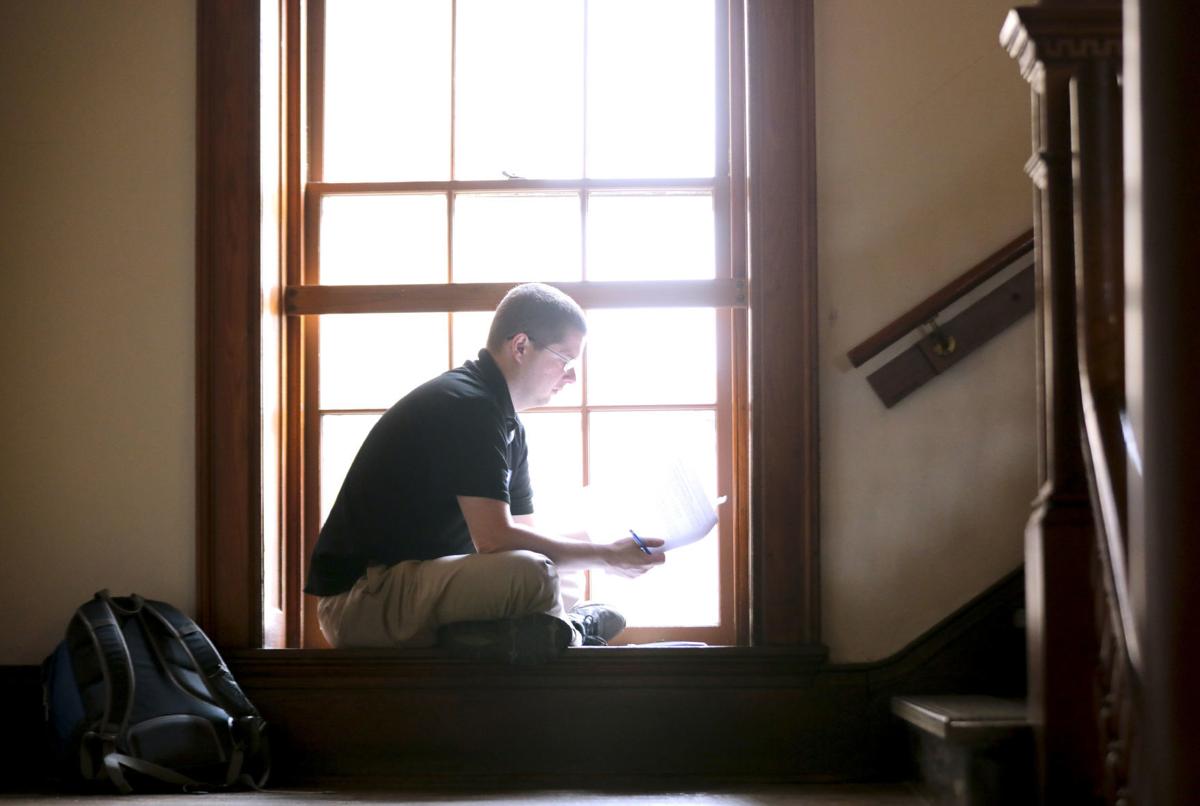