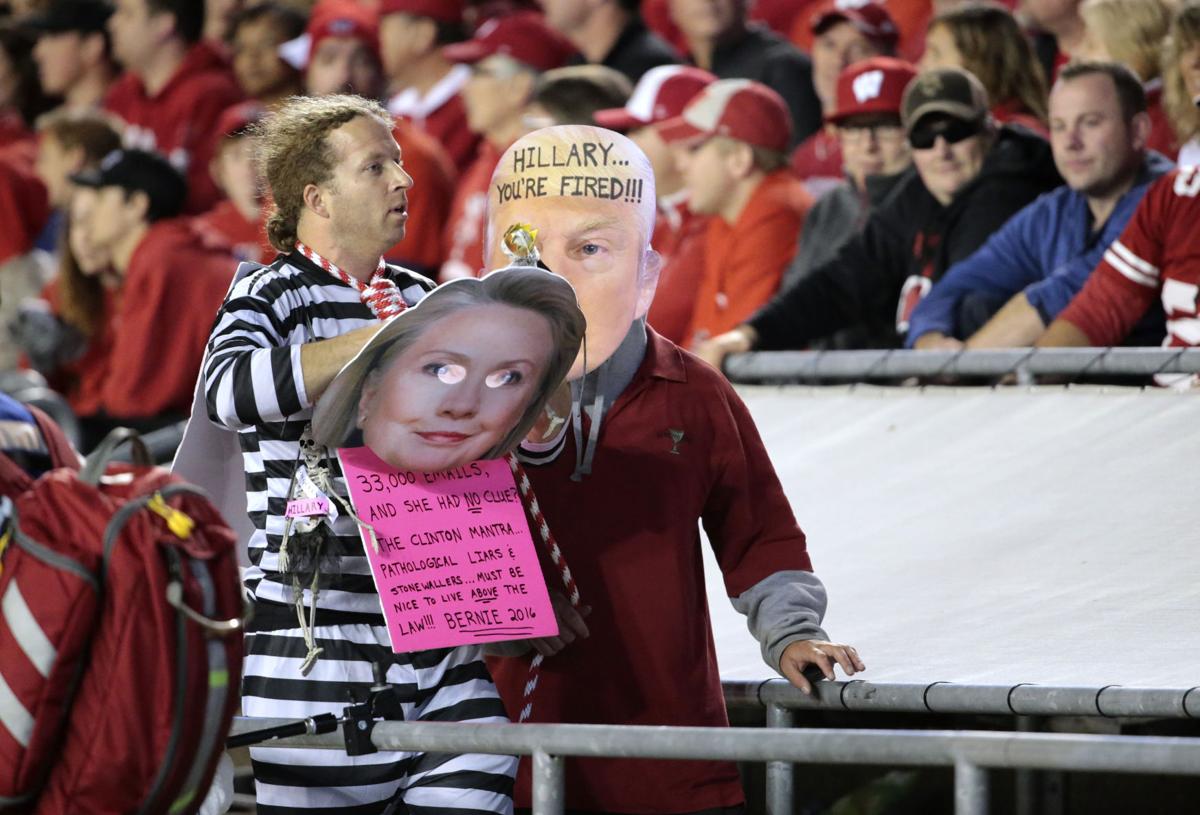 Two unidentified people wore costumes at Saturday's Wisconsin football game that depicted one as Donald Trump holding a noose around the neck of a man who wore a mask with Hillary Clinton on one side and Barack Obama on the other. 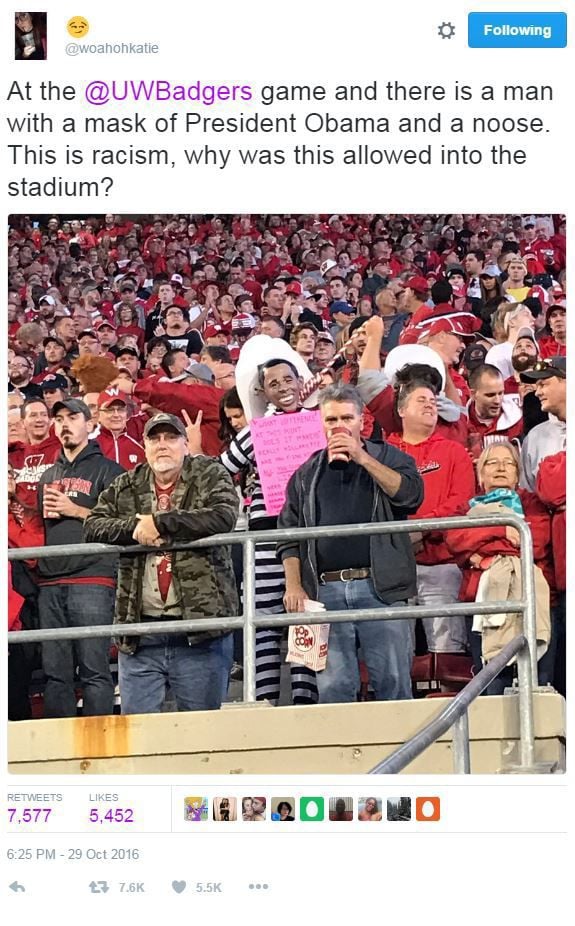 A football fan wearing a Donald Trump mask holds a noose around the neck of a man with a Barack Obama mask on one side and a Hillary Clinton mask on the other in this tweet posted by @woahohkatie during Saturday's Badgers game against Nebraska.

A costume depicting President Barack Obama with a noose around his neck at Saturday's Wisconsin football game has ignited a firestorm on social media and on campus, with students, faculty and others denouncing both the people who wore it and what some considered a weak response to the incident from UW-Madison.

Outrage over the costume grew over the weekend and through Monday, raising questions about free speech and whether the university appropriately handled a display many saw as highly offensive.

During the home game against Nebraska, one fan wore masks of Obama and Democratic presidential nominee Hillary Clinton, along with a prison jumpsuit and the noose, which was held by another person wearing a mask of Republican nominee Donald Trump.

At the @UWBadgers game and there is a man with a mask of President Obama and a noose. This is racism, why was this allowed into the stadium? pic.twitter.com/zKEqhdDYny

According to UW-Madison, Camp Randall Stadium's guest services staff asked the person wearing the noose to take it off, which he agreed to do during the first half. The fans were allowed to stay in the stadium, officials said.

On Monday, UW-Madison spokeswoman Meredith McGlone said, "Stadium staff monitored the fan to ensure that he did not put the noose back on and was prepared to remove him if he did."

However, Wisconsin State Journal photos taken late in the third quarter of Saturday's game show the duo walking around Camp Randall Stadium with one of them once again wearing the noose and a mask of Clinton.

Marc Lovicott, a spokesman for UW-Madison police, said the department monitored the costume wearers with a camera throughout the game, but "from our vantage point, it appeared as if the noose had remained off."

As photos of the costume drew national attention, UW-Madison students and others questioned why the fans weren't kicked out of the game.

Responding to that criticism Sunday, Chancellor Rebecca Blank wrote in a statement that "once the noose was removed, the decision was made that the remainder of the costume fell within the stadium's costume policies."

Blank and campus officials have said the fans who wore the costume were not ejected because their display was protected by the First Amendment.

"The costume, while repugnant and counter to the values of the university and athletic department, was an exercise of the individual's right to free speech," read a UW-Madison statement Saturday night.

UW-Madison professor and First Amendment expert Donald Downs said there is not a definitive answer to whether UW had the authority to kick the fans out, since universities are allowed to place some restrictions on speech in settings such as a football game. At issue is whether the use of a noose violates UW's conduct rules for fans at Camp Randall, Downs said.

"If they had done this outside the stadium … that would be a public forum and they would be completely protected in doing that," he said of the fans. "The university does have some rights to set some limits … inside the stadium."

Ultimately, Downs said he approved of how officials handled the costume, saying that institutions should defer to allowing speech if their ability to restrict it is up for debate.

Professor Christy Clark-Pujara, who teaches about the history of lynching in the UW-Madison African-American studies department, was one of several people who took issue with the university's response to the incident.

"It's kind of boilerplate: 'This is awful, this is not who we are,'" Clark-Pujara said.

Although Blank and campus officials condemned the costume, Clark-Pujara said their statements glossed over the brutal history of lynchings, in which thousands of black men and women were killed, and fell short of teaching students about why the image of Obama in a noose is so appalling.

She said UW-Madison's statements also failed to acknowledge that the costume was part of broader problems people of color face at the predominantly white institution, where a series of racially charged incidents this spring led to protests and new programs aimed at improving the climate on campus.

"This is a really big deal and it should be treated that way," she said.

A man attended Saturday's UW-Madison football game at Camp Randall Stadium in a President Barack Obama mask while wearing a prison jumpsuit and a noose around his neck.

The survey asks a wide range of questions about whether students feel welcome at UW-Madison and how often they interact with people who are different from themselves.

The arrest became a flashpoint for students and professors near the end of a semester in which the university was rocked by several high-profile, racially charged incidents.

Some who reviewed the curriculum for the Our Wisconsin program are skeptical that it will succeed in its goal of creating a more inclusive UW-Madison.

Administrators criticized as a false choice the idea that making their institution more inclusive means limiting the exchange of ideas.

The Multicultural Student Center hosted several meetings Monday afternoon that split attendees up by their race.

The release stopped short of saying that nooses will be banned from Camp Randall and other UW athletics venues.

What would have happened if the two were students who arrived in the costumes at a fraternity mixer or a residence hall Halloween party?

During a press conference at Camp Randall Stadium, several black community leaders called for a "zero tolerance" policy for racism on campus.

University of Wisconsin athletic director Barry Alvarez said Wednesday that the university will change stadium policies in the wake of an incident Saturday when the Badgers took on Nebraska at Camp Randall Stadium.

Chancellor Rebecca Blank also apologized for how the university handled the controversy that erupted when photos of the costume spread widely online.

Fans can be kicked out of Wisconsin athletic events for conduct that could "provoke a disturbance or incite violence" under new rules announced Wednesday.

Daniel Dropik was sentenced to five years in federal prison after authorities said he set fires at two churches in predominantly black neighborhoods in Milwaukee and Lansing, Michigan.

Transgender and minority students were also much more likely to have experienced discrimination and to have seriously consider leaving UW-Madison.

Two unidentified people wore costumes at Saturday's Wisconsin football game that depicted one as Donald Trump holding a noose around the neck of a man who wore a mask with Hillary Clinton on one side and Barack Obama on the other.

A football fan wearing a Donald Trump mask holds a noose around the neck of a man with a Barack Obama mask on one side and a Hillary Clinton mask on the other in this tweet posted by @woahohkatie during Saturday's Badgers game against Nebraska. 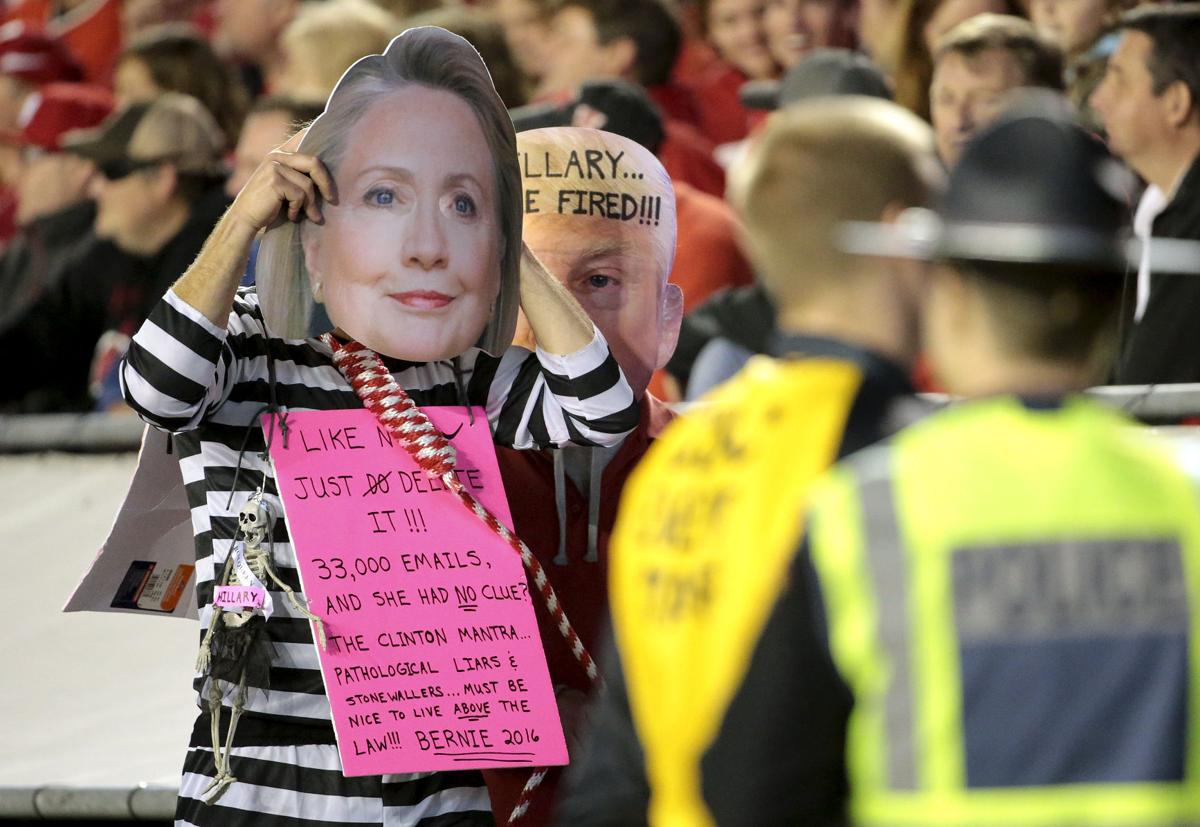 A man wearing a mask with Hillary Clinton on one side and Barack Obama on the other had a noose around his neck held by a man in a Donald Trump costume. They were seen at Camp Randall during the third quarter of Saturday's Wisconsin game.