The sole finalist in the running to lead the University of Wisconsin System withdrew his name from consideration Friday after a months-long search marred with criticism and growing concern about the candidate’s qualifications.

University of Alaska System President Jim Johnsen, 62, announced his decision just hours before the search committee had planned to meet and make a hiring recommendation to the UW Board of Regents.

“After deep reflection as to where I am called to lead a university system through these challenging times, it is clear to me and my family that it is in Alaska,” Johnsen said in a statement. “I appreciate the strong support from the search committee at Wisconsin, and for all those who supported my candidacy, but it’s clear they have important process issues to work out.”

Calls to expand the search committee beyond six board members and three high-level administrators came last year from all 13 universities and Democratic Gov. Tony Evers, but the committee forged ahead even as the pandemic paused leadership searches at a few other state university systems.

The committee’s unanimous naming of Johnsen as the sole finalist earlier this month worried many within the UW community. They were deeply discouraged by what they viewed as his dismal track record leading a much smaller state university system and feared some of the solutions he proposed or carried out in Alaska, such as the elimination of academic programs or campus consolidations, would follow him to Wisconsin.

UW-Madison professor Timothy Yu created a petition last week calling for a new search that collected nearly 2,000 signatures in a matter of days. Yu credited Johnsen for recognizing the difficult circumstances he would have entered into and deciding to drop out instead.

While the news puts the System in a bind amid both a financial and public health crisis, Yu said a new, inclusive search will better position Wisconsin’s public universities for the future.

“It’s unfortunate right now in the short term, but hopefully it will reinforce the importance of shared governance that has been severely diminished in the last five or six years,” she said.

UW Board of Regents president Drew Petersen has defended the search committee’s small size for its ability to act nimbly amid competition for highly sought leaders. The board will focus on getting through the coronavirus crisis and then consider a new search “when there is a better opportunity,” he said in a Friday statement.

“It’s disappointing, a dark day for the UW System,” he said.

A dividing theme that will likely spill over into the next search is what Wisconsin needs most in the next System leader — someone who understands the nuances of leading an academic operation or someone who can manage fiscal and political realities.

Johnsen’s appointment appeared to be a shoo-in just a few days ago, at least from the perspective of Wisconsin professors and statements coming out of Alaska.

UA Board of Regents chairwoman Sheri Buretta said Johnsen’s leadership abilities are “outstanding” and she can understand why he was a finalist for the Wisconsin job.

“We will be sorry to lose him to the University of Wisconsin,” she said.

UA Fairbanks Chancellor Dan White said in a statement that he wished Johnsen success in Wisconsin.

And the day before UW students and staff learned Johnsen was the sole finalist, he emailed an Alaskan public policy forum’s board of directors, according to an Alaskan blog called The Midnight Sun. While the official hiring process could take weeks, Johnsen told the board, he said he was likely to accept the position.

Some UA employees privately cheered last week’s news out of Wisconsin that he would likely leave Alaska.

“PLEASE take him away,” someone pleaded in a Facebook group for UA employees.

Another said she only wished a job offer had whisked him away sooner.

The delight some UA employees displayed over the prospect of Johnsen’s departure amid deep financial problems — the UA System’s board voted last week to eliminate 39 academic departments and reduce or merge five more — speaks to his lightning rod style of leadership that professors said has sidelined students, staff and even chancellors from some of the biggest decisions facing their campuses.

Johnsen’s supporters counter that he is a strong, steady leader working within difficult circumstances beyond his control: deep and repeated budget cuts that are largely dependent on the whims of the oil industry, fewer students enrolling in college, public skepticism of the value of a college degree and a geography that makes recruitment and retention of top talent difficult.

Financial turmoil has trailed Johnsen since he took the helm of UA in 2015. But the System careened into an even larger crisis last summer when Republican Gov. Mike Dunleavy slashed state spending in order to fulfill a campaign promise of increasing the annual payout Alaskans receive from an oil and gas revenue fund. He vetoed $135 million, or 41%, of the System’s state funding for a single year, which sent administrators scrambling. Media reports quoted Johnsen as saying the “house is on fire."

Facing an existential crisis, Johnsen and the board quickly pushed a move to a one-university model over the objections of many at the Anchorage, Fairbanks and Southeast campuses who said a merger would strip institutions of their identities, yield little cost savings and contradict a consultant’s 2016 report that cautioned against consolidation.

“He’s a unilateral decision maker,” Maria Williams, a professor who chairs the University of Alaska’s Faculty Alliance, said of Johnsen’s leadership style. “He does consult. But he doesn’t usually ever change his mind. He’s also inherited problems that were not of his making.”

One of Johnsen’s strengths, she said, is his political acumen. He fights for funding in Juneau and also attended rallies held around the state to support the System.

Dunleavy eventually agreed to reduce the higher-education cuts to $70 million over three years instead of $135 million over one year.

Despite the reduced scope in cuts, Johnsen marched forward with the merger into the fall until UA’s main accrediting agency expressed serious concerns with the plan.

A few days later, the board backed down from the campus consolidation plan. Johnsen agreed to an interview earlier this week, but UA System spokeswoman Roberta Graham canceled the day before it was scheduled, saying something had come up that demanded his attention.

“Jim’s been through some tough times,” said Aaron Schutt, who worked with Johnsen from 2008 to 2011 at Doyon Ltd., an Alaska Native-owned company Schutt now leads. “I’m CEO and if you ask some of my employees they may not always like my decisions but they also don’t have to make them.”

The next search looms

As the lone finalist, Johnsen’s withdrawal appears to leave the board without anyone else to consider.

Search committee chairman Michael Grebe, in a speech last week explaining the group’s reasoning in naming just Johnsen, said he had been their top choice, the other finalists dropped out, pulling a semifinalist into the top pool would be “disingenuous” and re-opening the search would add a minimum of six months.

System President Ray Cross, who announced his retirement last fall, said he would stay on until a leader is selected. It’s unclear now whether he will continue in that position or an interim president will be appointed. Also unclear is how the board will change its next search process — if at all.

The UW-Madison, UW-Milwaukee and statewide chapters of the American Association of University Professors called on Petersen and Grebe to step down from their leadership roles before a new search begins. A System spokesman declined to comment.

Even though Johnsen cited concerns with the search process, Assembly Speaker Robin Vos, R-Rochester, said he was disappointed that UW employees’ criticism drove Johnsen away. He said he had “full confidence” in the regents to find a business-oriented leader.

“If leftist liberals on campus can’t decide on the UW System president, they become critics and drive out a qualified leader,” he said. “We can’t let intimidation become the way we choose our campus leaders.”

George Mason University professor Judith Wilde, who studies the hiring of college presidents, said the naming of a single finalist is becoming more frequent while a lone finalist dropping out of a search is rare. She said she could not recall a previous search in which that happened.

Katharine Lyall, who served as UW System president from 1992 to 2004, said the way in which the search process played out would have presented Johnsen with a significant handicap coming into the job.

As the board looks ahead to its next search, Lyall said shutting faculty out of that process could lead to them looking for jobs where their input is more valued. Then academic quality can suffer, putting the UW brand at stake.

“These things are all connected,” she said. “Hiring the System president is the single most important thing the board does. It’s worth getting it right.”

University of Wisconsin System officials are offering campuses guidelines for reopening this fall amid the COVID-19 pandemic.

Jim Johnsen, who was sole finalist for UW presidency, resigns under fire from Alaska

After Jim Johnsen sought the UW job, faculty at Alaska called on him to resign. 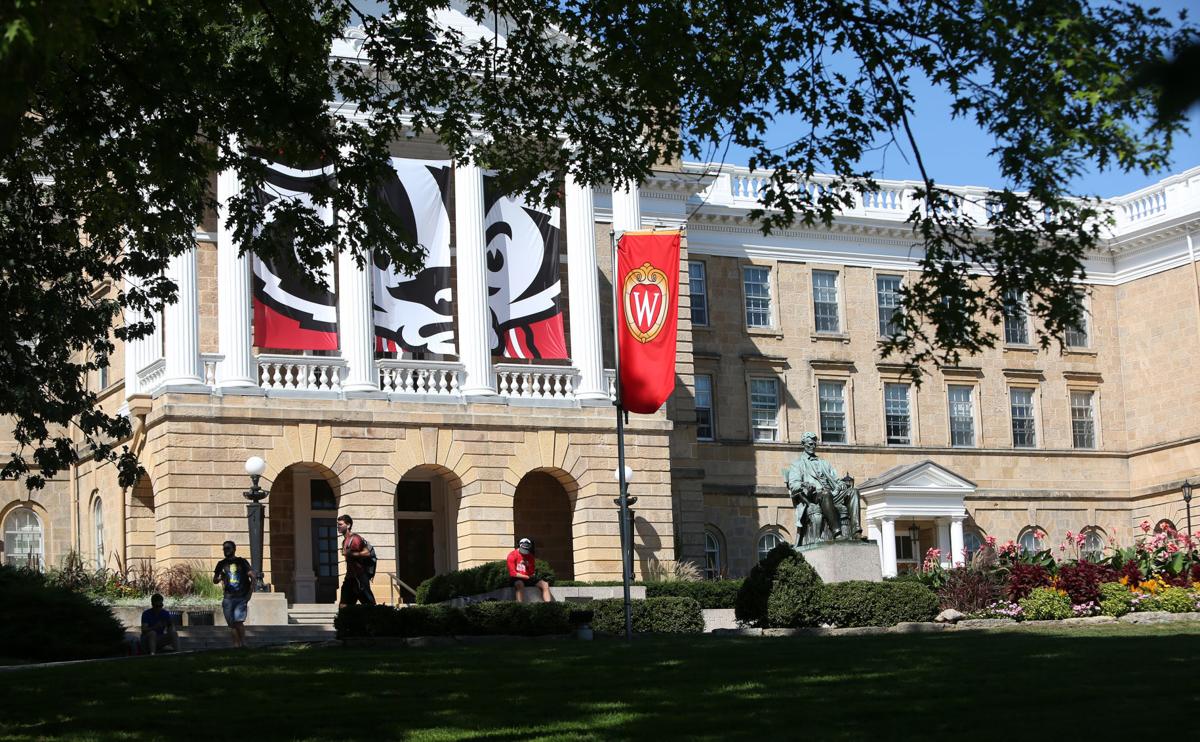 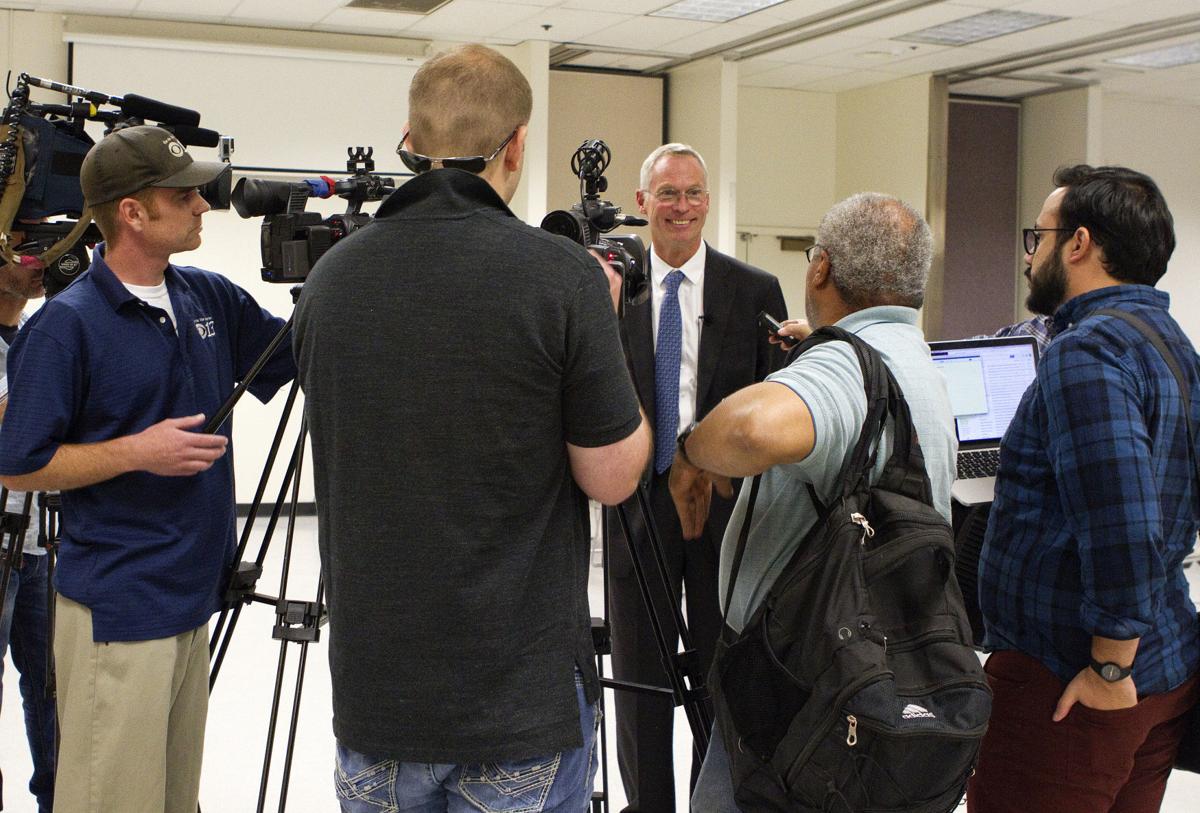 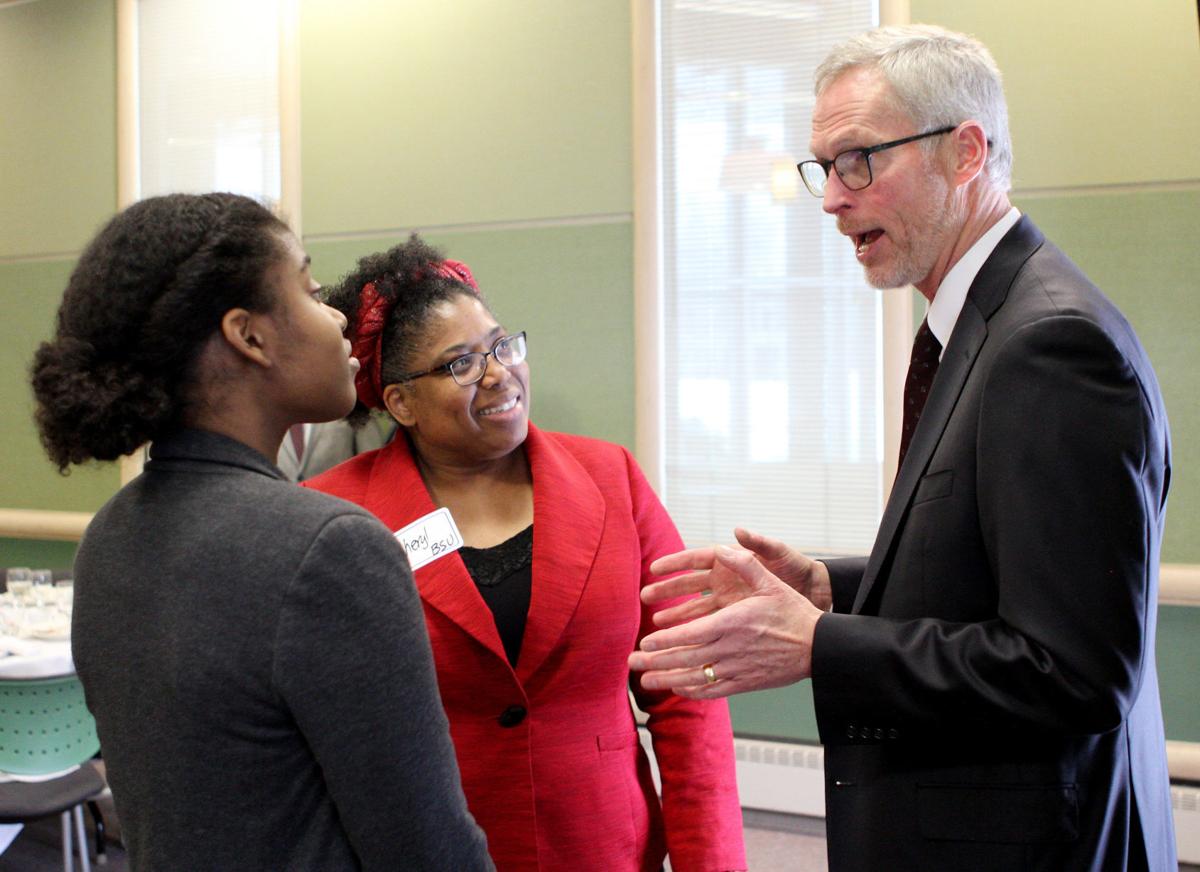 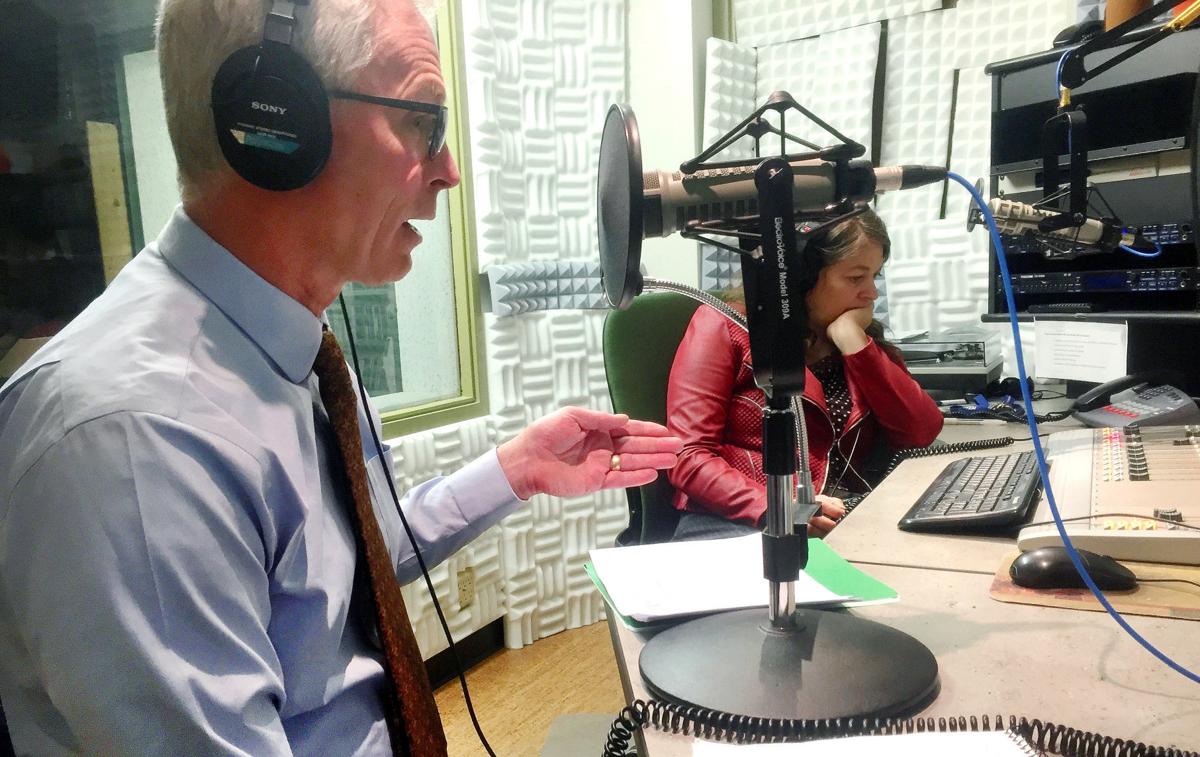 Johnsen speaking on Talk of Alaska. 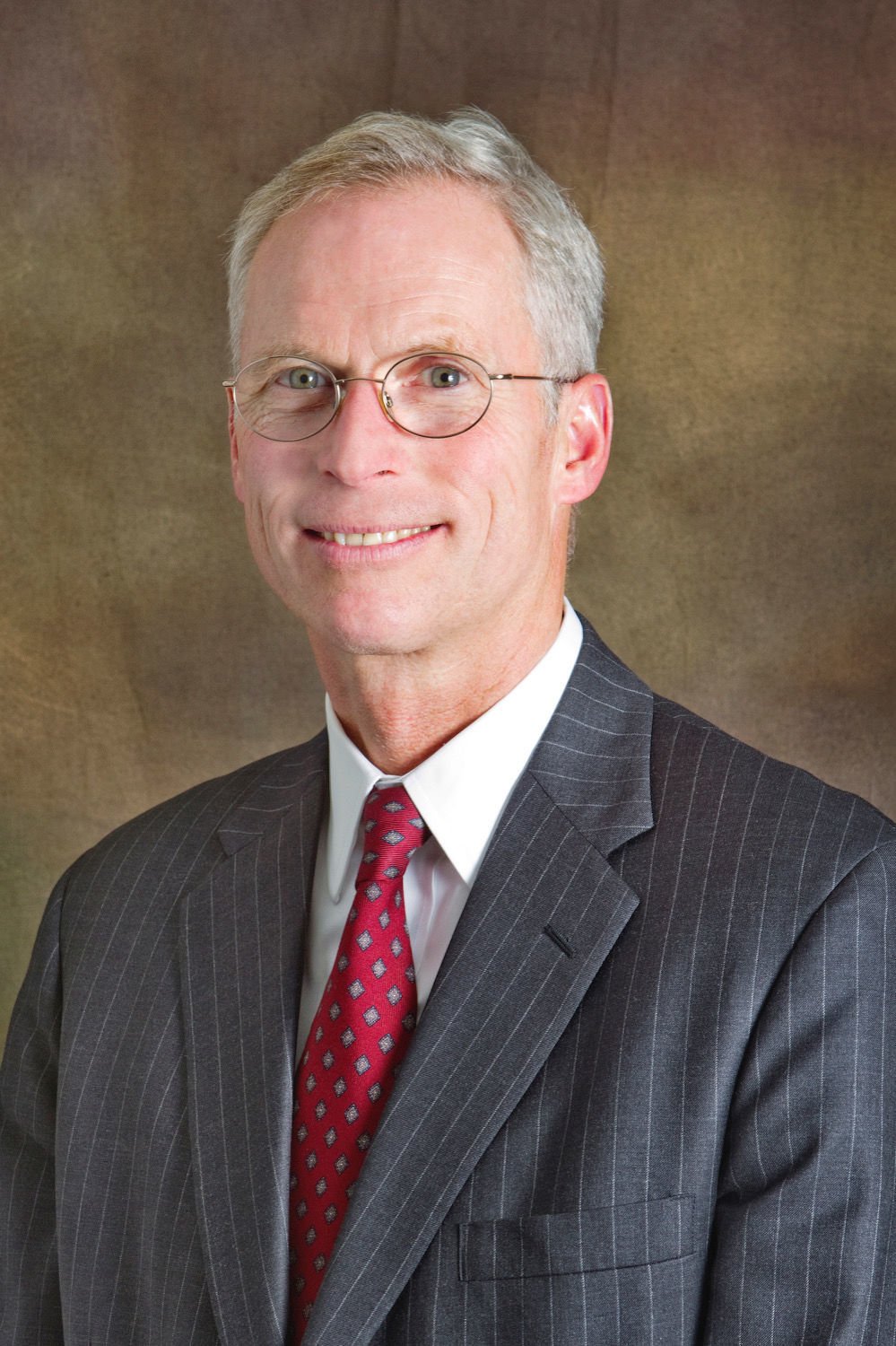