These young chimpanzees in Uganda -- Thatcher is in photos A through C, Betty in photo D -- were found to have ticks in their noses. 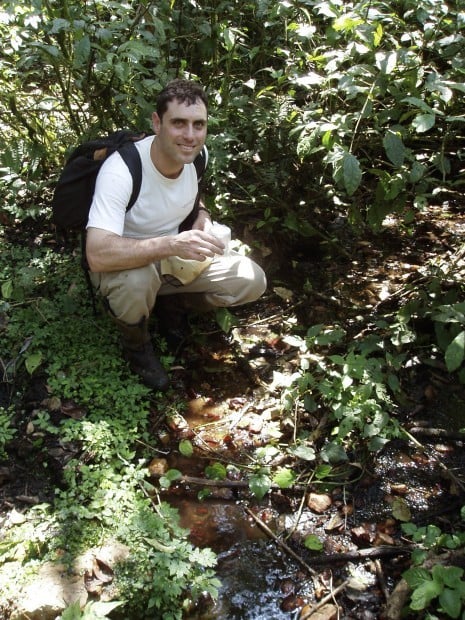 UW-Madison professor Tony Goldberg returned from Uganda with a tick in his nose, which led to new theories about the insect.

The first two times Tony Goldberg found a tick in his nose, he was in rural Uganda and responded like the rest of us.

“I was grossed out enough that I wanted them away from me,” he said.

The third time, the symptoms were the same — slight irritation and pain as if he’d blown the schnoz a few too many times — but the scene shifted to his laboratory at UW-Madison.

It was a day after he returned from Kibale National Park in Uganda, a frequent research destination for the expert in infectious diseases. It’s home to about 55 chimpanzees.

The tick, the size of a pencil eraser, had flown free to Madison in Goldberg’s right nostril, which any tick would call a first-class cabin: warm and moist with a buffet of blood.

This time, Goldberg responded like a researcher, starting an odyssey — this was June 2012 — that has led to new theories about ticks and their role in spreading disease in African chimpanzees.

“My question wasn’t why was there a tick up my nose but why aren’t more ticks up more noses?” he said.

Upon further research, he found more ticks are up more noses: one in five young chimpanzees had a bloodsucker clogging its nostril, a discovery by Harvard University researchers made possible in part by Goldberg’s own nasal find.

He removed the tick using a forceps, flashlight and mirror. He stowed it in a tube filled with fluid that would preserve its DNA and stuck it in the freezer.

The DNA got put in the mail bound for Sarah Hamer’s tick research lab at Texas A&M University.

Once sequenced, no DNA match was found among all tick species in the U.S. Further research found it to be part of the Amblyomma genus.

Next, Goldberg told a chimp research colleague at Harvard, Richard Wrangham, who had just begun a project that included taking high-resolution photos of young chimps in the wild. A closer look at the photos showed that plenty of the chimps had ticks up their noses.

It prompted another question: Why do ticks flock to chimps’ noses?

Goldberg speculates that ticks have figured out chimps enough to know that the nose is their most vulnerable spot.

Meticulous groomers, chimps can quickly flick away debris, living or not, anywhere else on their bodies.

But the nose? Chimps have fat fingers and small nostrils. It makes a safe spot for a tick feast.

Further, the nose is rich in blood vessels and the body’s foremost emitter of carbon dioxide, which is tick cotton candy. And on to the next question.

“How can these ticks crawl across your face without you noticing?” said Goldberg.

He speculates they’ve also figured out that a sleeping chimp is a vulnerable chimp.

Same goes for humans: One of Goldberg’s first tick-in-nose discoveries came at 2:30 a.m. in the African wild.

The findings were published Monday in The American Journal of Tropical Medicine and Hygiene. Although ticks of the Amblyomma genus have transmitted heartwater disease, African tick bite fever and Q fever in Africa, Goldberg said he’s suffered no lingering health problems.

“I do find myself craving bananas just a little bit more,” he said.

Sandra Adell teaches Black literature at UW-Madison. She has also acted in local theater productions, directed some plays and even moonlit as a commercial print model for advertisers.

UW-Madison, student government at odds over how to help students struggling during COVID-19 pandemic

The student council is pursuing a strategy UW-Madison said is illegal and the university is taking an approach student government calls the bare minimum.

"Sometimes, it feels as if COVID-19 will never end, and we’ll never get back to the best parts of our old traditions. But I assure you there is a light at the end of the tunnel."

An alumna said UW-Madison hid her comments about the university's animal research practices from its Facebook and Instagram accounts in a violation of her First Amendment rights.

These young chimpanzees in Uganda -- Thatcher is in photos A through C, Betty in photo D -- were found to have ticks in their noses.

UW-Madison professor Tony Goldberg returned from Uganda with a tick in his nose, which led to new theories about the insect.