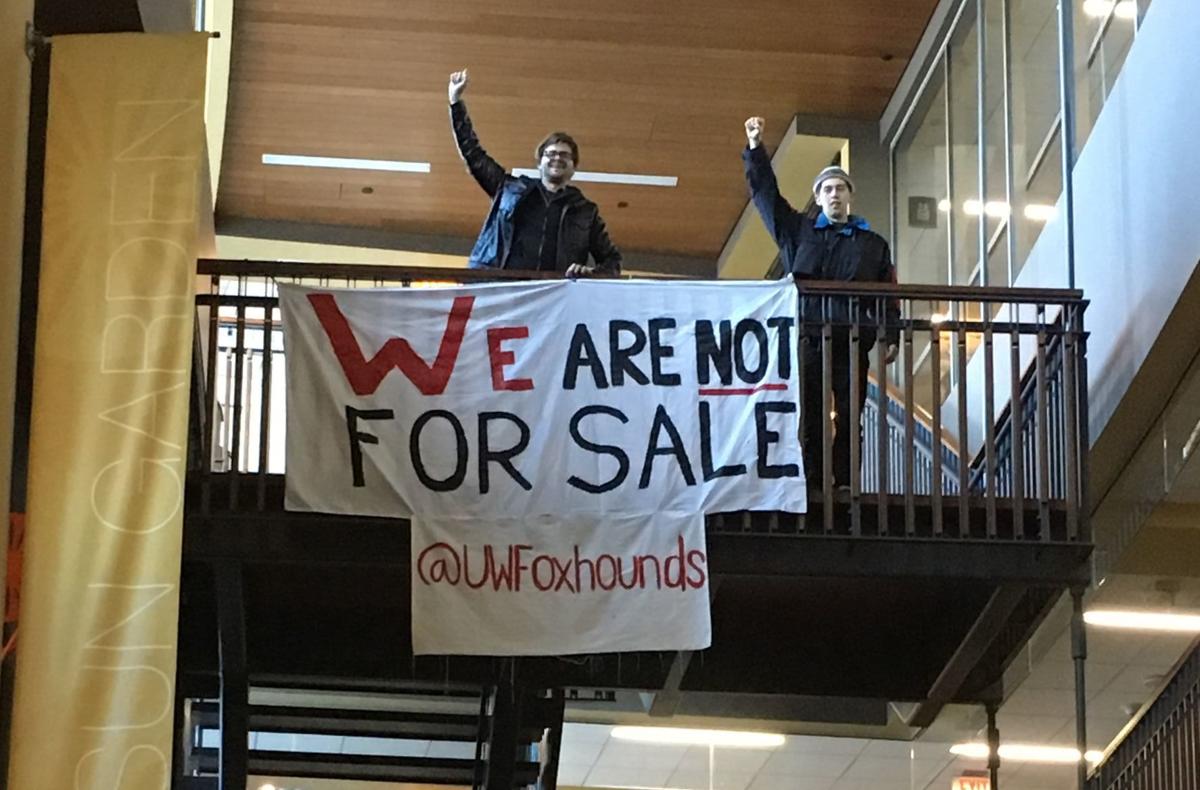 In early February, as a UW System Board of Regents meeting began, Foxhounds members dropped banners in Union South. Within minutes, officials told them flyers and banners are not permitted in Union South except for a few reserved tables. 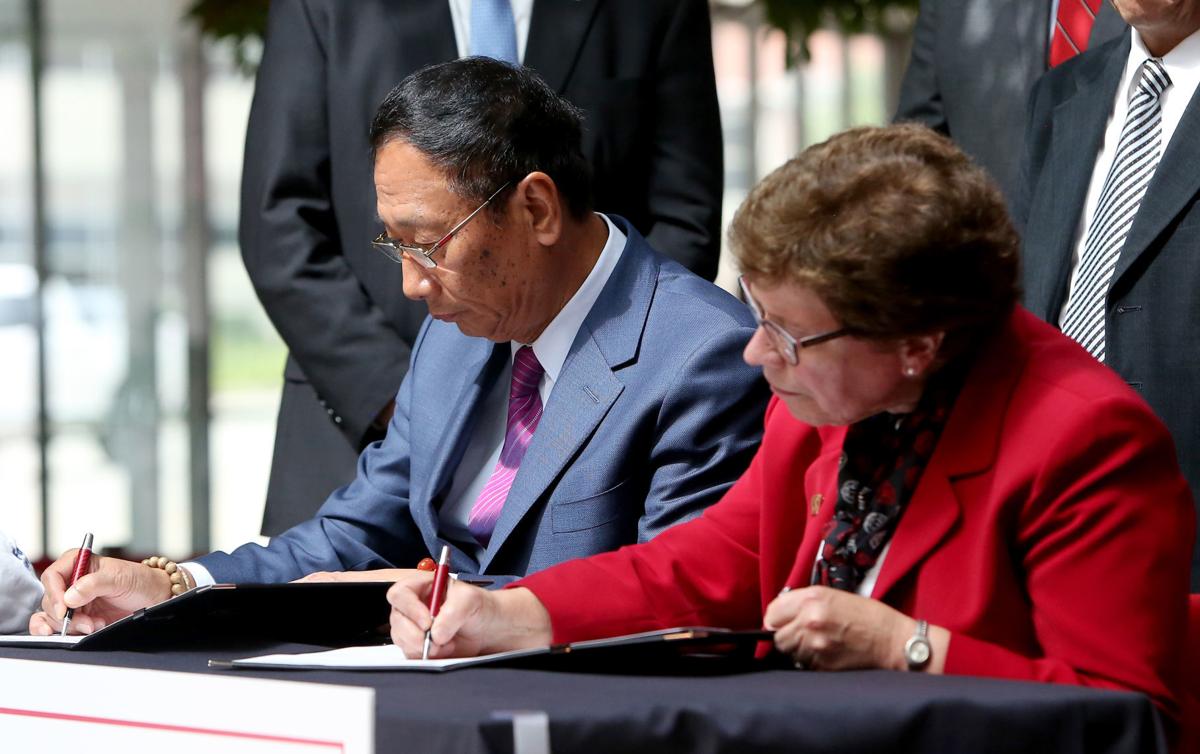 They call themselves “Foxhounds,” evoking imagery of a small pack of dogs sniffing around to root out their prey.

The small coalition of mostly UW-Madison graduate students formed in opposition to Foxconn Technology Group’s partnership with the university. They say the agreement is too cozy of a relationship between a for-profit corporation under scrutiny for its labor practices, environmental record and failure to deliver on promises, and a public university governed by a principle of public service benefiting the entire state.

Recent reports about the company’s shifting plans, including a Foxconn executive acknowledging that the bulk of jobs at the Racine County facility will be for research and engineering rather than blue-collar manufacturing, are seen by some as more potential job opportunities for college graduates.

Foxhounds interpreted the news differently, seeing the university as increasingly important to Foxconn’s bottom line and recognizing an opportunity to apply pressure on the partnership.

“If they can’t work with the university to get the development talent that they need, they can no longer operate and then the entirety of the deal could fall through,” said Liam Hutchison, a Foxhounds member who works as a researcher in the College of Agricultural & Life Sciences.

The group is mulling whether to join a lawsuit former Democratic gubernatorial candidate Matt Flynn and Chicago attorney David De Bruin are considering filing against Foxconn, challenging the constitutionality of the company’s contract with the state.

Flynn pitched the idea of Foxhounds serving as lead plaintiffs in the suit at the graduate student union’s meeting earlier this month.

“They’re young, they’re vigorous, they’re smart,” Flynn said. “They passed a resolution against Foxconn. No other entity, no labor union, no civic group, no one else has done so. Someone’s got to stand up to this.”

Foxconn officials would not say whether they are even aware of the Foxhounds group. A company statement described support for its university partnership.

Shutting down the largest tax break to a foreign corporation in U.S. history sounds almost insurmountable to a group in its infancy, but members look at Amazon and its sudden decision to pull out of a planned New York City headquarters for inspiration.

“Nobody thought that deal would fall through,” said UW-Madison graduate student Sonali Gupta, who is in her third year of the biophysics program. “But if you can identify the bottleneck and pinch it, there’s a lot of potential for people to have influence.”

Foxhounds members came together when faced with questions on how their day-to-day research could change under the Foxconn agreement.

“The ongoing work with the university is to continue to pressure more information on what’s in this deal,” because so much of it is unclear, said Karl Locher, a graduate student and Foxhounds member.

UW-Madison initiated a meeting for Foxhounds with Norman Drinkwater, the university’s interim vice chancellor for research and graduate education, earlier this month. Officials explained that the university’s master agreement sets the framework for each individual research agreement.

“The Master Cooperation Agreement with Foxconn is not an upfront ceding of rights since there is no research that is done under this agreement alone,” Drinkwater, who was not available for an interview last week, said through UW-Madison spokesman John Lucas. “Specific agreements must be negotiated for each project.”

The group learned that UW-Madison has, so far, one sponsored research agreement with Foxconn and another agreement moving through the approval process.

The university said it would not make a list of which professors are working with Foxconn available online, citing industry preference to not advertise the information out of competitiveness. Officials said the information is still available through a public records request or by asking advisers.

Gupta said records requests are likely to be fulfilled long after the short span of time graduate students have to select advisers and pick projects.

“While we didn’t agree on everything, they left saying that many of their concerns with UW were resolved,” Lucas said of the meeting.

Members say they walked away from the meeting with some clarity on the agreements, particularly related to intellectual property protections, but developed a larger concern for the university’s broad push to expand industry-funded research, meaning more cooperation with companies on projects.

“If there’s a shift toward industry research, there needs to be a reckoning on who we’re doing research with,” Gupta said.

The company’s master agreement with UW-Madison requires the university to host several events for the company to recruit students, including Foxconn Days, an annual career fair and technology showcase.

In its first act of subversion, Foxhounds showed up at last fall’s Foxconn Days with anti-Foxconn flyers.

Gupta says company representatives asked the group to leave Engineering Hall, then called security to have the students removed.

Foxconn representatives did not confirm or deny that account.

Then at a February UW System Board of Regents meeting, Foxhounds dropped two banners that read “No Foxconn at UW” and “We are not for sale.” Within minutes, officials told them flyers and banners are not permitted in Union South except for a few reserved tables.

At a recent career fair in the Kohl Center, Foxhounds members said they stood near Foxconn’s recruiting table passing out flyers discouraging students from interning and working for the company. They said they were not disruptive and did not block access to Foxconn’s table but were told by Argyle Wade, UW-Madison interim dean of students, that they were not allowed to pass out flyers or talk to other students because the group’s purpose did not align with the purpose of the event.

The university’s recollection of the event, according to Lucas, slightly differed: At the event, Foxhounds members attempted to hand out flyers and disrupt conversations between Foxconn representatives and students interested in speaking to them. Division of Student Life staff told Foxhounds that handing out flyers in athletics facilities is not allowed and neither is interfering with recruiters.

Foxhounds are mum on future protests because they’re still in the early days of organizing. They look to the graduate student union’s own roots more than 50 years ago for motivation.

The Teaching Assistants’ Association organized out of a student sit-in protesting against Dow Chemical, which made napalm, a flammable substance that causes severe skin burns and was used as a weapon by the U.S. military in Vietnam.

“This university has a history of not stepping down when very objectionable companies try and use our resources and skills for nefarious activities,” Gupta said. “We would love for that kind of spirit to be revived in this kind of deal.”

The figure falls short of the minimum 260 full-time jobs required under the state's contract with the company, meaning it will not receive any tax incentives this year.

UW-Madison’s College of Engineering and Foxconn Technology Group aim to open an interdisciplinary institute near the Racine-based manufacturing campus by 2020 with a minimum of 100 researchers, some of whom may be paid by the university.

The city of Racine has signed a memorandum of understanding with the Foxconn Technology Group to form a public-private partnership with the company. The City Council approved the agreement at its meeting Tuesday night.

Foxconn to make announcement on acquisition of Downtown Madison property

Representatives from Foxconn, BMO Financial Group, UW-Madison and the Wisconsin Economic Development Corporation will be at Monona Terrace for the announcement.

Search for UW-Madison's next vice chancellor of research unsuccessful

Officials would not say which, if any, candidates received job offers for the position, one of a handful of key deputies reporting directly to Chancellor Rebecca Blank.

The Taiwanese electronics manufacturer announced in mid-April the pending purchase of the property, which is at the corner of Main Street and Martin Luther King Jr. Boulevard and will be renamed "Foxconn Place Madison."

In early February, as a UW System Board of Regents meeting began, Foxhounds members dropped banners in Union South. Within minutes, officials told them flyers and banners are not permitted in Union South except for a few reserved tables.