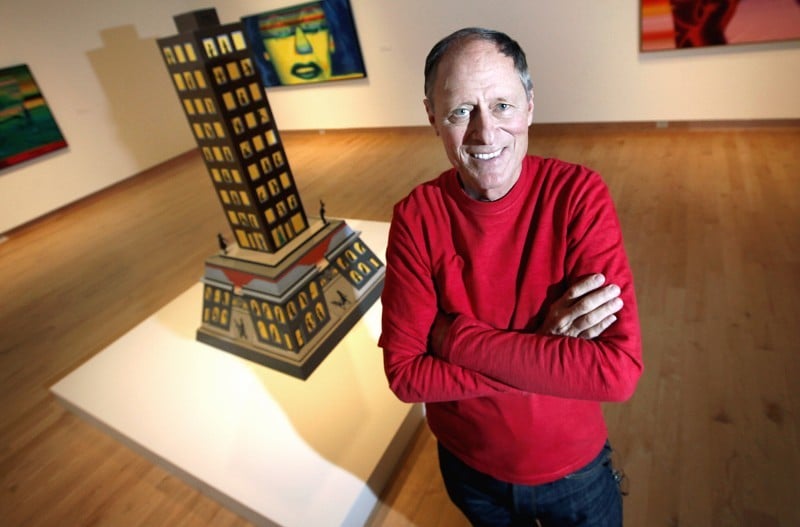 Scientist and art donor Bill McClain made one of his first purchases of Chicago Imagist art with Roger Brown's oil on wood construction titled "Pyramid with Skyscraper." It is one of 130 pieces of art McClain recently donated to the Madison Museum of Contemporary Art. 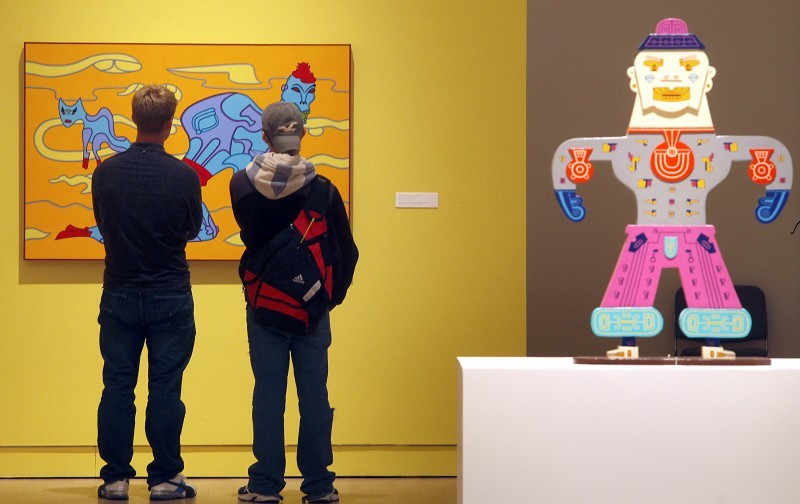 Visitors to the "Chicago Imagists at the Madison Museum of Contemporary Art" show look at art donated by Madison scientist Bill McClain. "There's absolutely no reason to consider a collection of one type superior to that of another type," McClain said. "I know people who collect steam engines, and get a great thrill out of it. It's all an expression of an appreciation of objects."

From fourth grade in suburban Chicago until he (just barely) graduated high school, the son of a high-fashion hat designer would cut class, jump on the El and head downtown to the Art Institute of Chicago and the Field Museum. There he would study, memorize and revel in timeless artworks and artifacts hung on walls or set under glass.

"It's intellectually interesting. It's interesting to the eye and to the mind. Just the sheer amount of creativity and effort that went into these works I found fascinating," recalls McClain, today a professor emeritus at UW-Madison.

He is also an art donor whose finely honed collection of 130 pieces of Imagist art given to the Madison Museum of Contemporary Art is the basis of the museum's current exhibition, "Chicago Imagists at MMOCA." Celebrating a vibrant, irreverent and color-infused genre originated in the late 1960s by a group of artists from Chicago's art institute, with influences from comic books, pulp fiction and other pop culture elements, McClain's collection was painstakingly assembled over three decades -- on a university professor's salary and with a scientist's meticulous attention to detail.

How that collection grew is a story about the intersection of art and science. How it got to MMOCA is a tale of startling happenstance.

"It's my nature to understate things," said MMOCA director Stephen Fleischman, who nonetheless notes that McClain's gift of Imagist art to the museum may constitute "the premier institutional collection of its type."

Fleischman said he does not put price tags on art collections, "in the sense that we don't sell things." But "it's fair to say (that the value of McClain's gift) is in the millions."

Viewing art from many angles

McClain, 69, also has made gifts of his deep collection of Wisconsin surrealist John Wilde's paintings to the Chazen Museum of Art and passed along his acquisitions to places such as the Kansas City Art Institute, the Milwaukee Art Museum and Lawrence and Marquette universities.

"I've been a collector as far back as I can remember," said McClain, who noted his first interest was bottle caps -- things of intense beauty to the young McClain, who would spend hours arranging them, spinning them on bike spokes, or examining them in sun and shade.

"I learned there were different ways to enjoy an art form," he said. "And that's been a characteristic of my collecting since that time: I like to look at objects from many vantage points."

Like art, science demands a creative thinking process, as evidenced in McClain's exceptional collection, said UW-Madison bacteriology professor John Mansfield, a colleague and friend with an interest in contemporary art.

"Art reveals things to us that we haven't seen before," he said. "In Bill's case, I think his appreciation for art and his scientific prowess are part of the same thing, the ability to look at something and interpret it or reinterpret it in a new way."

Though he spent his adolescence sneaking off to art galleries -- creating "mental collections" of art that he would carry around in his head -- once McClain got to Iowa Wesleyan College, "I worked really hard, typically 18 hours a day or more," he said.

He earned a bachelor's degree with three majors -- biology, chemistry and mathematics -- and a minor in physics, did his Ph.D at Purdue and postdoctoral research at the Laboratory of Molecular Biology in Cambridge, England.

The father of four became an assistant professor at UW-Madison in 1971, soon working "to the point of exhaustion," he said.

"I would take these trips to Chicago, and I discovered the Imagists right away," he said.

Seeing their art "rejuvenated me. I felt like a new person. That was pretty unexpected."

"When I have a real high in one area, it carries over to the other pretty quickly," he said.

"When you see something that's really creative, it's a catalyst. Just on the drive (home) from Chicago, I'd have a lot of great ideas about my research."

Gift began as an accident

The Imagist work "was new, new to my mind's eye," McClain said. "Everybody interprets art differently. This struck me as something very distinctive, something I could relate to and that was highly finished, and done with ultimate care."

"I would run out of money," he said. "So I would mortgage my house to get more art. I'd pay off my house and mortgage it again."

After three decades of collecting, McClain decided to nearly double the size of his 1,900-square-foot home to make way for more art. But during construction, workers hit a sinkhole and part of the house gave way.

"The whole kitchen ceiling came down," he said. "And the art that had been very carefully archived and wrapped and protected all came crashing down. There it was in a big heap on the floor."

For McClain, who had long anguished over exactly where and when to donate his collection, a decision came quickly.

He contacted MMOCA and soon two heated trucks were on the way. The art escaped unscathed.

"I realized that my collection was really splendid, and I was just the caretaker" of the artworks, he said. "They had to go to some public place for the public to enjoy."

What: "Chicago Imagists at the Madison Museum of Contemporary Art"

Scientist and art donor Bill McClain made one of his first purchases of Chicago Imagist art with Roger Brown's oil on wood construction titled "Pyramid with Skyscraper." It is one of 130 pieces of art McClain recently donated to the Madison Museum of Contemporary Art.

Visitors to the "Chicago Imagists at the Madison Museum of Contemporary Art" show look at art donated by Madison scientist Bill McClain. "There's absolutely no reason to consider a collection of one type superior to that of another type," McClain said. "I know people who collect steam engines, and get a great thrill out of it. It's all an expression of an appreciation of objects."