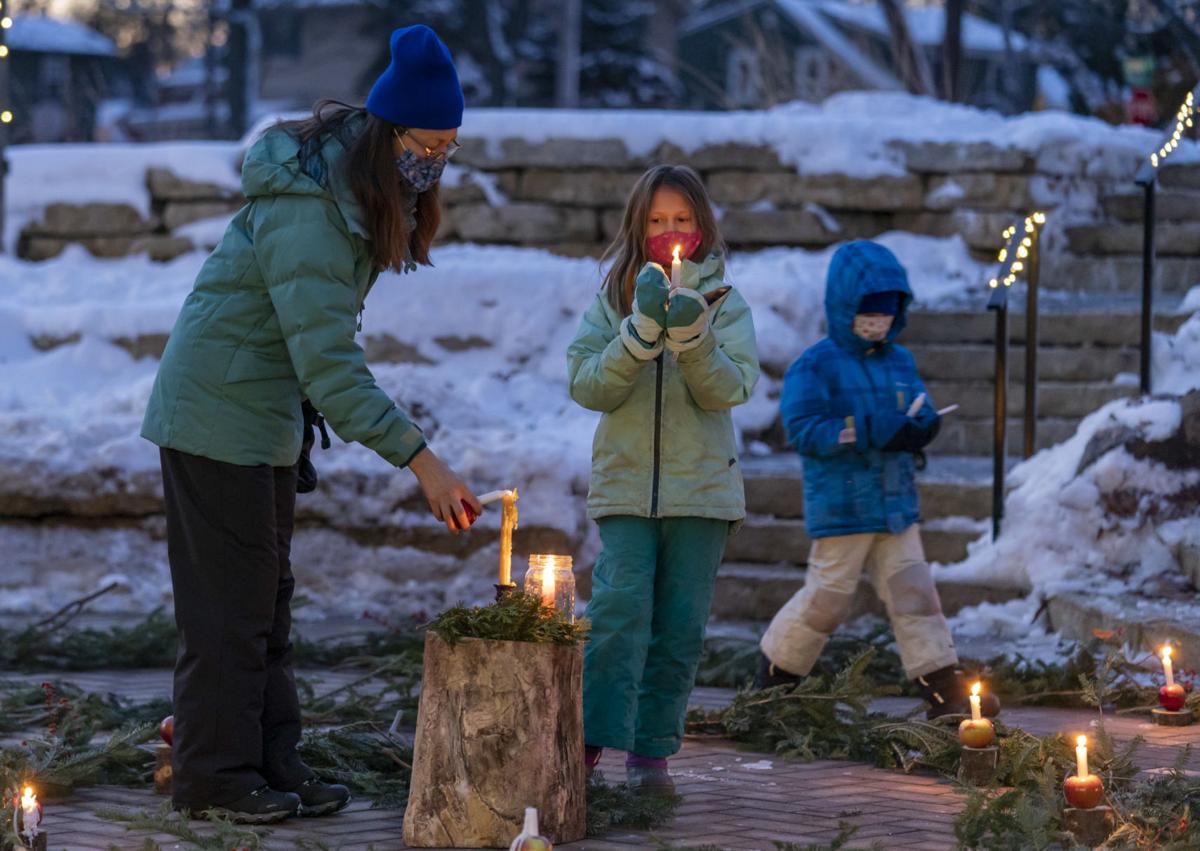 Naomi Lee and her children, second-grader Juliet and kindergartner Marcus, light their candles in a spiral walk at Wingra School to celebrate the winter solstice. 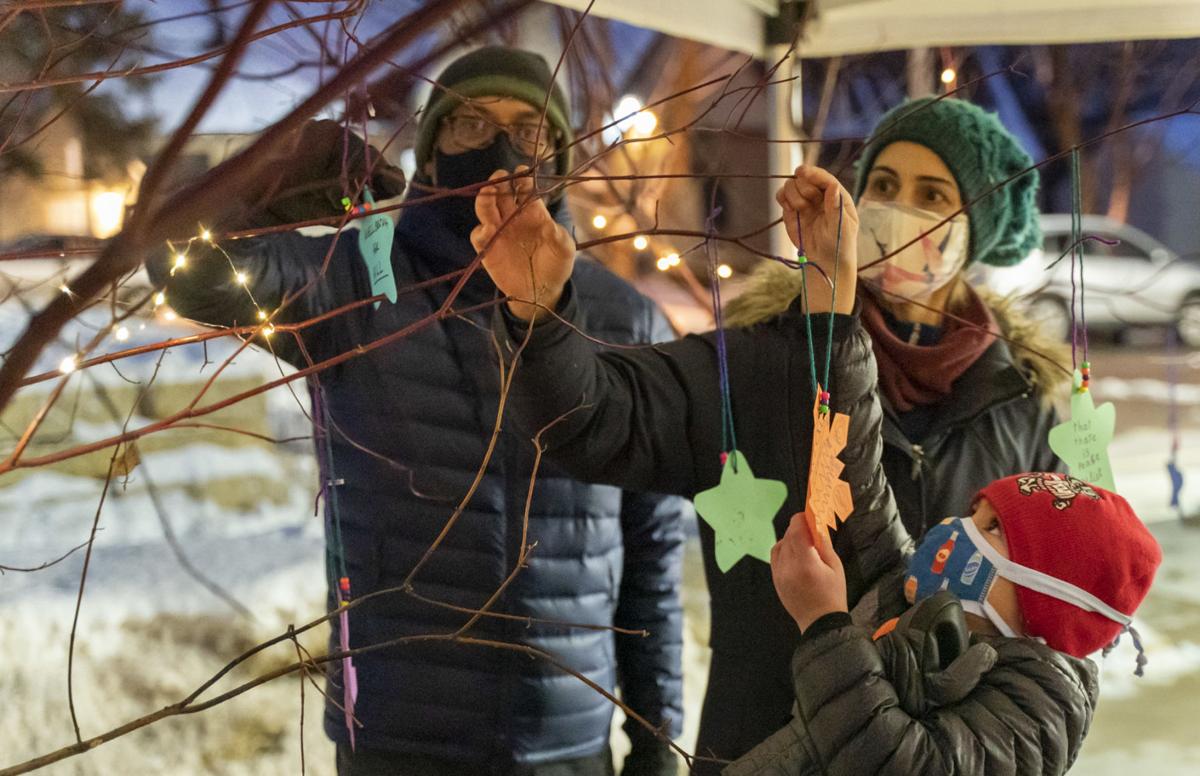 Kindergartner Taiyo Gilchrist and his parents, Steve Gilchrist and Julie Jarvis, hang ornaments at the Wingra School's winter solstice gathering. People wrote wishes on star-shaped pieces of paper and hung them on branches for others to read.

The winter solstice — a time to celebrate light and rebirth of the sun on the longest night of the year — took on new meaning this year for Wingra School.

In anticipation of today’s winter solstice, Wingra families walked with candles on a spiral path outside the school beneath a crescent moon on Thursday and Friday.

“It is a time to obviously honor the changing of the seasons and the year and we are preparing to leave for winter break,” said Debbie Millon, head of the school. “(This year) we are in pretty dark times.”

Given the “dual pandemic of COVID and systematic racism,” Millon said she hoped walking the path would be an opportunity to think about connections with others and acknowledge that no one is separated from the work of dismantling racism.

“You have that candle and you have that moment of silence with yourself to consider who you are and your role in the world and how we’re all connected,” she said. “What would it mean for Wingra School to walk that spiral ... to examine ourselves as a school and our role in the world. ... I hope that we are all in this together. We all need to look inward and outward.”

This was the Near West Side school’s fourth annual solstice event. It is normally held in a Wingra gym but this year was moved outside because of the COVID-19 pandemic. All of the school’s kindergarten through eighth-grade students are learning online, but teachers have found ways to meet up outside to maintain connections. To keep numbers manageable for the solstice event, families signed up for specific time slots.

The path was formed by placing evergreen boughs in a spiral shape and lit candles were set in the middle. Participants walked with an unlit candle inserted in a cored apple to the center of the spiral. There they lit their candle before walking back and placing their candle somewhere along the spiral, which became increasingly illuminated.

“It’s an experience I am glad I had,” said eighth-grader Jordan Horn, who is new to Wingra this year.

As she walked with her father, Charlie, Jordan thought about her grandfather who has passed away.

“It’s funny because I was thinking about the same thing,” Charlie Horn said.

Fourth-grader Celia Ehrhardt has participated in the spiral walk before and figured this year it would be an online event.

“It’s the first time I have gotten to hold a candle,” said kindergartner Alistair Fagan.

Because the event was held outside, Wingra was able to leave the spiral walk set up for the neighborhood to walk it on their own as a meditative activity without candles.

Also new this year was an area where people could write a wish on a star-shaped piece of paper, hang it on a branch and read other people’s wishes.

“Lighting a candle and making a wish is a way to bring some light, some hope and some connection to the world,” Millon said.

Megan Sandrock, fourth- and fifth-grade teacher at Wingra, introduced the spiral walk tradition after taking part in it when she worked at Madison Waldorf School.

A tradition in the Waldorf education model, the spiral walk is normally held inside at Madison Waldorf School but it also was set up outside a couple of weeks ago.

Itzel Butcher, kindergarten lead teacher at Madison Waldorf School, said the spiral is a symbol of looking inwardly and the light in the middle signifies “hope we hold onto.” When the spiral has many candles along it, others see the “manifestation of the whole room being lit.”

“It’s a celebration of quiet confidence, of carrying light in darkness, sharing that light with others,” Butcher said.

Sandrock said the evergreens are a symbol of life in winter and beeswax candles are traditionally used as the center candle because of the golden glow they give off and the symbolism of sweetness from honey.

Butcher said the apples represent “our heart — our own inner self.”

“I guess the apples to me, it kind of makes me tear up, they are sort of the hidden potential of the child. We only see them for a glimpse of time,” Sandrock said. “We are nourishing the seed of the child they are becoming.”

“Our youngest walker was a 3-year-old all bundled up in a snowsuit. ... I am always overcome by how instinctively they hold that fire,” she said. “I have watched children of different temperaments go through it and everybody walks the spiral the same. You have to walk it slowly.”

Sandrock said her class talked about the lessons learned in the solstice event when they met online afterward. They talked about other spirals like the galaxy, shells and fingerprints. They also looked at how the spiral offers an analogy of how the students can help others with their own bravery.

“The people who walked in later had the path all lit up for them,” Sandrock said.

“It’s the first time I have gotten to hold a candle.”

Naomi Lee and her children, second-grader Juliet and kindergartner Marcus, light their candles in a spiral walk at Wingra School to celebrate the winter solstice.

Kindergartner Taiyo Gilchrist and his parents, Steve Gilchrist and Julie Jarvis, hang ornaments at the Wingra School's winter solstice gathering. People wrote wishes on star-shaped pieces of paper and hung them on branches for others to read.