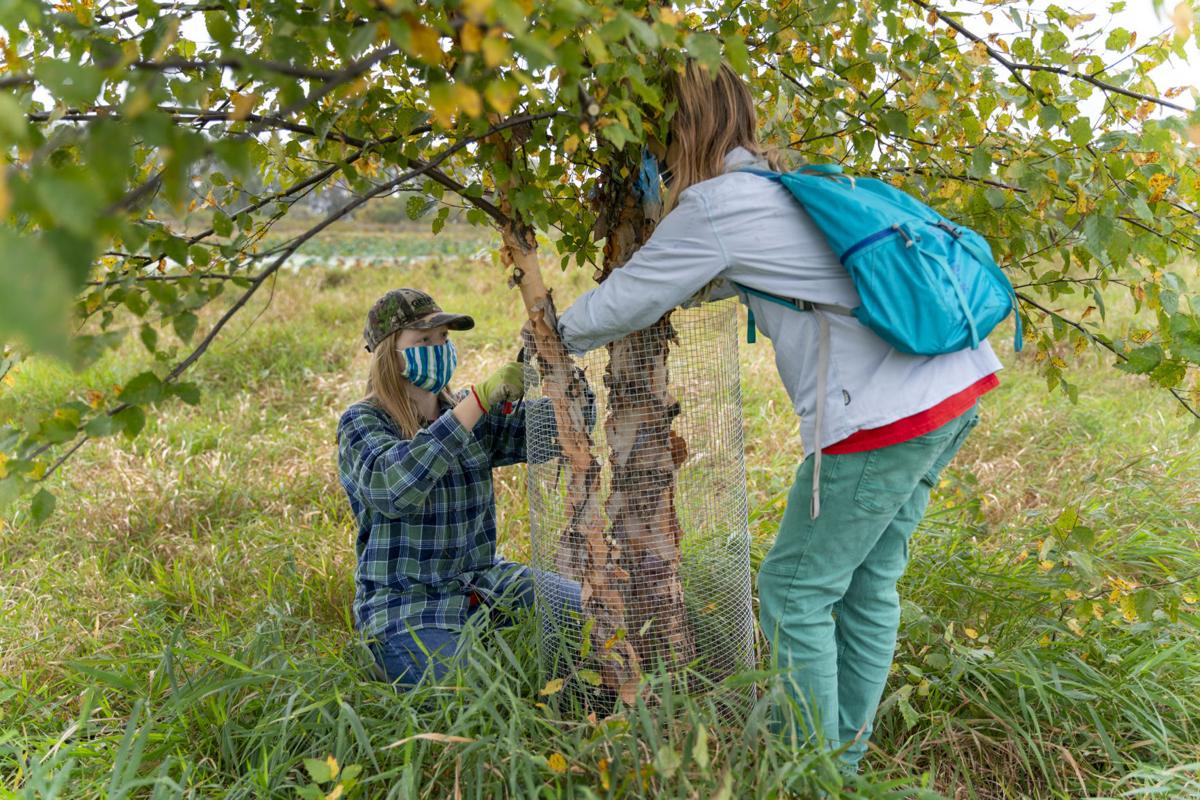 Scouts Lauren Billings, left, a 10th-grader, and Leif Gassman, a seventh-grader, work on securing a fence around a tree at Warner Park in an effort to prevent damage by beavers — without harming the animals. 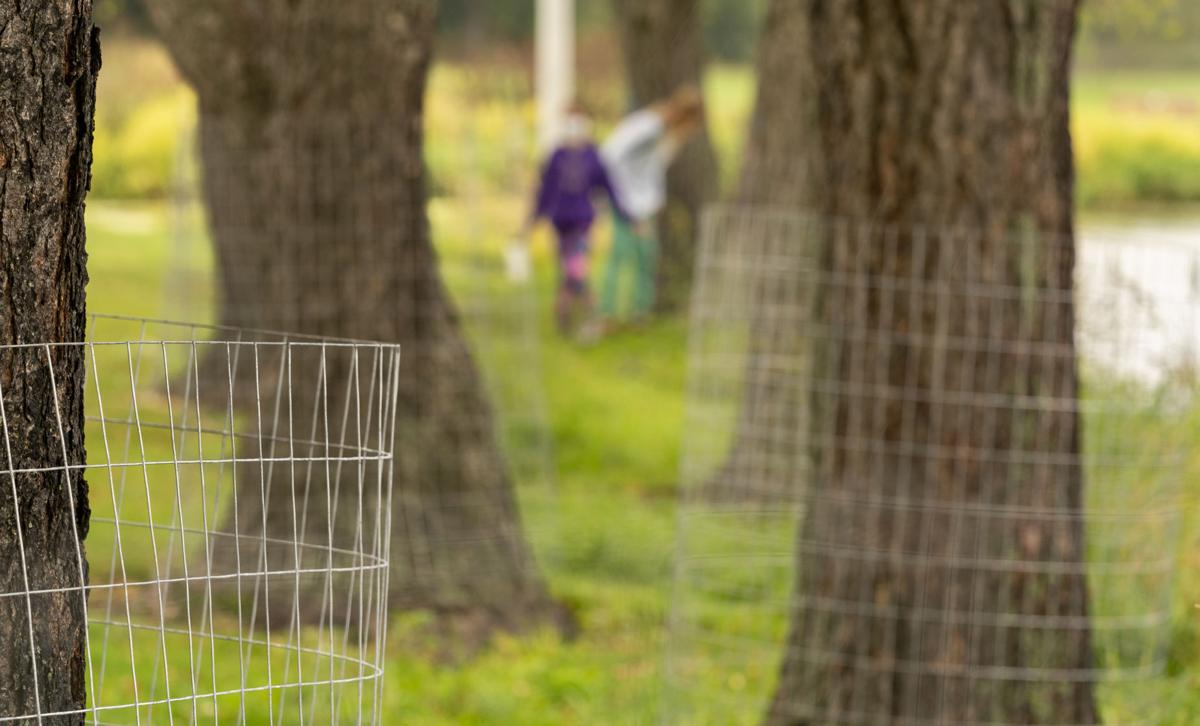 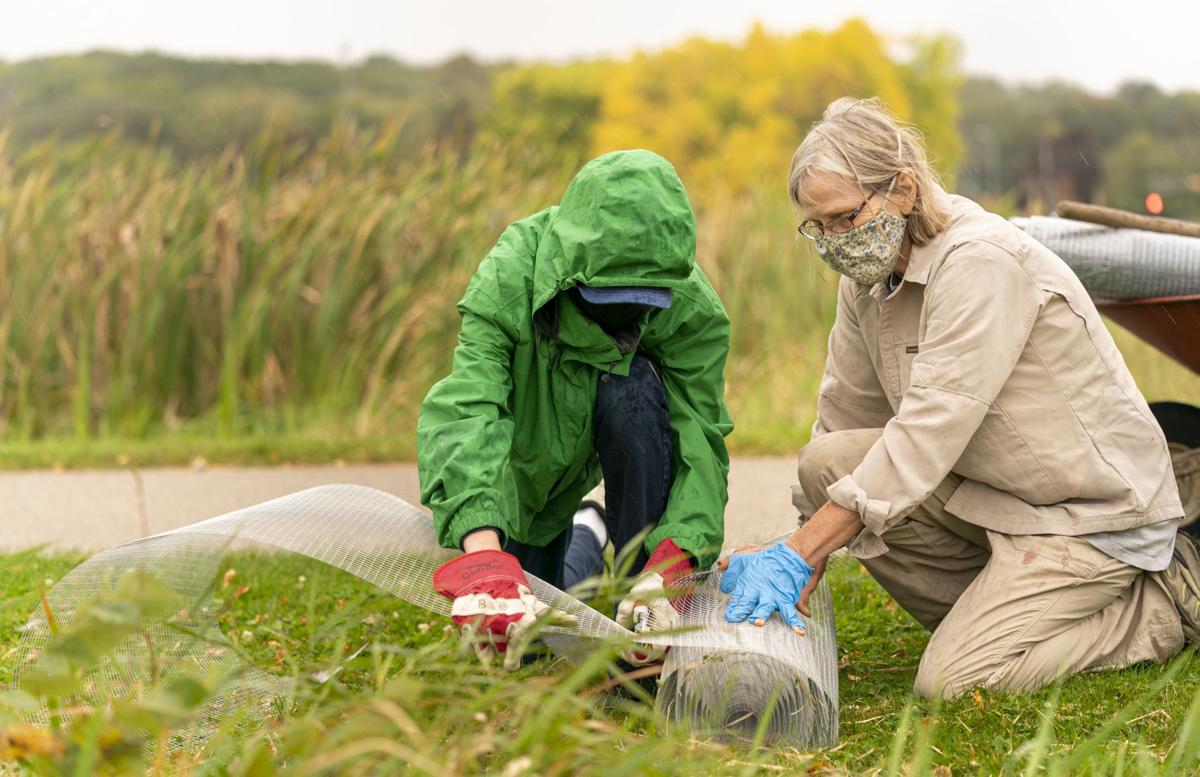 Scout Ian Kimball, left, a ninth-grader, works with Marie Jacobson of Wild Warner on cutting fencing to secure around trees at Warner Park. 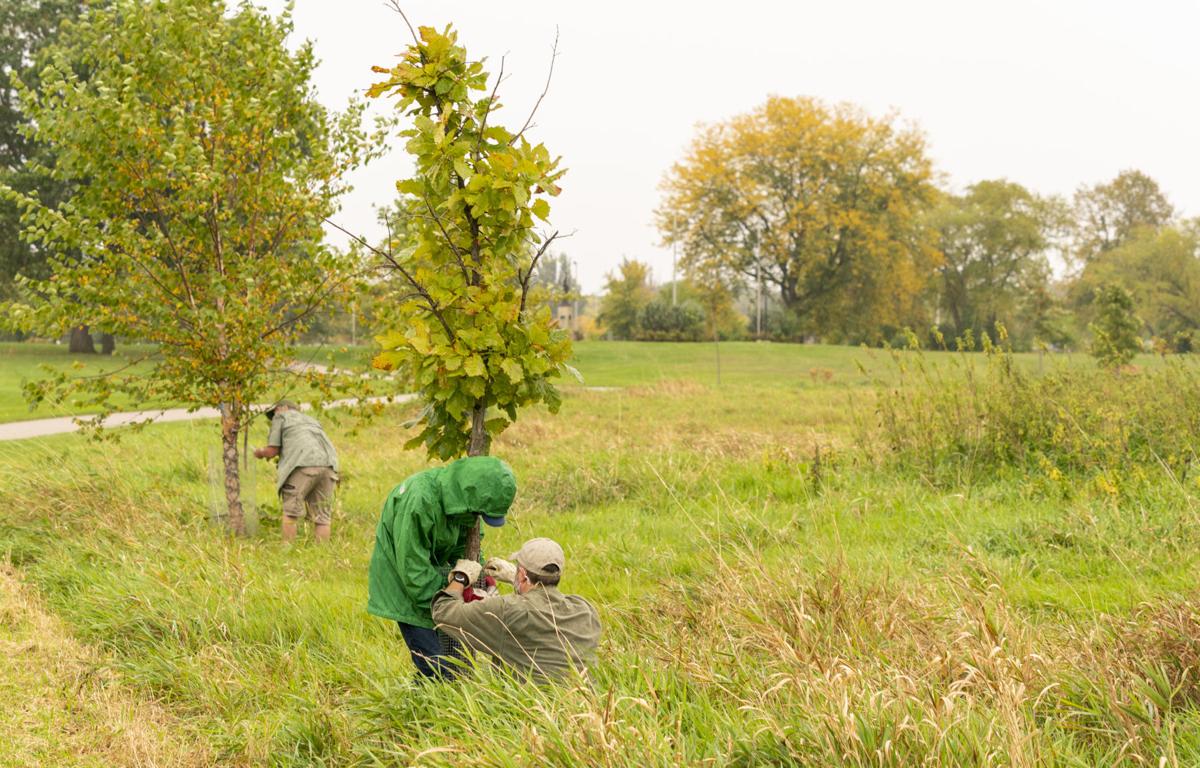 Scout Ian Kimball works with his father, Steve Kimball, on securing a fence around a tree at Warner Park.

Members of some North Side Scout troops and other volunteers installed fencing around trees in the park’s lagoon area Sunday through a project organized by Wild Warner. It’s an alternative to the controversial trapping that has been tried before to stop beavers from destroying trees.

One of the challenges of the project, however, was finding enough volunteers during the COVID-19 pandemic. It has been more difficult to get volunteers from community groups that have always worked with the organization, Jacobson said.

Then Wild Warner member Dolores Kester said she would ask Stedman Windsor-Engnell, the Scout who helps her with gardening, and he expressed interest and contacted his troop. Jacobson, whose two sons are Eagle Scouts, said she would work with the troop to organize the effort.

“It fills community service hours for these kids,” Jacobson said.

“Everybody wins,” she said. “And they live on the North Side. That is their park.”

Windsor-Engnell, a freshman at East High School, said he lives across from the park and walks his dog there often. He said Scouts need service hours, and the project fits in with the kinds of things they do, such as pulling invasive garlic mustard from the park.

“It’s a really useful (project). It needs to be done,” he said. “The beavers are here destroying the trees but at the same time we don’t want to kill a beaver.”

Windsor-Engnell is a member of Scouts BSA 127, formerly called Boy Scouts, led by Justin Sargent. Scouts BSA 7127, which is made up of girls and led by Paul Hughes, also took part.

Both troops are chartered by Sherman United Methodist Church on the North Side.

Wild Warner, which focuses on protecting the wildlife and ecosystem that exist in the large urban park, worked with the city of Madison on the project. It required close to 400 feet of fabric, which the city funded.

Then on Sunday the volunteers circled them with welded fencing, allowing enough space for future tree growth.

The project is designed to protect well-maintained areas that feature individual trees where the loss would be noticed, Rewey said. It does not target the large forested area that begins in the dog park area of Warner and the thickets of young willow trees.

The galvanized fencing is 4 feet tall to account for snow cover in the winter that makes it easier for beavers to reach the trees.

The plan for protecting the trees and the beavers came up during discussions among Wild Warner members about addressing an issue that was controversial when submerged beaver traps were set in 2017.

Beavers had caused irreparable damage to trees at the lagoon, and some trees had to be removed because their condition created a hazard. Beavers also were building dams near the outlet to Lake Mendota and that threatened to cause flooding in the park.

Animal rights activists complained that the submerged traps are cruel because they kill the beavers by drowning them, or if the animals are caught in the devices by their limbs, those that don’t drown eventually succumb to dehydration, starvation or shock.

Recommendations at the time included spraying trees with beaver-specific repellent or live-trapping and euthanizing the animals.

Rewey said applying cayenne pepper and oil repellant is not a permanent solution because it needs to be continually applied and there is some question about its effectiveness.

Wild Warner was interested in keeping the beavers because they help to provide wildlife diversity, he said.

Steve Kimball, committee chairman for both Scout troops, said it is important for youths to learn leadership and environmental ethics.

“I thought it would be a fun activity to do (to) get out of the house for today and it’s always nice to get service hours,” said Audrey Billings, an East High School sophomore and a Scout.

Her twin sister, Lauren, also a sophomore at East, said she would be able to finish a Citizenship in the Nation badge with the service hours, and she liked that she got to protect trees.

Jacobson said most of the Scouts didn’t get to go on troop outings this summer.

“Everybody wants to just feel really good, and this is a good moment,” she said.

Students can pick vegetables and fruits from the school’s gardens to eat individually, but are not taking part in shareable cooking projects.

Scouts Lauren Billings, left, a 10th-grader, and Leif Gassman, a seventh-grader, work on securing a fence around a tree at Warner Park in an effort to prevent damage by beavers — without harming the animals.

Scout Ian Kimball, left, a ninth-grader, works with Marie Jacobson of Wild Warner on cutting fencing to secure around trees at Warner Park.

Scout Ian Kimball works with his father, Steve Kimball, on securing a fence around a tree at Warner Park.