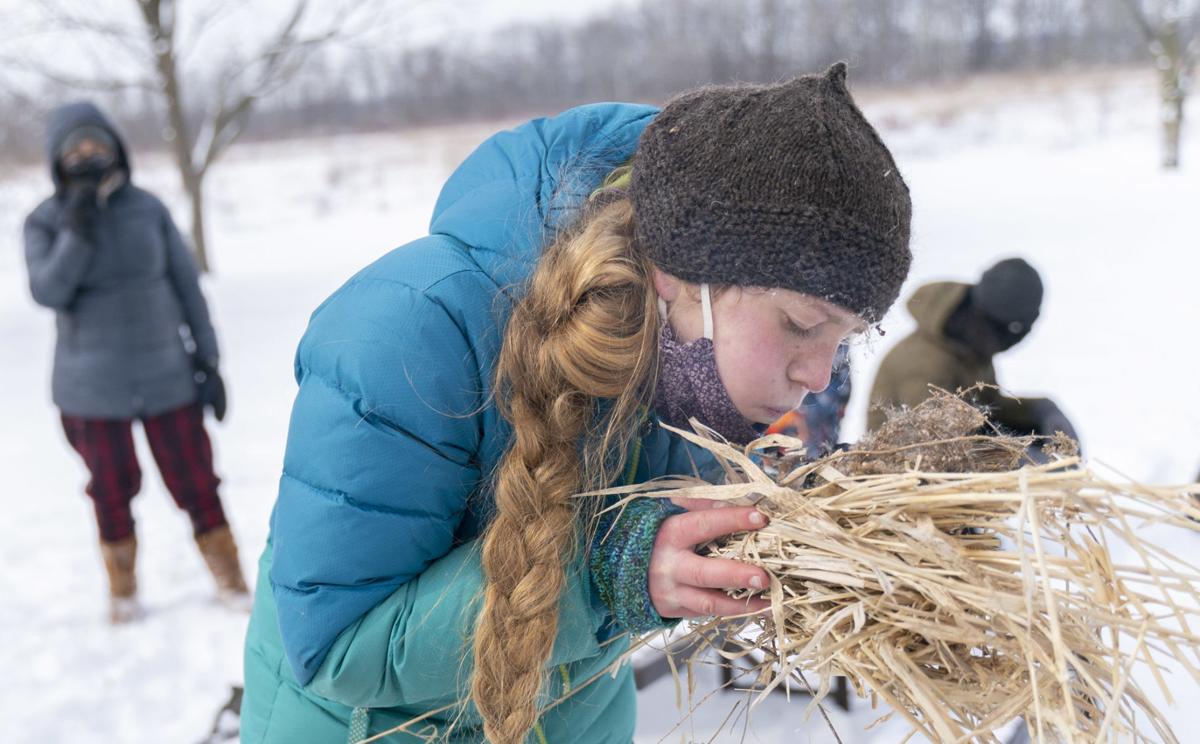 After using flint to start a fire, homeschooler and ninth-grader Laura Johnson blows on tinder to fan the flame. Students in the Wild Harvest Nature Connection program have a mentored class weekly at Lake Farm County Park. 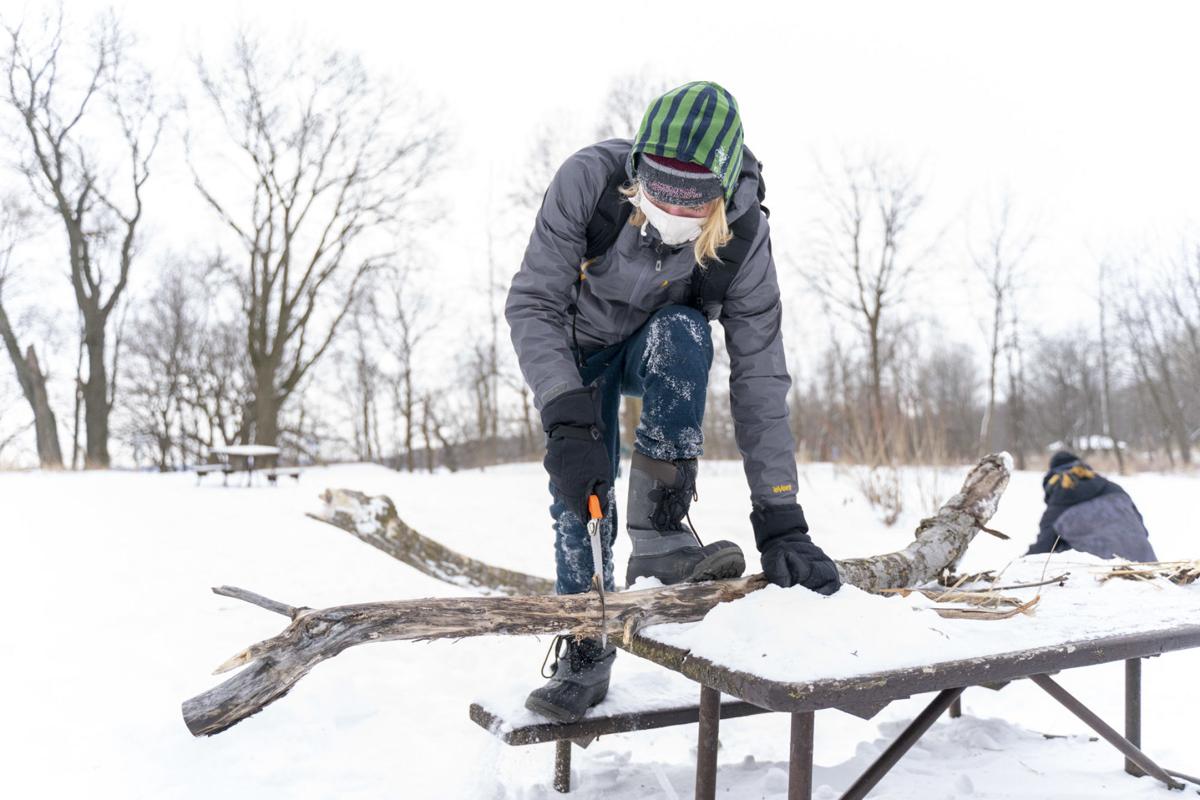 Homeschooler and ninth-grader Freddie Callister-Craig saws wood in preparation for a fire in a pit at Lake Farm County Park. 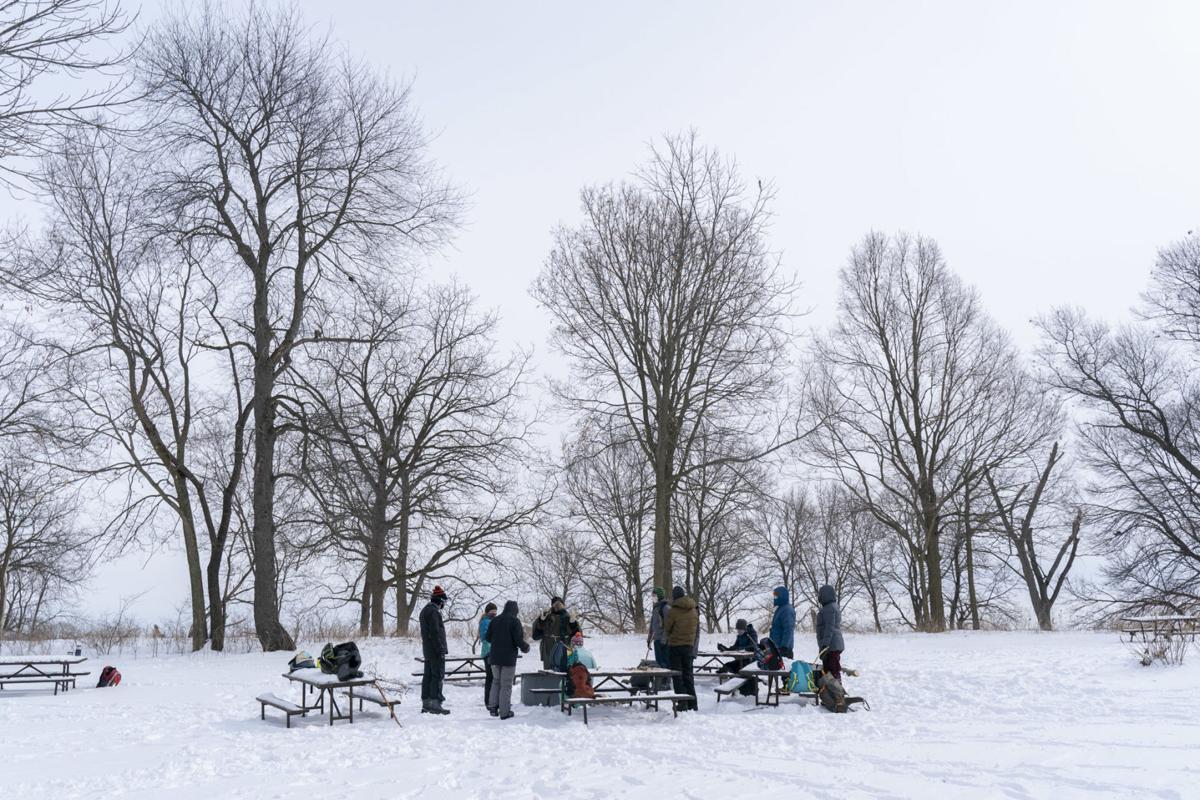 Homeschoolers in the Wild Harvest Nature Connection program gather around a fire pit to sing before eating lunch at Lake Farm County Park. 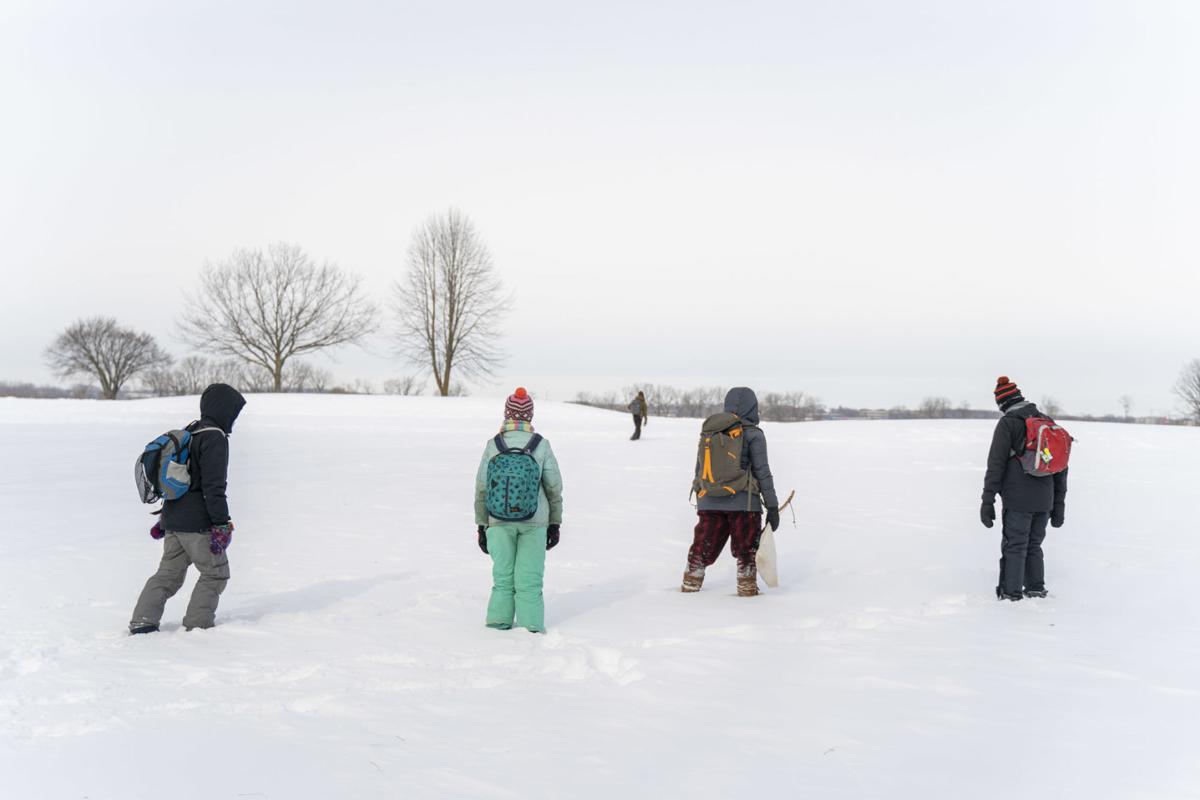 The temperature was hovering around 2 degrees and frost was in her hair, yet Sena Pollock didn’t seem fazed about the prospect of spending six hours learning outside.

“My feet are cold right now and I don’t like that, but once we get to group camp we’ll probably play a running game and I’ll warm up,” said Pollock, an eighth-grader. “We play a lot of really fun games.”

Other students at Lake Farm County Park on Thursday also mentioned running games as a key for surviving during the weekly program at the park for homeschoolers.

Another component was the fire built at a group campsite midday. Creating fire by friction was another testament to the hardiness of this group of students ages 12 to 16. Ninth-grader Freddie Callister-Craig worked hard at a hand drill, using his bare hands to spin a wooden drill-shaped piece inside a hole in a wood board as he tried to ignite some dried tinder. Smoke was produced, but it was not enough. But he enjoyed working at something difficult to do in cold weather.

“I like getting better at the hand drill so I can make fires. It’s fun to be able to do that without matches,” he said.

Eventually, flint and steel were used to start the “tinder bundle” made of materials such as dried grasses and bark and then placed in the fire ring with wood. As students worked to get the fire going, they sang a song they know as “Burn Fire Burn” as a way to motivate those taking on the difficult task.

Despite the cold, none of the nine students acted like this day was different than any other in the program that runs from September to May except for a six-week break starting around mid-December. The program is run by Wild Harvest Nature Connection.

“We’ve had colder winters than this,” said ninth-grader Laura Johnson, whose jacket was unzipped because she had just been running in a game. “It’s one of the places I can see my friends.”

Johnson is in a group called Wild Tenders, and another group for that age range was added for students in online learning programs. Wild Harvest also runs three groups for ages 7 to 11, and they’re known as Wild Explorers. Other programs include summer camps.

As the students build community and learn about the natural world, primitive skills and crafts, they build resiliency as they get to know each other under adverse conditions such as being cold or mosquito-bitten.

The program’s activities follow the seasons. In fall, the students look for acorns and mushrooms. In winter, the group spends a fair amount of time on tracking.

“It is amazing to follow a trail for two to three hours and just see what the animal did, what part of the park it accessed,” said Alex Britzius, core mentor who founded Wild Harvest with his life partner, Heather Hutchinson.

Last Thursday, Callister-Craig and ninth-grader Ren Sandretto-Chang created tracks to the group campsite that the others followed to get there. Callister-Craig said they tried to conceal their tracks as best as they could by climbing from tree to tree, jumping and walking forward and then retracing their steps.

The students also build shelters out of snow or branches and grass and look for places that are out of the wind or get a lot of sunshine.

Year by year, they learn about more plants, their edible uses and what time of year to harvest, Britzius said.

Pollock said one day the students gathered wild parsnips and different kinds of greens for their lunch.

The program is also developing a deeper relationship with the park, Britzius said. Wild Harvest plans to replace invasive species with some native plants it will receive through the Plant Dane program. The students also pick up trash. It all falls under Wild Harvest’s philosophy of leaving it better than it was found, Britzius said.

Connections with elders and ancestors are also integral to the program, and an effort is made to include them.

Janice Schreiber-Poznik, who is called “Grandma Janice” by the students, serves in an elder role. She arrived at the park Thursday wearing a wool blanket that she is starting to fashion into an anorak jacket. It had buttons but no sleeves yet.

“It actually kept me warm,” she said. “It’s so cold by the lake with the wind.”

Schreiber-Poznik, who has seven grandchildren, is a longtime educator and a pioneer in the outdoor education field in Madison, where she ran a program based in Hoyt Park for years.

Grant Abert, known as “Grandpa G,” also serves in an elder role. Abert has training in nature awareness, wilderness survival and tracking, and has gone on wilderness retreats. He said it’s important to understand the connections between all of life and with our elders and ancestors.

“Part of this whole effort of reconnecting in nature and making kids comfortable in nature is also revitalizing the role of elder,” Abert said.

A member of the Beaver Dam Unified School Board resigned last week, citing safety concerns by his family amid controversy over the mask mandate in the district.

The student said the district ignored her and her mother's complaints about multiple sexual assaults and years of racial discrimination.

“This is my first time meeting a goat in person,” second-grader Jae’Quan Robinson said. “The goats are cute and they’re good at climbing.”

Founder Uchenna Jones recalled times where she’s been run off the road by cars or cyclists. It makes the decision about where to run an intimidating one.

After using flint to start a fire, homeschooler and ninth-grader Laura Johnson blows on tinder to fan the flame. Students in the Wild Harvest Nature Connection program have a mentored class weekly at Lake Farm County Park.

Homeschooler and ninth-grader Freddie Callister-Craig saws wood in preparation for a fire in a pit at Lake Farm County Park.

Homeschoolers in the Wild Harvest Nature Connection program gather around a fire pit to sing before eating lunch at Lake Farm County Park.