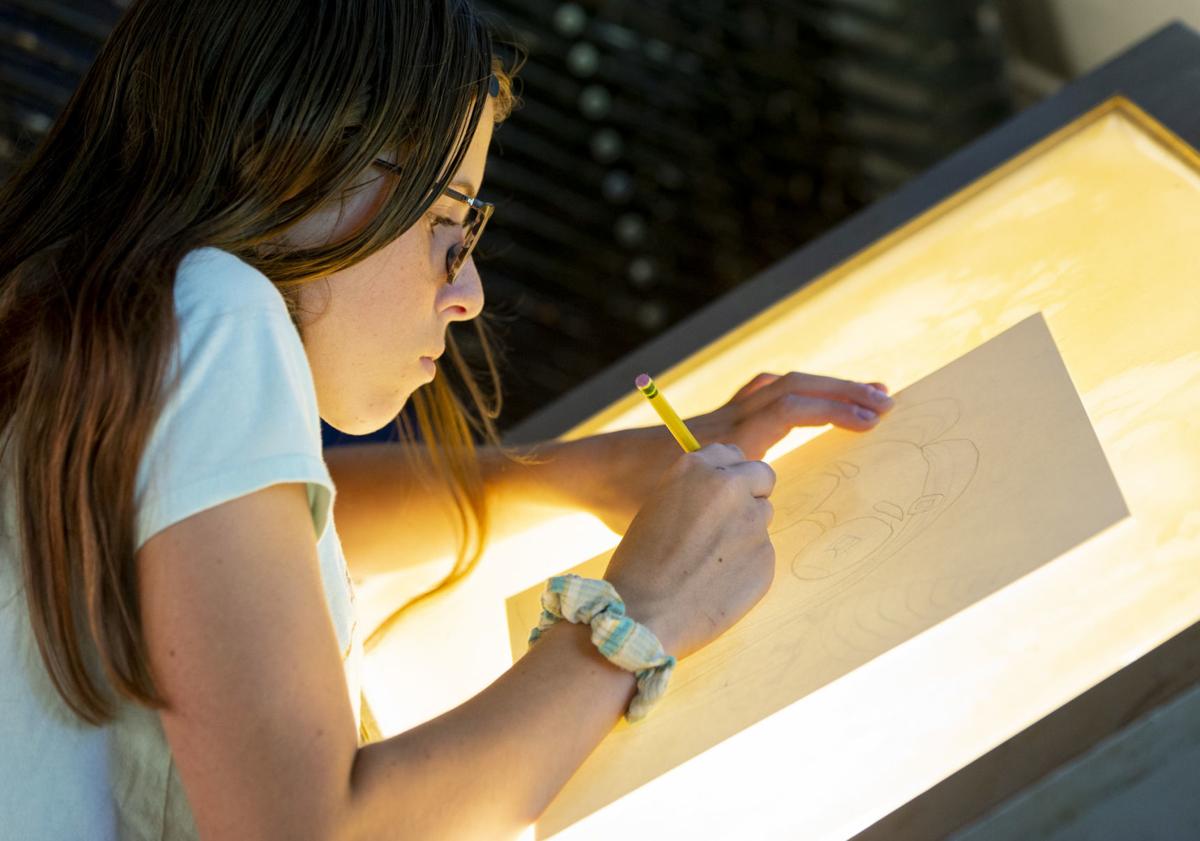 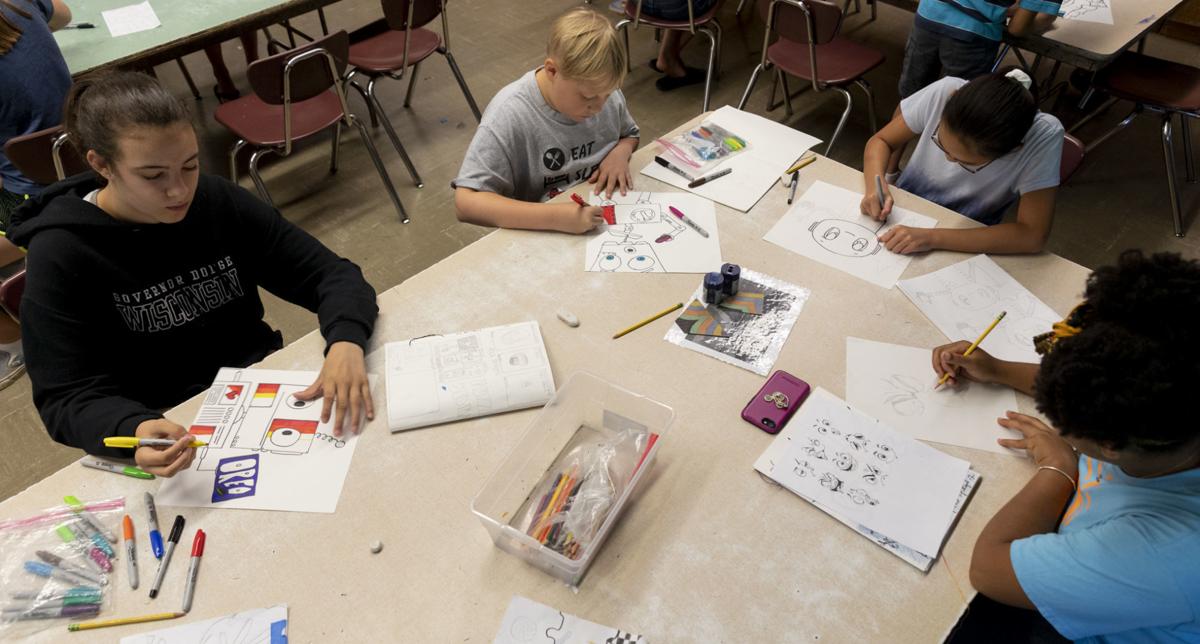 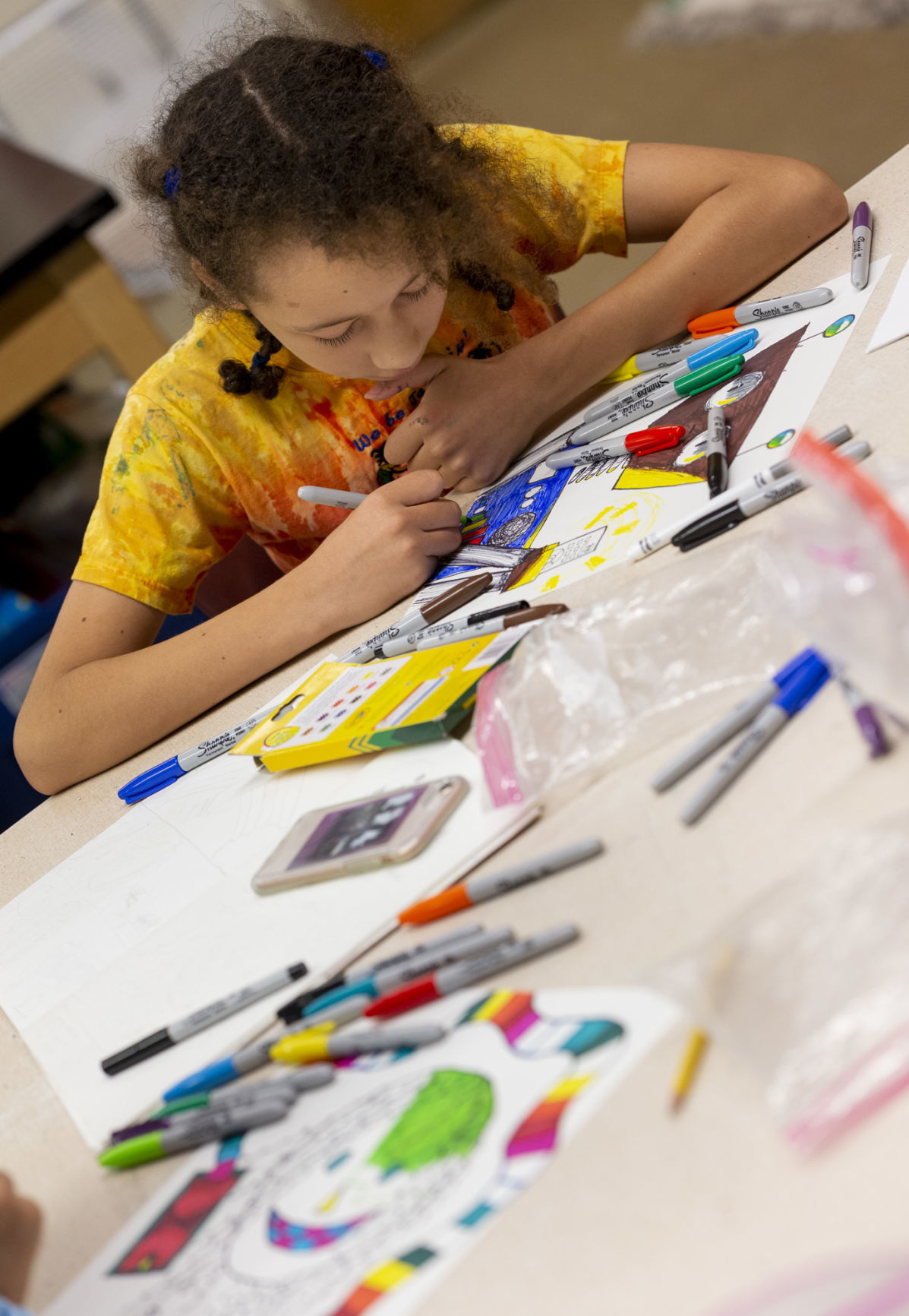 Toki Middle School sixth-grader Mable Miller works on drawing a portrait of herself as a robot.

“Creative You (CR8TV U) Art Camp” is billed as a camp for the student who “wishes that art class could last all day.”

That pretty much sums it up for Finn Emond, a sixth-grader at Sennett Middle School, who even brought some of his own three-dimensional paper craft projects to work on during free time.

“Art is my favorite thing, basically,” said Finn, who was taking his fifth week-long session of the camp a couple of weeks ago at Hamilton Middle School. “It’s basically my favorite camp now.”

The camp, which is run by Madison School & Community Recreation, provides an opportunity for campers of all experience levels to explore different mediums and improve their artistic skills. Campers produce five to seven art projects throughout multiple sessions, culminating each Friday in the Camp Showcase, which parents can attend.

In addition to exploring the world of art, campers take breaks for classic camp games and local field trips that are sometimes art-related. For example, campers this summer went to a stained glass studio where they made glass pendants.

The camp for sixth- through ninth-graders was held for six sessions this summer and each week had its own theme. The last session, which Finn was taking, was called “Imagine It, Create It.” Campers created cartoon characters, explored mixed media projects and used nontraditional materials to bring their ideas to life.

The projects during “Imagine It, Create It” included creating a picture of what the campers thought they would look like if they were robots. They also created a cartoon title page and a puzzle that included objects and scenes that identified who they are.

Asha Shukla, a sixth-grader at Wright Middle School, said her favorite project was using a stylus to create a design on a piece of heavy aluminum and then painting it. Asha said she likes art so much that as a creative expression she has dyed her hair pink.

Zoe Winchester, a freshman at West High School, said this was her third year taking the camp.

“I liked it before and met some good people, so I wanted to do it again,” she said. “I draw every day (outside of camp).”

Other campers like Alex Kusmirek, a seventh-grader at Glacier Creek Middle School in Cross Plains, said they liked making friends at the camp.

Nolan Wang, a sixth-grader at Hamilton, said the camp was a chance to do something this summer besides using the computer and watching TV. He particularly enjoyed the field trips to an arcade and to play miniature golf.

Kris Anderson, director of the camp, said she hopes the campers learn something new and have fun while expressing themselves.

“Everybody who signs up has an interest in art,” she said. “The skill levels are varied. But the love of art is there for all of them.”

The city is looking to lease commercial space adjacent to the South Livingston Street parking garage, 111 S. Livingston St., to Arts + Literature Laboratory and give the organization a $500,000 loan.

Toki Middle School sixth-grader Mable Miller works on drawing a portrait of herself as a robot.