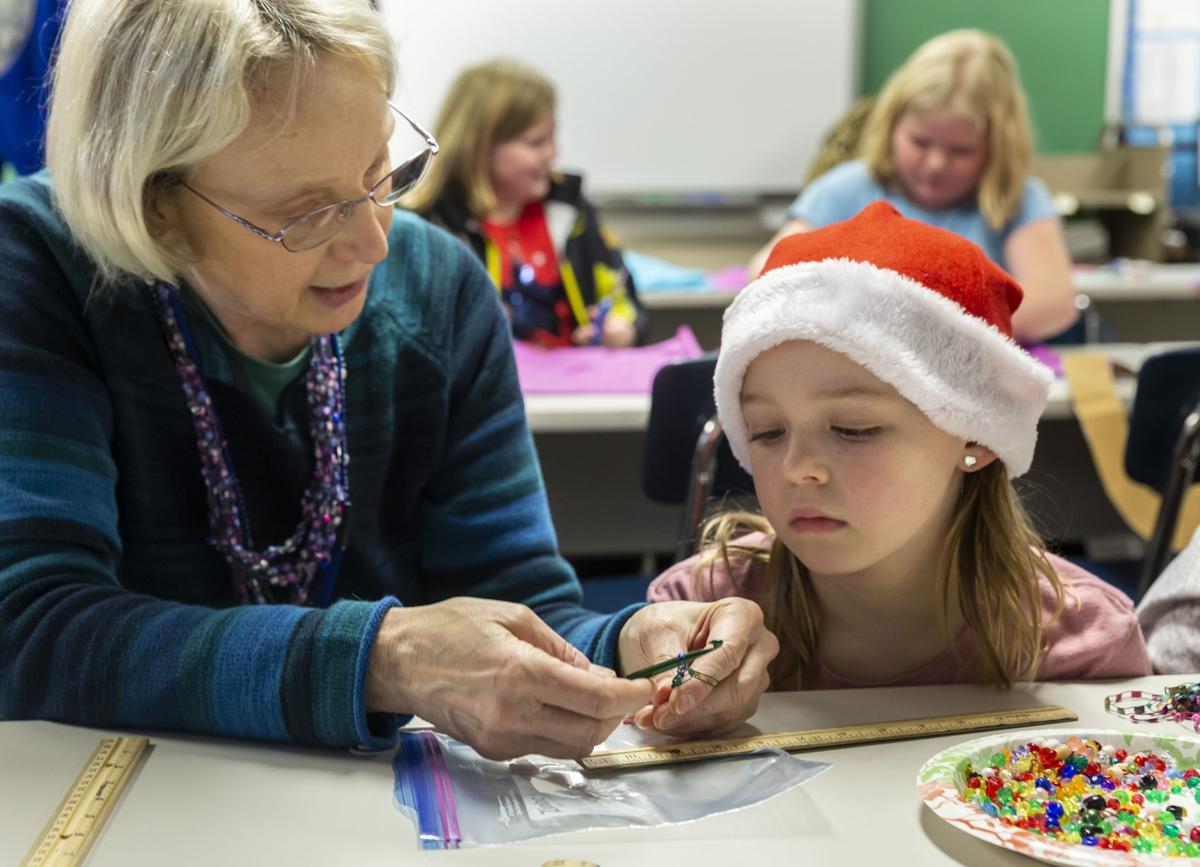 Volunteer craft teacher Sally Keyel works with second-grader Carly Kudrle on making a necklace during an after-school craft club called Crafting for a Cause at Bird Elementary School in Sun Prairie. A benefit sale will be held Dec. 12-14 if the inventory lasts with the items made in the program. 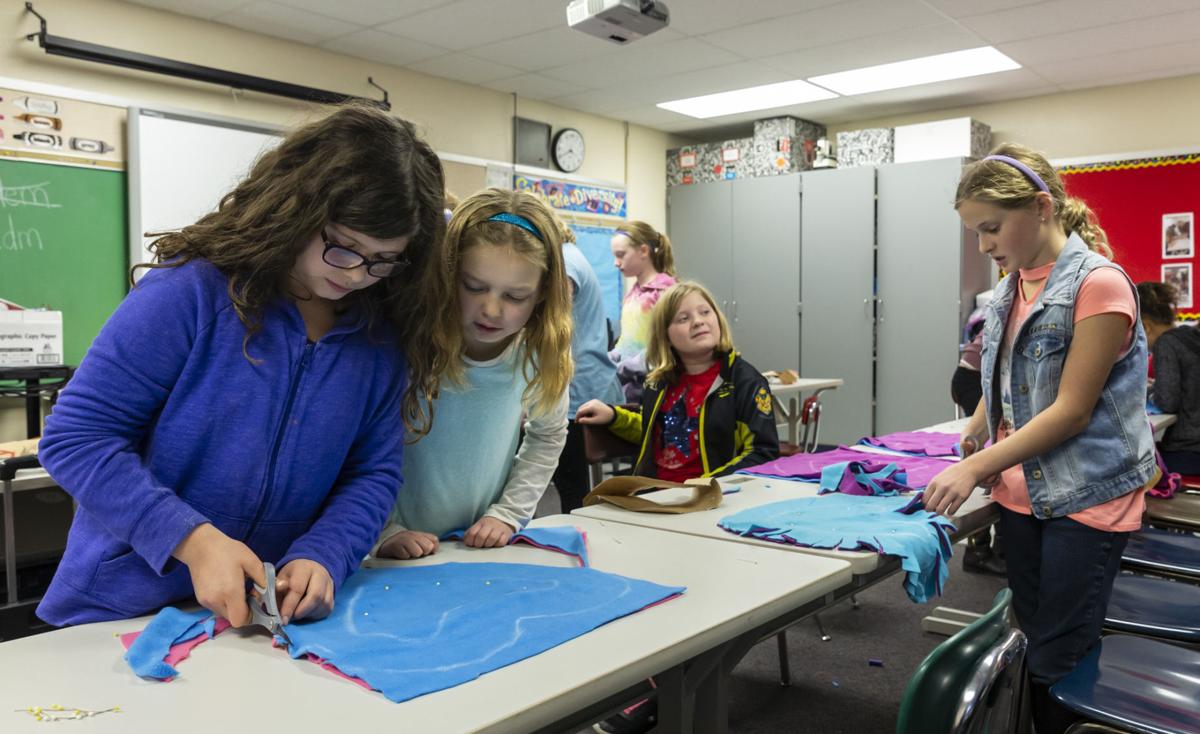 Fifth-grader Olivia Bassino, left, and fourth-grader Avayln Jones work on cutting out a heart-shaped fleece pillow during an after-school craft club called Crafting for a Cause at Bird Elementary School in Sun Prairie. 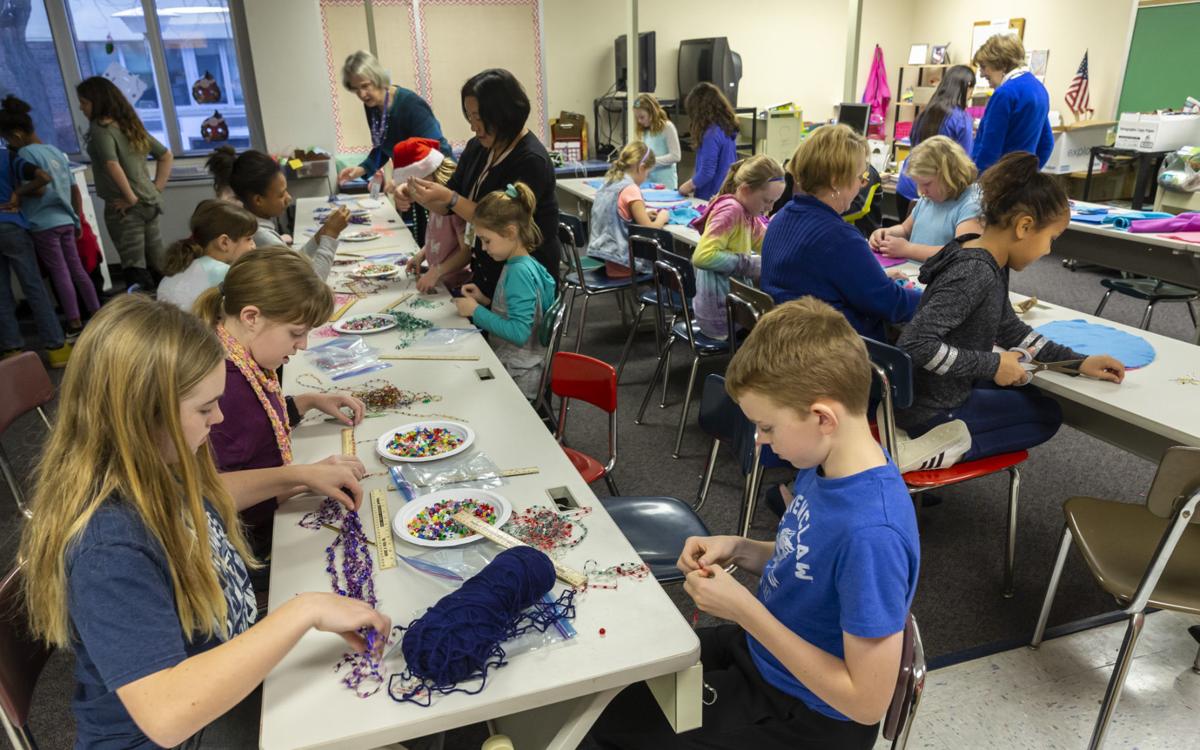 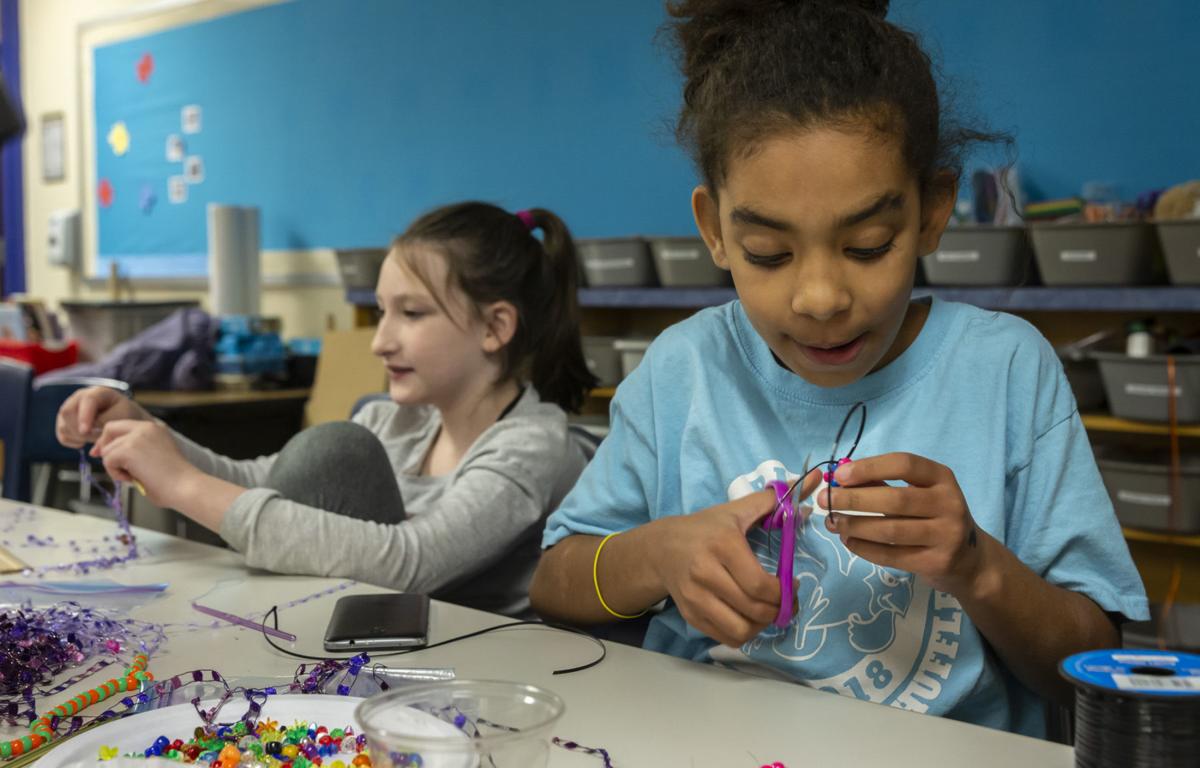 SUN PRAIRIE — What started as a handful of students showing up every week for a crocheting club is now a much bigger gathering to make crafts to benefit a charity.

Crafting for a Cause is a club held on Mondays at Bird Elementary School for mostly fourth- and fifth-graders. During lunch and recess from 10:45 a.m. to 12:45 p.m. this Wednesday and Thursday, and then again on Friday if the inventory lasts, the 28 students plan to sell crafts they have made at the school. The items run from 25 cents to $5 each.

Past sales reaped $533 that went to Shelter from the Storm, a refuge for homeless single mothers and their children.

That worked out well so the club had another sale last spring and made a little over $300, which was mostly donated to Sunshine Place and some went to the Humane Society of Dane County. Some money was also saved for supplies and the club has applied for another grant and has received some donated materials.

This time the club hopes to give the proceeds to the Sun Prairie Disaster Relief Fund to help those affected by the explosion July 10. That’s if the grant comes through so the money doesn’t have to go toward supplies.

Fourth-grader Lauryn Pederson said she likes to do crafts at home but this gives her access to many more supplies and instructions that are easy to follow, she said.

“You don’t have to go step-by-step all the way. They just tell you and then you get to do it,” Lauryn said. “I like to help people. When I learned they donate a lot of their money, I thought that was really cool.”

Sally Keyel, who has volunteered at Bird for 10 years, said that two winters ago one of the school’s instructional assistants, Xue Vang, asked Keyel if she could teach kids how to crochet and four to six students started coming every week to learn.

Vang then came up with the idea to apply for a grant from the Sun Prairie Education Foundation and recruited the help of Robin Engle, library instructional assistant, to help them apply. As part of that, Vang and Keyel decided to make it a craft club instead of just crocheting.

The club was awarded $400 to pay for supplies and the kids started making crafts, taking some home and giving some away to people who helped at the school like the crossing guard.

“I thought we should have a sale and donate the proceeds to a good cause, and it took off from there,” Keyel said.

Vang and Engle are the club organizers, and Keyel is the craft teacher.

“They’re learning crafts,” Keyel said. “At the sale, they were excited about it when they made the money. When the lady from the shelter came and talked about it, it sunk in.”

Engle said the club includes students at all academic levels and they get to vote for the organization that will benefit from the proceeds. In addition, the students learn skills like being on time and how to make change when they work the sale.

“Part of the reason we started the club is so they can have a community attachment,” Engle said.

While the club sells most of what it makes, club members are allowed to take some crafts home as a reward, Keyel said.

Fifth-grader John Kudrle said he instantly fell in love with the club once he got his hands on the craft materials.

“As soon as I hit the string, I was focused instantly,” he said. “It was being able to make things with my hands.”

His favorite craft? A little stuffed mouse made out of fake fur.

“I just have a passion for crafting,” said fifth-grader Olivia Bassino. “After we’ve had a long day at school and after our weekend, every Monday we get to come here and calm down.”

At Spring Harbor Middle School, all the world's a stage

Students studied "As You Like It" by William Shakespeare before putting on an abridged version of the production themselves this past weekend.

The Ladder program, which will be held monthly during the school year at the Health Sciences Learning Center, exposes 15 students as young as nine to opportunities in health and science careers

Toki Middle School has discovered a way to get more students to attend parent teacher conferences — invite them to be part of the preparation and conversation.

For the Oregon High School class project, now in its third year, students chose what materials they would use for cushioning in the skylight frames they were given.

Volunteer craft teacher Sally Keyel works with second-grader Carly Kudrle on making a necklace during an after-school craft club called Crafting for a Cause at Bird Elementary School in Sun Prairie. A benefit sale will be held Dec. 12-14 if the inventory lasts with the items made in the program.

Fifth-grader Olivia Bassino, left, and fourth-grader Avayln Jones work on cutting out a heart-shaped fleece pillow during an after-school craft club called Crafting for a Cause at Bird Elementary School in Sun Prairie.