MIDDLETON — On a recent Saturday at the Middleton Municipal Airport, three generations of a family talked about their first flight thanks to a new Madison-area program that gives low-income and other disadvantaged students a chance to pilot an airplane.

“I always said I wanted to take my mom and everybody on a trip,” said Caressa Cowley, 34.

While it wasn’t what she had planned, Cowley got to take a Dream Flight with her daughter, Ameria Scott, an eighth-grader at Toki Middle School. Cowley’s mother, Delores Cowley, 56, accompanied Ameria’s sister, De’aisha Scott, a seventh-grader at Toki, on another Dream Flight.

Above the Clouds, a nonprofit organization headquartered in the Boston area, is designed to bring the experience of flying to children who are disadvantaged, underserved or facing some other adversity.

The Madison chapter was the dream of Susan Schwaab, a retired United Airlines captain from Madison, who is now serving as the local director. She contacted the organization, which was started seven years ago, to express interest in the program. Its board had just voted to explore the idea of establishing chapters in other states and she felt fortunate to be the first in line to volunteer to be the first one.

The monthly flight days started in June and by the end of October, the Madison chapter will have flown about 30 young people ages eight to 18 from the Dane County area.

Schwaab said the mission statement of the organization is bringing joy and hope through the wonder of flight and the Boston-area organization has seen some go on to pursue a career in aviation.

“Really, it can almost be seen as a way to inspire kids, set them on another path if they are going through some troubles,” she said.

The students are celebrated in various ways starting with being greeted by a sign with their name as they come into the airport. Personalized posters, which feature an inspirational saying and illustrations of the children’s favorite things, hang in the room where the youth meet with the pilot about the flight plan.

The children also accompany the pilot for the preflight inspection and at some point during the 30- to 40-minute trip, they are given control of the airplane.

When they return, they are presented with a monogrammed Above the Clouds flight jacket with a pair of sunglasses in the pocket. Then they are treated to refreshments.

“They’re just beaming (after the flight),” said Schwaab, who also serves as a volunteer pilot.

Everyone involved in the program is a volunteer, including the pilots who donate the fuel.

Certain costs are being funded by the Boston headquarters but Schwaab said she will be starting local fundraising for next year.

When pilot Jamie Buchanan came back from the flight with Bryanna Montgomery, a seventh-grader at Prairie View Middle School in Sun Prairie, he said she was a natural at the controls. His wife, Tanya Buchanan, served as a volunteer down on the ground to ensure flight safety and Bryanna took up her stepmother Emily Wendt as her guest.

“Now I kind of want to be a pilot,” said Lilly Montgomery, a sixth-grader at Prairie View Middle School in Sun Prairie, after taking a flight with her father, Jovan Montgomery, as her guest.

Everett Mitchell, Dane County Circuit Court judge and pastor at Christ the Solid Rock Baptist Church, has helped identify students that could benefit from the program. He said he has seen changes in the participants firsthand. One girl, he said, who has been involved in the court system, is now back in school and doing her homework and has had no new referrals.

Editor's note: The first paragraph of the story was updated to reflect that disadvantaged students who are not low-income are also eligible to participate in the program.

Only 7% of pilots are women, according to Federal Aviation Administration data from 2018.

The "Kindness in Chalk" movement was started by Nicki Brunner, who lives in a Minneapolis suburb. 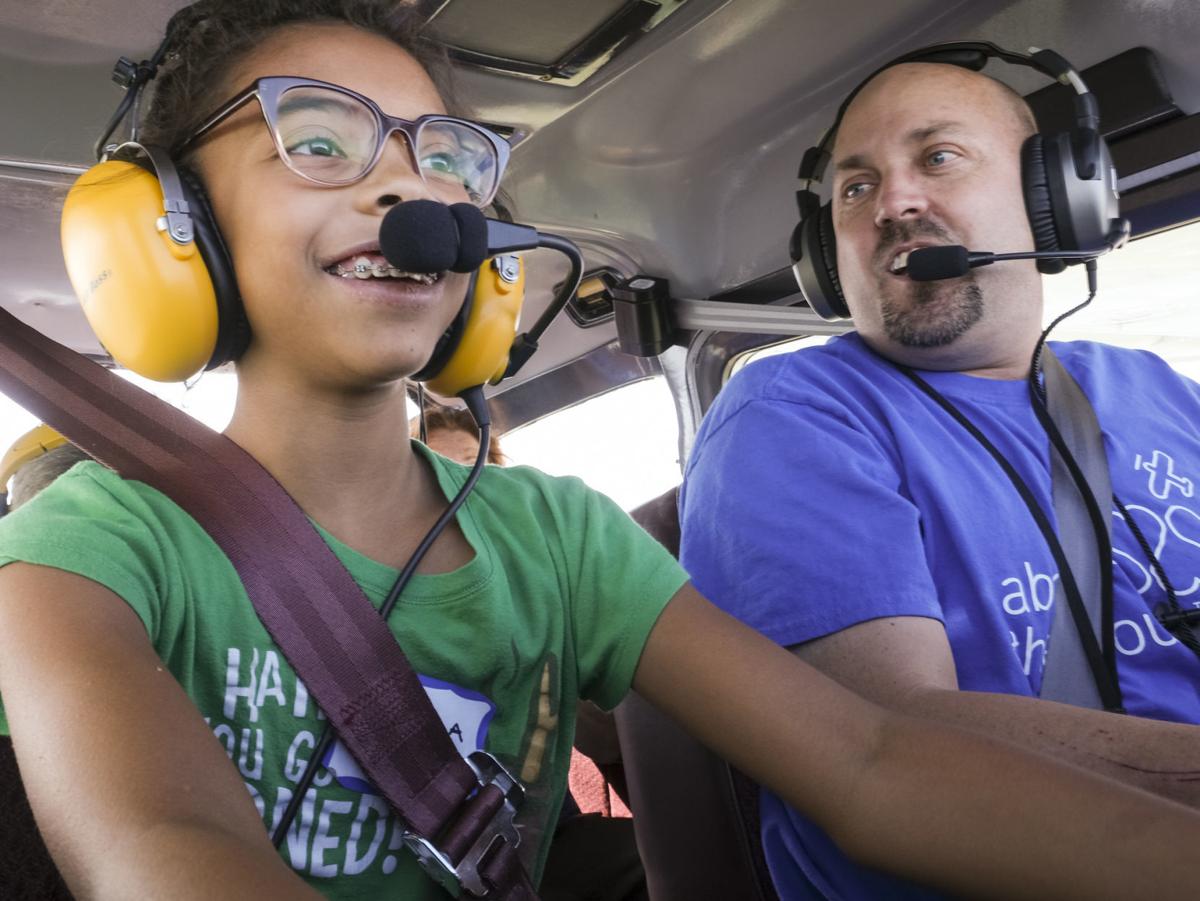 Prairie View Middle School seventh-grader Bryanna Montgomery takes over the controls of an airplane during an Above the Clouds flight with pilot Jamie Buchanan. 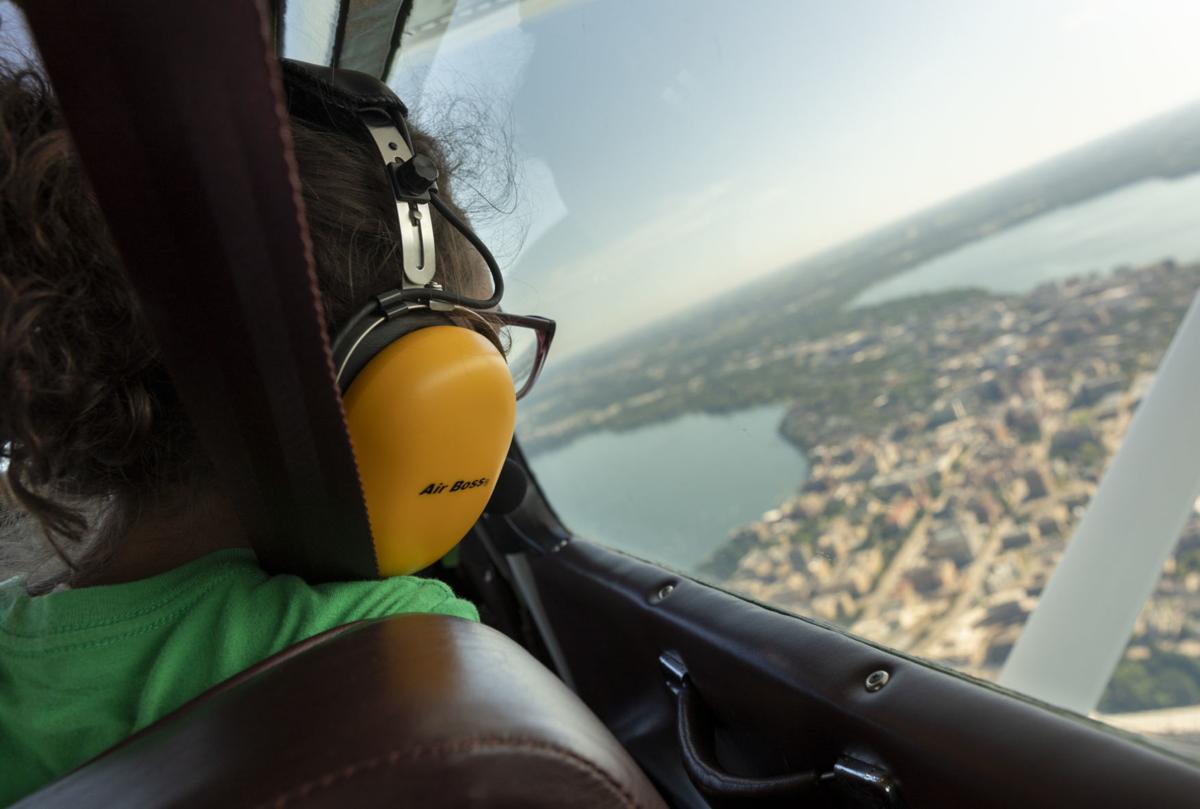 Prairie View Middle School seventh-grader Bryanna Montgomery looks out at downtown Madison during her Above the Clouds flight. 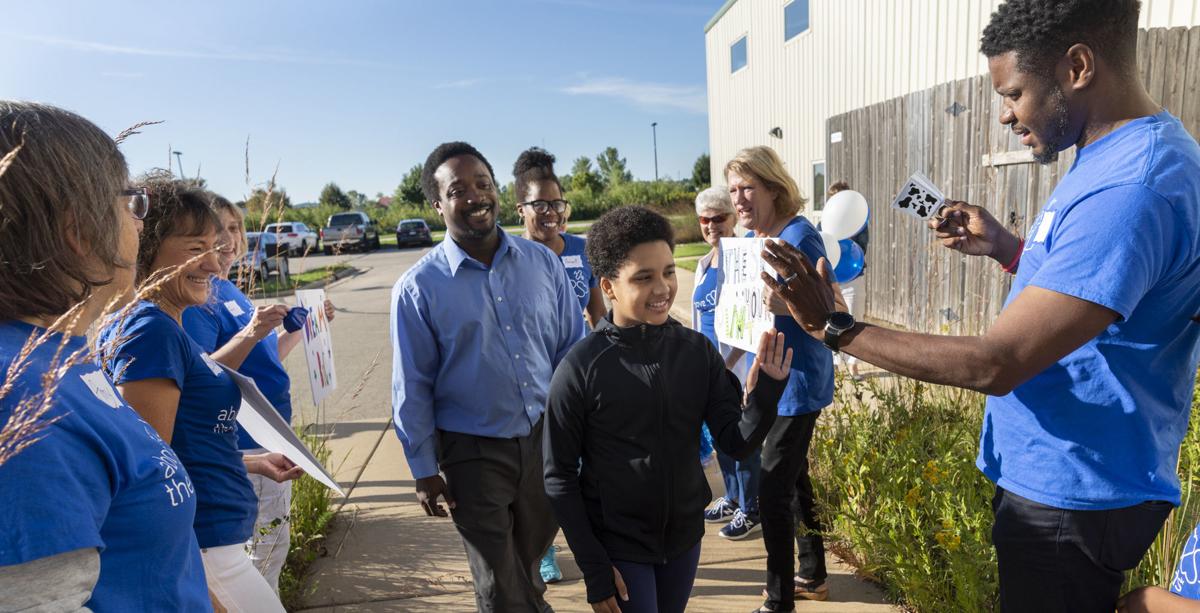 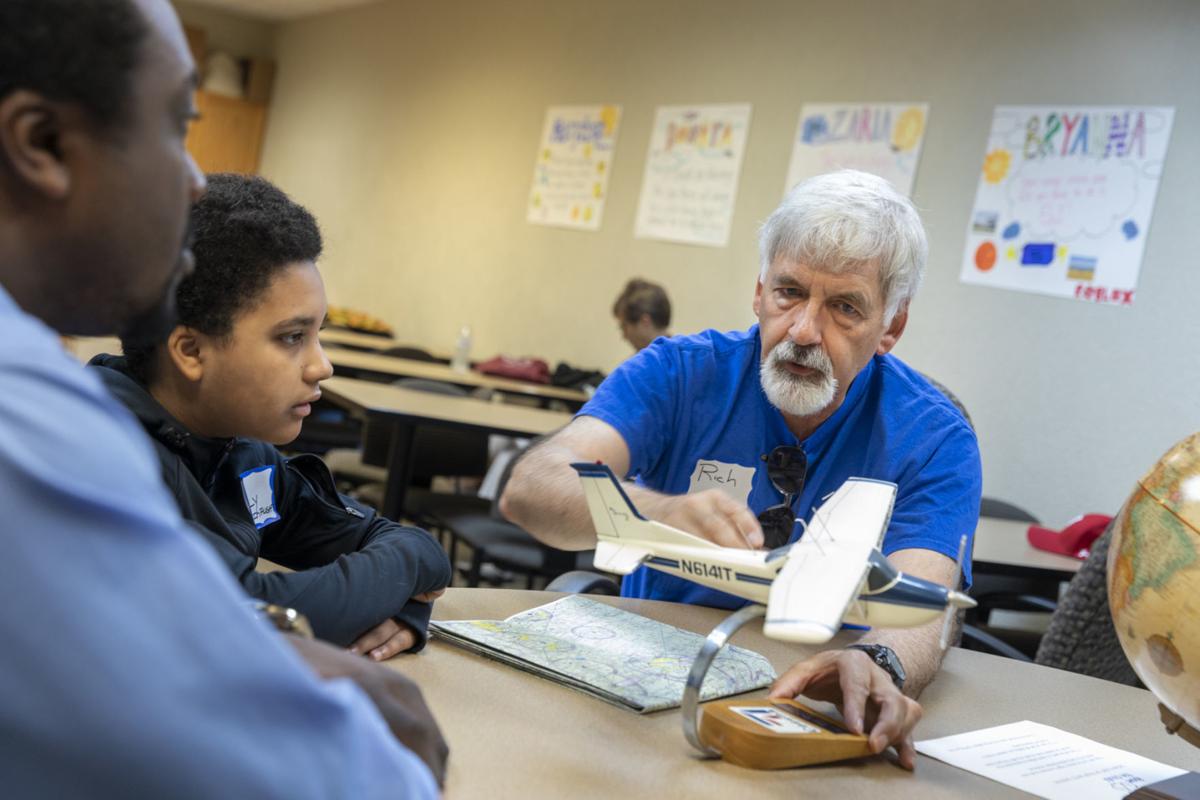 Prairie View Middle School sixth-grader Lilly Montgomery, center, and her father Jovan Montgomery get instructions on the workings of a plane from pilot Rich Morey at Middleton Municipal Airport prior to their flight with the Above the Clouds program.