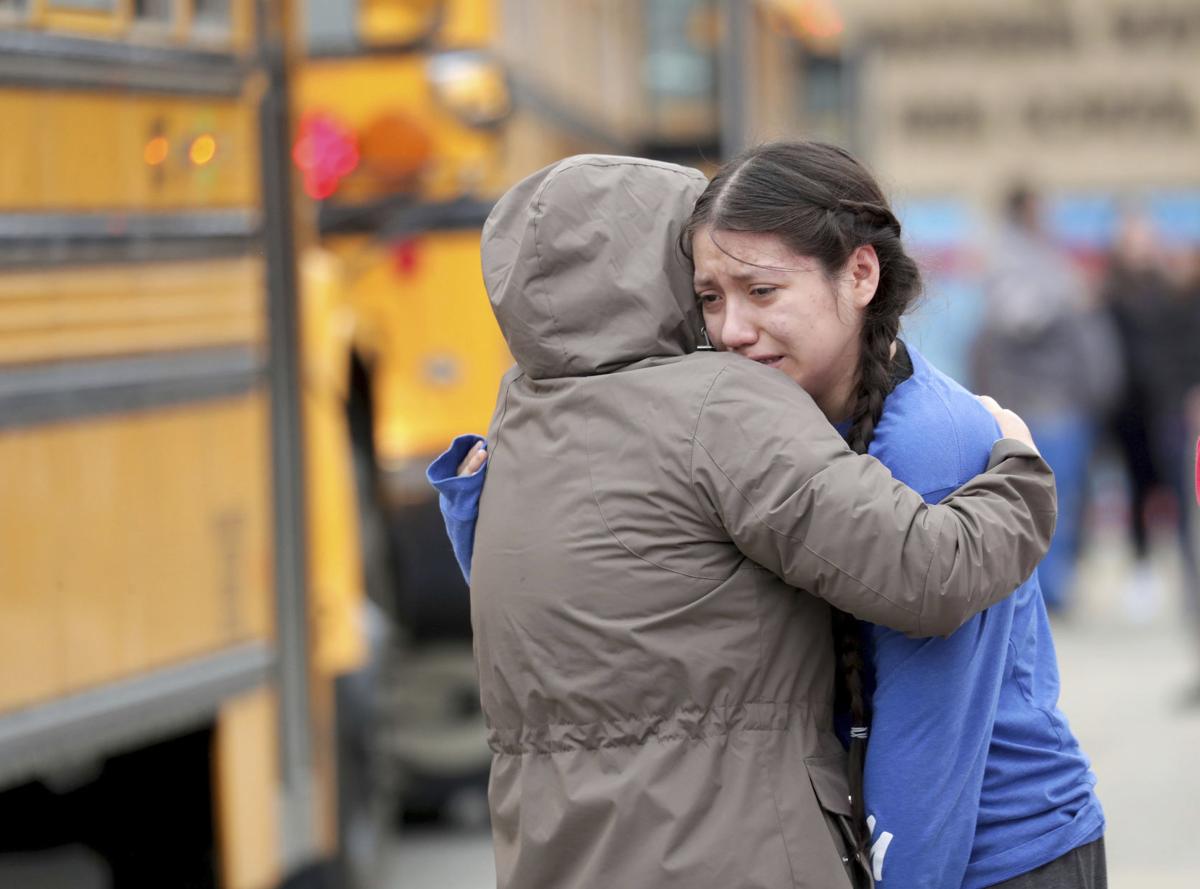 Gabriela Mauricio, a 14-year-old freshman, hugs her mother, Meche Mauricio, after the two were reunited Monday outside Waukesha South High School in Waukesha. A suspect was reported in custody after police say he pointed a handgun at officers. 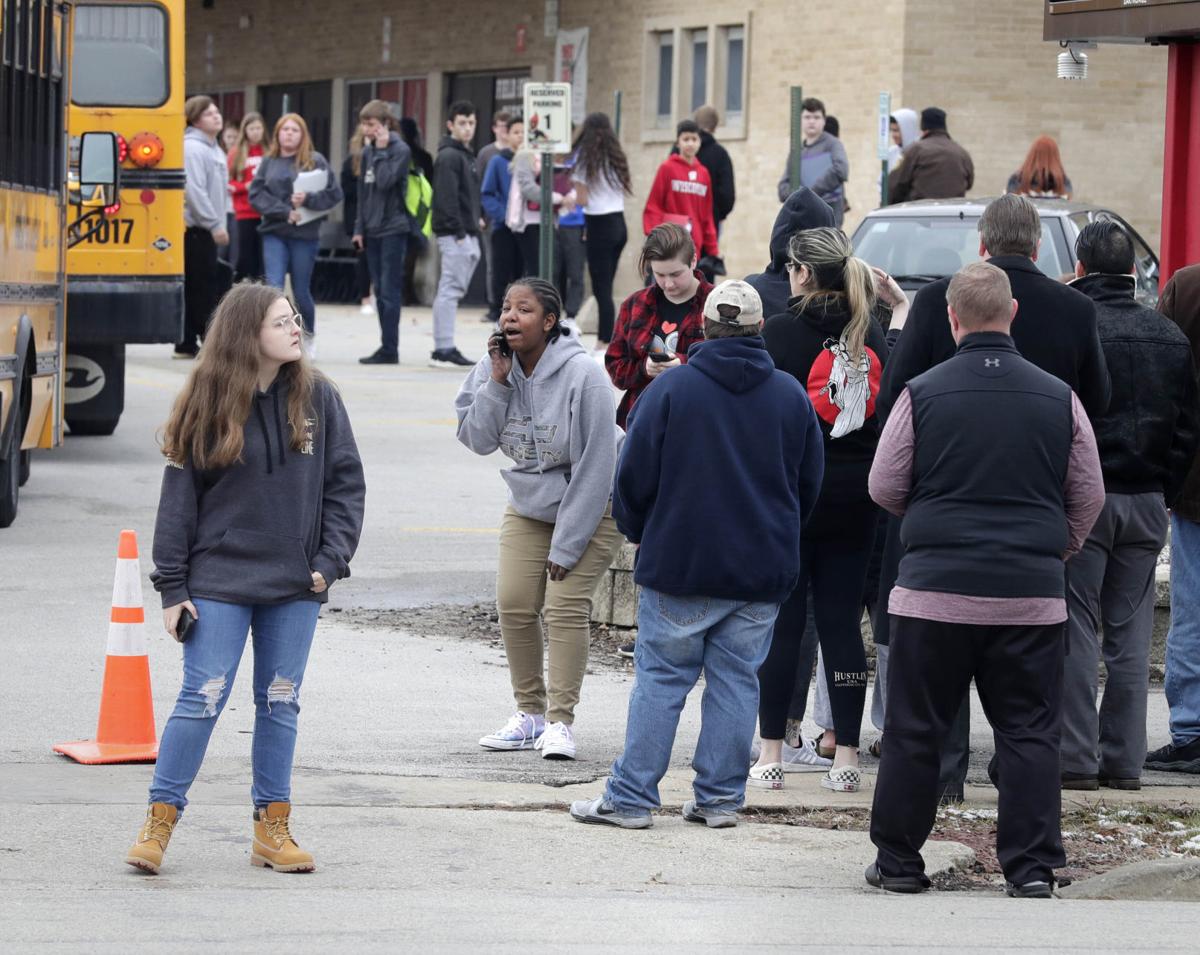 Waukesha South High School students find their waiting parents and friends after shots were fired inside the school on Monday.

MILWAUKEE — A police officer shot an armed male student in a classroom at a suburban Milwaukee high school Monday morning after the teenager pointed a gun at officers, a police chief said.

Officers performed life-saving measures on the 17-year-old Waukesha South High School student, who is in custody and in stable condition, and no officers or other students were injured, Waukesha Police Chief Russell Jack said.

Waukesha police and sheriff’s deputies soon arrived at the school and tried to de-escalate the situation to no avail.

“The suspect would not remove his hands from his pocket and continued to ignore officers’ commands,” Jack said. “The suspect removed his handgun from his waistband and pointed it at the officers. An officer was forced to discharge his firearm, striking the suspect.”

The officer who shot the student is an 11-year veteran of the Waukesha Police Department, Jack said.

Police have not said whether the student ever fired his weapon. Police said the shooting was an isolated incident and that they are not seeking any other suspects.

Andrew Oresick, 16, told the Milwaukee Journal Sentinel that he was outside his Spanish class hanging posters with other students and their teacher when they heard a commotion.

“These kids start running out from the classroom directly across from us, and one of them goes: ‘He’s got a gun,’” Oresick recalled. He said their Spanish teacher immediately got them into the classroom.

Parents gathered outside and hugged students as they streamed out of the school about 18 miles west of Milwaukee. Some students said they took cover under desks and teachers barricaded doors when a drill was announced. They told reporters outside the school that they knew it wasn’t a drill when they heard two or three gunshots.

“It was just really scary,” Alexis Grady, a senior, told the Journal Sentinel.

Waukesha North High School was placed on lockdown after a report Monday afternoon that a student had a firearm, Waukesha police said. The school resource officer determined it was possible the student was inside the school. Additional officers responded and determined the student was no longer on school property.

Officers went to the 15-year-old boy’s home. He was taken into custody without incident and a facsimile firearm was found hidden in the home, police said. No one was hurt.

In Parkland, the school’s resource officer remained outside rather than enter the building to engage the shooter and try to end the attack.

Gun-rights advocates believe having more armed educators and law enforcement in schools will help stop a shooter in his tracks. Gun-control advocates contend that arming teachers and having more guns in a school will do little to prevent school shootings and that such moves could put kids at greater risk.

An estimated 43% of public schools have an armed law enforcement officer on-site, according to a survey by the National Center for Education Statistics. The survey covered the 2015-16 school year, the most recent year surveyed. That figure doesn’t include schools with armed private security guards or teachers and administrators who carry firearms.

“These kids start running out from the classroom directly across from us, and one of them goes: ‘He’s got a gun.’” Andrew Oresick, 16, student at Waukesha South High School

"These kids start running out from the classroom directly across from us, and one of them goes: 'He's got a gun.’”

No injuries were reported, but a hunter will face charges for firing a shot that entered a neighbor’s home in Grant County on Thanksgiving, authorities reported.

No injuries were reported in the crash about 6:15 p.m. on Highway 126 in the town of Belmont, the Lafayette County Sheriff Reg Gill said in a statement.

The car was stolen shortly after 3 p.m. from 8080 Watts Road and town of Madison officers located the vehicle on the Beltline near Todd Drive about an hour later, police said.

"These girls walk in and their mouths drop open. They’re like, ‘I cannot believe I get to live here,'" said the CEO of Selah Freedom, which opened the Wisconsin home.

About 15 people were physically fighting in a restaurant, and Sgt. Nate Becker said he saw some 200 people had gathered outside looking on.

A teen was critically injured and another teen and an adult were seriously injured when the stolen vehicle they were in crashed into a tree on Saturday night, Fitchburg police reported. A fourth passenger sought medical treatment for non-life-threatening injuries.

Car recovered that was stolen after woman got out to see if she had run something over, Madison police say

The woman’s car was recovered early Saturday morning, abandoned near the scene of a home burglary in the 900 block of Blue Aster Trail, police said.

The shooting happened Tuesday morning at Oshkosh West High School, a day after another officer shot an armed student in Waukesha.

The debate about the role of armed teachers or police in schools has been a constant in the wake of school shootings across the country. But rarely have armed resource officers been able to prevent a shooting.

Gabriela Mauricio, a 14-year-old freshman, hugs her mother, Meche Mauricio, after the two were reunited Monday outside Waukesha South High School in Waukesha. A suspect was reported in custody after police say he pointed a handgun at officers.

Waukesha South High School students find their waiting parents and friends after shots were fired inside the school on Monday.