She used her district email to schedule meetings with the Danielson Group, a Chicago-based education company, about their teaching framework, often replying to messages between the district’s 8 a.m. to 4 p.m. Monday through Friday work hours. 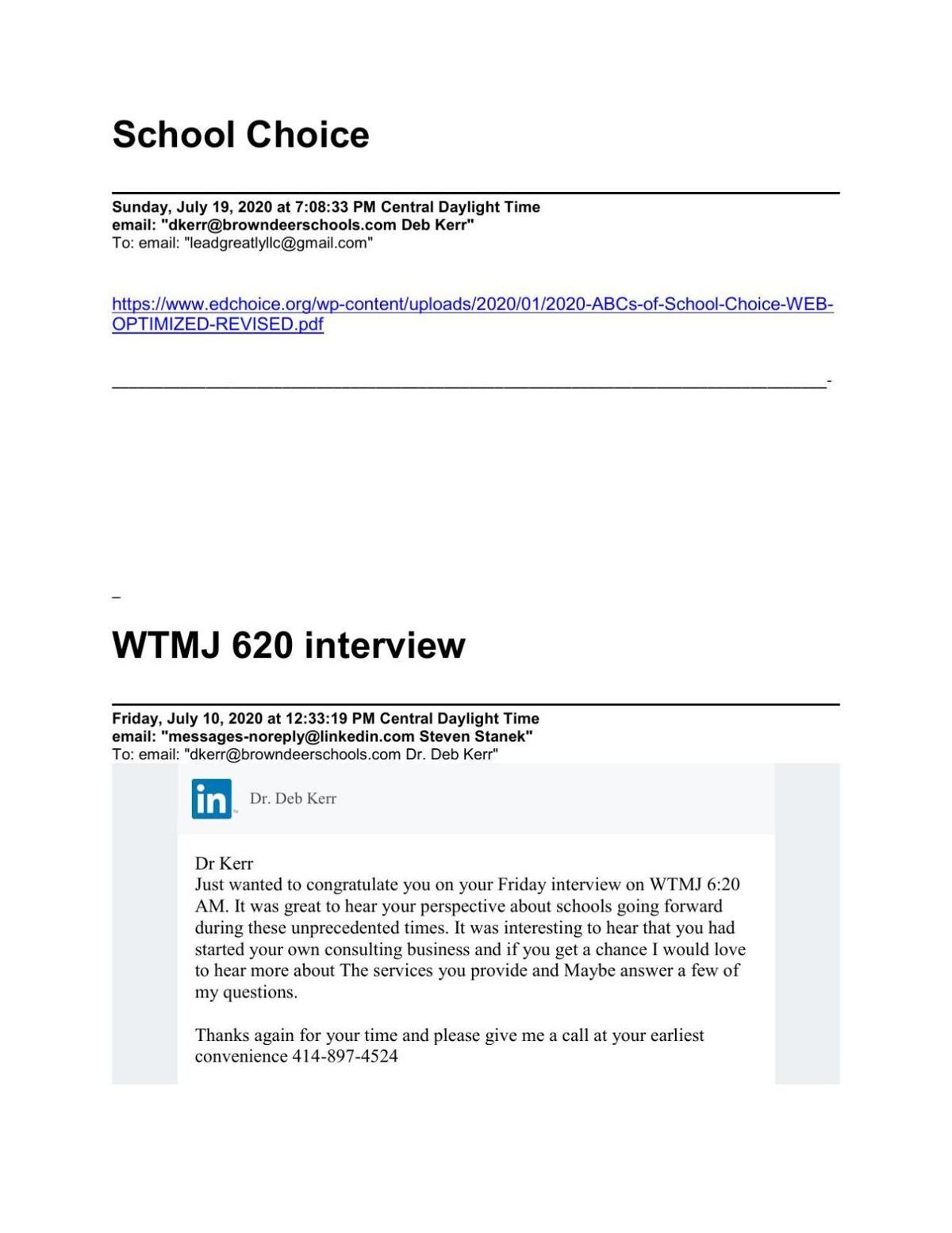 In a statement, Kerr downplayed conducting private business on public email during work time, describing it as “the limited instances where I sent a handful of emails informing contacts of my next steps as a consultant practice. A few threads in tens of thousands.”

“Over the last 13 years as superintendent to Brown Deer Schools, I proudly dedicated my time to uplifting all children,” Kerr said.

She described the graphic design work as being done by “a former executive assistant who I provided needed income to do some design work.”

An email with a group that she later worked with after her employment ended June 30 was “a result of my email (address) being public.”

Regarding another email thread from April 29, 2020, with the two school districts — in which she wrote, “My new LLC is, Lead Greatly, LLC so I am ready!” — she said the discussion was related to school district consolidation and unrelated to her private business.

“I was not paid for the discussion and do not expect them to hire me in the future,” she said.

Kerr concluded her statement by questioning whether her opponent in the April 6 election, Pecatonica Superintendent Jill Underly, was using paid time off or taking a leave of absence to campaign.

“Dr. Underly takes time off as appropriate and is still working full-time as a superintendent during this pandemic, as her schools are open for in-person learning and have been all year,” Underly campaign spokesperson Alanna Conley said in a statement. “Once again, Deb Kerr is trying to distract, point fingers and cover up her latest example in her pattern (of) misusing and mismanaging taxpayer resources.”

Kerr’s campaign has been on its heels since February, when she finished second in the primary. The same day she tweeted about being called the N-word in high school, saying “my lips were bigger than most and that was the reference given to me.” Kerr, who is white, apologized and deleted her Twitter account the next day. By the end of that week her campaign manager and attorney quit.

Earlier this week, Underly’s campaign aired an ad criticizing Kerr for writing a letter of recommendation for a finance manager who had overdrawn the district’s bank accounts by about $500,000 back in 2009.

“This is further proof that Deb Kerr can’t be trusted to manage taxpayer resources,” Conley said of Kerr working on her private business while still superintendent. “Our kids deserve a leader at DPI who has demonstrated sound fiscal judgement, not abused their position and public dollars for personal gain.”

Kerr, who worked as an educator for more than 40 years, retired from her position as Brown Deer superintendent June 30, around the same time she launched Lead Greatly. She made the decision to seek election for state superintendent in July and, if elected, she said she will put her company — which specializes in education consulting — on hold.

In an interview earlier this week, Kerr said she launched Lead Greatly to provide contracted services and education consulting for clients in the Milwaukee area with a focus on supporting and training women for leadership roles through executive coaching. Kerr initially declined to identify her Lead Greatly clients, but her campaign later said she worked with the Hartford Joint 1 and Saint Francis school districts. The campaign did not say whether she had other clients.

Candidates in the traditionally nonpartisan race for state superintendent have received support from partisan backers in the weeks leading up to the election. Kerr, who describes herself as a Democrat who voted for Joe Biden for president, has garnered financial backing from Republicans because of her support for private school vouchers. Underly has garnered an endorsement from the state’s largest teachers union, the Wisconsin Education Association Council, which supports Democrats.

Ahead of a crowded seven-person primary in February, Kerr led the group in campaign fundraising and spending. She finished second, winning 26% of votes in the primary. Underly finished first with 27% of the primary votes.

The state superintendent seat is open for the first time in more than a decade after Gov. Tony Evers, who won statewide elections to head the agency for three consecutive four-year terms, assumed Wisconsin’s highest office. Current state Superintendent Carolyn Stanford Taylor was appointed by Evers in January 2019 after he won the 2018 governor’s race. She did not seek election this year.

‘Every aspect of our lives has been turned on its head’: The COVID-19 pandemic one year on

Six of our grandchildren graduated from the Brown Deer School District where they learned to live "The Brown Deer Way."

"Agency staff are plucked from the Madison area, and that's not inclusive of any of the diversity and the needs of our Wisconsin children," Kerr said.

The candidates for state superintendent clashed over reopening schools for in-person learning, Act 10 and teacher unions and the private school voucher program during the first of two forums hosted by the Greater Milwaukee Committee in the morning and the Wisconsin Disability Vote Coalition Thursday evening.

“I was 16 in high school and white — my lips were bigger than most and that was the reference given to me,” Kerr wrote in a post that has since been removed.

Here are the results from Tuesday's spring primary

Results in the state superintendent, special legislative and other Madison-area races in Tuesday's primary. Top two advance unless otherwise noted.

Welcome to spring: Beautiful weekend for the vernal equinox for southern Wisconsin

However you define it — meteorological spring started March 1 and the vernal equinox is at 4:37 a.m. Saturday — spring will be in the air across southern Wisconsin this weekend, according to forecasters.

The Madison School District plans to keep students 6 feet apart but allow 3 feet of separation in some circumstances, after the Centers for Disease Control and Prevention relaxed its social distancing guidelines for schools Friday and said students can now sit 3 feet apart in classrooms.

Roger Scott Manthe, 46, of DeForest, died after a grain bin auger he was working on fell and hit him in the abdominal area.

SEIU Healthcare Wisconsin said nurses alleged the hospital is "wasting resources on an intimidation campaign rather than addressing their urgent concerns" as contract negotiations continue.

One City Schools to buy $12M building with large donation, expand to 4K-12

The charter announced Tuesday a $14 million donation from American Girl founder Pleasant Rowland will fund the purchase of a Monona office building as the school looks to expand to all grades by 2024.

Deborah Kerr and Jill Underly not only differ on issues such as private school vouchers, they also come from different backgrounds.

The previous record high for spending by outside groups in this race was nearly $694,000 in 2009. 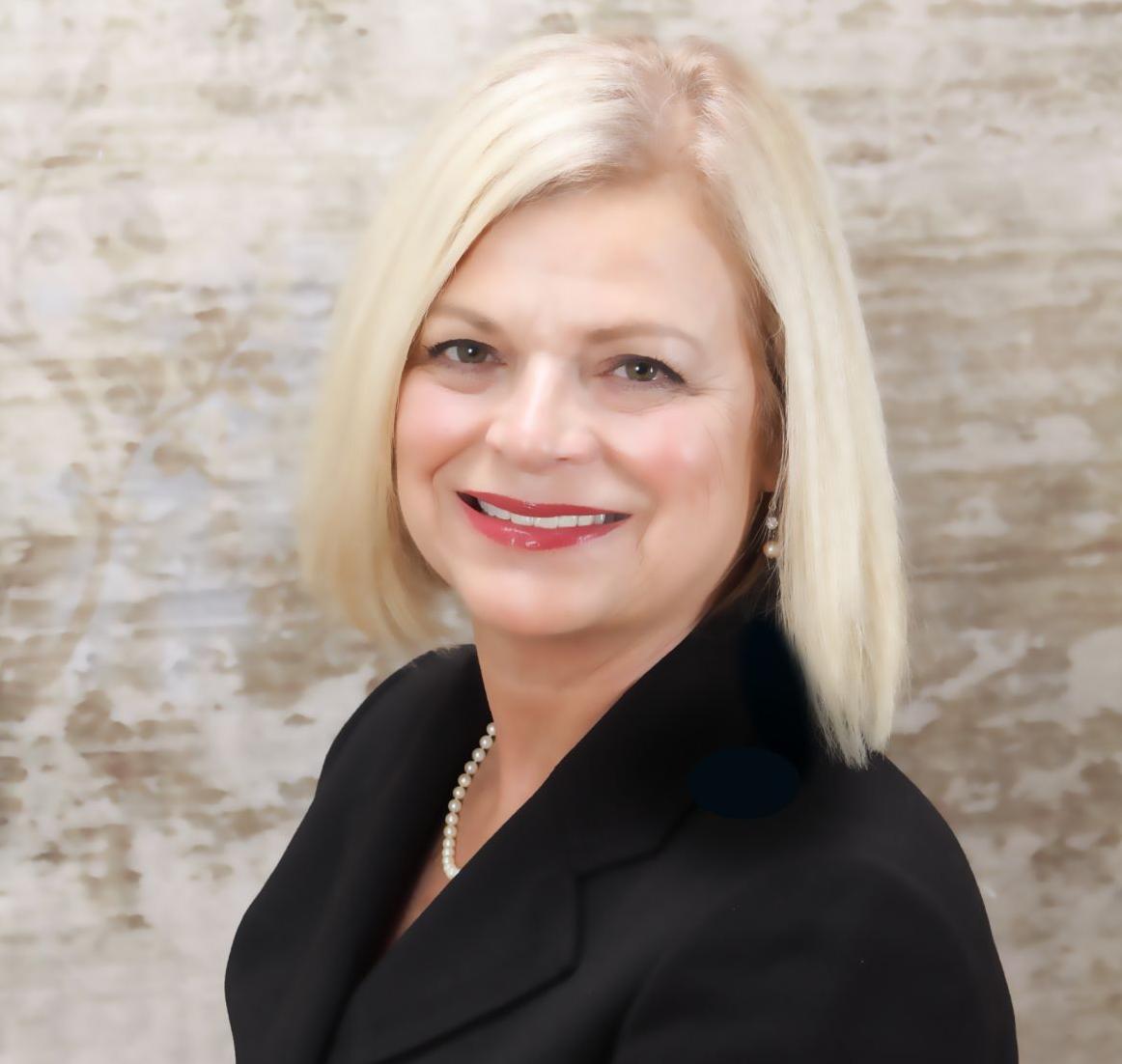 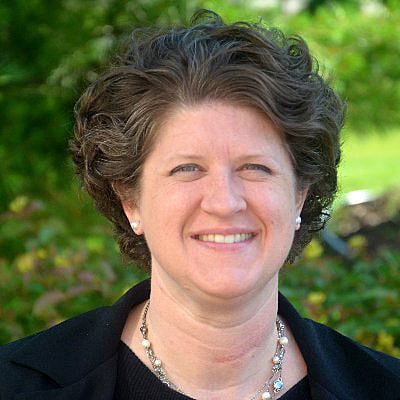