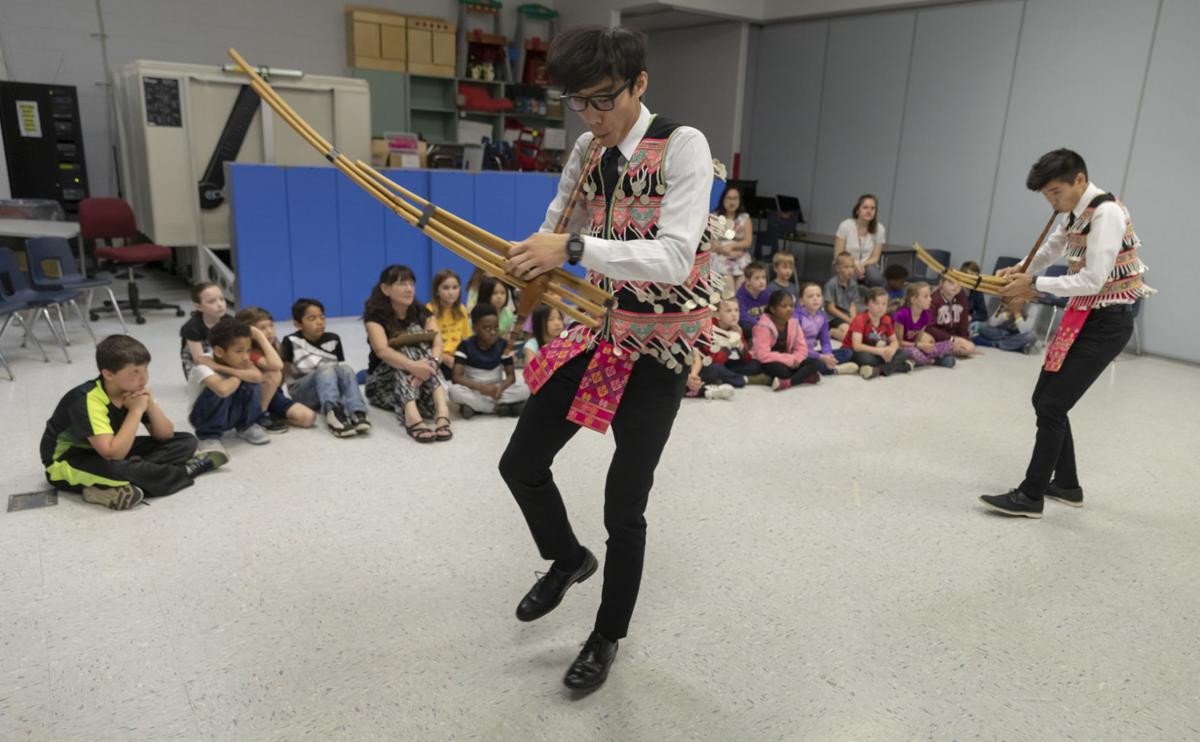 Patrick Xiong, left, a student at Madison Area Technical College, and Nathan Xiong, a sophomore at DeForest High School, dance and play a qeej during a demonstration on Hmong culture at Bird Elementary School in Sun Prairie. 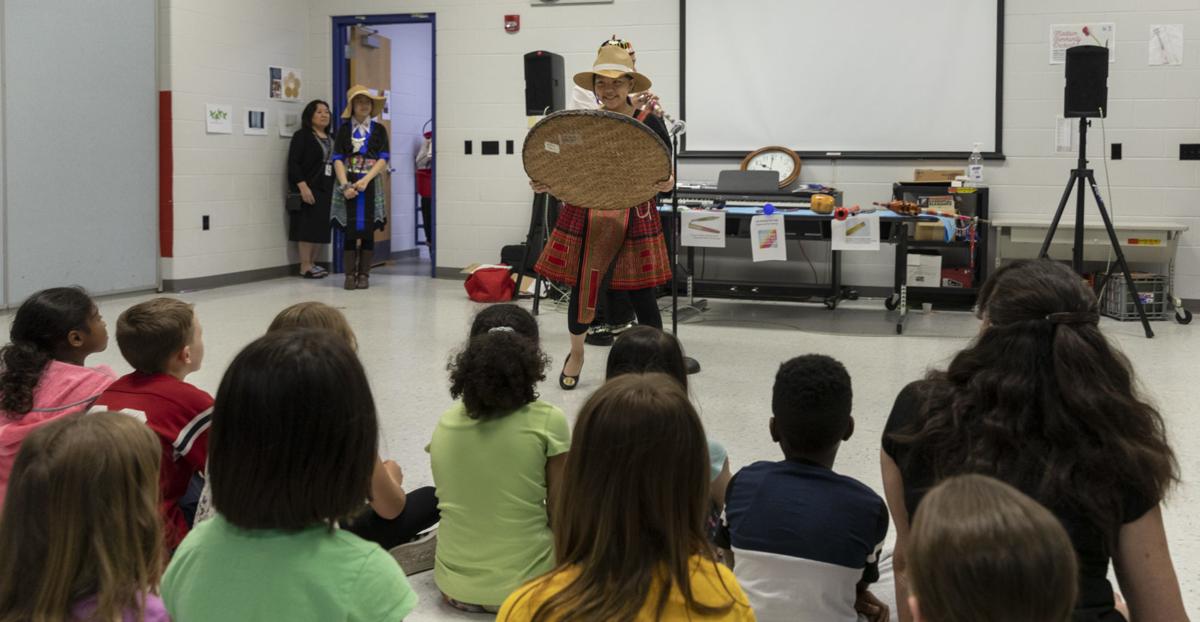 Fifth-grader Kylee Thao demonstrates how rice is husked using a tray made from bamboo or rattan. 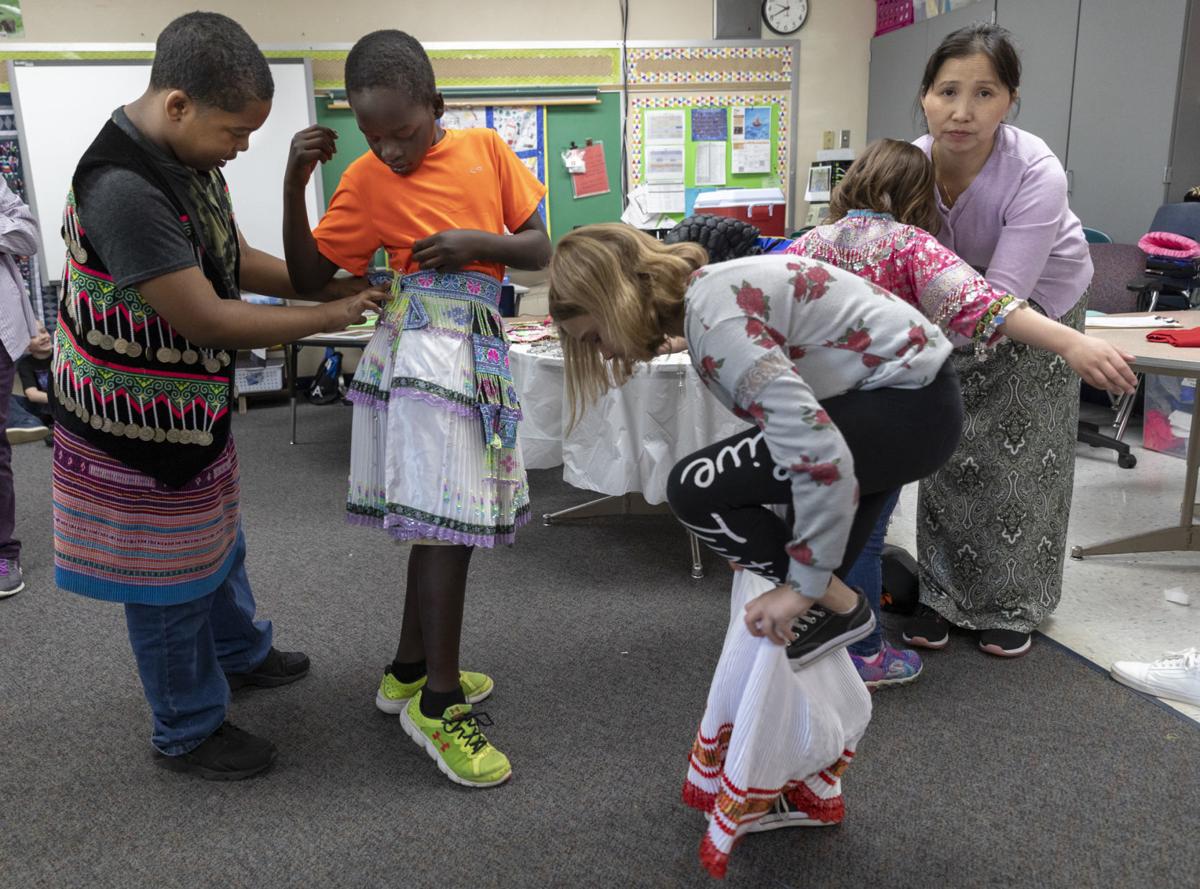 Fifth-grader Jazmine Vang enjoyed wearing her traditional clothing for Hmong Day at Bird Elementary School, where she performed in a fashion show.

“I love how when I twirl, this (skirt) goes around in a circle. It’s really pretty,” Jazmine said. “It’s exciting because my friends get to see me in my culture and I get to show them what it kind of looks like.”

This was the second year that the school in Sun Prairie hosted Hmong Day.

“The children got to participate and learn something that they never would have been exposed to,” said Xue Vang, bilingual instructional assistant.

Vang was born in Laos and then migrated to Ban Vinai Refugee Camp in Thailand during the Vietnam War. She spent most of her youth in the camp before coming to the United States.

Hmong Day at Bird Elementary recognizes Hmong American Day, which honors the contributions of the Hmong people to America and celebrates the history, culture and achievements they have made. The national day was created in 2013 to remember the day that General Vang Pao, along with 2,500 Hmong soldiers and families, were evacuated from Laos and made the United States home.

The idea for Bird’s Hmong Day came from Bridgette Baldwin, a kindergarten teacher at the school. She brought the idea to Vang, who runs the school’s Hmong Heritage Club, and the two put in the legwork.

Each wing of the school was in charge of decorating in honor of a different country. Baldwin organized simple crafts from the countries and students’ creations were put up in the hallways along with a map of Asia that highlighted the countries, along with their flags.

On Tuesday’s Hmong Day, Hmong students and others were involved in numerous back-to-back presentations for staff and student. The presentations included playing a reed pipe called a qeej, blowing on a nplooj, or leaf, to produce a sound, showing their traditional clothing, dancing and answering questions.

Artifacts were displayed in a “museum” set up in a classroom so students could learn about items such as traditional tools, clothing and ornate story cloths.

In addition, staff members were served Hmong food in the staff lounge and were able to talk to some Hmong representatives about their journeys as immigrants. Some of the food was made by parents, and other items were purchased through donations from the school’s parent group and staff members. Pa Lor, who has three children at Bird, brought about 250 vegetable- and meat-filled egg rolls that she made, and she also sat in the lounge to talk to staff.

“We have a large population of Hmong students at our school and in our community,” Baldwin said. “We needed to learn their history, understand their culture and celebrate how amazing they are.

“This celebration also built a bridge of trust and support between Hmong families and the staff at our school,” she said. “We hope that our Hmong students know they are valued and accepted. We also hope that our other students realize what a blessing it is to have friends who have a different cultural background than them and celebrate uniqueness.”

Some students said they try to learn the Hmong language from their classmates.

“I feel we need to learn about other cultures,” she said. “We know a lot about ours.”

A school where you can take your pigs with you.

Patrick Xiong, left, a student at Madison Area Technical College, and Nathan Xiong, a sophomore at DeForest High School, dance and play a qeej during a demonstration on Hmong culture at Bird Elementary School in Sun Prairie.

Fifth-grader Kylee Thao demonstrates how rice is husked using a tray made from bamboo or rattan.