The Madison School Board voted unanimously in support of a resolution to move forward with required COVID-19 vaccines for teachers and staff during a special board meeting Monday.

The resolution, written by board member Cris Carusi, directed district administration to put together a plan to implement COVID-19 vaccine requirements for teachers and staff. The district will present its plan to the board’s Operations Work Group on Sept. 20, and it will be on the board's regular meeting agenda for a vote on Sept. 27.

Carusi said she heard from members of the public who asked if the board and administration were moving too slow in enacting the requirement.

"I completely understand that this isn't just a matter of saying everybody go out and get a shot. We have to come up with a system to protect privacy while collecting some very sensitive medical information so we have to do it cautiously," she said. "But can we start doing clinics or can we start doing anything to encourage staff to get vaccinated sooner, before the mandate goes into effect?"

Prior to the resolution, the district had not collected data on the number of teachers and staff who had been vaccinated. Students are scheduled to return to classrooms on Thursday.

Board members expressed concern with the language in the resolution ahead of the vote, with member Ananda Mirilli suggesting the resolution be amended to recommend vaccination for staff as opposed to requiring inoculation.

Board president Ali Muldrow and member Maia Pearson agreed with Mirilli's suggestion during the 30-minute special session ahead of Monday's regular monthly meeting. Board member Nicki Vander Meulen pushed back and said the language in the resolution must be as clear as possible. The resolution was passed without changes.

“This start of the school year will be different from what we anticipated,” board member Chris Gomez Schmidt said. “I agree that a vaccine mandate is an important strategy.”

One parent, Philosophy Walker, who has a child in Madison schools under the age of 12 and therefore not yet eligible for inoculation, spoke in support of the proposal during the regular board meeting, which immediately followed the special session. Seventeen members of the public offered written testimony with only one expressing opposition.

Laurie Roberts, who said she is not personally opposed to the vaccines, took issue with a blanket mandate for all teachers and staff and cited a "silent minority" who have valid reasons for not wanting to get vaccinated.

"How will this mandate not only affect the silent minority, but our desire for equity and diversity among our staff?" she wrote to the board. "As in education, one strategy does not work for everyone. Let's think outside the box and recognize those who are not willing to be mandated into a medical decision."

Madison-area state lawmakers called on board members to move forward with mandatory vaccines for all district staff in an open letter Monday, hours ahead of the board's expected vote on the issue.

The eight lawmakers, all Democrats, asked the board to move "swiftly to enact a policy of mandatory vaccination for all adults in (district) facilities, including teachers and staff." 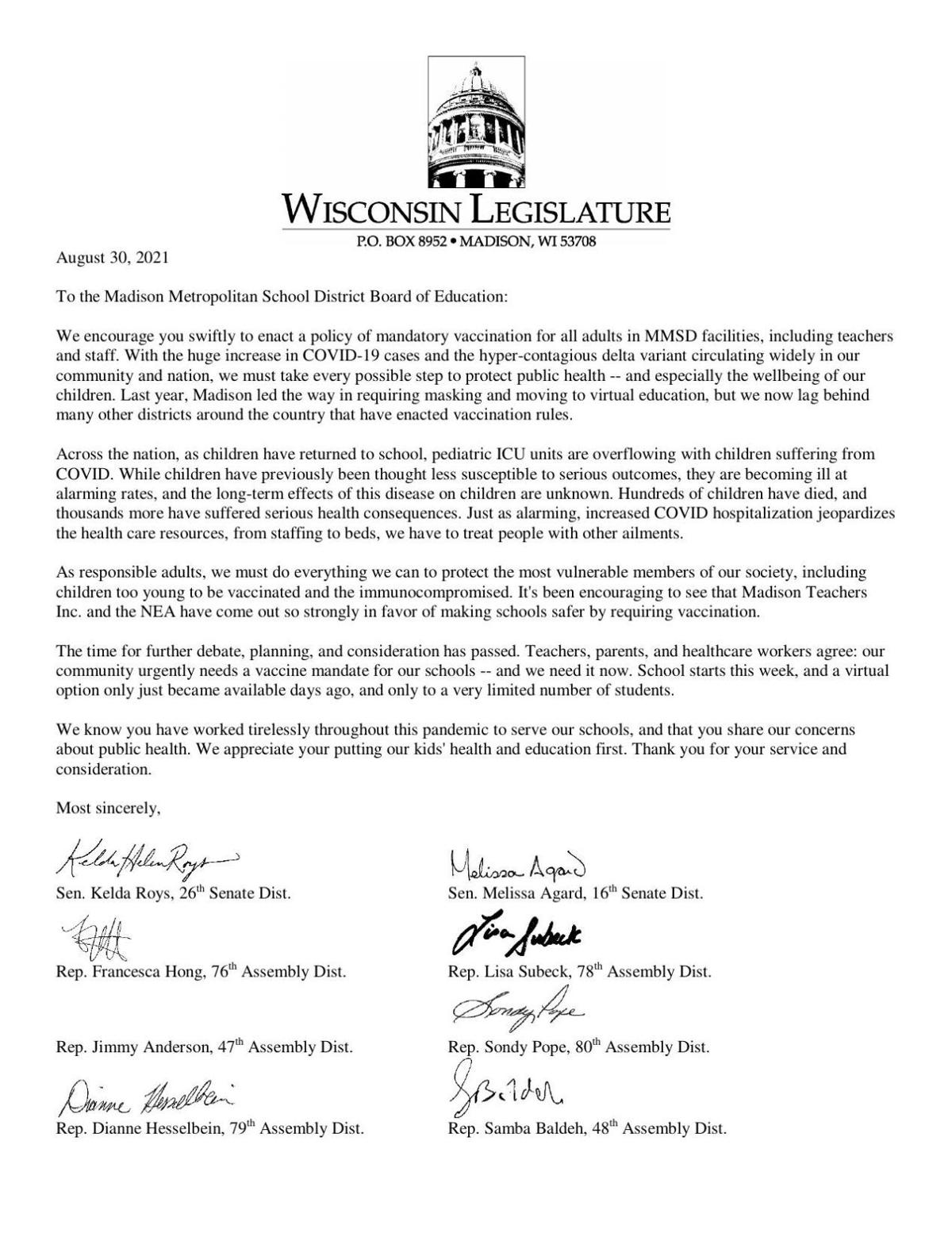 "Across the nation, as children have returned to school, pediatric ICU units are overflowing with children suffering from COVID. While children have previously been thought less susceptible to serious outcomes, they are becoming ill at alarming rates, and the long-term effects of this disease on children are unknown," the eight lawmakers wrote in their letter.

Superintendent Carlton Jenkins backed the vaccine requirement for teachers and staff in an announcement on Friday.

"We still have to take our children's health, at the end of the day, over everything else. It's not going to be easy," Jenkins said during Monday's special meeting. "The tough work is to come."

Madison teachers overwhelmingly support the idea, with 85.5% of those surveyed in favor of requiring vaccinations, according to a survey conducted by MTI. One in 10 said they still want to learn more about a possible vaccine requirement, while 4.5% said they did not support it.

“I think that 10% can easily be moved to the 85.5%, should the resolution pass,” MTI president Michael Jones said during a press conference on Friday. “From the staff side, we see vaccinations as an extremely important part of making sure our kids and families and staff are safe, and everyone’s safe in the building, but it’s not the only (mitigation effort available). It goes hand in hand with masking; it goes hand in hand with making sure we’re enforcing and following all of the guidelines our public health experts are advising us to follow.”

The district had been reluctant to consider the move until the Food and Drug Administration gave full approval to the Pfizer vaccine, which happened last week. That approval “certainly helped” move the discussion forward, district spokesperson Tim LeMonds said.

Milwaukee Public Schools, the state’s largest school district, recently announced it is fast-tracking consideration of vaccine requirements for teachers and staff after 100 students and teachers tested positive for the virus in seven days. Roughly a quarter of that district’s students began their semester on Aug. 16 and, in the first week, 42 students and 14 staff tested positive, the Milwaukee Journal Sentinel reported. As of Thursday, 101 students and staff reported testing positive.

“Vaccine mandates for staff are on the table for discussion” in district planning meetings, a district spokesperson said.

Who are you calling a Karen? New ethnic label on enrollment form prompting double takes

"This proposed change is due to the Karen label also being slang and a pejorative term for a White woman," Vander Meulen wrote.

COVID-19 vaccinations will be required for all Madison schools teachers and staff by Nov. 1

Teachers and staff in the Madison School District must be vaccinated against COVID-19 by Nov. 1, while those with medical or religious reasons…