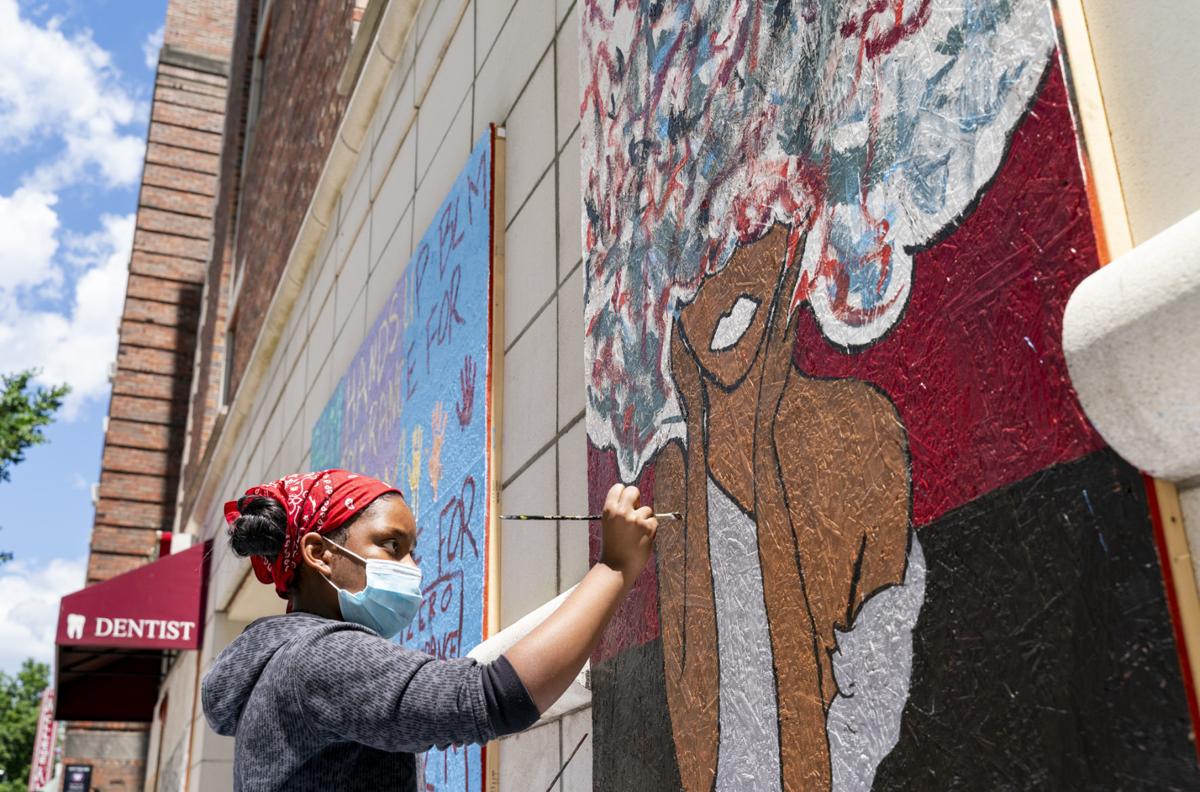 Shahaney Williams, who is going into ninth grade at East High School, works on her mural “Black Beauty” outside a Lake Street dentist's office. 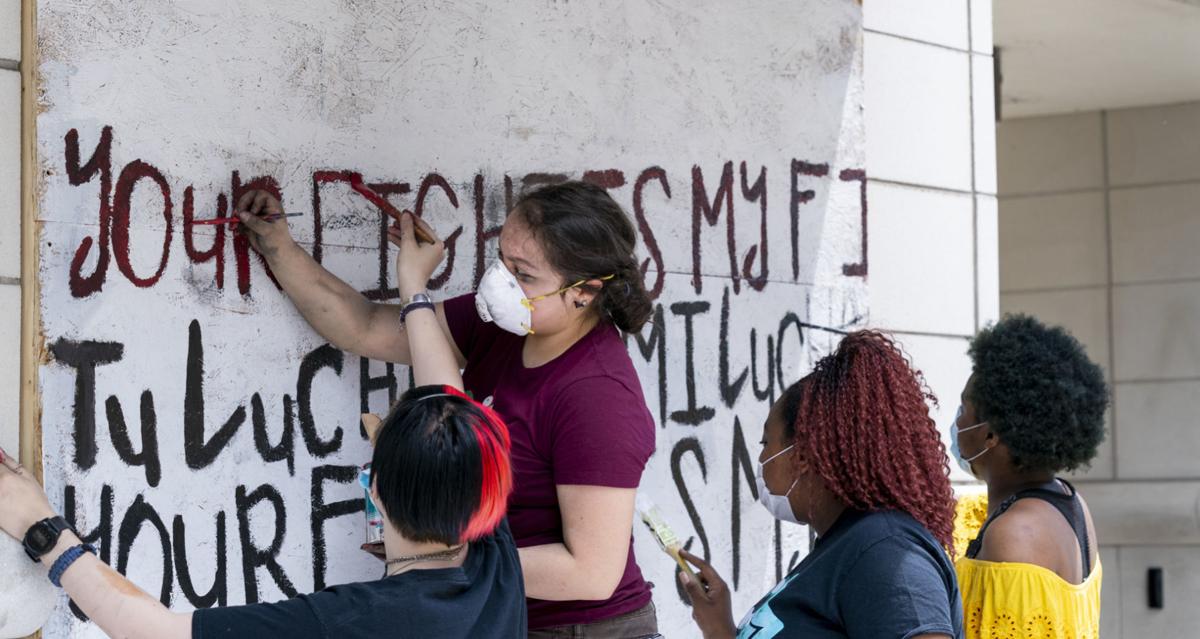 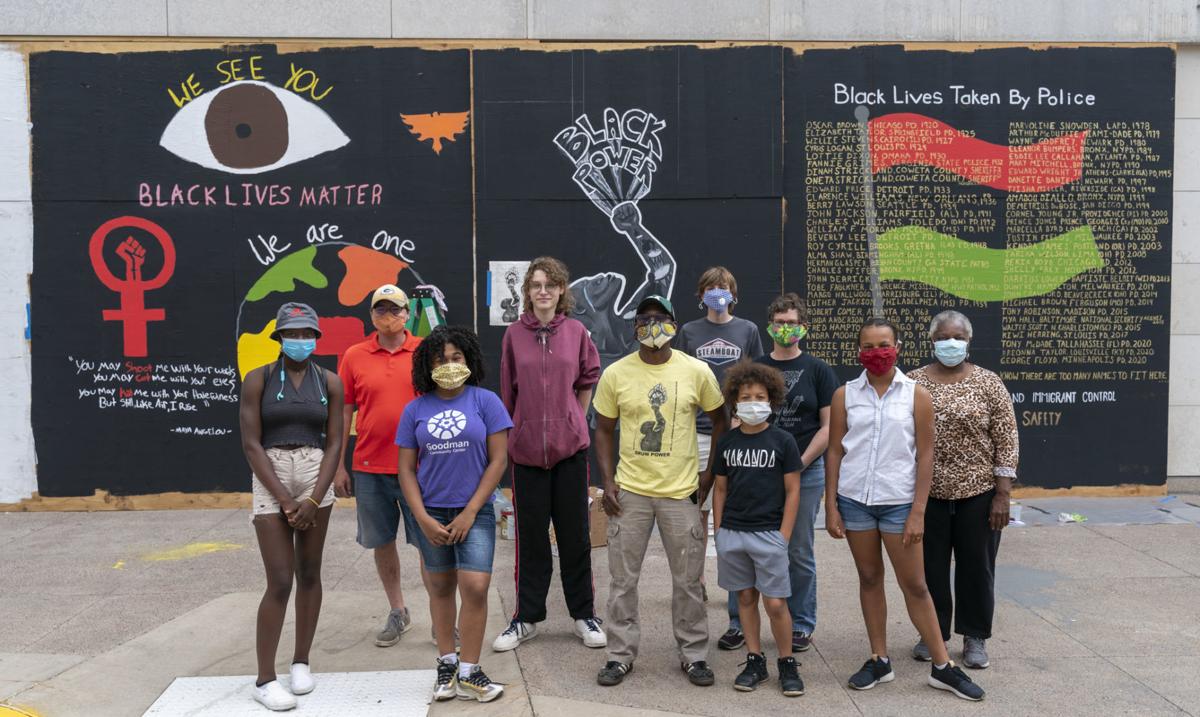 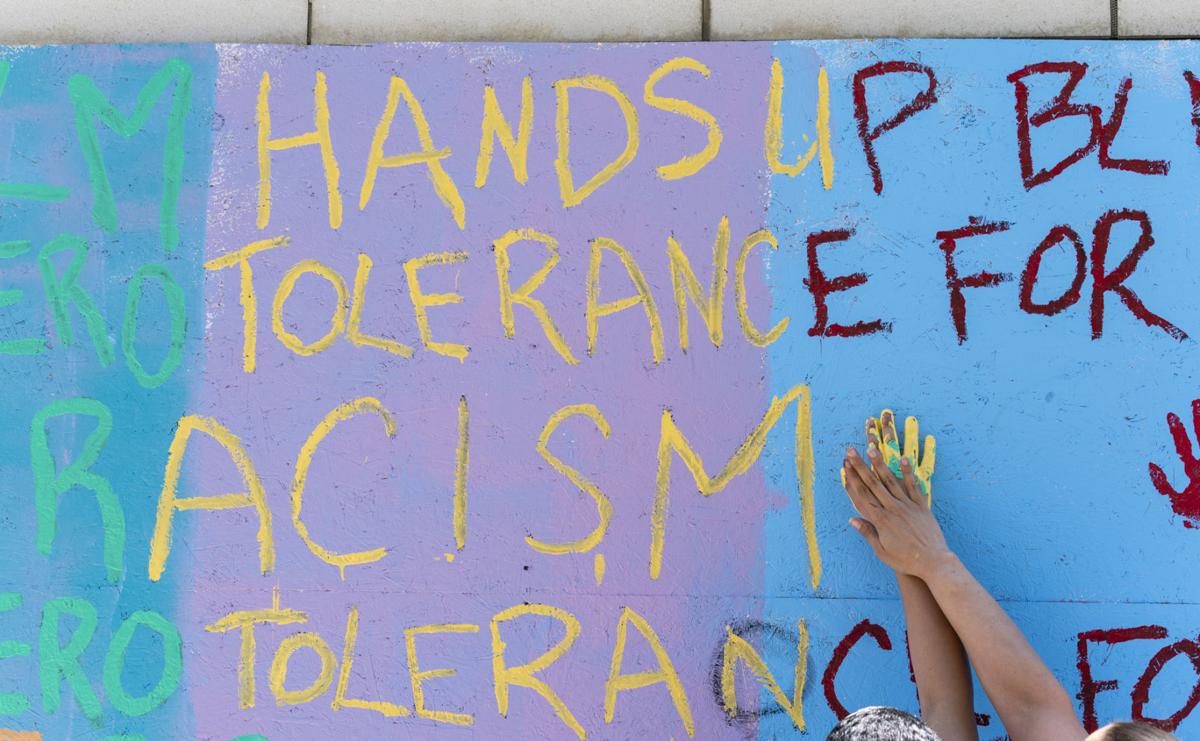 Seventh-grader Vada Scates makes an imprint of her hand for a Black Lives Matter mural on a Lake Street dentistry office.

For Madison-area youths such as Nelson Lashley, who just turned 10, participating in the Black Lives Matter protest movement by painting murals on boards covering Downtown businesses was empowering.

“I’ve been feeling good that I am in the protest,” said Nelson, who will be a fifth-grader at Lowell Elementary School. “It’s kind of beautiful how you can show what you’re doing through a peaceful form like art.”

The murals were painted on plywood put up after windows were broken during protests following the May 25 death of George Floyd in Minneapolis police custody. Many still stand.

Nelson painted with his father, Yorel Lashley, who said the opportunity aligned with the messages he tries to instill through his Drum Power company, which teaches drumming but also strives to develop the whole person.

As a musician, Lashley liked the idea of trying something in the visual arts. The project also was personal.

“Drum power is about empowering kids with structure but allowing them to express themselves ... I thought this was just another avenue for them to explore,” Lashley said. “The issues of thinking about not just equity but racism are always present for me. I am an African American in America. I have been for 48 years now.”

His group included youth involved in Drum Power currently or in the past along with some of his family members.

Youths worked on a number of the Downtown murals, either through groups like Drum Power or in groups organized by school teachers. Audifax, a street artist, got help from Edgewood High School students and some of their friends. Sharon Irwin, the grandmother of Tony Robinson, who was fatally shot by a Madison police officer in 2015, also worked with a group of youths.

“A lot of people just really wanted to have their voices heard ... There aren’t a lot of forums in our democracy to listen to youth voices,” said Karin Wolf, city arts administrator. “A lot of times youth would just sort of show up.”

Wolf, who worked with the Central Business Improvement District on the project, said artists receiving commissions from the city did not include employed school teachers because the program was designed to help fund working artists during the COVID-19 crisis.

As murals were being painted at the end of the school year, SJ Hemmerich, art teacher at Randall Elementary School, created a slide presentation of them. Hemmerich then presented it to students and as a last assignment asked , “If you could design your own mural for (Black Lives Matter), what would it be?” Then Hemmerich got the idea of why not do it for real.

Hemmerich, like other teachers, reached out to “Black and brown students” to get involved.

Hemmerich got permission to work on one large mural and five panels located near each other. The design for the large mural came from the assignment turned in by Ali Broadnax, who will be a fourth-grader at Randall. The design featured the initials “BLM,” for Black Lives Matter, surrounded by 100 hearts. Hemmerich then used Post-it notes to write ideas from other students’ assignments and put them on the hearts. The students painting could then look through the notes for ideas of what to paint inside the heart they chose.

One of the five panels was designed by Samaira Watford, who will be a junior at West High School, and happened to walk by.

Hemmerich also sent an email out to art teachers in the Madison School District to recruit more help beyond Randall and wound up with more than 135 students and some staff members.

“I am really passionate about social justice work,” Hemmerich said. “I thought it would be a really good way to get students involved.”

Kati Walsh, art teacher at O’Keeffe Middle School, who organized the painting of a row of four murals, said this was a chance to have students’ voices heard, which happens organically in the classroom. Plus, she said, it was a chance to check in with them since schools have been closed because of COVID-19.

One of the students, Ali Bravo, who will be a ninth-grader at East High School, said because she is 14 her parents worry about her taking part in protests.

“I wanted to do something. I didn’t want to just sit back,” said Bravo, who identified herself as Mexican and came up with one of the mural ideas. “I just wanted to say (to the Black community), ‘I see you. I support you.”

Shahaney Williams, who will be a ninth-grader at East, came up with an idea for another mural that shows a woman with an Afro painted red, gray, blue and black. She said it signifies the “beauty of having black skin that goes with anything.”

“I’m feeling empowered that we are letting people know what is going on is wrong and we need to change it,” said Ta’Mya Williams, who will be a ninth-grader at East. “I wanted to help my community as a Black person, as a Black girl in this world.”

Monique Karlen, art teacher at La Follette High School, said she started by recruiting some of her students and then got other help from students from Middleton and East high schools. La Follette student Shantiana McNeal came with a sketch and an idea and the project evolved.

“What I got out of this project was the great feeling of being a part of something bigger than myself and something that could possibly live on way past me. It also made me feel accomplished and has given me the push I needed to pursue art in a different way,” said Shantiana, who will be a sophomore at La Follette. “It was empowering for me as a young Black woman to see all of the other Black artists and the art pieces that gave power and expressiveness to the movement. I can’t wait to one day tell my kids about what I did.”

Karlen said because her group was stationed near the area to get supplies, older Black artists walked by and interacted with the students and that also was empowering.

“I really wanted to give my students a platform to speak and I really felt like they rose to the occasion and really took ownership of the project,” Karlen said. “Art is a really powerful way to say something.”

Some Madison teachers also spent the first part of their summer break painting a mural spearheaded by Charlotte Cummins, art teacher at Chavez Elementary School. She was joined by Meri Lau, Candace Patterson, Leslie Dickerson and Nicole Isaacs and Gwen Kong, who was accompanied by her son.

“My interest was sparked by participating in a protest and I saw fabulous works of art being created. Being an artist, I wanted to contribute to the movement of uncovering the veil of anti-Blackness racism in our country and seeking equity for every person,” Cummins said. “As an art teacher of color this was a meaningful expression of how to support this movement, our students and their families.”

Saturday's event allowed students and their families to drive up to the front of the high school.

Shahaney Williams, who is going into ninth grade at East High School, works on her mural “Black Beauty” outside a Lake Street dentist's office.

Seventh-grader Vada Scates makes an imprint of her hand for a Black Lives Matter mural on a Lake Street dentistry office.