More than 1,000 students left Madison for other school districts this year
Share this
{{featured_button_text}}
1 of 3 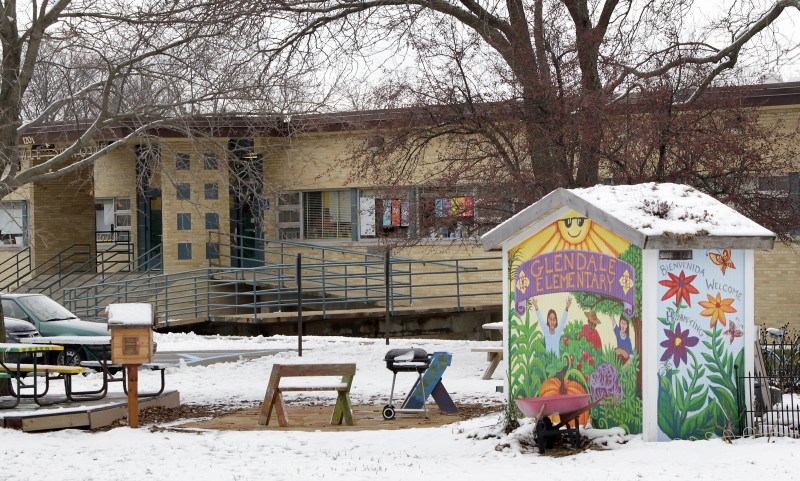 Glendale Elementary had the highest ratio of students transferring to other districts this year. Its attendance area splits the Monona Grove School District, which received the most students from Madison this year. 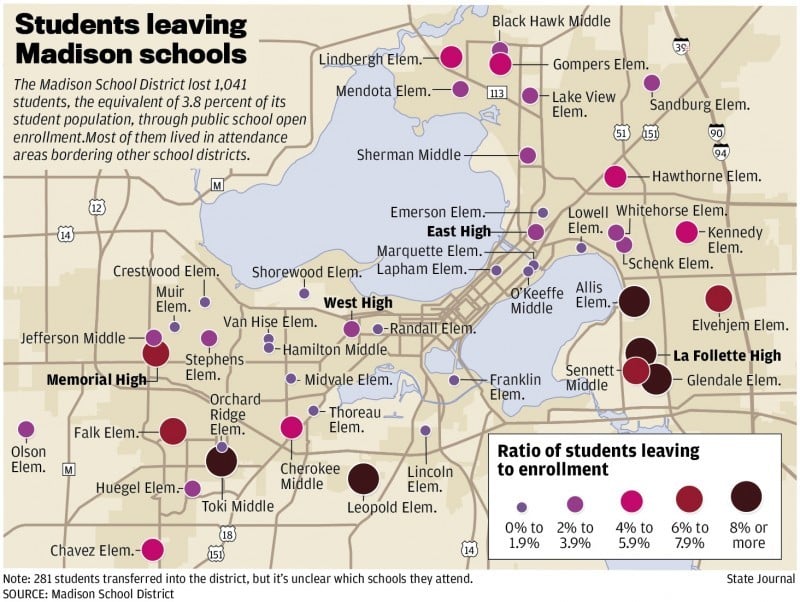 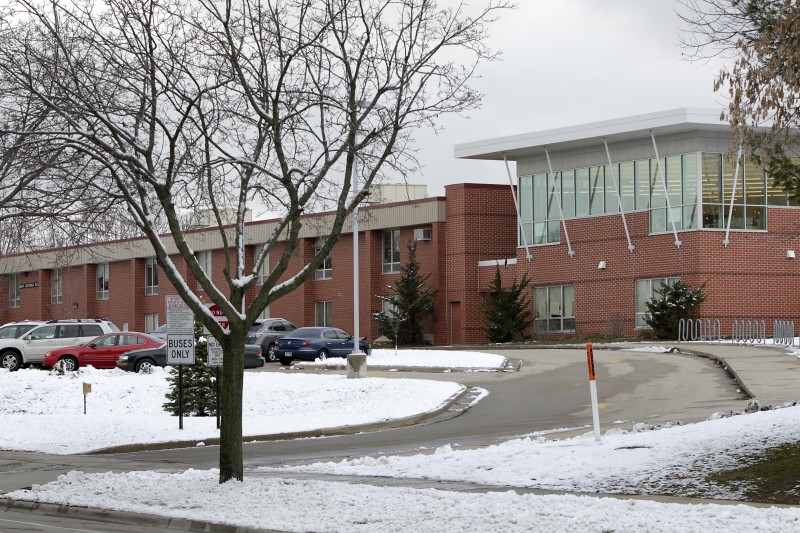 The Leopold Elementary attendance area has one of the highest rates of students leaving for other districts under the state's open enrollment policy. It is sandwiched between the Verona and Oregon school districts.

More than 1,000 students living in the Madison School District are attending other districts through the state's open enrollment program, which cost Madison a record $4.9 million net loss in state aid this year.

The 1,041 students leaving the district represent the largest number since open enrollment began 14 years ago. The 281 students living in other districts who chose to attend Madison schools also set a record high.

Superintendent Jane Belmore said the district is taking the open enrollment issue seriously and will consider another parent survey, which it last conducted in 2009, in addition to improving its website and other community outreach.

"We're looking at understanding better what it means and how we can communicate better to different groups of people like entering, first-time families," Belmore said.

School Board president James Howard said he doesn't know how significant the problem is, noting Madison's enrollment has been stable for years, with total students increasing to more than 27,000 this year because of 4-year-old kindergarten. He said recent projects to improve technology and curriculum should help the district retain students.

Board members at a committee meeting Monday night said the district should survey families who leave and focus on the problems they list for leaving.

"For all the good things going on in our schools, there are still a lot of parents who aren't satisfied," board member Mary Burke said. "It's better to hear (about their issues) and try to fix them than to keep losing students and have it cost us $5 million each year."

According to a district report presented at Monday night's meeting, Madison lost the equivalent of 3.8 percent of its student population to other public schools, not counting those who transferred into the district.

Among other Dane County districts, Sun Prairie lost 2.6 percent, Verona lost 2.2 percent and Middleton-Cross Plains lost 1.8 percent. Verona and Middleton had a net increase from students transferring in this year.

Milwaukee lost 6,696 students, or the equivalent of 8.5 percent of its student population, and gained 661 students, district spokesman Tony Tagliavia said.

The total number of students leaving Madison schools increased 14 percent over last year, compared with 11.8 percent in Milwaukee. This year parents had more time to enroll in other districts after the Legislature expanded the open enrollment window from three weeks to three months.

According to the district report, those leaving Madison are disproportionately white and largely come from attendance areas that border other suburban school districts. About 70 percent of students leaving are white; about 45 percent of the district population is white.

The total number of students leaving the district includes students who enrolled elsewhere in previous years. Of the 378 students leaving for the first time this year, two out of five never attended Madison schools.

For years the district blocked many student transfer requests to preserve racial balance at schools. The School Board ended the practice in February 2008 in response to a federal court ruling. Transfers out have steadily increased since then.

A 2009 survey of families opting to leave the district found that more than 60 percent mentioned "environmental issues" related to safety, drugs, alcohol and bullying in the schools. About 42 percent said the resident school was closer to home, work or day care, and 18 percent made reference to the district's limited curricular offerings. About 15 percent said their children transferred to a virtual school. Respondents could list multiple reasons.

Since then the district has developed multiple strategies to improve perceptions of the schools, including a bimonthly family newsletter, direct communication with local leaders and designated staff for each high school attendance area to collect positive stories to disseminate to news media and other channels.

The report said the district is working on a redesign of its website and considering strategies involving parents and staff for specific schools with the most students leaving, such as Glendale and Leopold elementary and Sennett and Toki middle schools.

Parents, educators and physicians in Dane County school districts have spearheaded more than a dozen grassroots efforts to get area students back into schools for at least part of the 2020-21 school year.

A committee previously recommended the school be named for Milele Chikasa Anana among three initial proposals. The group will consider a fourth name next month, though it could recommend Anana again.

Masood Akhtar founded We Are Many-United Against Hate three-and-a-half years ago.

Aiyenero is in his third year as a student support specialist at One City Schools, where he also runs the morning student biking program, and is an academy coach with Chicago Fire FC.

A Burlington Area School Board meeting ended Monday night with chanting, arguments, School Board members walking away and a police presence, sparked by a proposal that BASD adopt an anti-racism policy and curriculum.

Despite COVID-19 pandemic, 'Learning Out' is integral to Montessori school's philosophy

Madison Community Montessori School has come up with a hybrid model to keep students safe while giving them a chance to interact and spend time in nature, which is integral to the Montessori philosophy.

Teacher unions seeking to retain their status are doing slightly better with participation than last year, with 66% of members having cast votes, up from 63% last year.

The briefs were filed as part of the case against Public Health Madison and Dane County's emergency order to close schools for in-person learning for grades 3-12, which the state Supreme Court put on hold in September.

Glendale Elementary had the highest ratio of students transferring to other districts this year. Its attendance area splits the Monona Grove School District, which received the most students from Madison this year.

The Leopold Elementary attendance area has one of the highest rates of students leaving for other districts under the state's open enrollment policy. It is sandwiched between the Verona and Oregon school districts.