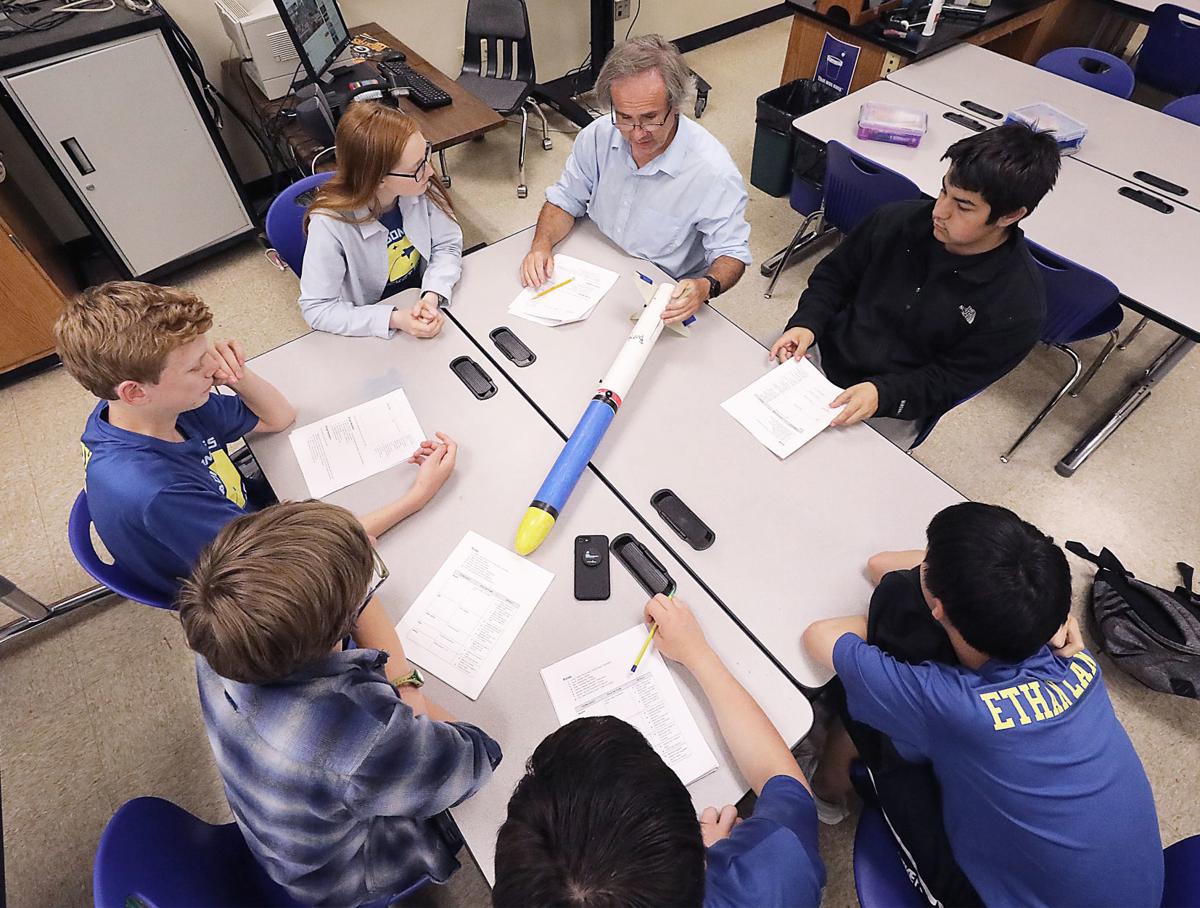 Members of Madison's West High School Rocket Club meet with Pavel Pinkas, the club's mentor and scientific adviser, to plan their presentation for an international model rocket competition in Paris next month. The team, nearly all freshmen, won a national competition earlier this month to qualify. 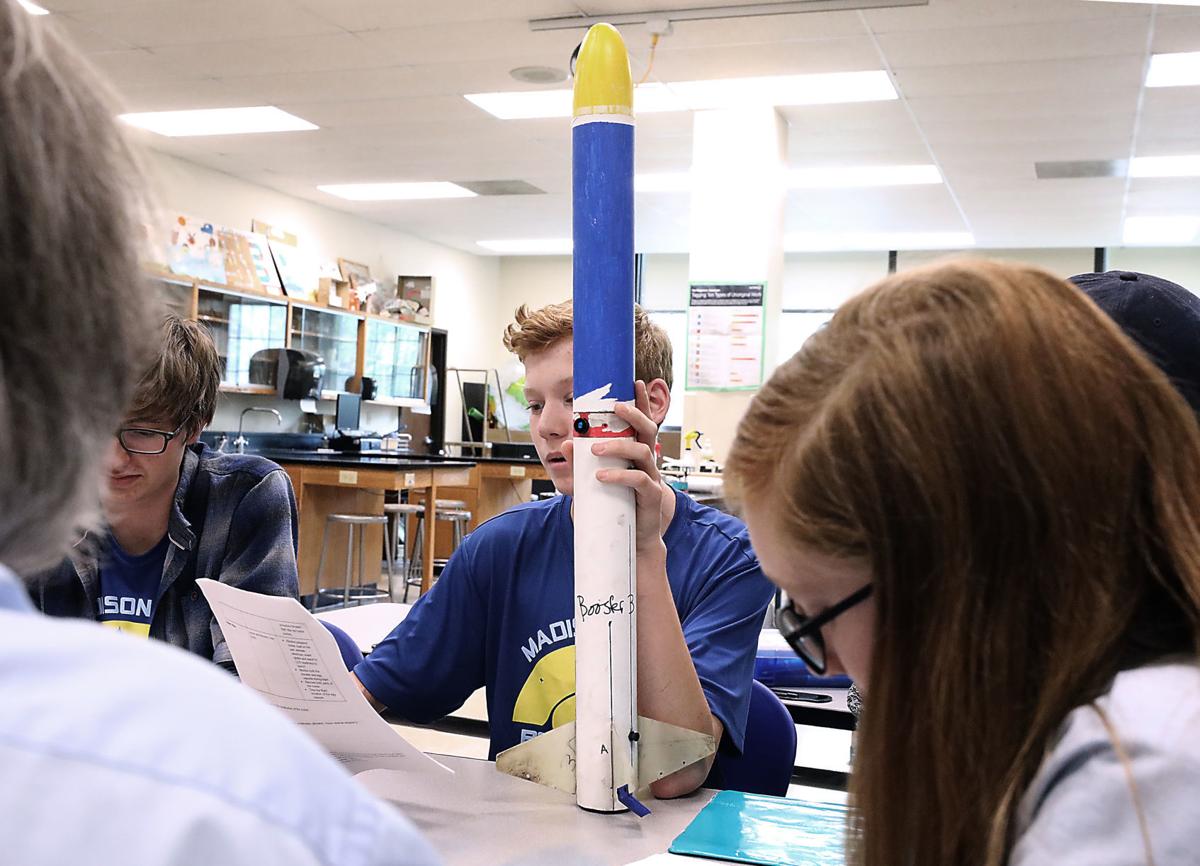 The rocket is made from lightweight, craft paper tubing, fiberglass fins and a plastic nose cone, and has two main parts — a payload and a booster.

A month before Americans celebrate the 50th anniversary of landing a man on the moon, a group of West High School students will demonstrate their own rocketry skill on an international level — ideally by sending three eggs 856 feet in the air to safely land uncracked on French soil.

The nearly all-freshmen team of Madison students will represent the United States during the International Paris Air Show next month, facing off against three other nations to determine the champion model rocket building team. The trip marks the third time West High has sent a team to the international competition, the last being in 2012.

Earlier this month, the club qualified by placing first in the Team America Rocketry Challenge, besting 100 other teams, including another from West High.

The 34-inch rocket is constructed out of lightweight, craft paper tubing, fiberglass fins and a plastic nose cone, and is divided into two main pieces — the payload portion containing three large grade A eggs and the booster component.

The eggs represent the three astronauts on the Apollo 11 spaceflight.

Nathan Wagner, 15, said the national competition, which was held near Washington, D.C., was a great team-building experience “as well as something we could show off our potential and say, ‘Hey, this is what America’s got, this is what West High’s got, and this is what we’re going to carry to internationals.’”

The goal of the competition is to design a rocket that hits a target altitude, deploys a parachute and lands, all within a set amount of time. The team with the lowest score wins.

Points are added based on the amount of time a rocket is below or above the goal of 43 to 46 seconds of airtime.

A team’s score also goes up depending on how far off a rocket is from reaching 856 feet — a nod to when Neil Armstrong first planted his foot on the lunar surface at 8:56 p.m. CDT on July 20, 1969 — measured by an on-board altimeter.

At the national competition, West High had a score of 10 after two launches, beating a second-place Alabama school that scored 12.56 points.

Biology teacher and club adviser Chris Hager said she has warned the students about the media attention they’ll receive in Paris, where France, Japan and the United Kingdom are also fielding teams.

“I think it’s going to be amazing. As I’ve heard, we’re going to be treated like celebrities, apparently,” said freshman Lukas Weinhold, who also noted the competition as a bonus for a resume.

Jacob Mello will be traveling out of the country for the first time. The freshman had not even been on an airplane before.

He said some of his teammates who have visited Paris are floating ideas of things to do on the trip.

“I don’t even know what most of those things are, but I’m guessing it’s going to be a blast,” Mello said.

Earlier in the school year, club members designed and built individual rockets. It was Mello’s rocket that was eventually selected and refined to be used in the competition setting.

It is called the Stewart V after Mello’s nickname and the Saturn V rocket that sent the Apollo 11 crew to the moon.

“Consistency is the key to the nationals and winning it,” the 15-year-old Mello said.

For 14-year-old Alex Goff, the trip will be the third time the freshman has visited Paris. This time, he’d like to go to the Père Lachaise Cemetery, where Doors frontman Jim Morrison and Polish composer and pianist Frédéric Chopin are buried.

The trip is paid for by the Aerospace Industries Association and defense contractor Raytheon.

On Wednesday, seven of the eight team members gathered after school to practice the presentation portion of the international competition where they will explain their rocket to and answer questions from a group of judges.

Club mentor Pavel Pinkas quizzed them on physics questions, rocket terminology and design decisions, such as why they chose pricey but more sturdy fiberglass fins over wooden ones, occasionally joking that “this isn’t rocket science.”

With 40% of a team’s overall score coming from the presentation portion, the team practiced for more than two hours, briefly interrupted by an announcement over the speakers asking for the owner of a black Honda Civic to move their car.

The team leaves for France on June 17. The presentation will take place June 20 and the launch is scheduled for June 21.

One of the company's rockets will steer an autonomous space shuttle scheduled to begin delivering cargo to the International Space Station in 2021.

The contagious energy was coming from jam-packed bleachers where members of Forward Madison's fan groups spend much of the match.

The South Side middle school becomes the second Madison school to receive the recognition in a program that is used at more than 6,400 schools throughout the country.

Graduation 2019: Where and when to catch this year's high school graduations in Dane County

Congratulations to the Class of 2019. While some area high schools have already held commencement ceremonies, most plan to recognize graduates…

It wasn't by land or sea, but rather air, by which the British beat the Americans on Friday.

Members of Madison's West High School Rocket Club meet with Pavel Pinkas, the club's mentor and scientific adviser, to plan their presentation for an international model rocket competition in Paris next month. The team, nearly all freshmen, won a national competition earlier this month to qualify. 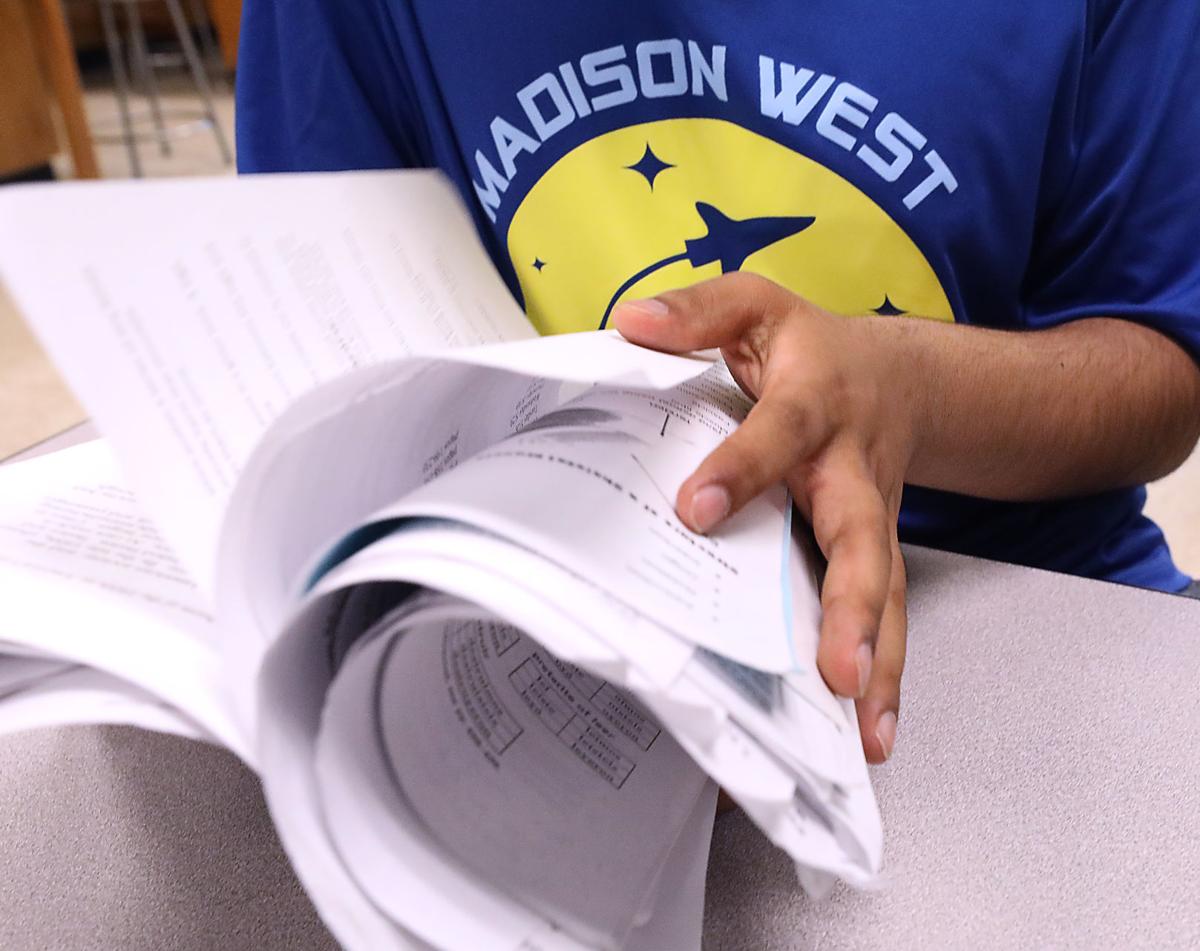 On Wednesday, seven of the eight members of the West High team going to the international model rocket competition practiced a presentation they'll give on their rocket, named the Stewart V, to a group of judges in Paris. 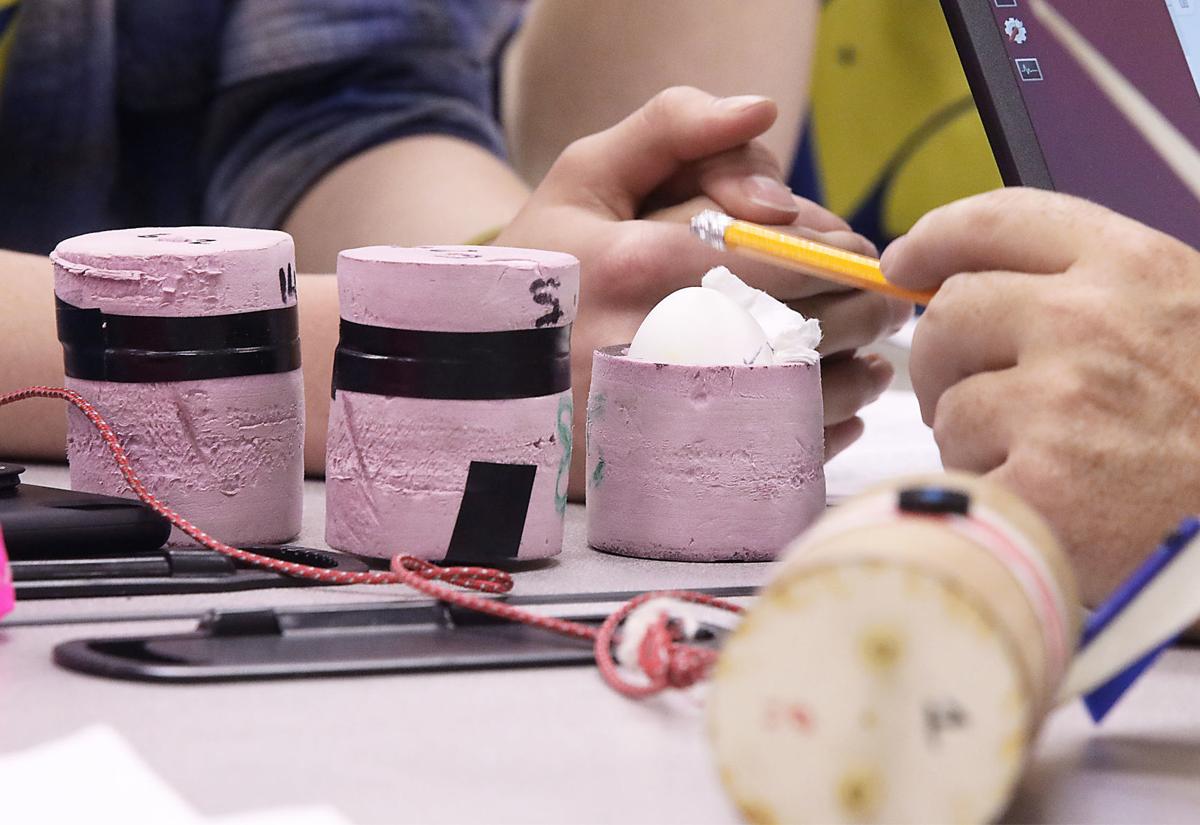 The rocket will carry three large grade A eggs that must return to the ground safe and uncracked. The eggs represent the three men on the Apollo 11 spaceflight.

The rocket is made from lightweight, craft paper tubing, fiberglass fins and a plastic nose cone, and has two main parts — a payload and a booster.