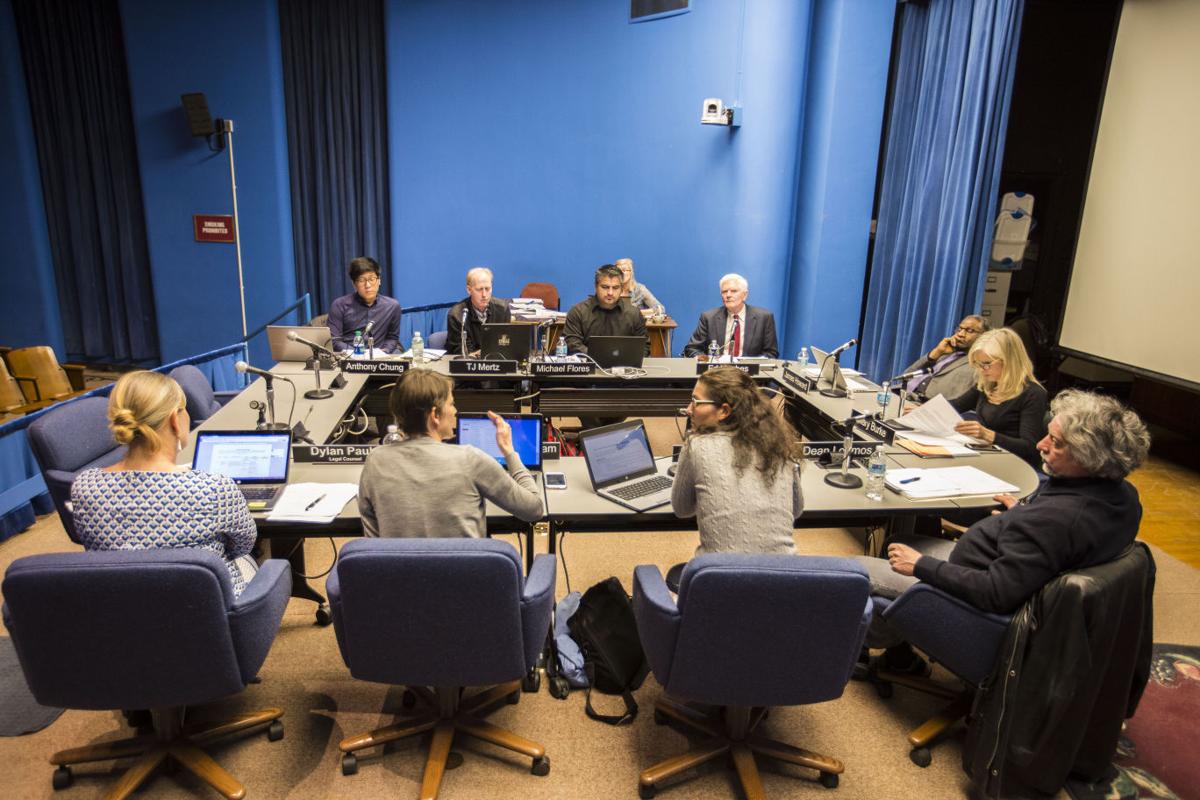 A Madison School Board meeting in session at the Doyle Administration Building. 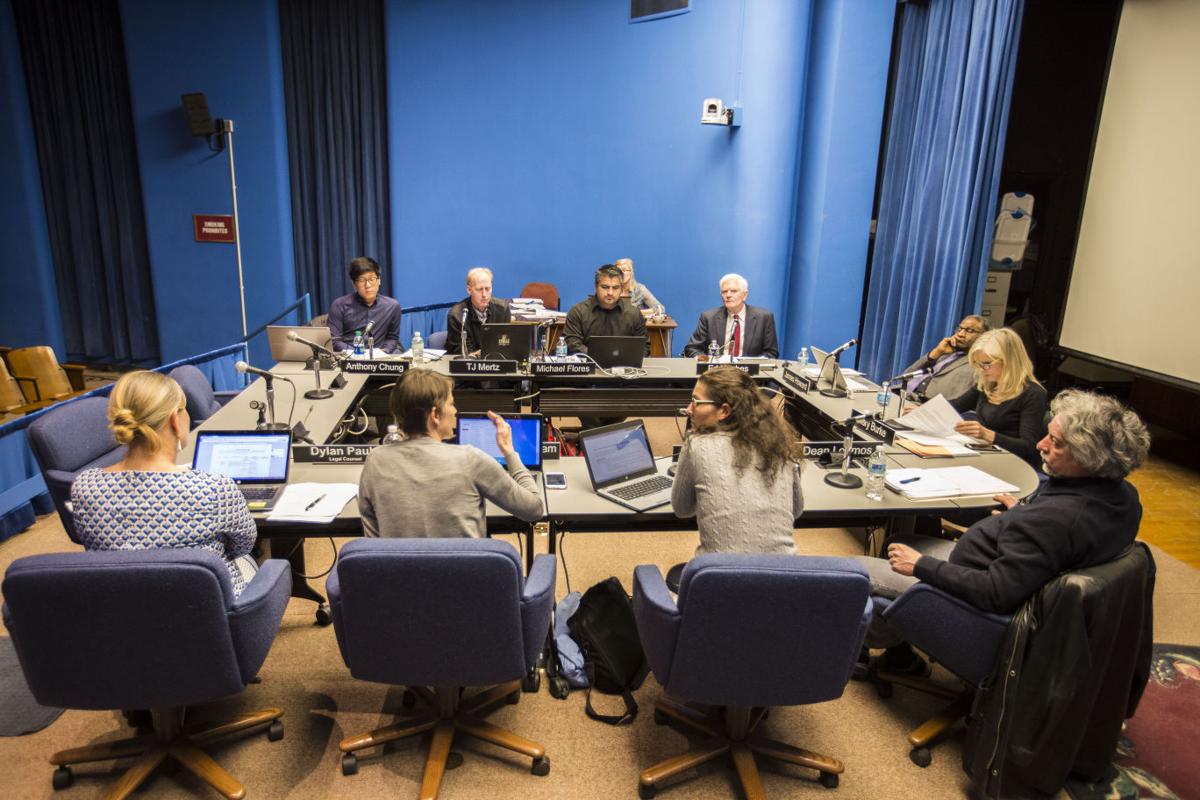 The city and Madison School District have reached a tentative deal on $9.3 million in tax incremental financing (TIF) money. The school board, above, and City Council must still apporve the agreement.

The Madison School District would reduce its staff by 1.6 percent and raise property taxes 2.5 percent next year under a balanced budget proposal released Friday by Superintendent Jennifer Cheatham.

The document is Cheatham’s formal recommendation to the School Board after months of informal feedback from board members. The board now will deliberate and weigh public comments before a vote on June 27.

Under the proposal, the owner of the average-priced home, currently valued at $254,549, would pay taxes of $3,045 to support the education of Madison children, an increase of $74 over the prior year.

The district’s operating budget is proposed to increase $5.5 million over the current year’s budget to $376.4 million.

The budget landscape for the 2016-17 school year is another tough one, said Mike Barry, assistant superintendent for business services. There is no increase in the state revenue limit formula and just a $100 increase per pupil in what is called categorical aid, the only notable increase in state support for the budget, he said.

Revenues will increase less than 1 percent while fixed costs will rise more quickly. That has led to a budget gap of $6.4 million to $8.5 million, forcing cuts in staffing and programming.

“The state did us no favors,” Cheatham said. “This budget required that we not only define our priorities but narrow them and zero in on the most critical steps that will keep the district moving in a positive direction.”

The proposed budget would spend $1.6 million in reserve funds and use the board’s full levy taxing authority.

The most challenging aspect of the budget, Cheatham said, was personnel cuts. In the past, the district has been able to make these cuts mostly at the central office or among support staff at the school level.

“Now, the vast majority of cuts are classroom teachers,” she said.

The proposal would reduce staffing overall in the district by 66 full-time positions out of the current 4,081. About 50 of those positions are to come out of staff based at the school level. The rest would be eliminated from the district’s central office.

Some of the school-based staff reductions are due to a projected slight dip in enrollment next year — deemed temporary by district officials — while the rest are related more directly to the budget gap. Additionally, the reductions at the central office are due mostly to Cheatham choosing to repurpose existing budget money for what she considers essential priorities going forward. Since there is little new money, this is the way she is proposing to pay for them.

The new investments recommended by Cheatham include $289,000 for at least three more employees to focus on student academic and career planning; an additional $625,000 toward the next round of the district’s technology plan (boosting the technology budget to $3.65 million); and an additional $500,000 for major capital maintenance (upping that budget to $5 million).

One budget scenario earlier this year included cutting three instructional resource teachers who serve gifted and talented students. That would have left the district with 19 such teachers. It proved an unpopular idea with parents, and the budget proposal released Friday cuts just one of those positions.

The budget provides for a 2.05 percent overall increase in money spent on wages and salaries, although individual raises will vary based on an employee’s circumstances. Everyone will get a base wage increase of 0.12 percent, and many will get additional increases based on educational attainment and years in the district.

The budget proposal is predicated on a zero-percent increase in health care costs, which means finding about $1.95 million in savings in that area. Cheatham said Friday it is likely this will mean a new approach to fringe benefits in which employees would begin paying a percentage of their health insurance premiums.

This would be a big change in a district where the teachers union has long fought the idea and past boards had shown little interest in pushing it through. The current board has not yet signed off on the idea, although members have signaled they are willing to take the step.

How the employee contribution will be structured remains a big missing piece. Cheatham said her team will present a proposal next month.

In the weeks ahead, board members will be able to craft budget amendments to shift money around if they can get a majority of their fellow board members to agree with them. Anna Moffit and TJ Mertz said Friday they likely will be among board members offering amendments, though both said they are still working on them.

Mertz said he’s looking closely at areas such as the way school-based funding is allocated and the funding that surrounds the board’s Behavior Education Plan, or disciplinary code, and how it has been implemented. Moffit said she is looking at class sizes at high-poverty schools and the level of staff support for students with intensive mental, physical or intellectual needs.

The budget proposal is to be formally presented to the School Board at 6 p.m. Monday in the auditorium of the Doyle Administration Building, 545 W. Dayton St. A list of meetings for public feedback and an online comment form can be found at mmsd.org/budget.

Sieg Thies said he learned life-saving techniques as a teenager in Germany.

He plans to authorize only nonprofit organizations, not for-profit companies, to run independent charter schools in Madison.

The change affects only team membership, not the ability to compete in games.

After months of work, board members are making final tweaks ahead of Monday's meeting.

The approach could be used to help fill a budget gap next year.

With difficult budget, School Board president says the time may have come for this "really tough conversation."

Additionally, the district's central office could lose the equivalent of 17 full-time positions.

The reduction in employees would help close a budget gap of around $8.5 million. However, administrators say some of the staff cuts — 30 to 39 positions — would be happening anyway because enrollment is declining.

As world changes, technology moves into Madison's classrooms with a device for every student

The district's technology plan seeks to bring "one-to-one computing" to all schools in seven to eight years.

She retains strong board support, exceeding expectations in four of six categories.

A Madison School Board meeting in session at the Doyle Administration Building.

The city and Madison School District have reached a tentative deal on $9.3 million in tax incremental financing (TIF) money. The school board, above, and City Council must still apporve the agreement.