The Madison School District paid more than $30,000 for a third-party investigator to look into circumstances surrounding the installation of hidden cameras in an East High School coach’s office.

The district has so far not released the full report put together by MWH Law Group, the firm tapped to conduct the investigation.

But in response to a request by the Wisconsin State Journal under the state’s open records law, the district did release the retainer agreement and invoices between January and March from the Milwaukee-based firm that conducted the investigation.

The invoices, released Tuesday, show the firm reviewed the district’s employee handbook, including School Board policies regarding installation of surveillance equipment; interviewed district staff; reviewed documents and evidence; and conferred with the Madison Police Department regarding its investigation.

MWH Law Group was hired in January to conduct an investigation into the discovery of hidden cameras in an East High School coach’s office. Upon completion of the investigation, the firm recommended the district fire staff involved in the installation request — something the district said it was considering in May. The district has not yet said whether staff were reprimanded or fired in connection with the incident. 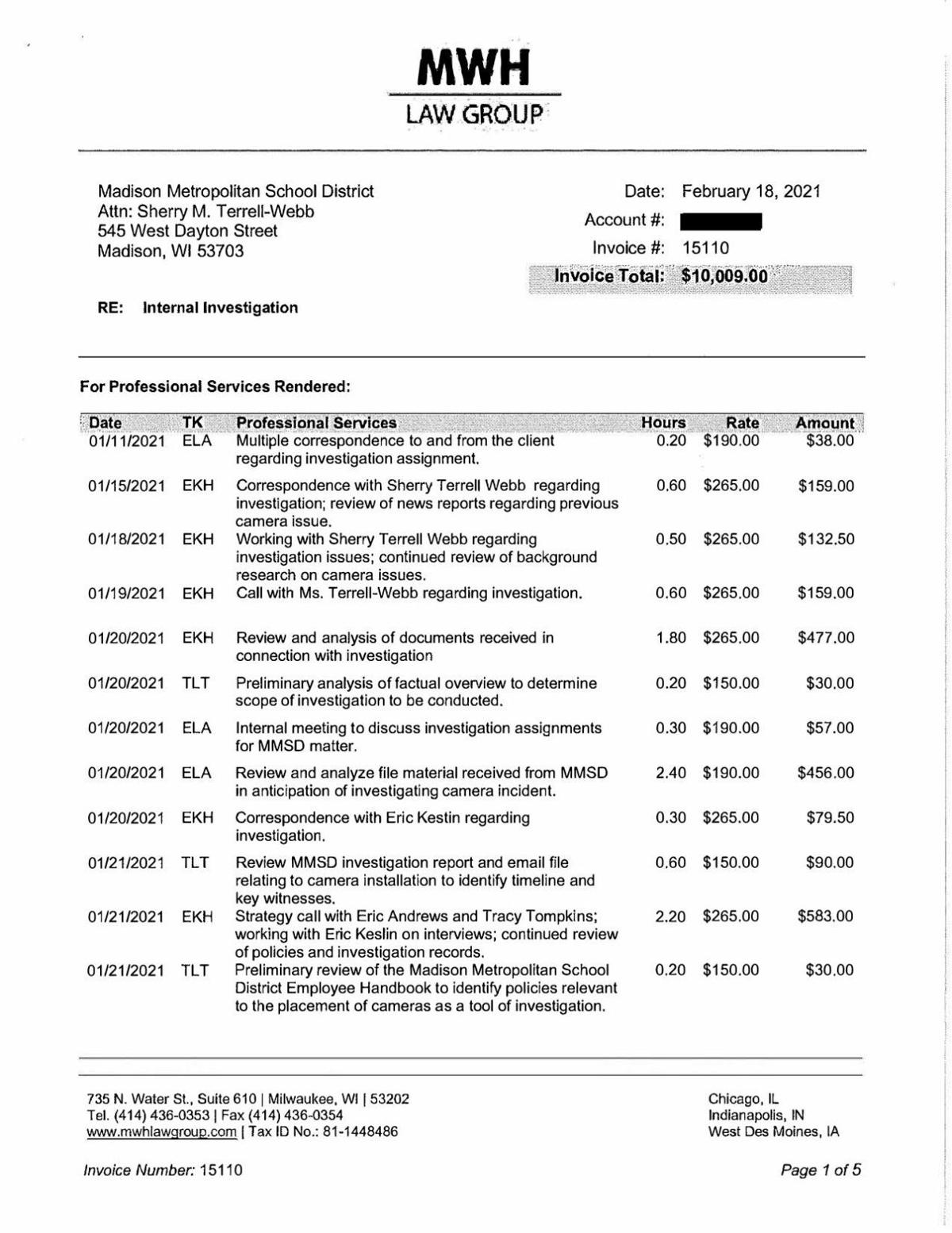 The district said the third-party investigation found the camera installation request and approval was to monitor a third-shift custodian who was suspected of sleeping on the job. The installation, which violated district policy, resulted in one camera being placed in a locker room coach’s office aimed at a couch and another camera aimed at a cot in a room where students with disabilities changed, news that sparked outrage among special-education advocates.

In January, a member of the high school security staff discovered what appeared to be a smoke detector cover that had been altered to house a recording device in the coach’s office. The staff member contacted the school principal, who then contacted district officials and law enforcement.

Upon further investigation, it was discovered the camera may have been installed in the smoke detector with the approval of district staff in September 2019 in an effort to document “an employee discipline issue related to work rule violations,” according to a statement released by the district.

The district hired MWH Law Group after the Madison Police Department finished its investigation into the incident in February. Police determined no crime had been committed. District spokesperson Tim LeMonds had previously said the district does not plan to release the full third-party investigative report, citing attorney-client privilege.

The incident has no apparent connection to another hidden camera incident. In that case, former East High School business and marketing teacher David M. Kruchten has been charged with transporting seven minors to Minnesota in 2019 with the intention of creating child pornography and attempting to create child pornography by planting hidden cameras in their hotel rooms.

The State Journal discovered, through an open records request in April, the district paid about $8,000 for a third-party investigator to review its actions involving the Kruchten case. The district denied an additional open records request for the full third-party investigative report, citing attorney-client privilege and student privacy concerns, as well as the ongoing criminal case against Kruchten.

"We're considering those recommendations," Tim LeMonds, district spokesman said Thursday, though he declined to name employees who could be disciplined in connection to the incident.

District staff, community say janitor monitored by cameras at East High was 'targeted based on his race'

The use of hidden cameras has been used against custodial staff "on numerous occasions," according to a letter signed by district staff and community members.

The two hidden cameras found at Madison East High School were inside of a room where students with disabilities changed and in a coaches' office in the boy's locker room, but it does not appear students were ever watched.

The cameras were installed in violation of Madison School District policy to monitor a custodian suspected of sleeping on the job.

"I am outraged a policy of this nature would be violated," Superintendent Carlton Jenkins said. The district has launched an investigation into the matter through a local law firm.

Hot stretch over, showers and storms expected to move into southern Wisconsin on Wednesday

Showers and storms that have been hitting northern and central Wisconsin are expected to move to southern Wisconsin on Wednesday, as clouds and cooler weather replace sun and heat, according to forecasters.

Brendan Kearney had also been a teacher and assistant principal at the school.

The Madison School District announced the hire a new principal for East High School Thursday, after former principal Brendan Kearney told parents in an email last week that he will not return for the 2021-22 school year.

“The high school girls felt tremendously violated and are still dealing with those emotions,” attorney for the nine plaintiffs Jeff Scott Olson said. “What you would expect a responsible school district to do is to be relatively transparent when addressing the situation.”

The parents allege their students' civil rights were violated by the district and 11 employees.